City Press under the spotlight; or, when newspapers become news 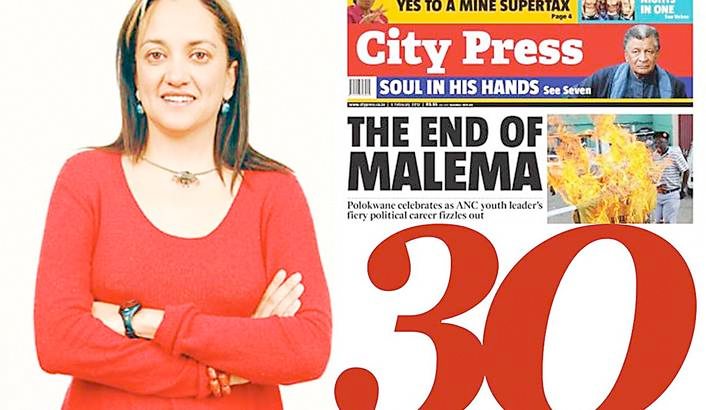 Information on the inner workings of newsrooms will always attract attention, especially when the issue is transformation. After a City Press dispute, the Economic Freedom Fighters (EFF) are calling for the suspension of editor Ferial Haffajee. The public and bizarre newsroom drama, however, runs much deeper: a visit to the same newsroom and a report from ANN7 hardly helped clear the confusion. By GREG NICOLSON.

The public dispute started with a discussion on the future of City Press. Over Tuesday and Wednesday the newsroom met to look at where the publication is going and how journalists can improve their work. The strategy session was meant to “future proof” what has been ranked the most influential newspaper in South Africa, according to Haffajee, who is widely respected in media and before arriving at City Press was editor of Mail & Guardian.

On Wednesday night she tweeted: “I don’t tolerate white racists, so what makes black racists any different? Today, I drew a line in that sand. Two sides: one awful coin.” And: “So easily does the oppressed become the oppressor. Not under my watch. Sorry.”

In a letter to staff, published in The Media Online, she explained her position and called the strategy meeting “dated and small minded”.  Haffajee railed against the racialising of the newsroom for journalists’ own agendas. “Mostly, I object to the naked racism on display yesterday. I object to the racist mauling that Tash [news editor Natasha Joseph] and Nicki [assistant editor Nicki Gules] came in for. They are a transformative desk – the very best of the desks I have ever appointed in my editing years,” she wrote.

“I object loudly to the racist view that only a black editor can get political stories through calls from black African politicians. For one, I am black and African and will not live under your imposed identity on me. As to your views of our political connection, it is insulting and rubbish. I’ve disproved that many times in my reporting life as do our colleagues almost every week when they get scoops. I don’t buy into this racism and never will.” On multiple occasions ­– addressing concerns on the publication’s content on the ANC, President Jacob Zuma, and City Press’s focus on successful black South Africans – she told staff to “lump it”.

Haffajee threw down the gauntlet to dissatisfied journos and said she is committed to non-racialism and non-sexism and refuses to kneel to “cultural imperialists”. “Every week, I get about 10 applications from people who want to come and work with us because they love City Press’s values, journalism and vision. I would like the opportunity to work with people who want to be here. If you don’t like it, be brave and make the space for them and go and work somewhere where racism, superiority and reverse baaskap are allowed and revered.”

Reports that six black journalists who had challenged Haffajee were suspended drew criticism. “In essence, she took internal matters of City Press to the public domain, thus indirectly silencing the accused,” said EFF spokesperson Mbuyiseni Ndlozi on Thursday. “It is for this reason that City Press must take harsh action on her, particularly because it is matters of racial discrimination which we all know find much greater expression in those spaces that have to do with the discipline of language like papers and academia.”

On Sunday at EFF’s Marikana launch Julius Malema targeted City Press in his comments on transformation in the media. “Black journalists […] I see you in numbers,” he said. “I know you are using the pen to advance the revolution but I know also that the editorial rooms are not transformed […] Your work is undermined by young boys and girls.” Malema said black journalists are pushing transformation but are being undermined by the white editors and owners restricting them and editing their copy (with a specific reference to recent changes in the City Press structure).

Responding to tweets on Thursday, Haffajee said City Press has eight editors – five black and three white with an equal split between male and female, and a total of 68% black staff. Earlier she wrote: “Listen up: nobody’s been suspended. Any journo can come over, talk to any of us – we have our debates in public, we don’t kill each other.”

Daily Maverick arrived at the Naspers offices soon after and went to Haffajee’s cubicle, large but not cordoned off from the rest of the staff. Her tweets were general, she said, and didn’t put company business in the public domain. She didn’t elaborate on the EFF comments but said Malema had called for her head on multiple occasions. Then she suggested I talk to the staff.

The City Press newsroom is smaller than you might think. A racially diverse group sat working. Past City Press covers and other newspaper headlines dotted the walls. Most of the journalists were surprised the story had blown up and the publication had become a news item. The media attention blew it out of proportion, they said. Many of those I spoke to said City Press has an amicable work environment and expresses a diverse range of views.

The grievances started with the discussion on City Press’s future. First came a discussion on the present, an honest look at what’s happening. Some journalists felt the news desk is too white and fails to give expression to stories in black communities in certain provinces and the townships.

One editor, specifically mentioned by Haffajee as coming under attack in the meeting, said there are not instances where a story has been rejected because it relates specifically to a black experience. The meeting was calm, despite the media reports suggesting otherwise, said the staff member, who felt the newsroom expresses a diverse range of views but recognised that issues of transformation are important and deep-felt.

Staff members defended Haffajee. They said her strong stance was necessary to get journalists in line. “Where’s the conflict?” they asked, as if it would be on display when a journalist from another publication comes during a sensitive period.

One journalist said the frank discussion was beneficial. When a “family” is open and everyone explains how they feel it can create tension, and interest from the neighbours, but it will ultimately benefit that family, said the staff member.

Another said it simply wasn’t the time to raise the issues. Either the staff members should raise their issues at another time through the correct channels or they can leave, was the blunt statement, echoing Haffajee’s tough stance.

But still, the tension was clear. The University of Witswatersrand’s recent State of the Newsroom report found City Press has a wide appeal across the country and shows a high level of diversification and has done well with transformation. More broadly however a recent Print & Digital Media SA report found, “The position of blacks generally and black women in the management and control of companies as well as in the boardrooms is dismal.” The industry has recently seen a number of white editors appointed to top positions and both the untransformed nature of ownership and the appointment of editors no doubt complicate issues at City Press, which itself has been experiencing changes since attempting a significant shift to broaden its appeal yet continues to decline in circulation. Many of the issues touch on demographics, race, and trying to survive in a declining market.

“We’re seeking legal advice,” said one of the employees who was unhappy with how Haffajee responded to some of the black employees’ concerns. Sources complain that the appointment of white editors means the publication fails to understand certain cultural intricacies and promote stories relevant to black South Africans. “We’re drawing a line in the sand against oppression,” said the employee.

The employees said they want to follow the correct procedure and would not comment further on the issues. On Thursday evening, ANN7’s Twitter account reported a criminal charge has been filed against Haffajee for suspending the outspoken employees. Neither the suspensions nor any news of charges (or what they might be) could be confirmed. “It’s their right to do so,” said Haffajee, in the standard diplomatic tone of the day, who had only just heard reports of the supposed charges, over the phone.

The question now is how this stunning affair will resolve itself. Will Haffajee be able to rebuild her team at City Press and pursue her vision for the paper, or has the incident irrevocably damaged relationships? Will there be a spillover into newsrooms at other big media houses where discontent over transformation is bubbling under, or is it a storm in a teacup? And how much of a role do political players have in this matter? There are many who would like to see an incident like this disorientate the media industry and distract its watchdog role in society, right in time for 2014 elections. However the City Press dispute plays out, that should not be allowed to happen. DM