Marikana Commission: Chronicle of death foretold and planned for by SAPS 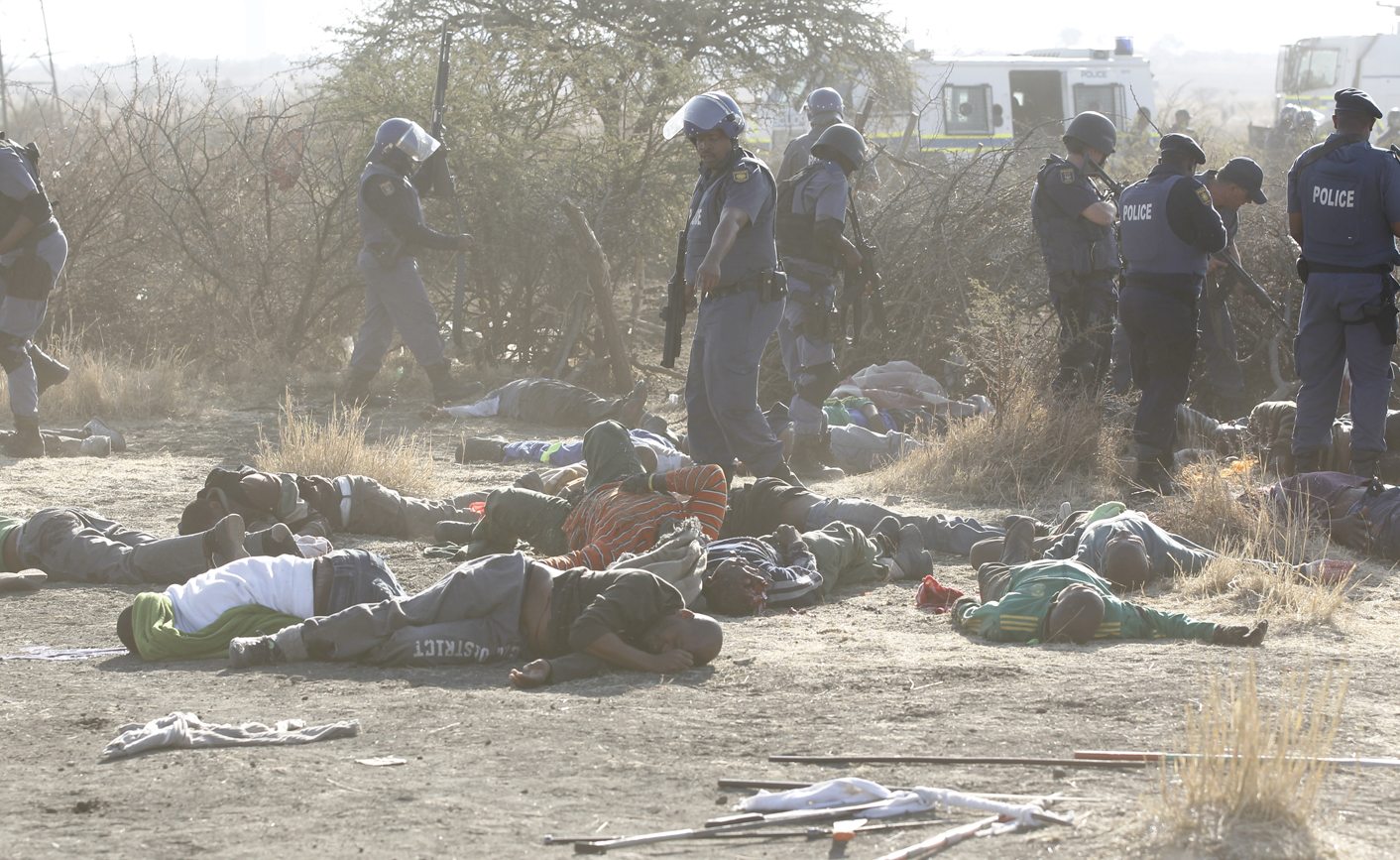 While Monday’s news on the Marikana Commission of Inquiry focused on the funding of the injured and arrested mineworkers, important details of how police prepared for their disperse-and-disarm strategy emerged at the Commission itself: before the killing of 34 striking miners, police asked for four mortuary vans and an arsenal of live bullets. By GREG NICOLSON.

The Phokeng Government Mortuary occurrence book on August 15 2012 starts with a hanging. Ominously, August 16 notes a request. The handwriting records a request from a Colonel Madoda, of the police national office, for mortuary vans to be sent to “Marikana police station for any disaster that can occur during the Marikana/Lonmin strike”. The entry is timed at 08:30. That afternoon 34 striking miners were killed by police in Marikana and another 78 injured.

The Commission resumed on Monday after a two-week adjournment after evidence implicating police in a cover-up had emerged. Evidence presented showed how the police had concealed sensitive information that might have embarrassed the SAPS or incriminated them and their role in the killings. The Commission broke to study the thousands of documents that had emerged after Lieutenant Colonel Duncan Scott had handed over police hard drives. The evidence leaders continued to cross-examine Scott on Monday.

Exhibits were presented from mortuary workers and officials showing that police sensed there would be casualties in their attempts to end the strike, which had been continuing for a number of days and had already claimed 13 lives.

“Col Classen informed me that they are going to close down the miners at the koppie in Marikana and requested four mortuary vehicles to be sent at Marikana,” said the area’s district coordinator in an affidavit. Only one vehicle was available, but each mortuary van holds three to four bodies, said Advocate Matthew Chaskelson for the evidence leaders.

Evidence suggests that during the morning of the 16th police were determined to end the strike that day. On Monday, the inquiry also heard that over 4,000 live rounds of ammunition for R5 rifles had been delivered as ordered by police on the 16th.

“On arrival we found Colonel Madoda of the police and he informed us that we must park there for call up if something has happened,” said another forensic pathology worker’s affidavit. “We parked there until at about 16:00 we were called to Nkaneng.”

“Later in the evening at about 18:00 we advanced to the scene and that’s when I started seeing the bodies lying on the ground. The police were busy investigating the scene, taking photographs. We stood there for the whole night before we can start collecting bodies,” added the mortuary worker.

Chaskalson questioned Scott on the matter. The mortuary had been contacted, he said, because police had planned to “close down” the violent strike.

Scott said Klasson (whose name was misspelled in the affidavits) was a tactical response team officer from Katlehong but he couldn’t recall an officer called Madoda, mentioned in multiple affidavits from the forensic pathologists.

Advocate Chaskalson said the “late notes suggest that August 16 was D-day. They also suggest that if the miners did not leave voluntarily, SAPS would move to the tactical response phase.” Police minutes from the day indicate an attempt to disarm and disperse but don’t mention the escalation that would require thousands of rounds of live ammunition and mortuary vans.

TRT Captain Monwabisi Joseph Ntlati’s affidavit says of a briefing at 14:30: “During the briefing we were informed that the National Management instructed that the Police must act against the armed strikers as they have to be disarmed and dispersed.  The POP members were to disperse the strikers and TRT will encircle small groups and disarm them (strikers).”

The diary of another caption says, “Today is the day we take back our street and restore peace.” His entry for the 16th notes multiple meetings with the top commanders at Marikana, but doesn’t mention any mortuary vans or requests for heavy ammunition.

Brigadier Suzette Pretorius’ minutes of the events offer some insight, but also fail to show any reference to what plan of action would require vans from the morgue and so many R5 bullets (though it must be said 13 people had already died, including two police officers). The plan was for Association of Mineworkers and Construction Union (AMCU) leaders to have agreed to a solution with management at the Lonmin mine, but they failed, Pretorius says. She describes how Scott, tasked with creating a plan to solve the situation, went to brief the commanders of the multiple police units shortly before the shootings. He showed a presentation on his laptop.

The evidence leaders are set to argue that what has been presented to the Commission does not add up. It seems the SAPS were prepared for multiple deaths as they were determined to end the strike on the 16th, and yet there is little record of those plans in their own diaries. As the evidence leaders continue to pressure Scott, and with the return of the injured and arrested mineworkers’ legal team, things seem like they are getting worse and worse for the SAPS case.

In September, it emerged that police had not submitted all their evidence. As the Commission continues, the extent of the cover-up is unravelling. In this long, protracted process, hopefully, the truth will unfold. DM

Photo: A policeman gestures in front of some of the dead miners after they were shot in Marikana, August 16, 2012. REUTERS/Siphiwe Sibeko