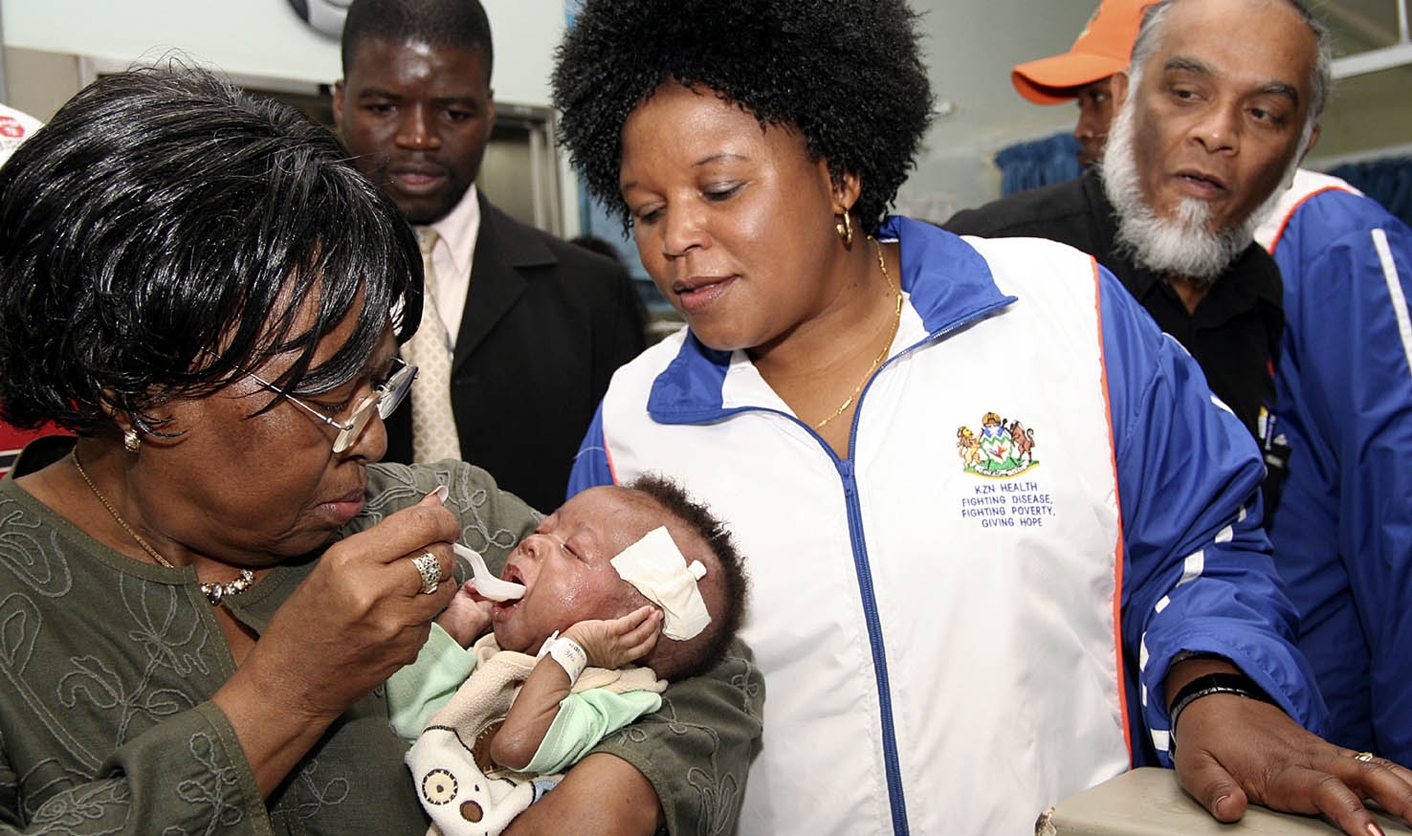 AIDS activists had to pinch themselves this week when an old skeleton came clattering out of the denialism coffin to land a key position in the KwaZulu-Natal provincial government. The mention of Neliswa “Peggy” Nkonyeni’s name sends shivers down many people’s spines, transporting them back to the dark days of garlic, beetroot and other quack remedies to treat HIV. By ANSO THOM.

One of former and now departed health minister, Dr Manto Tshabalala-Msimang’s, right-hand women, Nkonyeni completed a five-year stint as Health MEC in KwaZulu-Natal, then as Speaker in the legislature, a term marred by allegations of serious corruption (withdrawn later) only to go full circle with this week’s announcement that she is to become the custodian of education in the province. As she takes over the future of KwaZulu-Natal’s children, let’s remind ourselves of Peggy Nkonyeni career trajectory so far:

As early as 2005, barely a year after becoming KZN Health MEC, Nkonyeni criticised the World Health Organisation for failing to provide “a clear message on the role of nutrition in delaying the progression of HIV to AIDS”.

During the WHO meeting Tshabalala-Msimang had suggested that with the right diet, people with HIV could permanently delay the onset of AIDS. In 2008, Nkonyeni made headlines when she had a bruising battle with rural doctors in the province’s Umkhanyakude district.

Doctors had been trying for most of 2007 to get the provincial department to give the go-ahead for the introduction of dual therapy for the prevention of mother to child HIV transmission.

After he had raised private funds to buy AZT for desperate patients, Manguzi hospital doctor, Colin Pfaff, was charged for “willfully and unlawfully, without prior permission of (his) superiors (rolling) out dual therapy to the pregnant mothers and newborns”.

After huge protests, the charges against Pfaff were later withdrawn but relations between rural doctors and the health department had been severely strained.

Shortly afterwards, Nkonyeni visited Manguzi and made disparaging remarks about some rural doctors. Speaking in isiZulu while doing a tour, she accused rural doctors of being concerned with money not patients. She also claimed that AZT was toxic (she would repeat this mantra many times) and that antiretroviral medication had bad side effects, especially for children, a clear dig at Pfaff.

This so incensed one of the doctors, Mark Blaylock, that he tossed a photograph of Nkonyeni into a dustbin (an act he apologised for later). In turn, Nkonyeni used her Budget speech and a number of media interviews to portray Blaylock as a racist.

In an attempt to prove her claim, she took two professors, a surgeon, a pathologist and an urologist out of their workplaces for ten days to examine “racism, ill treatment of staff and abuse of departmental facilities by Dr Blaylock and some doctors operating at some of our rural facilities”.

The accusation that Blaylock was “racist” did not hold water as he had for years been serving the country’s poorest patients, all black, at both Manguzi and Edendale hospitals.

Controversy continued to dog Nkonyeni. Earlier, in 2009, the 120-bed Dream Centre hospice was shut down. The official explanation for the hospice’s closure was that government subsidies had been suspended due to allegations of corruption.

However, it was later revealed that Nkonyeni had earlier approached management at the centre to run a pilot programme using an untested traditional medicine, Ubhejane. This expensive concoction was peddled by one Zeblon Gwala, a former truck driver, who claimed his ancestors had given him the recipe in a dream.

The plan was for traditional healers who were opposed to antiretroviral medication to prescribe the traditional medicine Nkonyeni had recommended.

At the time Nkonyeni had introduced Traditional Healer Organisation head, Nhlavana Maseko, to centre management. Maseko was a controversial figure in her own right who had entered into an alliance with German vitamin seller, Matthias Rath. She also frequently condemned anti-retrovirals.

Nkonyeni’s plans gained a lot of traction and even led to the establishment of a University of KwaZulu-Natal task team to work with Dream Centre staff on a plan to integrate traditional and western medicine. Gwala was at the time a prominent member of the task team.

Nkonyeni also hosted a small closed meeting with traditional healers, which was addressed by Tshabalala-Msimang. Delegates at the meeting were given books and pamphlets condemning ARVs and doctors who prescribed it. A number of the books were authored by Rath.

Relations between the health department and Dream Centre soured dramatically after Nkonyeni’s plans were leaked and management backed off. This was the real reason behind the closure of the Centre.

Nkonyeni remained an enthusiastic supporter of Ubhejane with many reports that she encouraged HIV-positive people to take the dark, herbal concoction. In December 2008, while still in her post as MEC, the Scorpions arrested and charged Nkonyeni and five others with corruption, fraud and racketeering involving the unnecessary purchase of equipment at hugely inflated prices.

She later denied that she had been under pressure to sign a deal in order to ensure a donation to the ANC.

A few months later Nkonyeni was appointed Speaker of the KwaZulu-Natal legislature. The charges against Nkonyeni were dropped in September last year shortly after President Zuma appointed advocate Moipone Noko as the acting Director of Public Prosecutions in the province.

After Nkonyeni had vacated the health post and new appointments had been made to key positions, the KwaZulu-Natal Department of Health announced, for the first time in more than a decade, that the department had remained within budget.

Part of the turnaround plan to achieve financial compliance involved taking swift action against corrupt staff members who had embedded themselves under Nkonyeni. By the end of June, 377 cases of fraud and corruption had been recorded.

Nkonyeni is a dedicated member of the ANC and a staunch Zuma supporter. She also serves as the provincial treasurer.

There is published evidence that AIDS denialism in South Africa caused the unnecessary death and suffering of millions. These are actions for which no politician has ever been held accountable. It is also well known that KwaZulu-Natal has been one of the hardest hit provinces with families decimated and children orphaned and infected by HIV.

Many generations will be paying the price for the state sanctioned denialism of which Nkonyeni was an enthusiastic cheerleader. The last thing the school children of KwaZulu-Natal need is an incompetent and denialist MEC. DM

Thom is responsible for special writing and media projects at SECTION27. Some information sources from Health-e News Service www.health-e.org.za