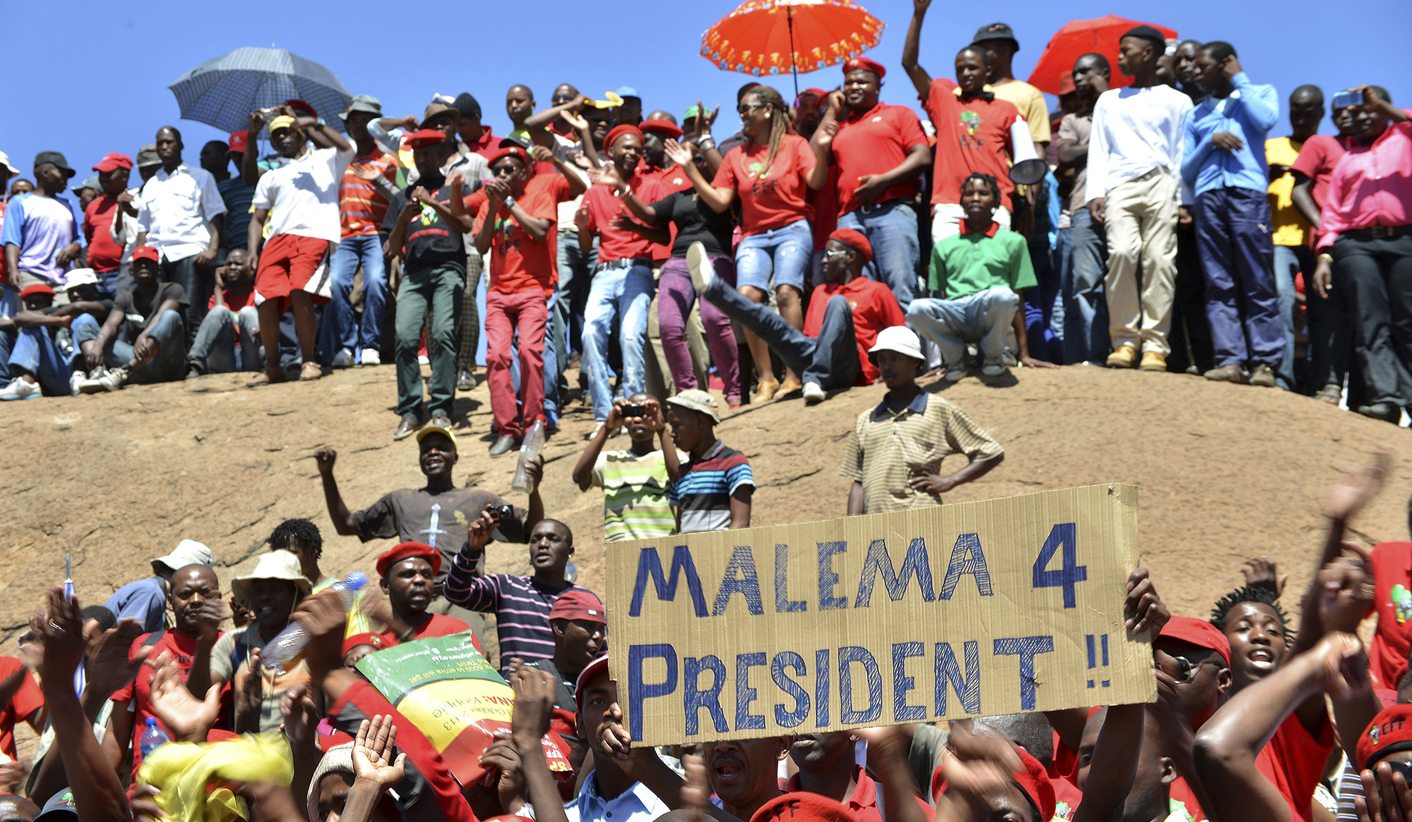 Around 15,000 people gathered in Marikana on Sunday for the official national launch of Julius Malema’s Economic Freedom Fighters. Malema was at his best, weaving insults to his former ANC comrades with humour and calls for a radical transformation of the economy. He has visited the Marikana community many times after last year’s massacre and now hopes to reap the political benefits: the party announced it would first target North West in its quest to rule the country. By THAPELO LEKGOWA & GREG NICOLSON.

“A different baby is born today, a giant,” said Malema, painting a picture from a political/sci-fi/horror flick, “A child that walks immediately, the baby that fights for your living wage. You must be afraid of that child.”

He spoke largely on the disparities associated with race and wealth. “You killed people when you took the land that was the price we were willing to pay. We cannot pay you for killing our people,” he told the crowd, clad in EFF’s signature red berets. “When you took the land you committed black genocide […] We are not threatening you with white genocide. We will never commit a white genocide, unlike you when you committed a black genocide. Until today you are refusing with the land […] You are not ashamed to release the land and for having killed our people. You want us to kneel before you to ask for the land of our ancestors […] We are not ready to do that. We are not ready to beg for our land.”

There was a dig at last week’s Red October march against the killing of white South Africans. “You march here in South Africa and say whites are being killed,” said Malema. “I still want to see these whites that are being killed in SA.” Sure to infuriate those protesting the murder of white farmers, he continued, “Your grandfather and fathers stole the land… hand over the stolen property by your father and grandfathers.”

Photo: Supporters of the Economic Freedom Fighters (EFF) gather during the official launch of the political party in Marikana, where 34 miners were shot dead by the South African police in August last year, near Rustenberg October 13, 2013. REUTERS/Mujahid Safodien

Malema was the key speaker of the event, which followed months of EFF organising since its recent launch. During the August commemoration of the Marikana massacre, Malema was one of the most popular speakers, and his fellow Fighters Floyd Shivambu and Kenny Kunene (who has since left the party) were seen greeting mineworkers at the infamous koppie in the lead-up to the event. Last week, Malema was rallying support while travelling around the region. “Africans, let us reconcile,” he changed tone. “There can’t be reconciliation during a rugby match only, and after the rugby it’s back to reality,” said Juju. “There will never be long-lasting peace while there is no justice.”

The event featured a number of messages of support, most notably from UDM leader Bantu Holomisa, who enjoys support within Marikana and in the Eastern Cape, where many of the mining community have roots. “Thank you Juju. Your launch was a resounding success. Congrats,” Holomisa took the time to write on Facebook after the rally. His support may indicate the possibility of a coalition between EFF and UDM in next year’s national and provincial elections.

“Refuse to vote for a singer and dancer. We want a thinker to drive the policy of our country,” said Malema, a jab at President Jacob Zuma’s groovy moves and skills on the microphone. “We do not want an old man who dances like a teenager. Every time he dances older people look down with shame,” he added. (One presumes Juju sees himself as the intelligent, non-dancing alternative, and not Agang SA leader Mamphela Ramphele, former vice chancellor of the University of Cape Town.) “We must restore the image of South Africa,” Malema said, calling for voters to choose a statesman in 2014 rather than Zuma, who he apologised for helping to win the 2009 election.

EFF aims to fill the gap in the left of politics, vacant in the current scene dominated by the ANC and Democratic Alliance. The party, which received its registration certificate last week from the Independent Electoral Commission, has continued to espouse the ideas of the ANC Youth League, which was under Malema at the time, on nationalisation of the mines, land and other key sectors. EFF’s manifesto is styled on Marxist-Leninist rhetoric combined with ideas from revolutionary socialist vanguards.

“White South Africans like EFF because they tell you the truth,” Malema told the boisterous crowd. The truth is that in many regards South Africa’s poor got a bad deal since the end of Apartheid and millions feel the ANC’s promises have not been delivered. Malema is shouting that to the heavens, and in Marikana, at least, it seemed people were listening to “the baby that fights for your living wage”. The 2014 fight is truly on. DM

Main photo: Supporters of the Economic Freedom Fighters (EFF) chant slogans during the official launch of the political party in Marikana, where 34 miners were shot dead by the South African police in August last year, near Rustenberg October 13, 2013. The sign is in support of party leader Julius Malema. REUTERS/Mujahid Safodien