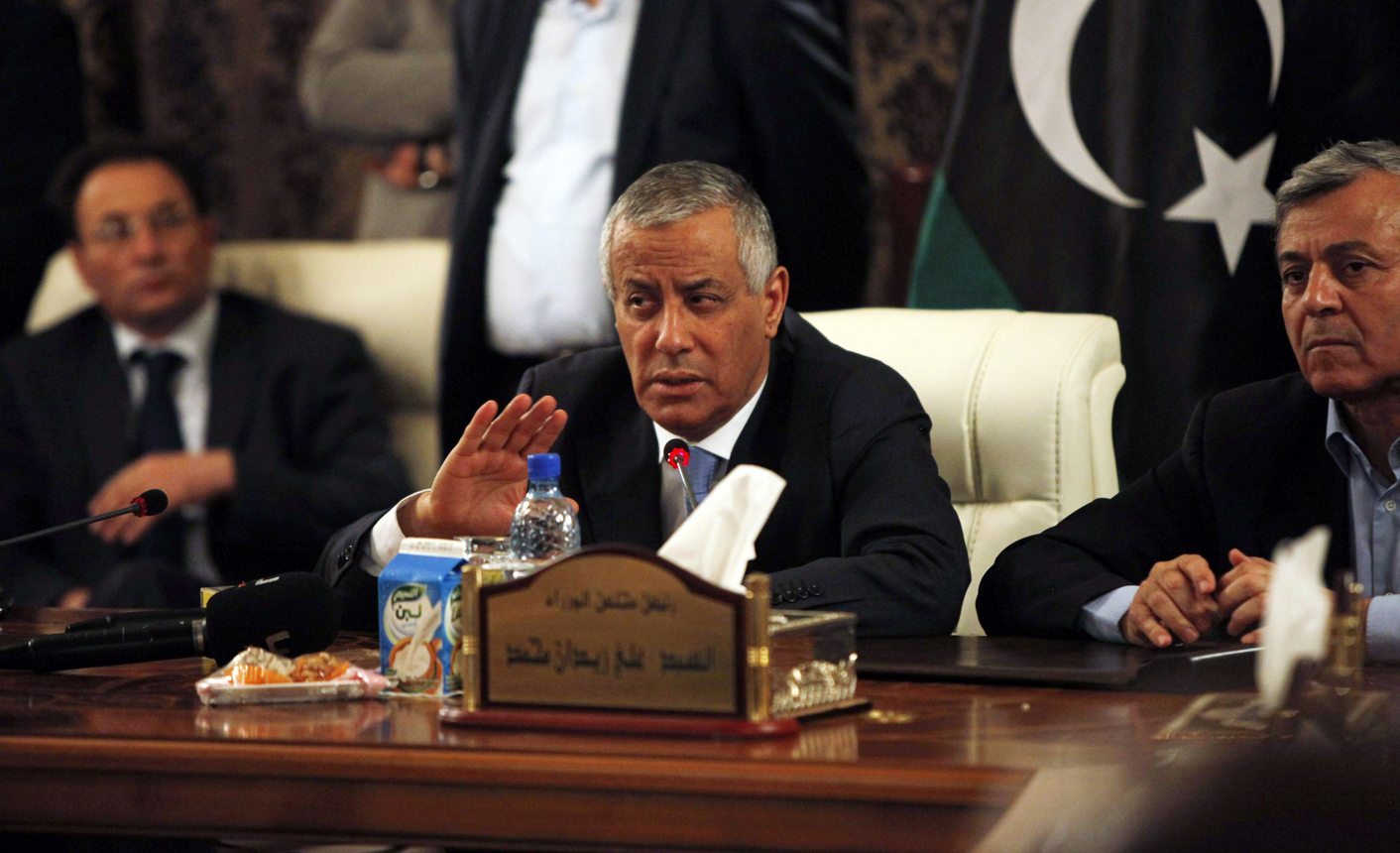 With Libya sliding into anarchy - its prime minister was briefly kidnapped by militiamen on Thursday - Western countries are repeating their commitment to help the North African country complete its transition to democracy after its 2011 revolution. By Myra MacDonald.

But they have few good options to back up those promises beyond hoping the Libyan people themselves can eventually agree on a system of governance to reduce fighting between the country’s many ethnic, tribal and regional factions.

Without an authoritative government, Western allies have no clear partner for the central plank of their strategy to stabilise Libya – training Libyan security forces to guard key installations, cities and the country’s desert borders with Egypt to the east and Algeria to the west.

The risk is that they could encourage new militias or bolster the one part of the state that controlled those security forces at the expense of others, potentially undermining the messy democratic transition even further.

France and Britain, prime movers behind the Western intervention to support the revolt against Muammar Gaddafi, were quick to pledge support for Prime Minister Ali Zeidan after his capture on Thursday.

But NATO Secretary General Andres Fog Rasmussen said the defence alliance was still considering how to meet an earlier request by Zeidan for help in training security forces.

Speaking at a news conference in Brussels, he said there were “some considerations as to how the security situation will impact on any possible NATO assistance”, but did not elaborate.

Britain’s Ministry of Defence said training would begin once planning had been finalised and Libya had selected recruits. “We anticipate that this will be early next year,” a spokesman said.

A U.S. defence official said talks were still in the planning phase with no final decisions made. The intent would be to provide military training outside Libya, rather than to send large numbers of trainers to work inside the country.

White House spokesman Jay Carney said the United States would “continue to work closely with the Libyan government as it continues to build its capacity to deliver security and good governance to the people of Libya” but stopped short of making any specific promises of fresh assistance.

SHARING OUT POWER AND OIL

Libya has so far been unable to agree on a new constitution to distribute political representation among its competing regions and cities and rival tribes and ethnic groups and, crucially, to share out the country’s oil and gas resources.

Zeidan also faces a possible vote of no confidence and Libya’s transition assembly, the General National Congress, is crippled by divisions between the secular National Forces Alliance and the Muslim Brotherhood.

The authority of the central government has been particularly challenged in the east, where protesters saying they are protecting Libya’s oil from corrupt elites have closed ports and threatened to sell oil for their Cyrenaica region.

But Zeidan’s kidnapping from a luxury hotel in the capital Tripoli highlighted the extent to which splits within Libya cannot be divided into neat groups, for example by region or tribe, but run through the city and even the government.

The gunmen who kidnapped Zeidan – who said they were angered by the weekend capture by U.S. special forces of an al Qaeda suspect in Tripoli – were themselves associated with the fragmented Libyan security apparatus.

Libyans, meanwhile, have not only to agree a democratic process but to build a state – Gaddafi worked hard to ensure there was no real state to challenge him, keeping Libya off-balance and fractured after seizing power in a 1969 coup.

At the same time, al Qaeda and its allies are taking advantage of the chaos to buy weapons, win recruits and send men to Syria to join al Qaeda-aligned rebels against President Basher al Ass, Western and regional security sources say.

Libyan weapons have been smuggled into Egypt, helped Islamist fighters overrun parts of Mali before a French-led military operation earlier this year and were used in an attack on an Algerian desert gas plant, the sources say.

The prime minister’s kidnap showed how bad things had got.

“No one has been paying attention to how fragmented Libya is, how bad the militia situation has become,” a former U.S. national security official said. “Now it’s become obvious.”

Yet for all the concern, western allies have few military options, especially at a time when Washington is curbing spending and President Barack Obama has tried to keep the United States out of new wars after more than a decade of conflict in Afghanistan and Iraq.

U.S. military officials said earlier this week the United States would move about 200 Marines to a U.S. base at Single-lane, Italy, from one in Spain to respond to any crises after its raid in Libya.

The Marines are part of a special force created after last year’s attack on the U.S. consulate in Benghazi, Libya in which ambassador Chris Stevens and three other Americans were killed.

But U.S. defence officials made clear its remit was to respond to limited crises that threaten U.S. government officials and citizens in the Mediterranean region, including North Africa.

The potential for drone strikes likewise remains very limited. Used in Pakistan’s tribal areas bordering Afghanistan and in Yemen to target Islamist militants linked to al Qaeda, they are not designed to restore stability in a complex civil conflict like the one in Libya.

The United States operates unarmed surveillance drones in the region from a base in Niger to the south of Libya but as yet there seems to be no move to introduce armed drones.

Without a military solution, officials acknowledge the best hope for the West is to let Libyans continue the tortuous process of establishing a democracy, to offer technical expertise where possible to build state capacity, and to use intelligence to contain the threat from al Qaeda.

Geoff Porter, from North Africa Risk Consulting, said the situation in Libya was “not completely catastrophic” given that Libyans were still seeking to negotiate among themselves, albeit often at the end of a gun.

They had little appetite for a new dictatorship and the prime minister’s eventual release, he noted, fitted a pattern for resolving grievances. “The goal is not confrontation,” he said. “The goal was to negotiate.” DM

Photo: Libya’s Prime Minister Ali Zeidan (C) addresses a news conference after his release and arrival at the headquarters of the Prime Minister’s Office in Tripoli October 10, 2013. Zeidan was seized and held for several hours on Thursday by former rebel militiamen angry at the weekend capture by U.S. special forces of a Libyan al Qaeda suspect in Tripoli. REUTERS/Ismail Zitouny