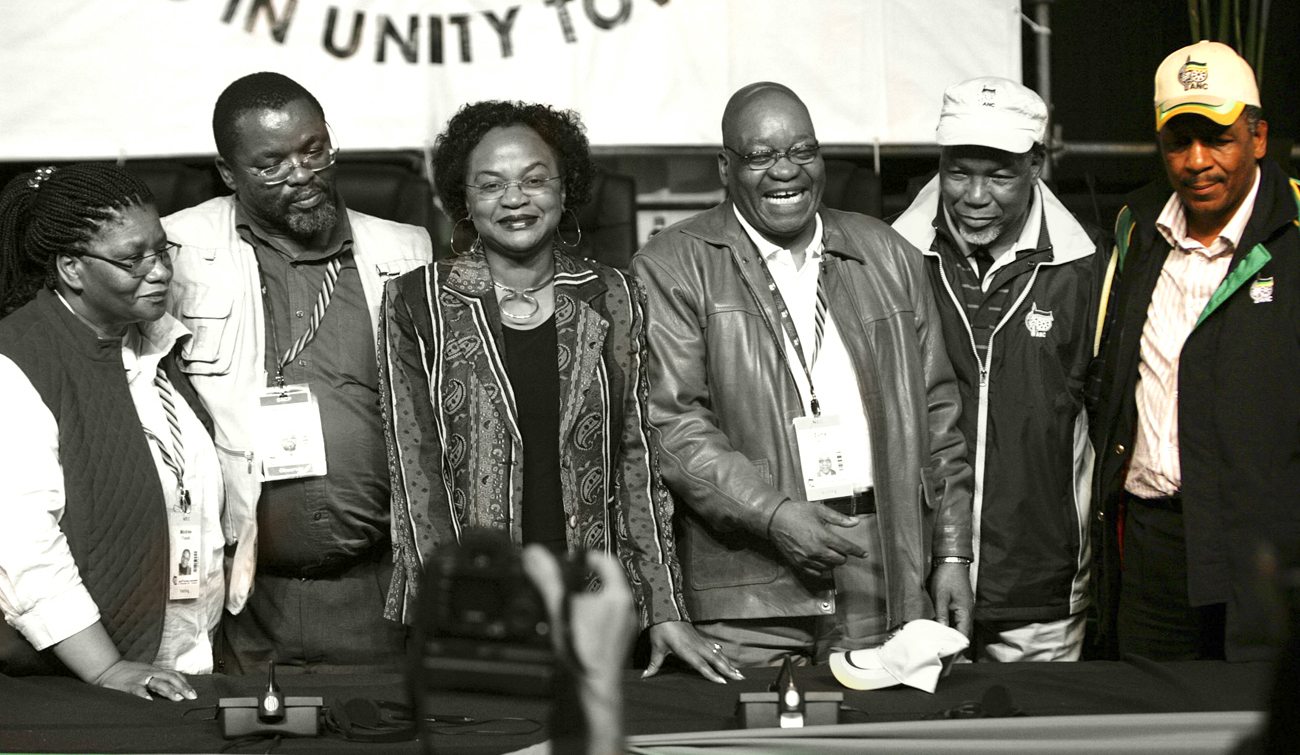 Former ANC treasurer general Mathews Phosa this week joined a line of politicians who discover their moral conscience after finding themselves outside the ANC or active politics. In the belly of the beast, everyone is a team player; once they are out in the cold, however, they are suddenly able to see the weaknesses and failings of the political leadership they were part of. Few people are able to resist the temptation to preach from the political grave. After next year’s election another batch of people are likely to be released into the wilderness, where they can mount their soapboxes. But for now, they are content and silent as VIPs. By RANJENI MUNUSAMY.

When it comes to voices from the political grave, FW De Klerk is the undefeated champion. The last president of Apartheid South Africa is able to, without any shame or fear of being seen as hypocrite, stand and condemn the ANC government on issues such as affirmative action and transformation – all of which seek to undo the legacy of statutory discrimination he upheld throughout his career in politics. He has even had the cheek to accuse President Jacob Zuma of fomenting racial divisions. Apparently De Klerk succumbing to the inevitable collapse of Apartheid now gives him a licence to denounce a democratically elected government representing the will of the majority of South Africa’s electorate.

By comparison, the resurrection this week of Mathews Phosa is quite innocuous. After a 10-month absence from the political scene after the ANC’s Mangaung conference, Phosa surfaced at a conference hosted by the Ahmed Kathrada Foundation. In the speech delivered at the conference and in media interviews afterwards, Phosa was more forthright than he had ever been as a member of the ANC’s top six.

In the speech, Phosa said the ANC could no longer “blame the past, Apartheid, race and other external factors” for the slow pace of service delivery. “Let us begin by making sure that every rand of public money that is spent makes a tangible impact on development and upliftment of our people.”

He said many South Africans were restless and disenchanted with the pace of transformation. He also condemned the ANC for failing to deal decisively with its leaders facing corruption charges that brought the party into disrepute in “a devastating and shocking fashion”.

“It has never been ANC policy for anyone to steal public money. Anyone doing that satisfies his or her own greed at the expense of the nation, and to the lasting detriment of a party that commanded the respect of the entire globe,” Phosa said.

In an interview with Talk Radio 702 the following day, he ventured where many in the ANC fear to tread. “I don’t think anybody has tried to justify Nkandla. I think there is a bit of a cover-up and I think we need to know the truth, and the sooner we know the truth, the better,” Phosa said.

From 2007 to 2012, Phosa sat in every national decision-making structure of the ANC as national treasurer and therefore a member of the party’s top six. He had significant influence over what was happening in the ruling party and government by virtue of that position. During that period, Phosa made no real effort to speak out against poor service delivery, corruption and wastage of taxpayers’ money.

If he had spoken out, and meant it, he could have had some influence on the way the ANC and government operated. Instead he watched in silence as Cabinet ministers splurged on cars, houses and overseas trips. Phosa said nothing about the “restless and disenchanted” as service delivery protests bubbled up all over the country, when he could have marshalled people and resources to address the problems.

Now he has noticed them.

And when exactly did Phosa notice Zuma’s renovated complex at Nkandla? It is not as if it was built or revealed in the past 10 months since Mangaung. The scandal about the taxpayer having to foot the bill for the R206 million ‘security upgrade’ at the president’s private residence broke while Phosa was still sitting around the table with Zuma at Luthuli House. His prick of conscience and determination to “know the truth” as soon as possible could easily have been placated, had he asked the questions then.

But the only things Phosa did then to go against the grain were to defend Julius Malema and run against the Zuma camp for the position of ANC deputy president. None of these actions were motivated by the noble principles he now speaks of. In fact, during his time as national treasurer, Phosa was rather coy about the functioning of Chancellor House, the ANC’s investment arm, and claimed the media had a “fetish” with it, constantly asking questions about the deals in was involved in.

Now, Phosa is a flag-bearer for transparency.

“If we want to avoid being consigned to the dustbin of history, we must be demonstrably more decisive, more transparent and totally unforgiving in how we deal with those who steal public money, or abuse positions of trust,” Phosa said in his speech.

But Phosa is not alone in preaching like a born-again evangelist. Many of the leaders of the Congress of the People (Cope) are able to speak liberally now about the failings of the ANC government when they served in the party’s national executive committee and in Cabinet not too long ago. Cope leader Mosiuoa Lekota often invokes fury from the ANC benches in Parliament when he rails against actions or decisions of the ruling party. He seems to suffer no discomfort when ANC MPs shout, “You took that decision as Minister of Defence”, or “You were sitting on this side when that happened”.

Former Intelligence Minister Ronnie Kasrils is a staunch critic of government now. He has served in government from 1994, first as a deputy minister of defence and then Minister of Water Affairs, before taking up the intelligence portfolio in 2004. This means he was in Cabinet when government was sticking to its catastrophic stance on Aids and when state security services were being used to fight political battles.

But Kasrils rediscovered his conscience after leaving government when Thabo Mbeki was recalled in 2008. In the new edition of his book Armed and Dangerous: My Undercover Struggle Against Apartheid, Kasrils states:

“These gains [in government delivery], however, have been offset by a breakdown in service delivery, resulting in violent protests by poor and marginalised communities; gross inadequacies and inequities in the education and health sectors; the ferocious rise in unemployment; endemic police brutality and torture; unseemly power struggles within the ruling party that have grown far worse since the ousting of Thabo Mbeki in 2008; an alarming tendency to secrecy and authoritarianism in the government; meddling with the judiciary and threats to the media and freedom of expression. Even Nelson Mandela’s privacy and dignity are violated for the sake of cheap photo opportunism by the ANC’s beaming top echelon.

“Of utmost concern is the increasing dysfunction of the state machinery, maladministration and incompetence at national, provincial and municipal levels because of the practice of appointing unqualified cronies to senior posts. Lack of leadership is starkly illustrated in such matters. Such scandals as the non-delivery of textbooks to schools; the wasteful expenditure of more than R200-million on security at President Jacob Zuma’s Nkandla home and the manner in which the Gupta family, current favoured transnational corporate pals of our president, are making South Africa look like a banana republic.”

Although all of these arguments are valid, raising them now as an ordinary citizen and pensioner has no impact whatsoever. Had he intervened when he was in a position of power to stop the showdown between Mbeki and Zuma, many of the things he now bemoans could probably have been avoided.

There are of course hazards to speaking out. Former Cabinet minister and ANC veteran Kader Asmal was insulted and demeaned for speaking out on issues like the Protection of State Information Bill and the conduct of ANC leaders. But in death he was hailed as a hero who spoke truth to power.

Cosatu general secretary Zwelinzima Vavi is now fighting for his political life because he refused to be silenced on issues of corruption, government splurges and service delivery failures. He is one of the few people who would have a credible voice outside the alliance as he was not afraid to speak up when he was inside.

After next year’s elections, there will be a number of people who will lose their positions in Cabinet and Parliament, with new faces being introduced. As a result there will a new crop of people who might suddenly see the light on the ANC’s failures and shortcomings. The desire for political survival and desperation to keep their positions of privilege keep them muzzled for now.

But history does not remember the invisible, and modern-day verligtes, as Phosa discovered this week, make great sound bites. But not much more.

There are those whose perspectives have significance and weight but will not speak. Thabo Mbeki and Kgalema Motlanthe are among those who either chose to grind their teeth in silence or are so nuanced in their viewpoints that they are almost imperceptible.

It remains to be seen how much active participation the two former presidents have in the ANC’s election campaign and whether they will publicly give their blessing to Zuma’s second term as SA president.

South Africa was fortunate to have a true moral guardian who was never afraid to speak truth to power, no matter how uncomfortable these truths were. Nelson Mandela’s words and example still resonate and provide a guiding light for good leadership. It is pity, though, that those who follow in his footsteps chose to hear his words selectively. DM