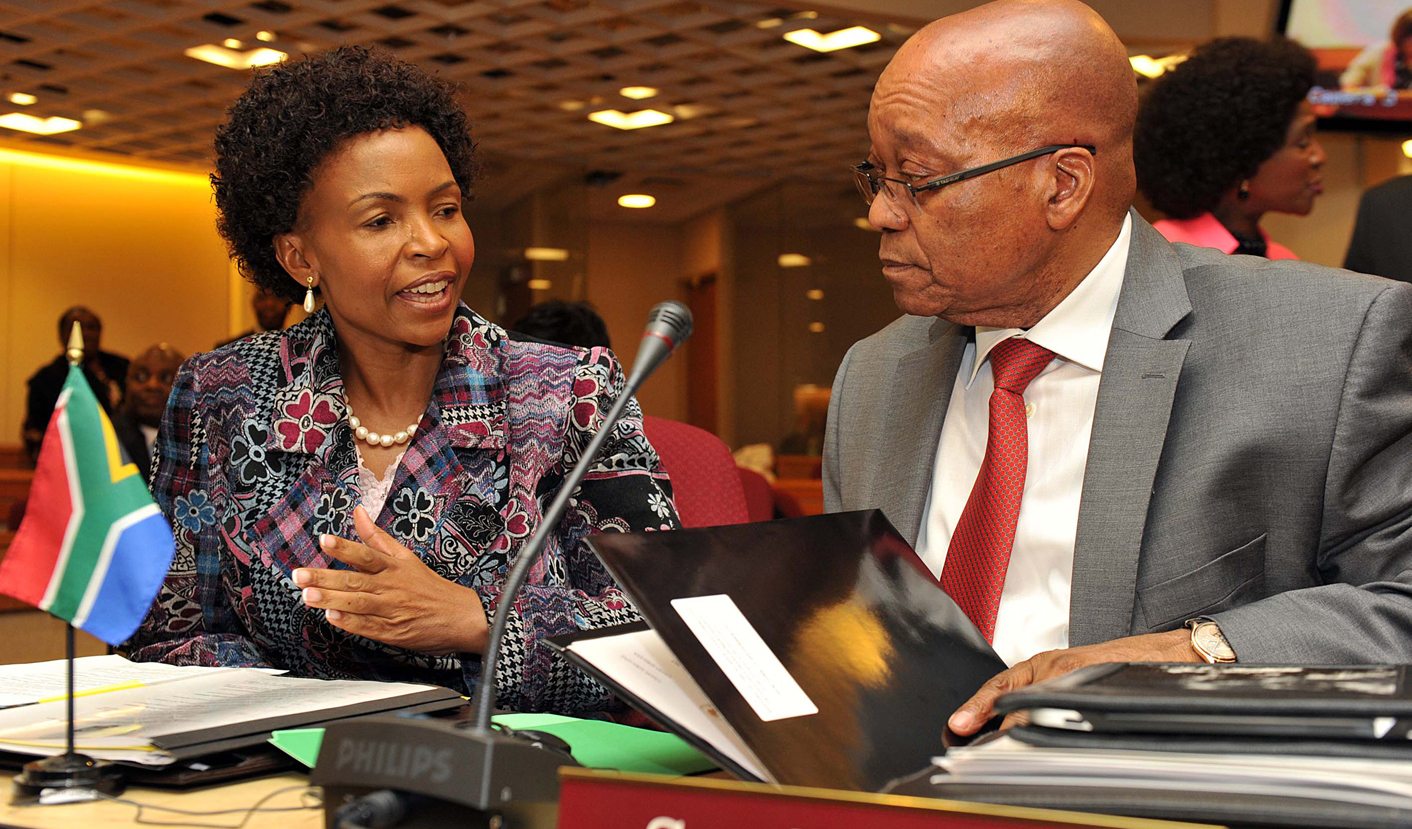 South Africa has refused to divulge whether it will withdraw from the Rome Statute if presented with the choice at an African Union Summit this weekend. A declaration of absolute support for the ICC - or a statement of intention to withdraw - might pre-empt the discussions in Addis Ababa. Or so says the Minister of International Relations and Co-Operation. By KHADIJA PATEL.

It remains to be seen how exactly President Jacob Zuma will pronounce South Africa’s stance on the International Criminal Court this weekend. The African Union is set to discuss the court and its alleged bias against African states at an extraordinary summit. Minister of International Relations and Co-Operation, Maite Nkoana-Mashabane, was reticent when queried about South Africa’s actual position on the matter.

Addressing a media briefing in Pretoria on Tuesday, Nkoana-Mashabane said the African Union was within its rights to review its relationship with the Court.

“South Africa is going to that meeting to participate fully aware of the developments that are taking place,” she said.

The minister said South Africa had listened “to genuine complaints” about the ICC.

“So, allow us to go, meet, discuss and exchange views, ideas, come out of the extraordinary summit outcomes. We will not hype them. They will be declared openly for the world to hear and see,” Nkoana-Mashabane said.

A press briefing with the minister would, however, be incomplete without her trademark cheekiness.

“Do I give you the outcome of the summit before the summit sits?” she asked before answering her own question.

Cheekiness aside, Nkoana-Mashabane sought to stress South Africa’s prominence in the AU.

“South Africa is an African country. We are an integral member of the African Union,” she said.

That importance to the AU has been underscored by South Africa’s inclusion in Brics, an inclusion that Nkoana-Mashabane says reflects “a changing global order”.

“We are witnessing changing global order and the past year has seen positive developments in the context of peace and development where the international community is starting to reap the benefits of Brics’s insistence in upholding the integrity of the United Nations Charter in respect of security and development,” she said.

However, this changing global order may be assessed in how French President, Francois Hollande, is received at the Union Buildings on next week. Hollande has enjoyed far more cordial relations with Zuma than his predecessor, Nicholas Sarkozy.

Still, diplomatic commentary posits South Africa and France as rivals currying favour with other African states to further the ambition of their respective foreign policies.

Nkoana-Mashabane played down the alleged rivalry between South Africa and France.

“We actually don’t have any declared enemy anywhere in the world but we do have far more intensive relations with other countries like France,” the minister said.

She claims the independence of South Africa’s foreign policy assists to diffuse differences that may arise with countries like France.

“When there are tensions we sit around the table. We use mechanisms at our disposal to thrash out those,” Nkoana-Mashabane said.

The greatest source of tension between South Africa and France was said to have come from France’s alleged opposition to the election of Dr Nkosazana Dlamini-Zuma to the position of chairperson of the AU commission.

Nkoana-Mashabane said these allegations were misplaced as French counterparts had expressed neutrality with regard to the election of the AU Commission chairperson.

“They [the French] told us that they were neutral,” she said.

And yet what went unsaid in these assurances of where the French stood on Dlamini-Zuma’s election to the AU Commission, are allegations that South Africa fielded its own candidate for the job to thwart French influence on the AU.

And, as Hollande lands in South Africa with a business delegation in tow, Nkoana-Mashabane and her colleagues in government will certainly be smoothing over any disagreements with the French next week.

After all, France is South Africa’s third-largest trading and investment partner within the European Union.

But while South Africa’s relationship with France on prickly issues on the continent will outstrip Hollande’s visit, at the core of these squabbles with France are the aspersions cast on South Africa’s actual clout in Africa, with its inclusion in Brics as a case in point.

“Are we serious players in Brics?” Nkoana-Mashabane asked, adding, “Brics members think so and they act so.” DM

Photo: President Jacob Zuma is seen with Minister of International Relations and Cooperation Maite Nkoana Mashabane at the start of a UN High Level Panel meeting constituted by the UN Secretary-General last year to develop the post-Millennium agenda in New York in the United States, Monday, 23 September 2013. Picture: GCIS/SAPA