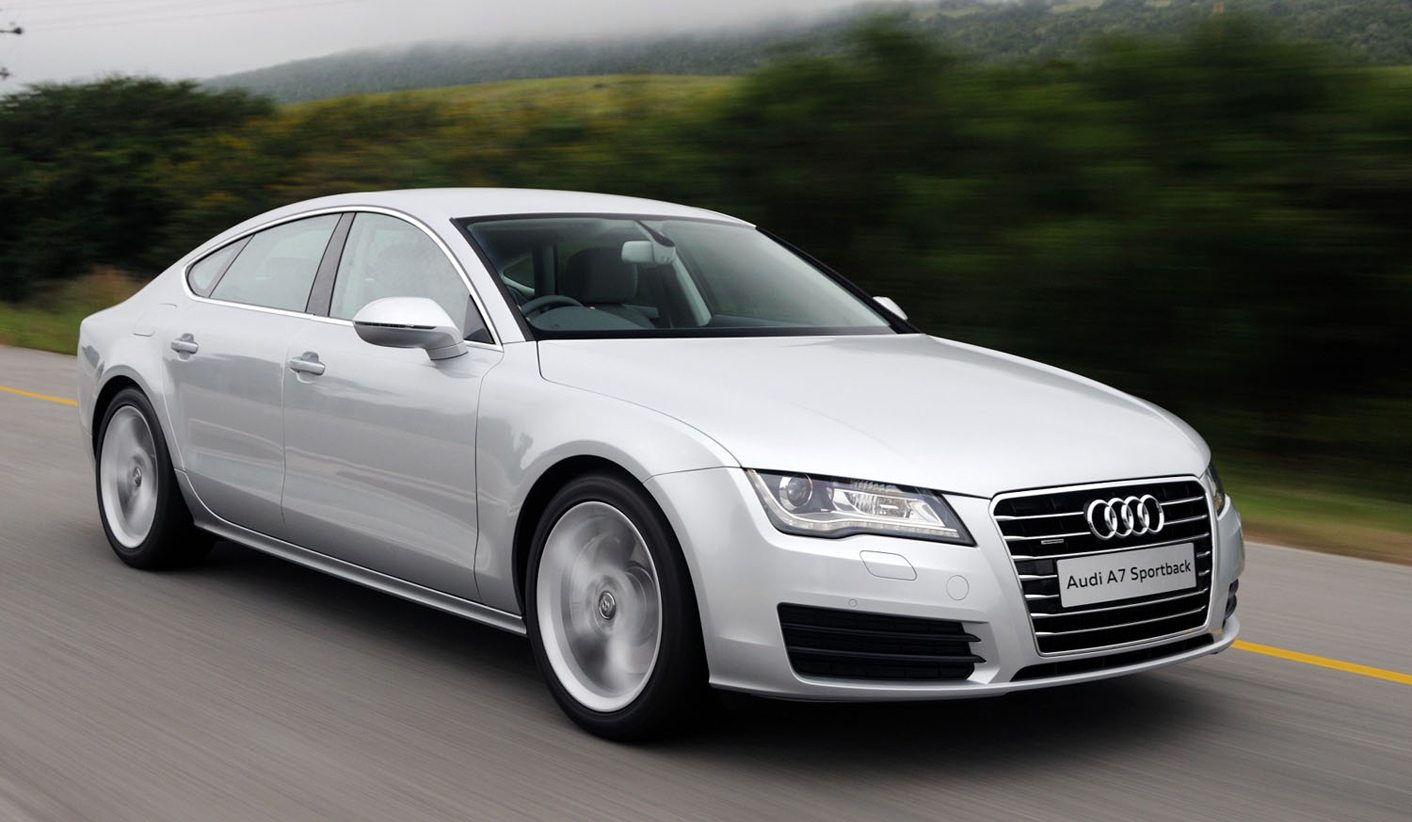 The concept of the so-called four-door coupé remains a contradiction in terms. You don’t need to be a car buff to know that coupés have two doors, and sedans have four. The Audi A7 Sportback competes in an increasingly crowded four-door coupé space, but while it’s the sleek fastback’s design that usually turns heads, you’ll find the latest A7’s centrepiece under the bonnet. By DEON SCHOEMAN.

You can blame Mercedes-Benz for establishing the modern four-door coupé segment. It launched the first-generation CLS way back in 2004, and changed the face of premium motoring forever.

Perhaps the prestigious marque wanted to add some lustre to the somewhat mundane W112 E-class that the CLS was based on. More likely, it saw an opportunity to combine coupé-like exclusivity with four-door ease of use in a unique package.

The result wasn’t pretty, thanks in part to a droopy rear and a banana-curved waistline, but it proved popular enough to establish a brand-new genre.

Today, Merc is already on its second-generation CLS, while both BMW and Audi have entered the fray – BMW with its 6-Series Gran Coupé, and the Audi A7 Sportback. Even Volkswagen has a representative in the form of the Passat CC.

But are these cars really coupés? Call me old-school, but in my book a coupé should have two doors, an attractive, wind-cheating shape, an interior focused on the two front seat occupants – and lots of dynamic talent.

The Audi A7 Sportback is only one of several examples in a burgeoning four-door coupé market, suggesting that the motoring public is quite happy to take a less than purist stance on the coupé-or-not-subject. And since its local debut in early 2011, the initial A7 range has more than doubled to five, with the über-alles RS7 performance flagship yet to arrive here.

So let’s accept then that four-door coupés are now considered an established niche (or even sub-niche). But even so, you either love them, or hate them.

At least, the A7 Sportback looks the sleek and streamlined part, even if there’s no concealing the fact that it is a large car. Fortunately, the proportions are just right, creating a fastback four-door that oozes class, but also promises a measure of dynamic intent.

Which brings me to the latest addition to the A7 clan. It may not look any different to the current-generation car, bar the wheels and badges, but it may well turn out to be the most intriguing A7 Sportback yet. And yes, it’s the engine that hogs the limelight.

However, the most recent addition to the A7 clan may also prove to be its most intriguing member. And for once, it’s the mill lurking under that long, prow-like bonnet that is the real star here.

Diesels are nothing new, not even in the premium car context. In fact, anyone who still considers turbodiesel engines old-fashioned and agricultural has been fast asleep for the past two decades or so.

As the BiTurbo model name implies, this A7 is powered by a new, bi-turbocharged 3.0-litre V6, which uses two turbos mounted in tandem. The first, smaller one spins up at start-up, allowing instant response, huge shove from near idling speeds, and no lag.

When that turbo runs out of breath, bigger-brother turbo number two smoothly takes over, extending boost up the rev range, and sustaining urge and shove until the V6 finally runs out of enthusiasm in the mid-5000s.

Power and torque maximums are impressive at 230kW and 650Nm respectively, but it’s the linear power delivery and total absence of turbo lag that really impresses. It really feels like a much larger, normally aspirated mill, with none of the peakiness or unruly boost that can spoil the turbo party.

Let me also mention at this point that the V6 TDI Bi-Turbo doesn’t sound anything like a diesel either. Instead, the sonorous baritone develops an edge that is more eager than any TDI has any right to be, thanks in part to some acoustic engineering to the exhaust.

With so much torque on offer, the A7’s transmission sensibly combines an eight-speed Tiptronic automatic with quattro all-wheel drive. The auto box is as smooth or as rapid-fire as you want it to be, and in sequential manual mode, you can use the shift paddles behind the steering wheel to change gear.

The wheel continues the high-tech theme with its multifunction execution, while the remainder of the switchgear exudes the authentic solidity and high-tech precision Audi is renowned for.

For all its coupé aspirations, the cabin is very much a four or even five-person space. There’s plenty of room front and rear, and the appointments are first class, thanks to a standard spec list that ticks most of the important options.

Even the boot, accessed via the large, but thankfully motorised, tailgate, will swallow a family’s luggage with an almost guilty ease, suggesting that long-distance cruising needs to be added to this A7’s skills summary.

As it turns out, the TDI BiTurbo feels every bit as quick as its considerable output stats promise. Boot it from standstill in full auto mode, and the gears will cycle with almost rapid-fire intensity while the A7 reels in the horizon.

It may have a turbodiesel heart, but that doesn’t stop the A7 Sportback BiTurbo from being a very rapid machine. It aces the 0 to 100km/h sprint in just 5.3 seconds while top speed is limited to 250 km/h.

Despite a suspension prioritising cruising comfort, the A7’s road manners are surprisingly agile. The turn-in is progressive, rather than truly crisp, but the all-wheel drive means the A7 will stick to the chosen line with an assured neutrality. And even when pressing on, the Audi looks and feels unruffled.

Does that make this latest A7 Sportback a strong contender for four-door coupé stardom? Well, let’s consider that, despite Audi’s best efforts, the A7 Sportback is more smart, streamlined fastback than coupé.

Let’s also acknowledge that this latest 3.0 TDI V6 BiTurbo has perhaps the finest drivetrain this side of an S7 or an RS7 – an engine that is smooth and muscular, with high power and torque reserves if you need them.

So, as much as everyone, including Audi, wants you to think of cars like the A7 Sportback as a four-door coupé, consider it a sleek and sophisticated sedan with real individuality to set it apart from the normal four-door crowd.

In that context it makes a lot more sense, while the 3.0-litre bi-turbodiesel V6 adds effortless dynamics that suit the A7’s personality to a tee. The result? A spacious premium car with real class and distinction on its side.