Soccer: A protest too far?

Soccer: A protest too far? 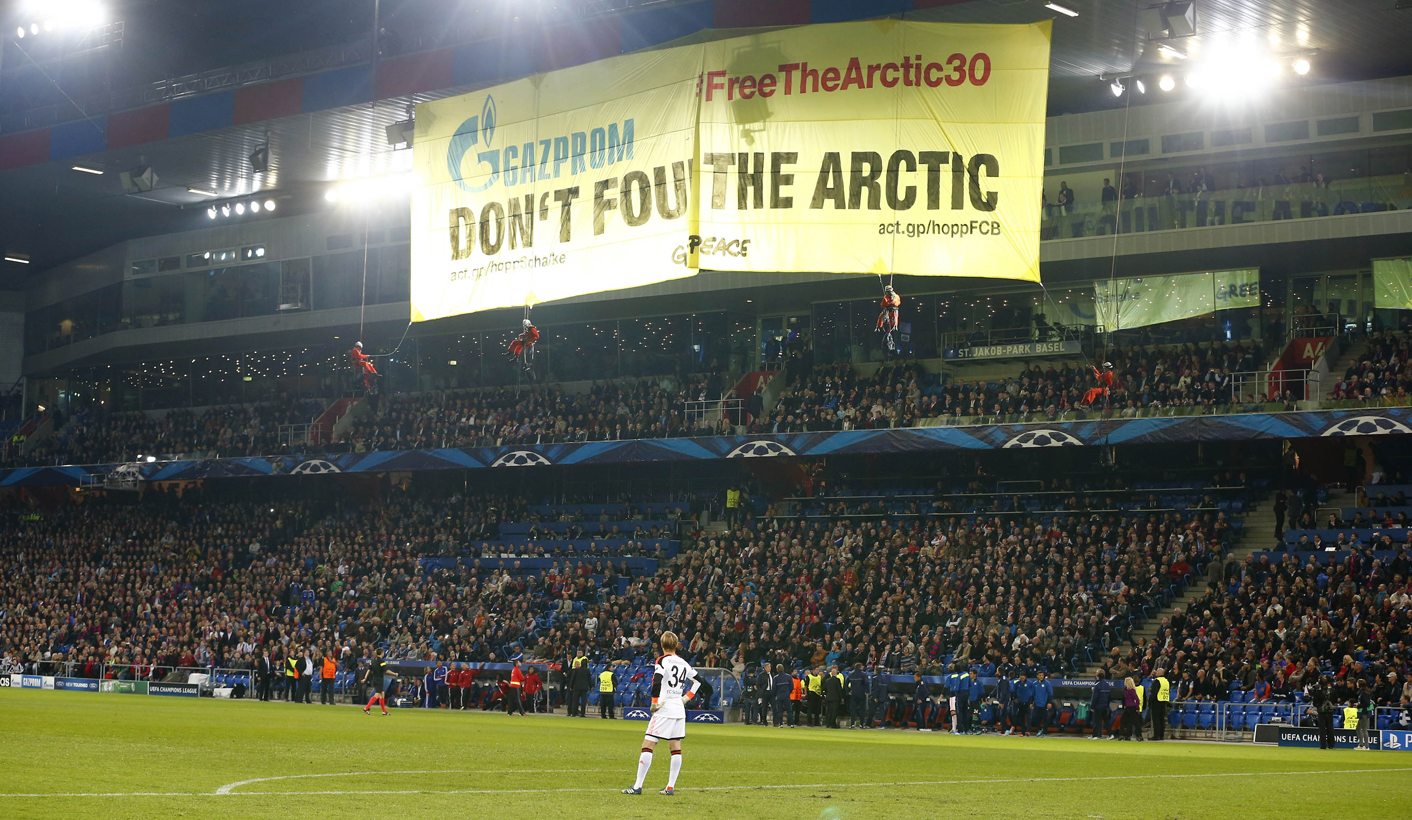 Two unrelated incidents on Tuesday night, one in protest the other an unprovoked attack, served as a reminder that football treads such a fine line between being considered the beautiful game and a pastime for misbehaving thugs. By ANTOINETTE MULLER.

On Tuesday night in Switzerland, Greenpeace managed a “peaceful” protest of tremendous proportions. In a Champions League game between Basel and Schalke 04, something quite unusual happened. People in boiler suits, construction hats and all, abseiled down from the roof of  St. Jakob-Park. They unveiled a 28-metre banner which read:  “Gazprom, don’t foul the Arctic” and “Free the Arctic 30”.

The protest was against Gazprom, a Champions League and Bundesliga sponsor. Thirty members of Greenpeace were detained by Russian authorities for being on board an icebreaker, the Arctic Sunrise, recently. The group tried to break up attempts to scale an offshore oil platform, run by Gazprom. The members have remained in custody since being detained on 18 September and piracy charges have been laid against them.

Greenpeace have been making a noise about the issue for a while, but decided to pounce in a way which would grab the attention of the world while on the biggest stage in the world. It looked like something out of a movie, and although players tried to ignore it and carry on, play had to be stopped for four minutes. Stewards meandered around, seemingly dumbstruck by what they were seeing, and the protesters removed the banner themselves after a short while of hanging about in the air. As protests go, it was all very civil.

What is dumbfounding is how exactly four people managed to get so much equipment into a stadium. How did they manage to simply get past security looking like they were about to go abseiling? How did they get onto the roof and set up their kit without anyone noticing? While Greenpeace are, well, peaceful, and were very much so in their protest, this complete lack of security doesn’t exactly inspire confidence in the security forces who should be protecting fans from any kinds of threat.

Basel could be fined and face disciplinary action for their lack of awareness of it all. Even if Greenpeace’s message had its merit, no club should have security so slack that a stunt like this could be pulled off. Surely?

It’s not the first time the organisation pulled off a cunning protest at a sporting event, though. A few weeks ago, at the Belgian Grand Prix, they snuck two remote controlled banners into the venue and as the racers took to the podium, they were unveiled in front of them, again with the message: Save the Arctic. It wasn’t nearly as dramatic as the protest in Basel, and would have been far easier to activate than the operation that took place in Switzerland.

The possibility that there was an insider at the club who assisted the protesters cannot be ruled out. But the powers that be should investigate the matter properly and ensure action is taken in order to prevent anything similar – or anything more threatening – happening in the future.

In another country not very far away, there was another kind of protest. In North London, a number of Napoli ultras had made their way to the Emirates. The group had been hanging around the stadium since the early afternoon, drinking and generally looking suspicious. A short while before kick-off, the group descended on Holloway Road (the road running parallel to the Emirates) and attacked a pie shop where around 50 clients, including women and children, were enjoying some pre-match food and drink. The attack was unprovoked, unnecessary and cowardly. It put one patron in hospital after he had his head open. The Napoli ultras have a notorious reputation which precedes them, perhaps because their acts are often so cowardly. Their mere presence is enough to chill you to the bone, because of deeds committed in the past.

On the night and once in the stadium, there was little concern. Other than being loud and obnoxious and looking menacing, the Napoli fans were rarely noticed. Policing, something which is often rightly criticised for being overly harsh, ensured that the instigators were kept in their place.

Two unrelated incidents on the same night have shown that football can be used as a vehicle for reason and calm while at the same time serving as a vehicle of anarchy for those who only want to cause harm.

Football is one of the biggest stages in the world. It is often held up as a mirror for society, it is used to carry messages, lead protests and serve as a force for social change. Whether that is St. Paulli fans fighting for their left-wing cause or the story of how political prisoners on Robben Island turned to soccer to find hope and dignity.

The incidents on Tuesday were another reminder of why the game so often toes the line between being taken seriously as something which can positively inspire others on one hand, and nothing more than a pastime for troublemakers on the other. DM