In Durban’s Cato Manor: Death by protest, death by dissent 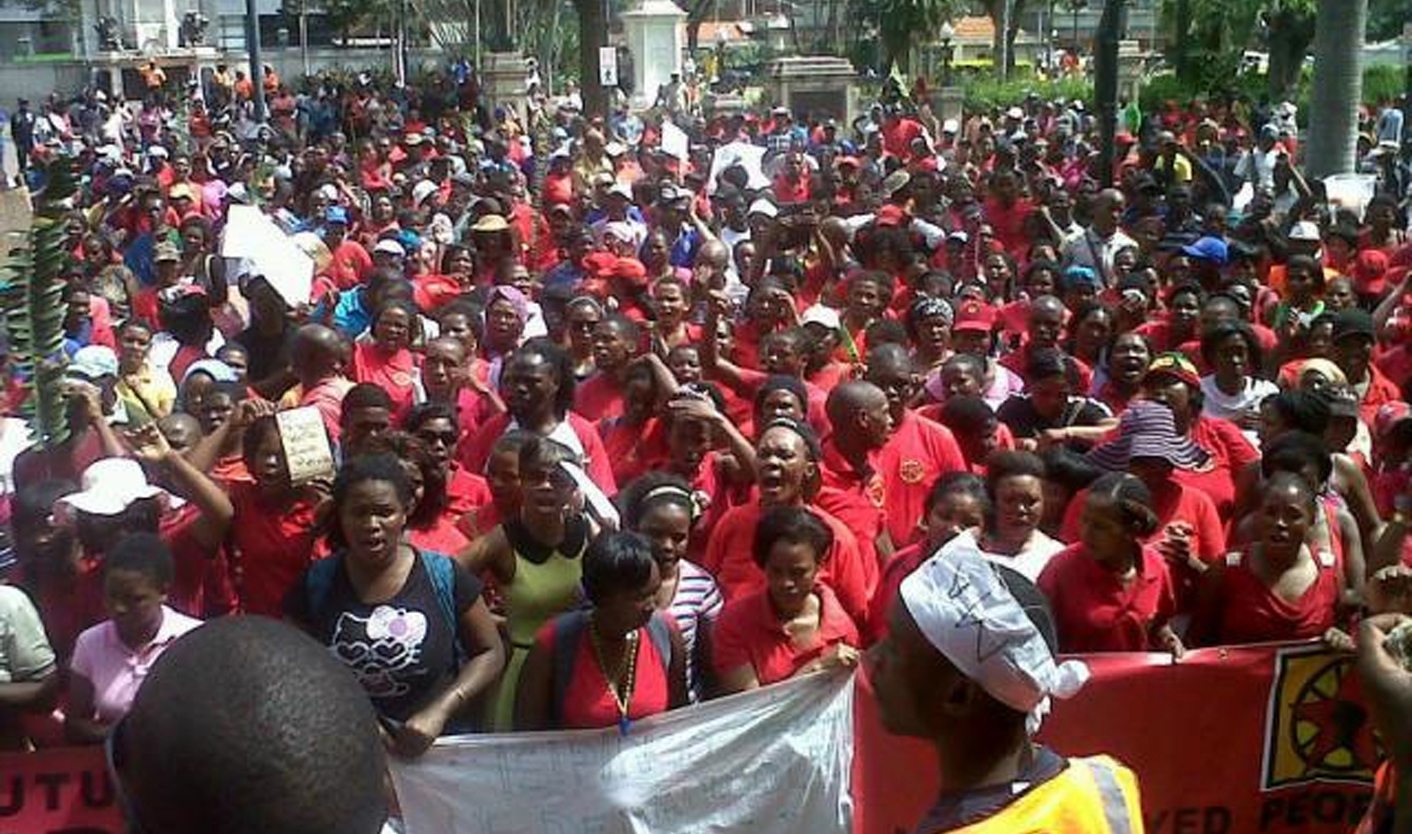 A 17-year-old girl was shot and killed during a protest in the Cato Manor informal settlement on Monday morning. Police insist they acted in self-defence, but protesters believe the shooting was politically motivated, designed to stifle dissent. Whoever's right or wrong, Nqobile Nzuza has died. By KHADIJA PATEL.

Once more the South African Police Services’s incapacity to effectively facilitate the right of South Africans to protest has come into sharp focus. In the early hours of Monday morning a 17-year-old girl, Nqobile Nzuza, from the Cato Manor informal settlement in Durban was gunned down during a protest. Activists from the shack dweller’s movement, Abahlali Base Majondolo, lay Nqobile’s death squarely at the feet of the police.

Mnikelo Ndabankulu, a spokesperson for Abahlali, says the movement had decided to barricade roads in protest against government’s failure to heed to its core demand: to provide housing to the homeless.

“If you can remember very well, we had a march protest on 16 September and then we gave the municipality and other stakeholders seven days to respond to our grievances failing, which we [would] show our political power, and that is what happened in our branches – blocking roads and burning tyres,” Ndabankulu says.

Details surrounding Nzuza’s death remain unclear. A statement from Abahlali alleges that it was Cato Manor’s Station Commander who shot Nzuza. “[Abahlali members] say that he was not in his uniform when he murdered her, but that he came back later in his police full uniform,” the statement reads.

That allegation, however, remains untested. Police insist they were under attack from the protesters. And at the end of it, before dawn had even broken on Monday, Nzuza was found dead.

A spokesperson for SAPS, Colonel Jay Naicker, told News24 that residents blocked Belair Road on Monday morning and police were called to disperse the crowd.

“About 500 people surrounded the vehicle. They started stoning the vehicle and broke all the windows. The suspects then tried to pull the police out of the vehicle,” he said.

Ndabankulu denies that the assembled protesters were violent.

“No policeman was reported injured and no property was reported damaged except the fire on the roads, so how can you explain that violence from police?”

He adds that a large contingent of police was present at the protest.

“There were lots of cops. POPs [Public Order Policing], Metro police and SAPS,” he says.

Despite the numbers in the police contingent, however, the SAPS claim their members felt compelled to use live rounds to defend themselves from advancing protesters.

“They heard gunshots among the crowd. They fired shots into the crowd and the crowd dispersed … they used live rounds. They definitely would have been killed by the crowd [otherwise],” Naicker said.

Police only discovered later on that a protester had been shot dead.

“Members of the Independent Police Investigative Directorate (Ipid) were called to the scene. They opened a docket of public violence and one of murder,” Naicker said.

The docket of public violence appears to be related to the arrest of Abahlali general-secretary Bandile Mdlalose on Monday. She was remanded in police custody without being formally charged, but is due to appear in court for a bail application on Tuesday.

Mdlalose’s organisation believes her life is in danger.

“The ANC in the area have made public death threats against her,” Abahlali said in a statement released shortly after Mdlalose’s arrest. “The police work for the ANC. We are worried about her safety. A number of comrades have been assaulted in police stations in recent days including Cato Crest and the Sydenham police station.”

For Abahlali and other activists in Durban, Mdlalose’s arrest and the death of the 17-year-old during Monday’s protest are inextricably linked to what they allege to be a campaign of violence directed at dissidents against the ruling ANC in KwaZulu-Natal.

The shack dweller’s movement allege that on Saturday 21 September 2013 a “Mr. Goven” from the Land Invasions Unit shot one of its members, Nkosinathi Mngomezulu, in the stomach during an eviction in Cato Crest. “Mr. Goven is not arrested yet [but] Mngomezulu is under arrest in hospital,” they say. “Our members have been assaulted in the Cato Crest police station after evictions and protests and yet no action is taken against the officers that beat our members.”

Pointing out the death of one of its leading members, Nkululeko Gwala, on  26 June, Abahlali says, “No one is arrested for this crime. We all know that it has not been properly investigated. Three months earlier Thembikosi Qumbelo was assassinated. Against there are no arrests and there has been no proper investigation.”

Abahlali claims ANC members openly threaten them with death but “police never act against them.”

The death on Monday of the 17-year-old in Cato Manor casts new questions on the ability of the SAPS to facilitate the right of South Africans to protest in politically charged surroundings.

Public order policing in South Africa has long been steeped in controversy and has come under intense scrutiny since the Marikana massacre last year, but it is exactly the kind of protest that took place on Monday reveals how much South Africa has changed since the end of Apartheid.

The constitution guarantees the right to protest, to demonstrate dissent. Increasingly, however, we are seeing that the freedom of assembly is not actually ensured. It must compete with tear gas, rubber bullets and live ammunition in a bloody turf war for the streets. And most often it is violence that reigns supreme.

Violence by frustrated protestors, yes, but also by the police, rekindling memories of the brutality of the Apartheid era.

Last November, the South African Human Rights Commission, when it released its findings into the death of Andries Tatane, pointed out that an increasing incidence of service delivery protests ultimately led to the death of Tatane. To this end, the SAHRC recommended that the Minister of Traditional Affairs and Local Governance “report on measures to ameliorate systemic failures in local government that often lead to service delivery protests, and report to the Commission on meaningful engagement on such concerns as to avert these protests.”

Similarly in Durban, it is a dire shortage of housing, the evictions of shack dwellers and the existence of transit camps for the displaced that is fuelling protests.

“We are very disturbed at the death of our comrade and we are sharing words of condolences to her family, but the strike continues and the blockages will still happen, tonight or tomorrow,” Ndabankulu, the Abahlali spokesperson, says.

“Our members say shooting and killing them will not stop the strike. They will only stop once they get houses.” DM

Earlier this morning, we have received the statement from the SAPS spokesperson, Solomon Makgale:

Today,30 September 2013, at about 04:00 police at Cato Manor received a report that the community had blockaded Bellair Road. When police got to the blockade they found that they could not get through and then proceed to get around the blockade using Harcomb Gardens Road. When they entered the road they found a mob of 500 people waiting for them. They were ambushed and the suspects stoned the vehicle  and broke the windows whilst surrounding the vehicle. The suspects then opened the doors and attempted to pull the members out. Police also heard gunshots emanating from the mob and realized that they were going to be killed. They then fired shots at the group and the suspects fled allowing the two police officers to reverse the van and return to the police station to get back-up.

When the police later returned at the scene they found that two females were injured in the shootout. One was taken to hospital whilst the second died at the scene prior to the arrival of police.

The KwaZulu-Natal Provincial Commissioner Lieutenant General Mmamonnye Ngobeni condemned this attack on police officers. “We acknowledge and respect that the public has a constitution right to demonstrate but the police also has a constitutional mandate to maintain law and order. Violent protests are not acceptable and the police has responsibility to protect property and lives during these violent protests. The public is warned that we will use necessary force to execute this constitutional mandate. It is regrettable that the violent protest led to the loss of life but our police officers will protect themselves when they are attacked or ambushed and perpetrators of such violent protests will be arrested and prosecuted,” said Lieutenant General Ngobeni.