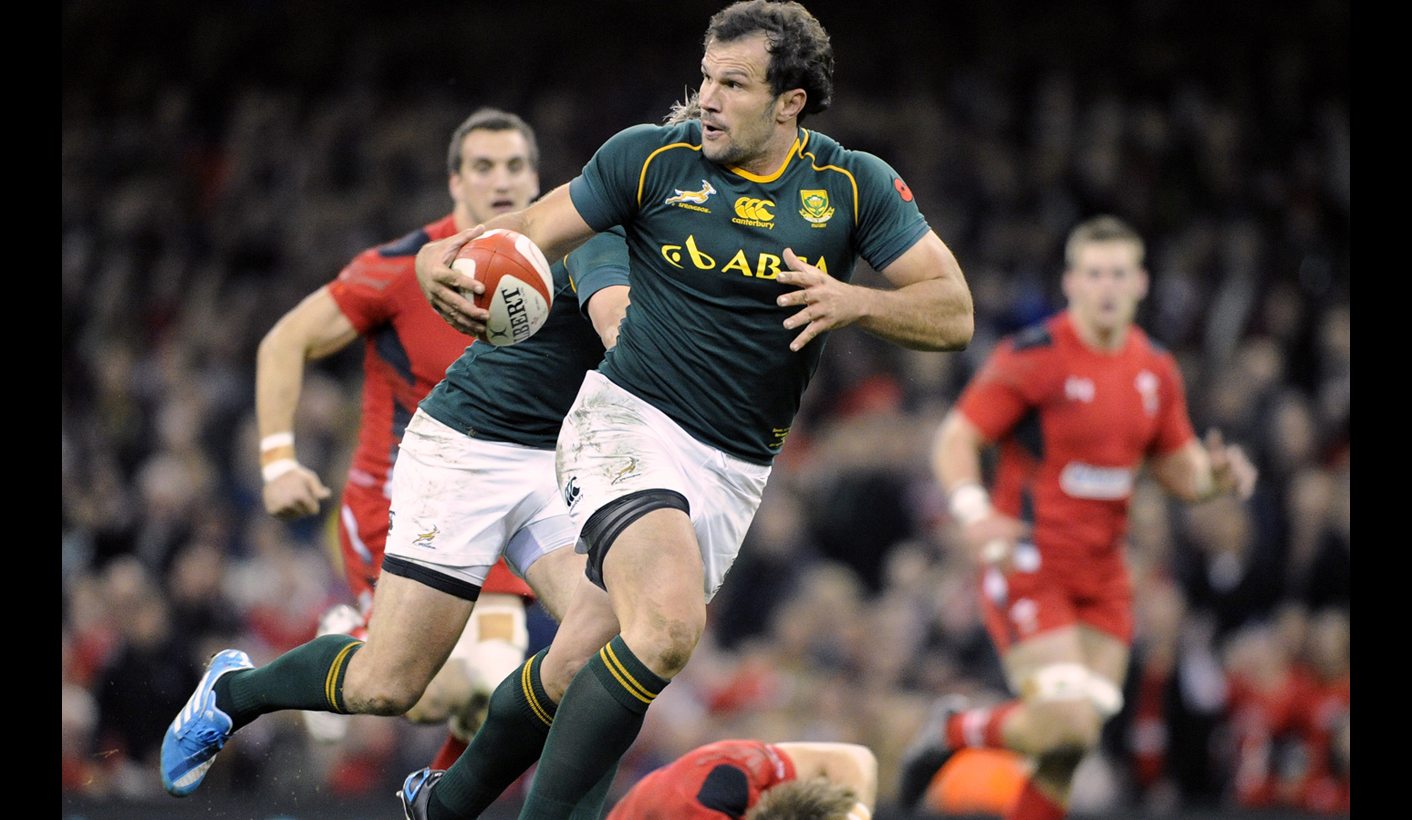 Springbok coach Heyneke Meyer on Monday made an early plea to referee Nigel Owens to protect the attacking side when South Africa and New Zealand meet in an epic Rugby Championship decider at Ellis Park on Saturday. By KEN BORLAND.

While Meyer insisted he was speaking in general terms and not referring to Frenchman Jerome Garces’ performance in the match against the Wallabies last weekend, his frustration that the Springboks were denied a bonus point against Australia despite their overwhelming dominance was obvious.

Meyer conceded that the Springboks had enough opportunities to claim the fourth try at Newlands, but with his team now needing a bonus-point win against the All Blacks to have any chance of claiming the Rugby Championship title, his desire for an open, free-flowing game is understandable.

“We’re not allowed to blame the referees but if a referee does not help you in the mauls, if people are allowed to crash into you in the air or take out your legs, then you can’t maul, it’s simple. Against Argentina in Johannesburg, the referee was brilliant, he allowed us to maul. The scrums are the same.

“There are brilliant officials in world rugby at the moment, they’re unbelievable. And you must have great officials in order to score tries. With the right referee, you can play positively, and I think New Zealand will want to play positively as well because the more tries we score, the more the game opens up. I think it should be a great gameon Saturday,” Meyer said on Monday.

While the mauls are probably the Springboks’ most potent not-so-secret weapon, their play at the breakdown – with a specialist consultant appointed in that department in Scotsman Richie Gray – has been greatly improved, feeding into a backline that is playing attacking rugby that has surprised all their opponents.

“Their backline is a real threat, they’ve proven that throughout the Championship,” All Blacks centre Charles Piutau said on Monday.

But the area which Meyer believes the All Blacks have a big advantage in is a surprise – the kicking game.

“There are lots of things where we have caught up, like the breakdown where I think we have won the most ball on the ground this season, but where we are far behind the All Blacks, believe it or not, is in the kicking game.

“We only win about 20% of our kicks back, whereas their kicking game is probably the best in the world. They kick the ball and usually regain it and then score from there. We have to take risks to score four tries, but they score from your mistakes,” Meyer said.

Whatever happens on Saturday, one thing Meyer is adamant he wants to avoid is his team falling between two stools; if they’re going to go for four tries then they must be absolutely committed to it. And the experienced coach knows exactly how to chase unlikely targets: One of the most incredible results in rugby history came under his charge when the Blue Bulls, needing to beat the Queensland Reds by 44 points to make the 2007 Super 14 semi-finals and by a staggering 72 points to host the knockout game, won 92-3 at Loftus Versfeld. The previous year, Meyer had inspired the Bulls to beat the Stormers by more than 32 points to make the playoffs.

“The All Blacks are a quality side and it’s very difficult to score even one try against them. But if you don’t believe you can do it, why play? We must make a firm decision to go for four tries or not and we must not be in two mindsets,” Meyer said.

The Springboks will have to make at least one change to their team with lock Flip van der Merwe suspended for one week for a dangerous tackle that saw him strike Wallaby wing Joe Tomane in the face with his elbow.

A comparison of that incident with a video of All Blacks centre Ma’a Nonu smashing into Jean de Villiers, late and off the ball, with his shoulder in Auckland a fortnight ago should give Sanzar cause for grave concern over the consistency of their citing procedure, but a one-week ban for Van der Merwe is fitting for the crime.

Van der Merwe’s absence should mean a return to the starting line-up for Bulls team-mate Juandre’ Kruger, while it could also mean a first cap, eventually, for Lions second-rower Franco van der Merwe, who was called into the squad on Monday.

Meyer said on Monday that being thrust into the lineout-organising role of the number five lock, even off the bench, may be an unfair ask for young Pieter-Steph du Toit, who has seldom played there for the Sharks.

“Pieter-Steph has played no more than 10 games at number five and is more of a long-term option. We’ll definitely look at Franco, especially against the All Blacks, who’ve made a huge improvement in their lineouts. You don’t want to just throw a youngster to the wolves,” Meyer said.

There could also be a starting role for centre Jan Serfontein as team doctor Craig Roberts said JJ Engelbrecht will be given a couple more days to prove his fitness after taking a nasty knock to his quadriceps (thigh) muscle against the Wallabies.

Roberts said his muscle had suffered a contusion and was bleeding, classifying the injury as “one of the bad ones you can’t just play through, you could see he couldn’t run comfortably”.

Meyer said his focus this week in training would be on detail rather than quantity.

“It’s been a long year and a tough Championship and a mistake I’ve made in the past has been to over-train the players. No matter how specific you are in training, the players need to be fresh out there on Saturday. We don’t train on emotion, so there’ll be a few slight tweaks and we’ll only train in the afternoons this week,” Meyer said.

No matter the result on Saturday, it has still been a much-improved campaign by the Springboks. South Africa have only won the southern hemisphere title on three occasions in 17 years, so just being in a position to break the stranglehold of the 11-time champion All Blacks is quite an achievement.

“We’ve come on leaps and bounds from last year. If we don’t win on Saturday, then we still finish second, compared to third last year, plus we’ve had two away wins this year,” Meyer pointed out.

“This is not just PR-talk, but where New Zealand get it right is that they use their whole system to fix any weaknesses in their national team. They work together as a nation and we’re moving in that direction.

“It won’t come overnight, but I want to thank the franchises for their help and I believe we’re working together,” an impassioned Meyer said. DM

‘First in, first out’: Why you should register for your Covid jab ASAP