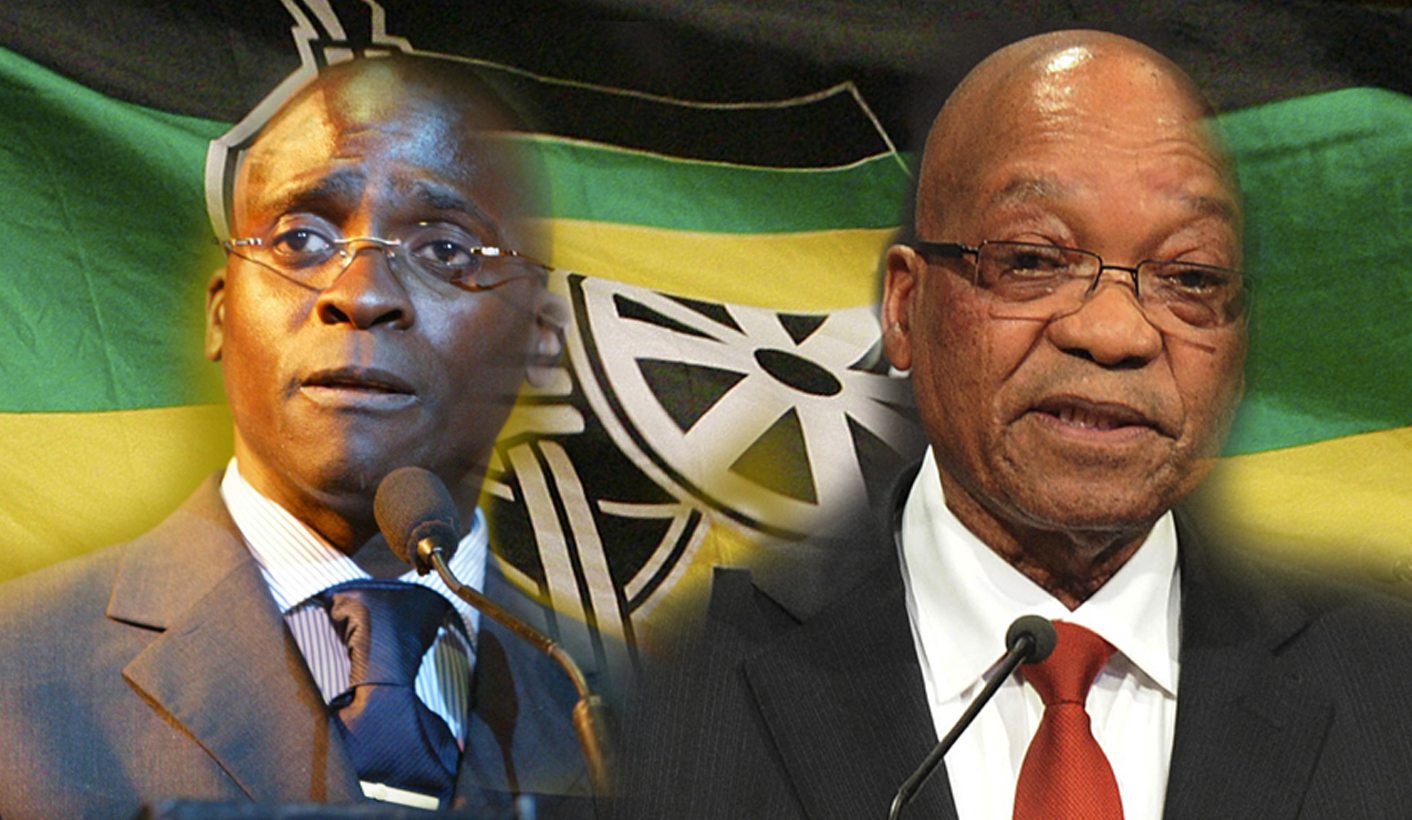 President Jacob Zuma said on Sunday that he wants the ANC to win a two-thirds majority in 2014, apparently so that it can change some of the country’s laws. The ANC national executive committee (NEC) is meanwhile trading up its election machinery, putting to pasture the head of its elections team Ngoako Ramatlhodi and replacing him with the well connected, super minister Malusi Gigaba. This is not a just an infusion of young blood, it marks a change in gear in the ANC’s election campaign. By RANJENI MUNUSAMY.

The energetic Fikile Mbalula as head of the ANC’s campaigns committee ran the 2009 and 2011 shows quite ably. With Mbalula no longer a member of the NEC since the Mangaung conference, Gauteng premier Nomvula Mokonyane has replaced him as head of the campaigns committee. The former mayor of Johannesburg Amos Masondo runs the backroom administration of party’s elections machinery. The ANC has obviously realised that the 2014 national and provincial elections will be its biggest test yet at the polls and the combination of Ramatlhodi, Mokonyane and Masondo was not exactly a crackerjack team.

ANC secretary general Gwede Mantashe announced after this weekend’s NEC meeting that Gigaba would now chair the election sub-committee. Gigaba’s deputy on the sub-committee will be Thoko Didiza, an ally of former president Thabo Mbeki who made her comeback onto the NEC at the Mangaung conference.

Mantashe gave no explanation for the decision to replace Ramatlhodi with Gigaba but it is clear that the ANC wants to take its election campaign up a few notches to deal with the changing environment. The ANC will face new competition in this election from parties such as Agang and the Economic Freedom Fighters (EFF), while turbulence in Cosatu could likely result in an onslaught from within the alliance led by metalworkers union Numsa. The ANC has also had its toughest term in government under President Jacob Zuma, with the series of scandals and disasters plaguing the administration bound to be used by opposition parties to attack the ruling party.

All of this requires thinking outside the box in the elections campaign. Gigaba is street-smart and wily, and has the ability to modernise and jack up the ANC elections strategy. More than that, Gigaba has the favour of both Zuma and Mantashe, which is essential for the survival and advancement in the ANC. But Gigaba is also well connected, allegedly maintaining a close relationship with the president’s friends, the Gupta family. The Guptas would approve of his appointment and probably contribute generously to the campaign under Gigaba. As minister of the powerful public enterprises portfolio, Gigaba will also be able to make sure that the ANC’s election campaign is well resourced.

Apart from his strategic placement, Gigaba would also be aiming to retain the support of the youth for the ANC and fend off Julius Malema’s EFF. Both Gigaba and Malema are former ANC Youth League (ANCYL) presidents and will be targeting activists in the League’s disbanded structures to help shore up the youth vote. The ANCYL in its current state of incubation under a national task team will not be of optimum use in the elections campaign and Gigaba will have to find alternate means to target the youth.

The ANC has made a few more changes as it gears up for the elections. Mantashe said Health Minister Aaron Motsoaledi had asked to be moved as convenor of the NEC team deployed to the Western Cape. Science and Technology Minister Derek Hanekom, also head of the ANC’s disciplinary committee, takes over the Western Cape post. Zizi Kodwa, Zuma’s former spokesman and newly appointed advisor to Mokonyane, takes over from Hanekom as convenor of the ANC NEC deployees in the Eastern Cape. Gigaba was previously the convenor of NEC deployees in the Free State and will now be replaced by David Mahlobo.

Kodwa’s appointment in the Eastern Cape is also a strategic one. The province is destined to be a battleground province, with the ANC facing a serious challenge from the opposition, particularly if the Democratic Alliance, United Democratic Movement, Congress of the People, Agang and the Economic Freedom Fighters form a coalition of sorts to break the dominance of the ruling party. Kodwa has previously worked and campaigned in both ANC and ANCYL structures in the Eastern Cape and understands the dynamics, although the factional warfare and delivery failures in the province will be a mountain to climb.

The other battleground province in 2014 will be Gauteng. While the NEC has retained its NEC deployee team under Susan Shabangu, the mineral resources minister, the party’s provincial leadership seems to be taking fright from the onslaught of the opposition in Gauteng. The Sunday Times reported that the Gauteng ANC wants Mbeki to assist in the election campaign to help win over the middle-class vote. Provincial secretary David Makhura said the party would hold house meetings and public dialogues to target the middle-class constituency, and wanted leaders like Mbeki, Deputy President Kgalema Motlanthe (who is no longer part of the ANC leadership) and the party’s deputy leader Cyril Ramaphosa to address these gatherings.

The paper said the ANC Gauteng strategy of using these leaders to campaign instead of Zuma arose from fears that president’s unpopularity with the middle class would cause harm to the party. Makhura said Zuma would be used in the province to campaign in poor and working-class areas.

But Mantashe said the Gauteng ANC had “unfortunately run ahead of themselves” as deployment of leaders to the elections campaign is “done centrally”. Despite Mantashe wanting to cut the province’s leaders down to size for making public their deployment plan, the campaign strategy in Gauteng will have to be more imaginative and aggressive if the ANC is to maintain its majority.

Zuma was on the campaign trail in Gauteng on Sunday, flanked by provincial chairman Paul Mashatile and Shabangu. According to the SABC, Zuma said during a rally in Katlehong on the East Rand that he wants the ANC to win next year’s election with a two-thirds majority so that it can change some laws. Zuma did not say which legislation he wants to be amended.

While Zuma remains comparatively popular in townships, such messaging could cause further foreboding in middle-class areas of the province. With saturated media and social media coverage on the election trail, it would be impossible to contain messaging to certain designated areas. But through the current process manifesto forums being convened nationwide, the ANC is trying to tap into the sentiment on the ground to tailor its election messages according to what people want.

Before the end of the year, the ANC will convene a national list conference, when South Africa will get a glimpse of how the ruling party will be stacked for the 2014 elections. ANC structures throughout the country are currently holding meetings to decide on the list of people they want deployed to the national and provincial legislatures. These will be consolidated into one national and nine provincial lists. The list conference will probably also give some indication as to who will be number two on the ANC’s election ticket.

For now the people calling the shots will be Zuma, Mantashe and Gigaba. Expect to hear, and see, a lot of them. DM