A luta continua: defending Malema and Mabulu’s right to express themselves 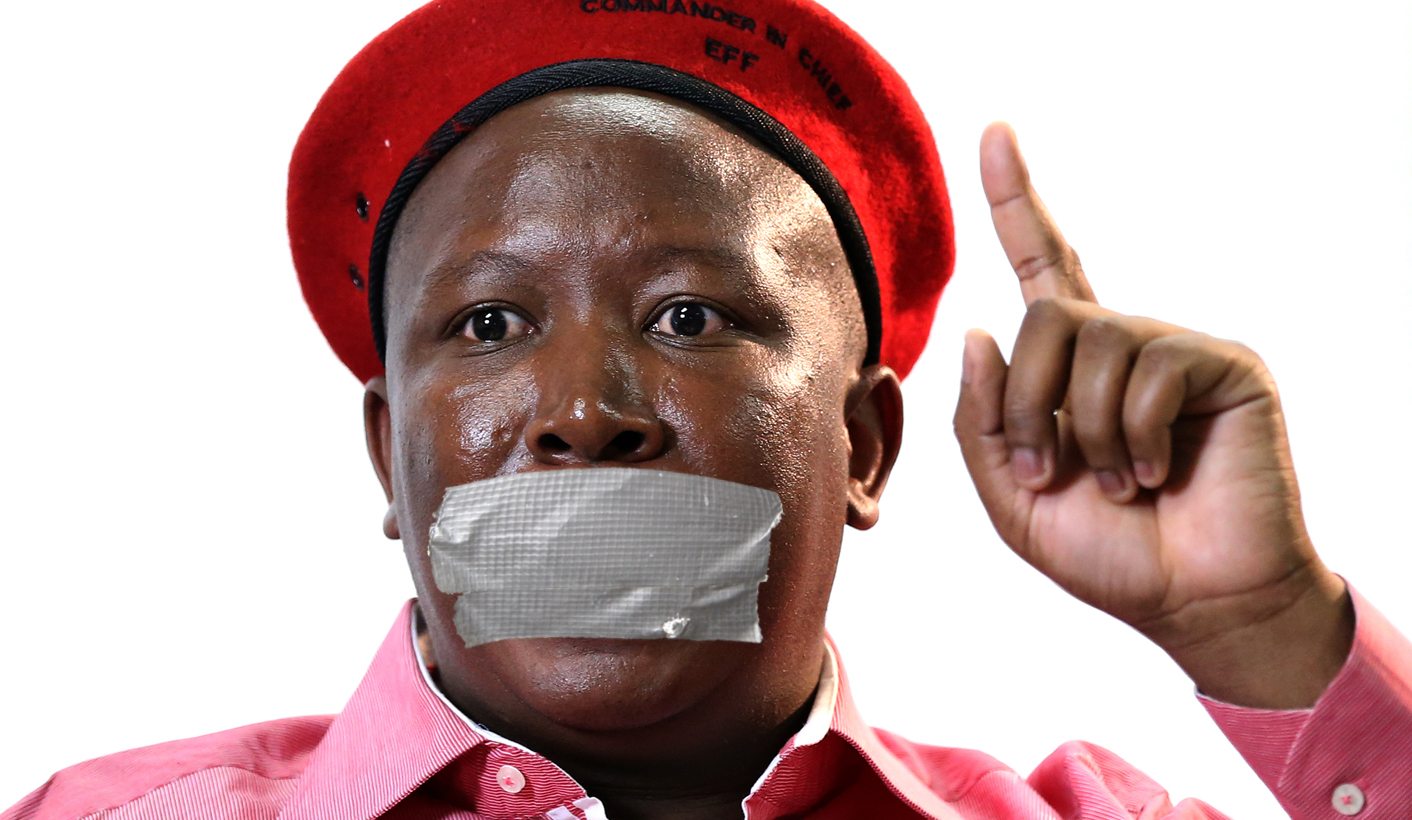 South Africa, and South Africans, value freedom. Some might be skeptical of this claim and believe that the water in this particular pot is heating up without us noticing. But scratch deeper, and you are bound to discover that things don’t happen in this country if citizens get angry enough. The censorship last week of Julius Malema and artist, Ayanda Mabulu, has underscored the point that South Africans remain freedom fighters. The country is always going to be bigger than our politicians. By STEPHEN GROOTES.

Ayanda Mabulu and Julius Malema would probably make for difficult dinner guests. It would not be an easy meal. Discussion would probably be loud, rambunctious, and in your face. All the time. Sensitive souls might find much of the discussion, and its imagery, difficult to stomach. They are, after all, extremists in their own way. And how a society deals with its extremists tells you everything you need to know about them.

On Thursday, Malema was barred from speaking at Unisa’s campus. He had been told that a meeting he was due to address had been cancelled. On Friday, during an interview on the Midday Report, Unisa attempted to explain why this action had been taken. The university explained that two organisations on campus, the union NEHAWU, and the students’ political group, SASCO, had made it plain that they would protest and stop Malema from speaking.

Just to be clear here, both of these groups are affiliated to the ANC. And it doesn’t matter whether this action was mandated by Luthuli House or not, these were ANC people saying they would stop someone from exercising their right to freedom of speech.

Unisa’s response was to cancel the meeting on the grounds that there was the strong prospect of “damage to people or property”. Based on the view of their security staff, the university reckoned it would be dangerous to allow Malema’s speech to go ahead, not because of what he would say, but because of the possible reaction just to his presence.

Unisa was wrong. It was a total abrogation of its reason for existence as a university; that is, to discuss facts and knowledge and to produce new knowledge. In all societies political change begins in the cities. That’s where people congregate and debate. And in most cases, change in the cities starts in tertiary institutions where students – young people with flexible minds and with the time and energy to think, speak, act, protest, demonstrate and ponder the future – first act as incubators of change.

Our universities should be centres of political activity, they should be places where we see the future, and whether it works or not.

And in these debates and discussions, words are almost all we have. Without words, we are left only with images and violence. And images, as Mabulu reminds us, and Brett Murray taught us, play a powerful role in our politics.

But for most people, it’s about words. It’s your words against mine, your ideas against mine, your thoughts and hopes for the now and the future against mine. Words need to be protected, almost above all else. Because without them we will descend into violence, and the lives of all our politicians will be nasty, brutish and short.

Unisa should have called out the army to defend Malema’s right to speak. The university should have proudly proclaimed that its campus is a haven of ideas, thought, words and discussion. That it’s not a place of the tyranny of thugs, where those who threaten violence rule the roost.

Instead, it decided to let two political organisations act as jack-booted censors. It allowed them to decide not just what can be said, but also what can be heard.

Unisa, and all its administrators, should be ashamed of themselves.

The other people who should be sitting in the naughty corner with Unisa are Ross Douglass and Cobi Labushagne. If you haven’t heard of them before now, you’re not alone. They’re the two organisers of the Joburg Art Fair and who decided to remove Mabulu’s painting, Yakhal’inkomo – Black Man’s Cry from the exhibition.

It’s a typical Mabulu image, in that ANC leaders feature in a way unlikely to see the painting in the reception area of Luthuli House. At least this time, President Jacob Zuma is wearing clothes. Even if it is a capitalist suit. Unfortunately for Douglass and Labushagne, he’s also standing on the head of a Marikana miner, and holding the leash of a dog that is attacking another one.

Douglass and Labushagne decided this was too controversial for them and removed the painting. Really, what did they expect, for goodness’ sake? It’s a Mabulu painting. It’s the usual problem with the suits in the media and art worlds. Everyone wants to own the content that’s “out-there”, “extreme” or the talk of the town. That’s how you make money. But no one wants to be left carrying the can when the reaction rolls in.

They claim they didn’t want to offend any politicians who would be attending, because some of their funding comes from government. Well, there’s the first problem. Art and governments don’t mix. That’s kinda the point of art. Government is by definition the establishment. Artists, also by definition, are anti-establishment. And so the two will always collide.

And we shouldn’t always be so scared about the reaction of the ANC. Sure, what happened during the fracas around The Spear was scary. Gwede Mantashe telling thousands of people marching up Jan Smuts Avenue that “you’ve won in the streets what you couldn’t win in the courts” is probably the most frightening use of populism we’ve yet seen. The tactic of Zuma always using the hurt and oppression of our country’s majority as a self-defence cloak is still very effective.

But two weeks later when Zapiro drew Zuma as a penis in the Mail and Guardian, Mantashe hardly blinked. The Goodman Gallery itself is still fighting, as its director, Liza Essers, happily sailed back into the fray on Saturday, calling against a culture of self-censorship, and reminding everyone that it is the duty of those arranging art-exhibitions to fight censorship whenever they see it.

And, don’t forget, the ANC itself is not one homogenous grouping. Arts and Culture Minister, Paul Mashatile, is no big Zuma fan, and is unlikely to have immediately called for hell and damnation to rain down on the Joburg Art Fair. Kgalema Motlanthe would probably have looked at the image and been very dignified in explaining what it tells us about ourselves as a nation.

In the end, as we all know by now, David Goldblatt removed his pictures from the Fair, and so ensured that Mabulu’s work was restored to its rightful place.

And this is really the moral of our story. That this country does not allow people to take its freedom away that easily. That we are a big place, with lots of different views. That if you act in a way that takes away freedom, often the reaction will lead to more freedom.

If you censor something in our country today, you are simply asking for those who can, to tweet and re-tweet, show and re-show, copy and re-copy that image, that idea, that thought. You are calling on all of us to be revolutionaries, to oppose, to protest and to demonstrate.

In South Africa, when you try to ban, censor and to stop us, you just make us stronger. DM

Photo: Julius Malema gestures during an interview with Reuters in Johannesburg this year. REUTERS/Siphiwe Sibeko