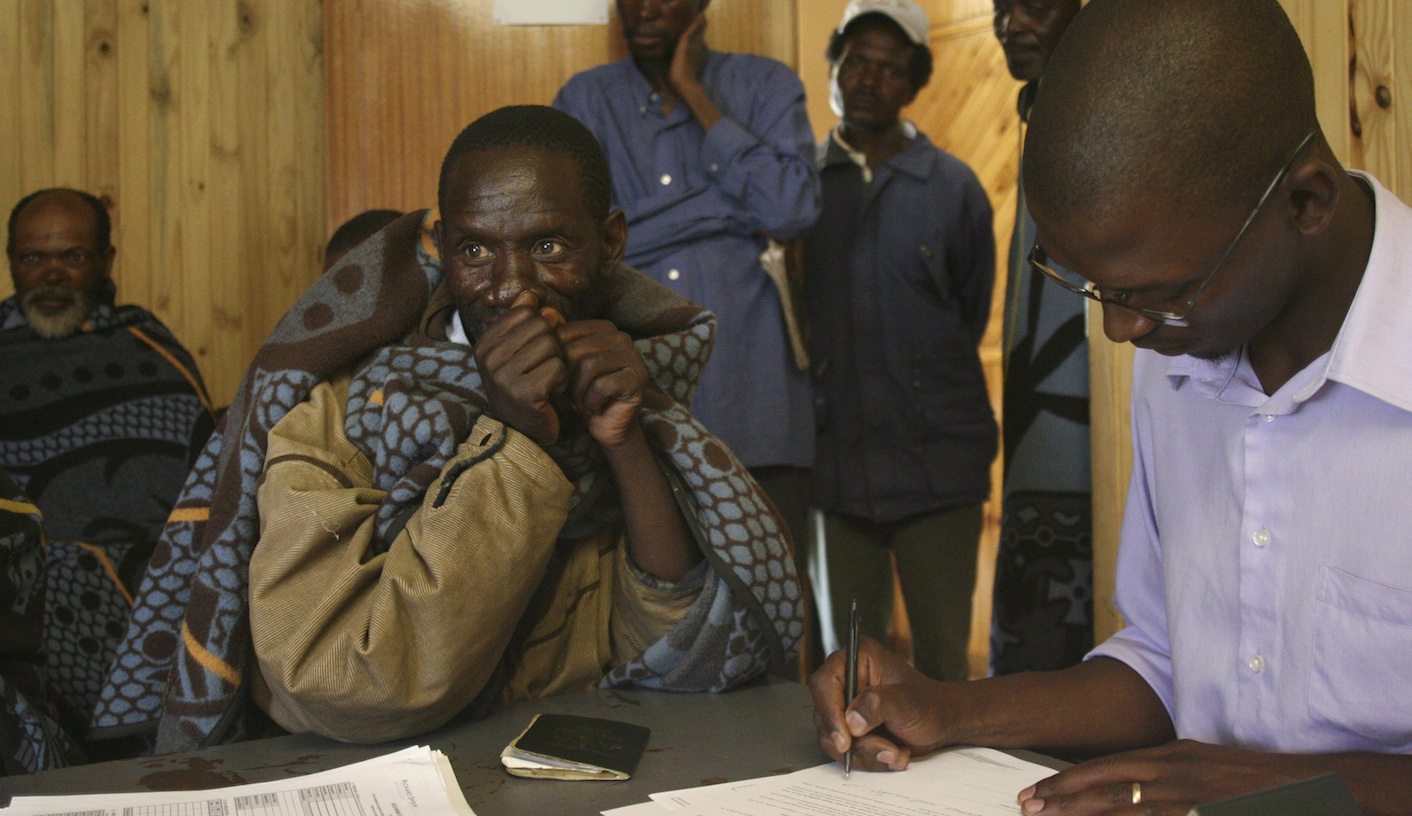 On Wednesday it was announced that Anglo-American South Africa would pay 23 former mineworkers undisclosed amounts to settle claims brought against the company after the workers contracted silicosis. The mining house remains adamant that this is not an admission of liability. But lawyers for the mineworkers are hopeful that the settlement may pave the way for payouts for silicosis victims across the industry. By REBECCA DAVIS.

Silicosis is a lung disorder caused by inhaling bits of silica, a mineral found in sand and rocks, over an extended period of time. Silica dust particles can make tiny cuts on the lungs, creating scar tissue which makes it more difficult to breathe. It’s a progressive condition, and sometimes it can come on up to ten years after exposure to silica. People who are most at risk for developing the condition are those who work with sand, rock or quartz, in industries like construction, demolition, or mining.

The South African government has recognised the problem of silicosis and committed to “significantly” reducing its prevalence by 2015 and eliminating it entirely by 2030. It’s a particular public health issue in South Africa because exposure to silica dust increases the risk of TB.

“It is probably fair to say that in any population of silica-exposed workers living in the rural labour-sending areas of South and Southern Africa a detailed study is likely to find that about one in three have, or have had tuberculosis, about one in four has silicosis and that almost none have been properly compensated,” the Department of Labour writes on the subject. The same report says that industry has not done enough in the past to address the issue: “dust control is inadequate in both the mining and non-mining sectors”, it claims.

But despite this, the government has in the past taken a tentative approach to the question of compensatory litigation against mining houses. In 2006 the waters of legal liability were tested by a South African gold miner called Thembekile Mankayi, who sued AngloGold Ashanti for R2,6 million. Manyaki said he had developed silicosis after working on AngloGold Ashanti’s Vaal Reef operation for 16 years, and his health had declined to the point where he could no longer work.

At the time, Department of Minerals and Energy director general, Sandile Nogxina, voiced unease on behalf of the government. “We would not want to be seen as standing in the way of someone following their rights, but we would not like to see a situation that is damaging to the mining industry,” Nogxina told the Miningmx website. “We hope sanity will prevail. It is my wish that this matter be resolved out of court. If it sets a precedent it could open a floodgate of litigation.”

In 2008, the Johannesburg High Court ruled that Manyaki couldn’t lodge a civil claim against AngloGold Ashanti because he had already received a small amount of compensation under the terms of the Occupational Diseases in Mines and Works Act. But in March 2011 the Constitutional Court ruled unanimously that mineworkers did indeed have the common law right to claim damages from mine owners.

It was a judgment that mining houses would have been hoping to avoid. Research carried out by Neil White and Anna Trapido in the late 90s estimated that the South African mining industry would need at least R10 billion to compensate all the former mineworkers with respiratory diseases, the Mail & Guardian noted in 2011. The ground was laid for the “floodgate of litigation” ominously prophesied by Nogxina.

The 23 plaintiffs who received settlements from Anglo American South Africa (AASA) on Wednesday are the tip of the litigation iceberg. Law firms Leigh Day and Mbuyisa Neale have made it clear that they are going after AASA hard. In a joint statement, the two firms explained that they are targeting AASA – as opposed to other mining houses – for a number of reasons. Firstly, its size: because Anglo American owned 11 gold mines up until 1998, they say its liability is the largest. Secondly, its wealth: the law firms cite recent estimates of AASA’s assets at $37 billion. As such, “its pockets are sufficiently deep to cover its extensive potential silicosis liability”.

Thirdly, the law firms claim they have reviewed enough AASA documents, and spoken to enough medical and mining experts, to be confident that their case against AASA is strong. (Of course, it would be unusual for a law firm not to claim this.) It’s a sign of how committed the firms are to the litigation that they have based staff in the Eastern Cape, Free State and Lesotho – the areas which were traditionally the main sources of labour for the gold mines – to recruit former miners as clients. The firms “anticipate that their client base will rise steadily”, Leigh Day and Mbuyisa Neale said on Wednesday.

For their part, Anglo American has consistently denied responsibility. Last December the company said that it did not believe “that it was in any way liable for the silicosis claims brought by former goldworkers,” and for that reason would fight the claims. “We maintain that the gold mining companies that owned and operated the mines and that employed these mineworkers were responsible for the health and safety of their employees and took reasonable steps to protect them,” AASA said.

In the case of the 23 former employees, however, AASA has opted to settle before the matter went to arbitration. It was reported by Mining Weekly last December that the claims would be heard by respected former judges Sandile Ngcobo, Ian Farlam and Noel Hurt, in a public arbitration hearing that was set to commence in 2014. AASA must have decided this route was too risky; the law firms had talked the decision of the judges up in advance as possibly being very influential in shaping the principle of liability for the sector.

From their side, Leigh Day and Mbuyisa Neale said that they decided to accept a settlement on behalf of their clients, despite their stated confidence in the case, because time was not on their side. Seven of the claimants had died since the litigation was brought and the health of others was “very fragile”, the lawyers said. As such, they didn’t want to delay payment for possibly in excess of another year. Leigh Day’s Richard Meeran would not disclose the amount AASA was paying out – one of AASA’s conditions of settlement – but said they were satisfied with it.

Leigh Day and Mbuyisa Neale are acting for another 4,000 ex-miners with other claims against AASA. And despite their focus on AASA, other mining houses aren’t exempt. The law firms have also filed claims against AngloGold Ashanti on behalf of 31 former miners at the Vaal Reefs mine, with a hearing reportedly scheduled for 3 October this year. In addition, Moneyweb reported that human rights lawyer Richard Spoor filed claims in December on behalf of 17,000 former gold miners against more than 30 gold companies.

The floodgates have truly been opened. But Meeran told the Daily Maverick that the goal was not interminable litigation but an industry-wide settlement scheme. Such a scheme, he envisaged, would “compensate silicosis victims on the basis of a range of tariffs for the severity of disease, lost earnings and medical expenses – especially for ongoing monitoring for contraction of TB, which is a lifelong risk for silicosis sufferers”.

Despite the potential implications of the settlement, AASA weren’t betraying any public jitters yesterday, with executive director, Khanyisile Kweyama, saying that settling was “in the best interests of the plaintiffs, their families, AASA and its wider stakeholders”. And, lest there be any confusion: “AASA denies any liability and will continue to defend the class action proceedings.” DM