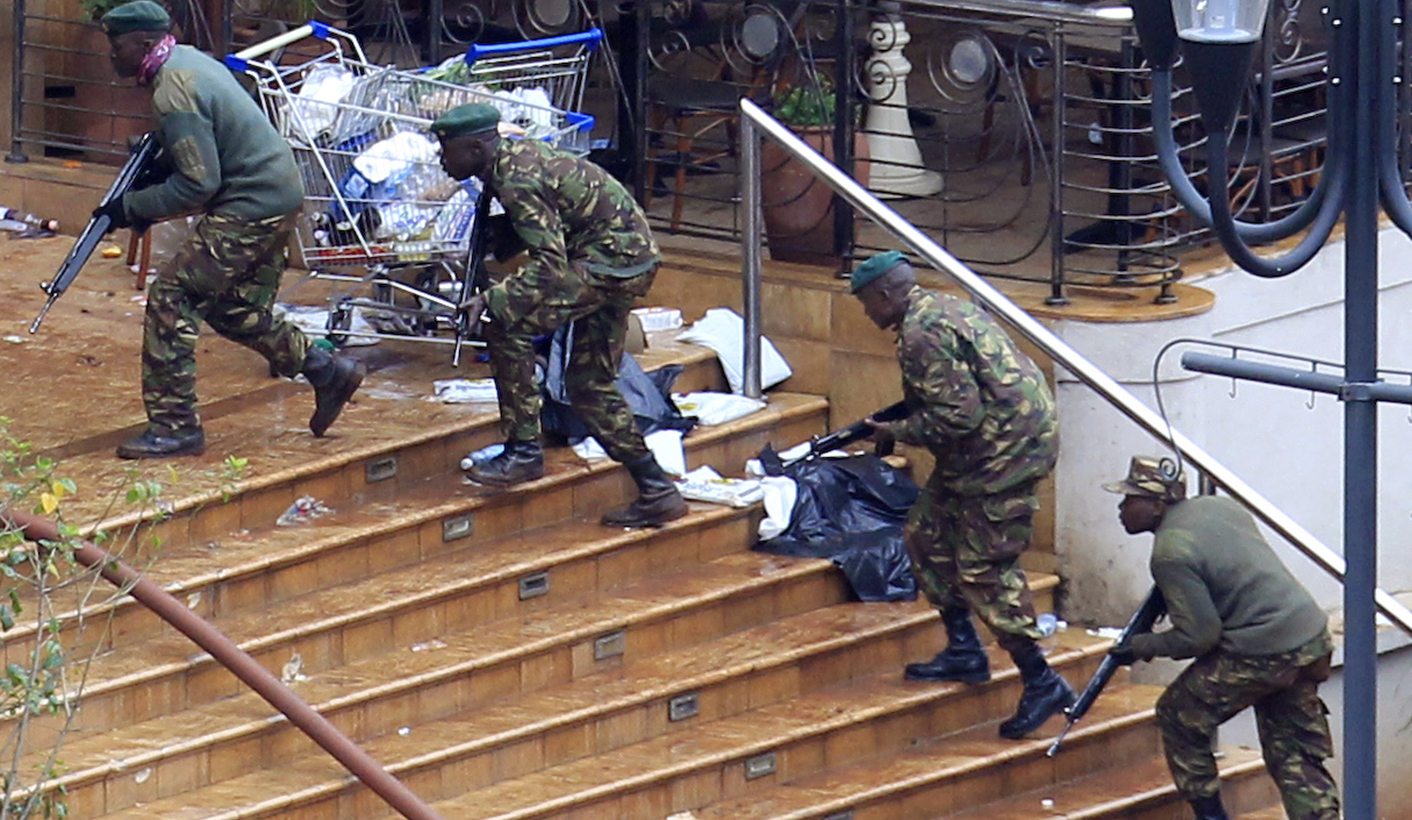 US, British and Israeli agencies are helping Kenya investigate an attack claimed by Somali Islamist militants on a Nairobi shopping mall that killed at least 72 people and destroyed part of the complex, officials said on Wednesday. By Richard Lough and Abdi Sheikh.

President Uhuru Kenyatta said on Tuesday that troops had defeated the al Qaeda-linked al Shabaab group after a four-day siege at the shopping centre popular with prosperous Kenyans and foreigners. He declared three days of mourning.

The attack has highlighted the reach of al Shabaab and the capabilities of its crack unit which claimed responsibility for the bloodshed in the Westgate mall, confirming international fears that Somalia would remain a recruiting and training ground for militant Islam as long as it remained in turmoil.

The militants stormed the mall, known for its Western shops selling iPads and Nike shoes, in a hail of gunfire and grenades at lunchtime on Saturday.

Late on Wednesday night, al Shabaab’s leader for the first time confirmed claims by his group’s members that it was behind the attack on the mall.

In an audio posted on the al Shabaab-linked website www.somalimemo.net, Ahmed Godane, also known as Mukhtar Abu al-Zubayr, said the attack was in retaliation for Kenya’s incursion in October 2011 into southern Somalia to crush the insurgents.

“Take your troops out or prepare for a long-lasting war, blood, destruction and evacuation,” Godane said in the message delivered in the Somali language and apparently directed at the Kenyan government. Kenyan troops are fighting alongside African peacekeepers against the militants in Somalia.

Al Shabaab had threatened revenge since Kenyan troops joined the conflict, warning that they would bring the “flames of war” to a country that is east Africa’s biggest economy. The group has created funding, recruiting and training networks in Kenya.

“You are part of the massacre Kenya carried out in Kismayu and in other towns because you had elected your politicians. The tax you pay is used to arm Uhuru (Kenyatta) forces that massacre Muslims. You had supported the fight against us,” Godane said in the message apparently directed to Kenyans.

Kenyatta has said Kenyan forces would not leave Somalia.

The attack on the mall ended on Tuesday when Kenyan troops detonated explosives to get through locked doors inside the mall as they searched for militants or booby traps.

“We have moved to the next phase,” Interior Minister Joseph Ole Lenku told a news conference.

He said that alongside U.S., British and Israeli agencies, Kenya was also receiving help from Germany, Canada and the international police agency Interpol in the investigation.

He said he did not expect the death toll of 61 civilians, six members of the security forces and five attackers to rise significantly, and that the only bodies still likely to be found were those of slain assailants.

Three floors collapsed after the blasts and a separate fire weakened the structure of the vaulted, marble-tiled building. Officials said the blaze arose from militants lighting mattresses as a decoy.

Kenya has said 10 to 15 attackers launched the raid. Ole Lenku said the investigation would seek to ascertain if there were any females among the assailants, as some witness accounts suggested, and would also see if the groups had rented a store in the mall prior to the attack as part of their preparation.

Al Shabaab said hostages were killed when Kenyan troops used gas to clear the mall, an allegation that officials dismissed as “propaganda”.

“We have ashamed and defeated our attackers,” Kenyatta said in his televised address on Tuesday.

U.S. President Barack Obama, whose father was Kenyan, said he believed the country – scene of one of al Qaeda’s first big attacks, the 1998 bombing that devastated the U.S. embassy in Nairobi – would continue to be a regional pillar of stability.

“The investigators will be looking to see what information they can extract to identify the terrorists and their nationalities, including DNA tests,” a senior official from the National Disaster Operation Centre told Reuters, after officials described the attack as a “multinational” operation.

Eleven people suspected of involvement with the well-planned assault are in custody, but Kenyan officials have not said if any were gunmen who may have been taken alive by security forces.

It was unclear whether intelligence reports of American or British gunmen would be confirmed. Al Shabaab denied that any women took part, after British sources said the fugitive widow of one of the 2005 London suicide bombers might have had a role.

In Washington, U.S. Attorney General Eric Holder said on Wednesday there had been no verification that Americans were involved in the mall attack.

A thin trail of smoke still drifted up on Wednesday above the Israeli-built shopping complex, a symbol of Africa’s economic rise that has drawn in foreign investors.

Faster growth has also created wider wealth gaps, adding to grievances tapped by several violent Islamist groups from Mali to Algeria and Nigeria to Kenya. All have espoused an anti-Western, anti-Christian creed.

“If #Westgate was Kenya’s symbol of prosperity, it is now a symbol of their vulnerability, a symbol of defeat and overall Kenyan impotence,” al Shabaab said on its Twitter account, one of several taunts it sent after the attack.

The group, which derided Kenya as it was battling militants inside the mall, said action by Kenyan troops using gas were responsible for the “lives of the 137 hostages who were being held by the mujahideen (fighters).”

Ole Lenku said he could not confirm intelligence reports of British and American militants. One cabinet minister had earlier denied speculation that women were among the guerrillas, but said some had been dressed as women, a possible ploy to get weapons past the mall’s unarmed private security guards.

It is unusual, if not unknown, for Islamist militants to use female fighters: “We have an adequate number of young men who are fully committed & we do not employ our sisters in such military operations #Westgate,” al Shabaab said on Twitter.

The group dismissed comments by one Kenyan minister that two or three of the militants were young Somali or Arab Americans.

A British security source said it was possible Samantha Lewthwaite, the widow of one of the London suicide bombers of July 7 2005, was involved in the Nairobi siege. “It is a possibility. But nothing definitive or conclusive yet,” the source said.

Lewthwaite is wanted in connection with an alleged plot to attack expensive hotels and restaurants in Kenya.

Kenyatta thanked other leaders, including Obama, for their support and used his address to praise the response of the Kenyan people and call for national unity, six months after his election was marked by ethnic tensions.

Many Kenyans agree that the bloodshed has helped foster a greater sense of national unity.

“We are all talking about it. The one good thing is that the whole of Kenya has become one, except for al Shabaab,” said Vipool Shah, who helped pull bodies out of the mall.

Kenyatta’s focus on Kenya’s troubles, and of his role in a global campaign against terrorism, was a reminder that he faces trial at The Hague in a few weeks time for crimes against humanity over violence that followed a 2007 election.

The International Criminal Court adjourned the trial of his vice president this week because of the Westgate attack.

Kenyatta and his government have urged the ICC to drop the case. Warm words for the Kenyan leadership from Western allies during the siege may have boosted their hopes that the court might be pressed to shelve proceedings in the interests of shoring up an important partner in the fight against al Qaeda.

Shabaab’s Godane, however, warned of the danger that lay ahead for Kenya if it did not withdraw from Somalia.

“Kenyan people, you have entered a war against your interest. You will lose your security and economy,” he said. DM

Photo: Kenya Defence Forces soldiers take their position at the Westgate shopping centre, on the fourth day since militants stormed into the mall, in Nairobi September 24, 2013. Somalia’s al Shabaab Islamist group said on Tuesday there were “countless dead bodies” in the Westgate shopping centre as security forces searched for militants still holed up in the complex after a weekend attack that authorities say killed 62 people. REUTERS/Noor Khamis