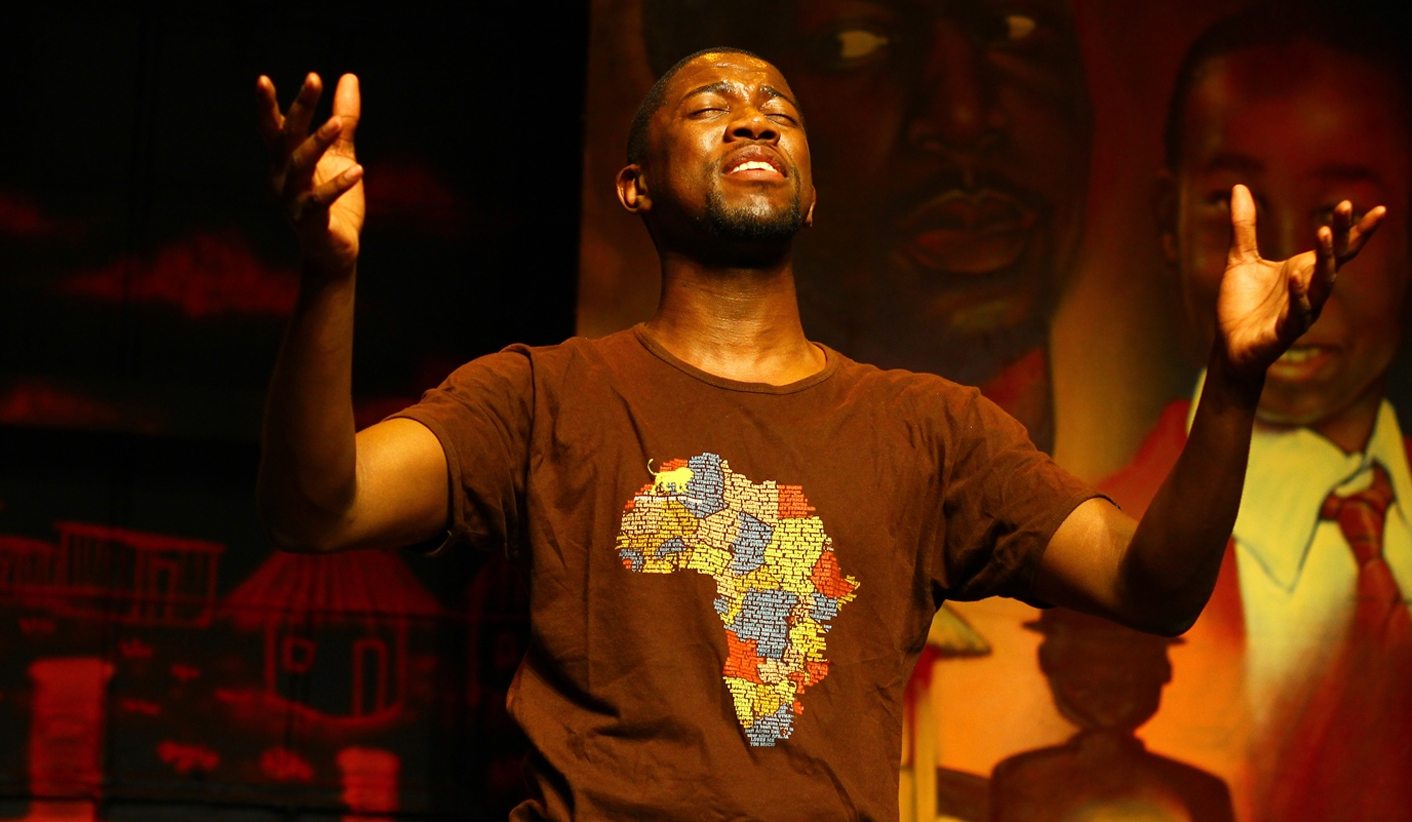 Hayani, while billed as a story of a generation nearly lost and forgotten, is not mired in post-Apartheid angst. By LESLEY STONES.

From the moment Atandwa Kani and Nat Ramabulana chug onto stage in a train-like formation, they have me grinning. Their bold movements and mesmerising words are about to bring a dozen different characters to life in Hayani, a refreshing play about growing up in the era when South Africa was changing.

Hayani means “home” in Venda, and home and a sense of belonging are the steady themes as the play builds up from a series of snapshots from the past.

It’s billed as “a heart-rending story of a generation nearly lost and forgotten”, which is a dreadfully heavy blurb for what is essentially a very funny and captivating show.

The two actors wrote the script along with director Warren Nebe, and it’s a step forward to see a play not mired in post-Apartheid angst. That’s not to say that bad things don’t happen in Hayani, or that everyone is equal. But Kani and Ramabulana present all their changing places and fortunes with warmth, affection and lashings of humour, not bitterness.

The boy living in a shed with his father who never invites his school friends home now turns into a white schoolboy, pondering why he is never invited in.

We laugh at it, the sad and the bad made funny. Obviously they have survived and thrived despite times of hardship and being passed from one parent to the other as circumstances changed but rarely improved.

Kani is brilliant as a wide-eyed child heading on the annual pilgrimage back to Port Elizabeth. He’s wonderful as the seductive woman dancing, and as the man whose eyes lock into hers as their romance begins. You can picture the smoky room, the drunks stumbling around behind and the magnetic pull between them.

Ramabulana is almost his equal, although more limited in his range of characters.

Together they weave luscious tales of previous lives in different places, which have affected who they are today. Physically they are brilliant too, clowning around, using every inch of the stage and spilling over it as they draw the audience into their stories.

They switch languages with ease, and my brain sadly doesn’t follow so fast. A couple of short vignettes in Venda had the audience in stitches, with enough action to let even the dumb-eared whities catch on.

Some more poignant moments were also in their home languages, so perhaps that’s why I found the sum of the play jollier than some of its parts.

They share the stage with musician Matthew MacFarlane, who strums his guitar to create an ever-changing background of music: soft and tender, jangling with excitement, silent for some of the poignant passages. It works brilliantly, never intrusive and always enhancing. The backdrops are also gorgeous, with large paintings of faces and little images of city and rural life by graffiti artist Mak1one.

Nebe the director has set a cracking pace, yet the ever-shifting scenes play out in different tones to create an array that fully reflects life’s highs and lows.

It’s an enchanting evening and a delight to see such talented actors bring their precious words to life.

Hayani will run at the Market Theatre until October 27. DM