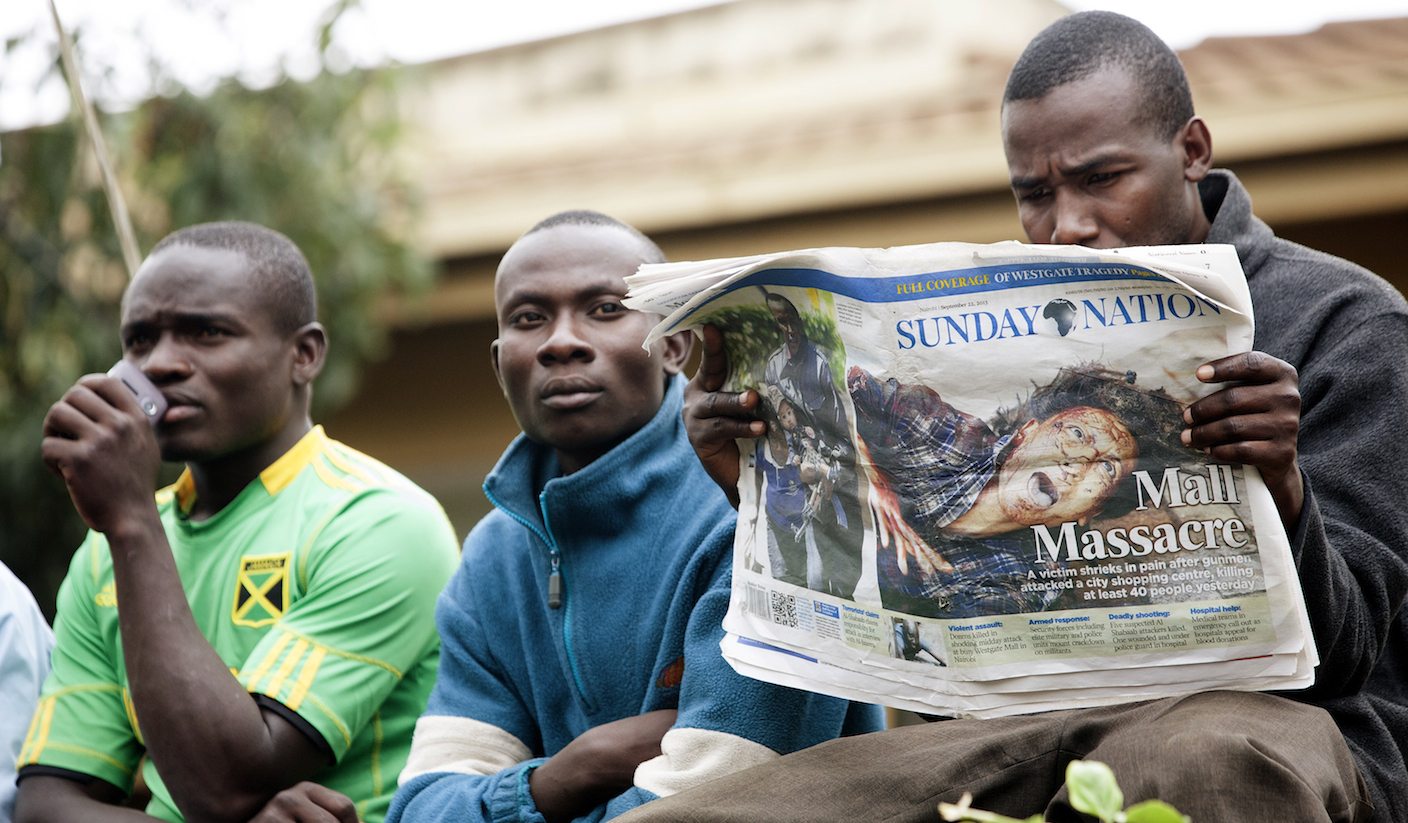 The siege may be over and the terrorists in custody, but the Westgate is still a smouldering ruin and there are bodies trapped in the wreckage. As Kenya’s leaders (no saints themselves) tackle the logistics of the clean-up operation, they’ve got a host of other difficult decisions to make. By SIMON ALLISON.

By Tuesday afternoon, more than three days after it began, Kenyan security forces were finally in full control of Westgate shopping centre, the scene of one of the worst terrorist attacks in African history.

“Fellow Kenyans, we have been badly hurt and feel great pain and loss, but we have been brave, united and strong. Kenya has stared down great evil and triumphed,” concluded President Uhuru Kenyatta in a televised address. “We have ashamed and defeated our attackers.”

His was an emotional speech, for this is an emotional time. According to the President’s figures, 67 people died in the fighting, including six security officers. Eleven suspects –“cowards”, said Kenyatta – are in custody, while another eight were dead on the scene, five from gunfire and three from a collapsing floor. Somali militant group Al-Shabaab has claimed responsibility for the attack.

While some details from the bloody stand-off are now emerging – for example, the attackers rented a shop in the mall to stock up on equipment beforehand – there are still more mysteries than answers. What accounted for the plumes of black smoke billowing out of the shopping centre on Monday? Kenyan authorities say burning mattresses, but witnesses heard explosions, and burning mattresses alone surely don’t explain why sections of the building collapsed.

Was there really a female terrorist, and if so, was it Samantha Lewthwaite, the so-called “White Widow” from Northern Ireland? How many attackers were there, and were some able to escape in the chaos?

The most important question, however, was the most basic: is the siege really over? Several Kenyan officials over the course of Monday and Tuesday had declared victory over the terrorists, only for more shots and explosions to be heard from within Westgate Mall. With Nairobi calm overnight, it seems this time the President was right.

The Kenyan government’s image has already been damaged, however, by the mixed, contradictory messages emanating from various departments, and the tendency of officials to cry wolf. “One of the victims of the siege at the Westgate mall in Nairobi, as it entered a fourth day, was the credibility of Kenyan authorities,” observed the Economist.

Not that the Kenyan authorities had much credibility to begin with.

While President Kenyatta spoke about conquering “the monster of terrorism”, it was hard not to remember he is hardly a paragon of virtue himself. He’s about to go on trial at the International Criminal Court in The Hague for his alleged involvement in crimes against humanity. Specifically, for orchestrating parts of the killing spree that followed Kenya’s disputed election in 2007-2008. The trial of William Ruto, Kenyatta’s deputy, has already started, although it has been adjourned to allow him to return home and play the responsible statesman.

It begs the question: when exactly does political violence become terrorism? Maybe Kenyans should be looking to conquer the monsters of terrorism within (and not electing them to public office).

Kenyatta did, at least, acknowledge that the repercussions of the attack are far from over, saying, “that part of our task has been completed”. He was referring to the end of the siege, but implying that Kenya’s task is bigger, and how right he is.

In the immediate aftermath of the attack the country must figure out exactly who was responsible and how they did it, come up with measures to prevent a repeat performance, commemorate the victims and treat the dozens of wounded, safeguard the half million or so Somalis who live in Kenya and who had nothing to do with the attack, convince the world that Kenya is still a safe place to invest and go on holiday, and re-assess its substantial military commitment to Somalia. It’s a grim, daunting to-do list.

There’s also a lot of hard work for everyone else involved in Somalia. Over the last year, journalists and diplomats have been pushing the idea that Somalia has turned some kind of corner and is on the road to recovery (a good news story questioned by the Daily Maverick). The bodies in Nairobi are proof that this narrative is, at best, pre-emptive. Somalia has a long way to go before it turns any kind of corner, and Al-Shabaab are far from defeated, even if, as some argue, the Westgate attack is actually a sign of their weakness.

But helping Somalia should not necessarily include huge bundles of cash and increased military support, neither of which has proved effective over the last two decades. (Al-Shabaab had its roots in a foreign military intervention.)

Right now, however, those are the only solutions on offer from the African Union and the international community. If something is to change, creative thinking is required (one different approach, for example, could be to stop investing so much in the ineffective central government in Mogadishu and instead devolve power to the various local authorities that are de facto governors, rewarding those, such as semi-autonomous Somaliland, who can provide peace and stability).

It’s a tough ask, there’s no doubt about it. But if Kenya, the African Union and the international community want to avoid a repeat of the Westgate massacre, they must somehow get Somalia right. DM

Photo: A man reads a daily newspaper with other onlookers at the edge of a security perimeter put into place near the Westgate shopping centre where gunmen are holding hostages, in Nairobi September 22, 2013. REUTERS/Siegfried Modola