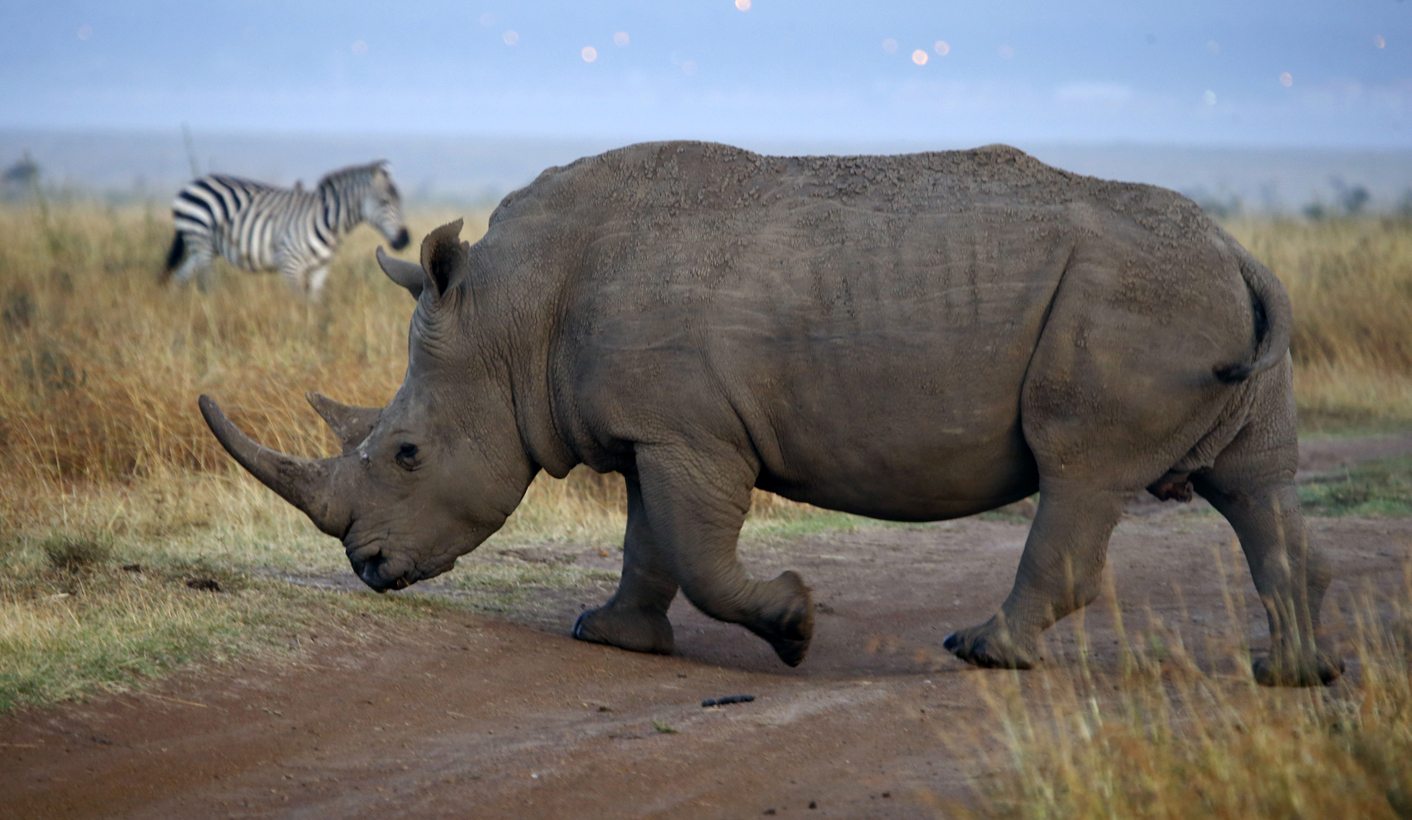 You can count on South Africans to make the most of yet another long weekend. Judging from the traffic on my social media accounts, a lot of you spent your quality time shouting at other people through the ether. Some of the chatter was about whose favourite TV show deserves to win more awards, or whose heritage is more authentic. Idiots. You could be braaiing, but instead you’re indoors, arguing about braaiing. But the most cretinous among you had earmarked your quality time to act as unpaid cheerleaders for rhinos. By the GRUMPY OLD MAN.

Picture the scene (read this paragraph in your head like David Attenborough): Two baby rhinoceroses pad their way through the short kikuyu grass, very, very, very slowly. As they browse absently from a bush, the elder one turns to its younger sibling and says: “Aren’t you glad that all those humans sent all those messages of love and support to us. I for one feel so much safer.”

Can you imagine? No, me neither. At least, not outside of the fever dream of some drugged-up art student with pretensions of working at Disney. It would be nice if cause and effect worked that way, but it doesn’t. Wishful thinking is just another ride at Disneyland I’m too old and full of bile to go on.

This rhino rah-rah club has gone completely over my head, a bit like an aeroplane. Those blood-red plastic horns on car bonnets? They look like inflamed penises. Every time I see one I involuntarily grab my family jewels, as if I have a sympathy STD.

Don’t misunderstand me; I have nothing against rhinos. They’re in my top three of the Big Five. Some of my happier holidays with the kids and the former Mrs N were at the Kruger Park. They are not, however, the most majestic beasts of the jungle. They are big, slow and virtually blind.

They have enormous horns in the middle of their foreheads, but no natural predators, which is a bit of a waste. The horn is effectively for show and is mostly made out of keratin, which is the same stuff that makes up hair and fingernails. Mammals have it in some form or another but, for some reason, enough idiots want rhino horn badly enough to pay other people to hack the horns from the living rhinos.

Rhinos are being poached and culled in such numbers that they face the threat of extinction. People are fussing around them because the rhinos are unable to help themselves, I understand that. It’s why the government keeps creating new departments for people who are unemployable outside of the public sector. The rhinos inspire more sympathy and contribute more to the national fiscus, but the principle is the same.

Support the rhinos? By all means, but do you have to choose the least effective and most annoying routes? Those plastic horns are like PowerBalance bracelets for your car. They announce to the world: “The person driving this car is a dickhead. She or he is wasting perfectly good money to make their car look stupid.”

Every day I drive to the university and I have to see these things. I curse them, and my hangover curses them.

The hashtag on Twitter, this #iam4rhinos malarkey, what is it all about? Roping in famous people and non-entities alike to publicly proclaim they are “for rhinos” is going to achieve exactly what, apart from spreading awareness about how important it is to like rhinos?

It’s the world’s most annoying chain letter, is what it is. “Tell everybody you know to like rhinos. John F, from Secunda, did NOT retweet this hashtag, and, seven hours later, another rhino was killed.”

The market for rhino horn is not difficult to understand. There is a supply and there is a demand. The supply is heavily limited and the demand is high. As a result, horns are ridiculously expensive. They sell for so much money that it’s become profitable for criminal syndicates to enter the market.

If people were smart or rational they’d try to increase the supply of horn, drive the price down and remove the financial incentives for criminals and poachers. Unfortunately that is not going to happen very easily. Those big dumb beasts breed too slowly, have too few calves and their horns take forever to grow.

There are stockpiles of horns, waiting to be sold, but there is no legal market for them. There are all sorts of objections to the sale of these stockpiles, including the desire to prevent the owners of such stockpiles from making ridiculous amounts of money from these sales.

I know, it seems terribly unfair that a few people could make a fortune from a few horns. What a terrible place the world is. Maybe in a decade or two, when you’re showing your grandchildren a stuffed rhino skin (or a rhino hologram or a rhino robot or whatever) you can proudly claim that you didn’t compromise your principles and allow market forces to save the rhino.

Let’s accept that the supply side of the market is broken and won’t be fixed soon. That leaves us with just the demand side of the equation. If we can’t increase the supply of horns, we’ll have to reduce the demand for them.

Demand is a funny thing, influenced by so many different factors. Apparently there’s a demand for rhino horn in Yemen. It gets turned into ornate dagger handles. And, of course, there’s a big demand for horns in Vietnam and other bits of southeast Asia. Over there they grind up the horn and drink it to cure hangovers and small genitalia and so forth.

When one rhino lover posts a message on the Internet that is read and redistributed by other rhino lovers, it does nothing to affect the demand for rhino horns. I’m sorry to be the bearer of cold hard facts but your deep and abiding love for rhinos is not the magical variable that balances the equation; it doesn’t cancel out the poachers’ lack of love and empathy for rhinos.

These simple truths provoke such powerful responses from people. I know you have feelings, and they are so profound and painful and important that they make you post in CAPS with lots!!! of exclamation marks. Can you magically turn your feelings into, say, a large private game reserve with barbed wire and anti-poaching measures? You can’t? Well, I don’t know what to say to you then except that, yes, your feelings are largely useless and of no value to anyone except yourself. Sorry.

You know what might work, if you are prepared to get off your large, fleshy arse and put in some real work? You could petition the South African government and ask them to break off trading relations with Vietnam, Yemen and the rest. You could point out that poaching is robbing our country of tourism money and suggest we launch countervailing duties against the offending countries.

You could track down the stories of all the stupid celebrities who boast about their rhino horn consumption and drag their names through mud using websites, petitions, negative advertising campaigns and so on. Make these morons the object of ridicule and hatred.

In fact, don’t stop there. Launch negative campaigns against the countries themselves. Tell anyone who will listen just how backward and stupid the Vietnamese are. One advertising company created a mock-up picture of a panda whose nose had been hacked off by poachers. Why stop there? Let’s actually chop off a few panda noses and send them, with the blood still fresh, to a few top-ranking officials from the relevant countries.

You kill our mascot, we kill yours back. The panda is even more sex-averse and slow to breed than the rhino, so killing a couple of them is a credible threat. A recipe book for panda flank, sponsored by a leading supermarket chain, will help to drive the message home.

You could keep buying those plastic horns and sticking them on your car bonnets. They’re probably made in one of the countries where our rhino horns are consumed, so you might be rewarding the criminals when you show your solidarity. Just an idea to think about – an object lesson in perverse outcomes, if you will.

Instead of buying the plastic horns, maybe you could club together with other people and save enough money to buy a real rhino on a game reserve somewhere. Wouldn’t that be useful?

Instead of spending time composing messages of love and solidarity with the rhinos, you could be contributing to a coordinated campaign of hate aimed at the people killing our majestic, functionally blind animals. Instead of the endlessly circular back patting you could deliver an open smack to the offending parties.

The rhino killings should not be framed as a debate where the side with the better argument or the more passionate supporters wins. This is a bloody, messy war and the other side thinks nothing of eating our rhinos on a whim. We need to stop extolling the virtues of the rhinos, and we need to start pointing out how truly awful their killers, and their customers, are. DM

Photo: A rhino and a zebra cross a road at Nairobi’s National Park March 11, 2013. The park is located just 7 km (4 miles) from the Kenya’s capital city center. REUTERS/Marko Djurica