Wikipedia: The Empire writes back 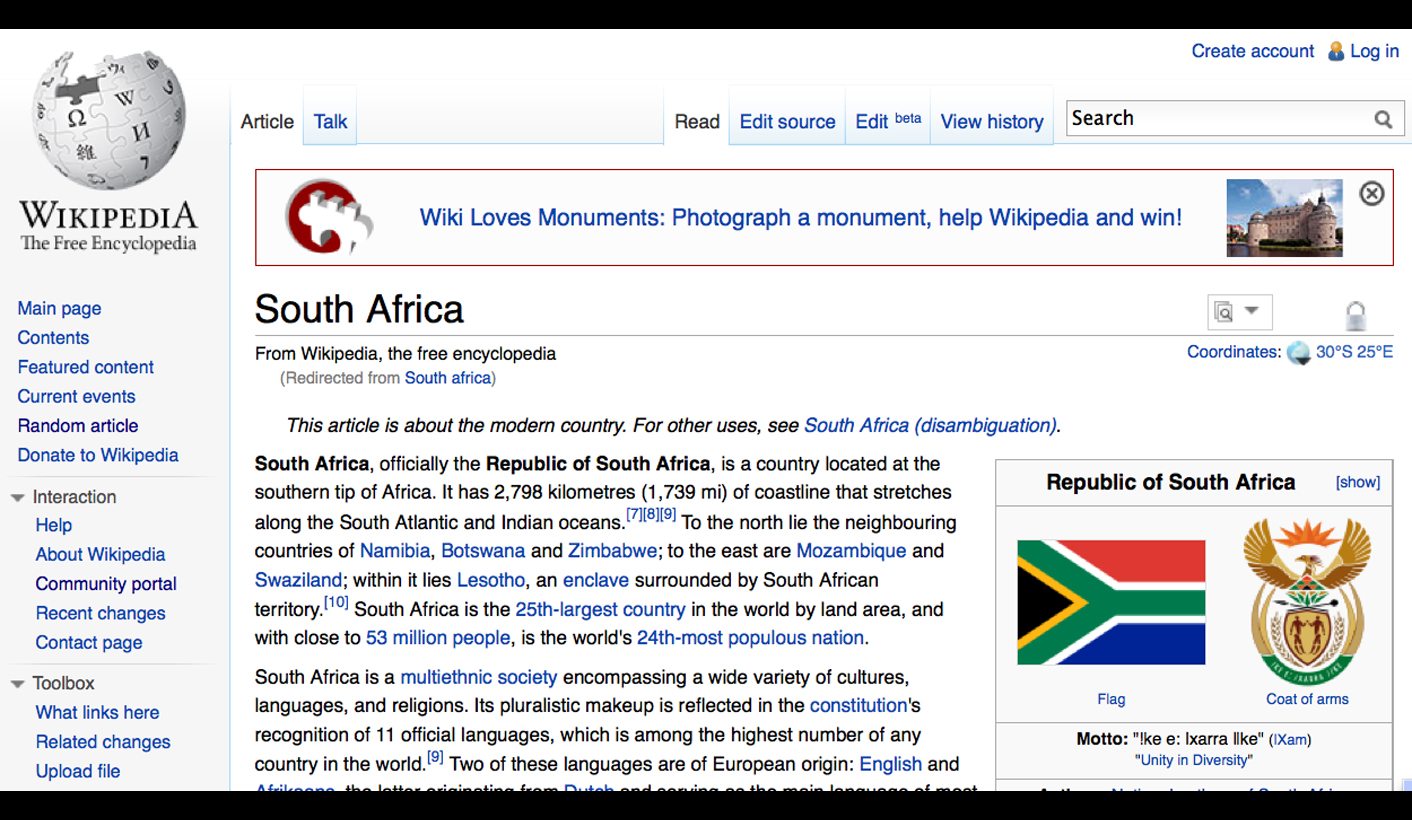 Less than 10% of Wikipedia entries are created by people outside Europe and North America. What this means is the available information on countries like South Africa is often incomplete, inadequate or inaccurate, but a new initiative aims to change that. Thursday saw South Africa’s first WikiWordathon take place in Cape Town and Johannesburg, bringing together writers, broadcasters and academics to start tackling the task of telling South Africa’s stories online. And they need the public’s help. By REBECCA DAVIS.

Do you have a passion for monkey gland sauce? Are you interested in the mythical serpent Inkanyamba? Could you explain to the world what a bergwind is? If so, consider this your conscription papers to join the Wikipedia Wordathon project. Monkey gland sauce, Inkanyamba and bergwind are just three of the topics currently dealt with on Wikipedia via a “stub” – not a full article. There are countless further South African subjects that have no treatment on Wikipedia at all.

In July, to mark the 50th anniversary of the Liliesleaf Raid, radio station 702 created a Twitter account to tweet the events leading up to the raid (which led to the capture of the Rivonia Treason Triallists). During the raid a total of 156 people were arrested, but when Primedia’s Colin Cullis turned to Wikipedia to find out the identity of all 156, he was disappointed to find that there were entries only for a handful of them.

“For Mandela Day, I invited my colleagues to update the entry. But what we found is that accessing the necessary information is quite difficult,” Cullis explained on Thursday. Some of the needed facts could be best obtained only from relatively inaccessible library books. “That’s when we started realizing: ‘Wow, there’s a lot of stuff missing’.”

The Wikipedia Wordathon is a collaboration between Lead SA, Primedia and Independent Newspapers, with the help of Wiki Africa and its project manager Isla Haddon-Flood. Haddon-Flood explains that South Africa has its own Wikipedia chapter – a group of volunteer editors endorsed by the Wikipedia Foundation who then activate the project within the country. The only other African chapters are found in Kenya and Egypt.

“The majority of Wikipedia entries are written by editors in America and Europe,” Haddon-Flood says. “That has obvious problems when these people may never have been to Africa, Asia, or South America.” As a result, she says, historical entries on Africa are often particularly problematic.

“What is fed to them might be dates, but especially in Africa, with contested spaces, colonisation and so on, it gives history often from only one perspective. So Shaka Zulu, for instance, might only be described as a ‘noble opponent’, not as a chief, or in terms of his role within his own culture.”

Of course, interpretations of South African history are equally likely to be given contrasting slants by different South Africans. But that’s not a problem, Haddon-Flood says, as long as the sources of information in articles are cited, and reputable. Indeed, Wikipedia editors are famous sticklers for requiring secondary sources.

Haddon-Flood tells the story of how Wikipedia founder Jimmy Wales started the Wikipedia entry for Mzoli’s, the shebeen in Gugulethu popular with tourists. Wales had just visited Mzoli’s, was taken by it, and wanted to see it gain its own Wikipedia presence. But the entry was promptly whipped offline by other Wikipedia editors because it didn’t contain links to any sources, and the mere fact of Wales having visited it was not considered sufficient proof of its existence.

The fear of facing the wrath of other Wikipedia editors may be a factor in why more people don’t get involved with the editing, Cullis concedes. When he approached journalists and broadcasters to participate in Thursday’s event, he says almost everyone was apprehensive in advance.

“Most people were like, Nice, but maybe not for me,” Cullis says. “There seems to be a barrier between using Wikipedia and feeling capable of contributing to it.”

Indeed, most of Thursday’s participants seemed to begin by tackling rather “safe” topics. Eyewitness News’ Cape Town editor, Gasant Abarder, for instance, devoted himself to fleshing out the entry on koeksisters. I chose an even more tentative route with some gentle factual edits to the Daily Maverick’s own Wikipedia page, until Haddon-Flood gently informed me that Wikipedia editors might view my obvious bias on this matter with suspicion. But the editing is technically quite easy to manage, and you can see how the process might become addictive, particularly given the wealth of information South Africans have to contribute.

After being directed to the Wikipedia page on White South Africans, I found my editing feet quite quickly out of sheer annoyance at the misinformation being propagated about white poverty in the entry. Cullis says he thinks this is a particularly strong motivation why many people get involved with the editing. “I’m sure there’s a very strong psychological reason why we’re all so keen to point out errors,” he says. “Wikipedia should tap into that.”

Getting only a tiny glimpse of the amount of erroneous information on South Africa on Wikipedia currently does make one rather concerned about the general accuracy of Wikipedia entries. But those in the know say this isn’t justified. “I get really frustrated by that idea,” Creative Commons’ Kelsey Wiens told me. “Two studies on the accuracy of Wikipedia have found that it’s pretty much as accurate as the Encyclopaedia Britannica.”

One of Wikipedia’s vocal South African advocates is renowned Wits paleoanthropologist Lee Berger, who participated in Thursday’s events from Johannesburg. It’s been suggested that South African university students would make excellent Wikipedia editors, since they are constantly researching topics for essays, which then get tucked away and forgotten. Both UCT and Wits this week put out calls to their students this week to take up the cause.

“We can’t actually expect other people to write the story of Africa,” Haddon-Flood says. “We have to write it because we’re living it.” DM

To get started as a Wikipedia editor, click here.