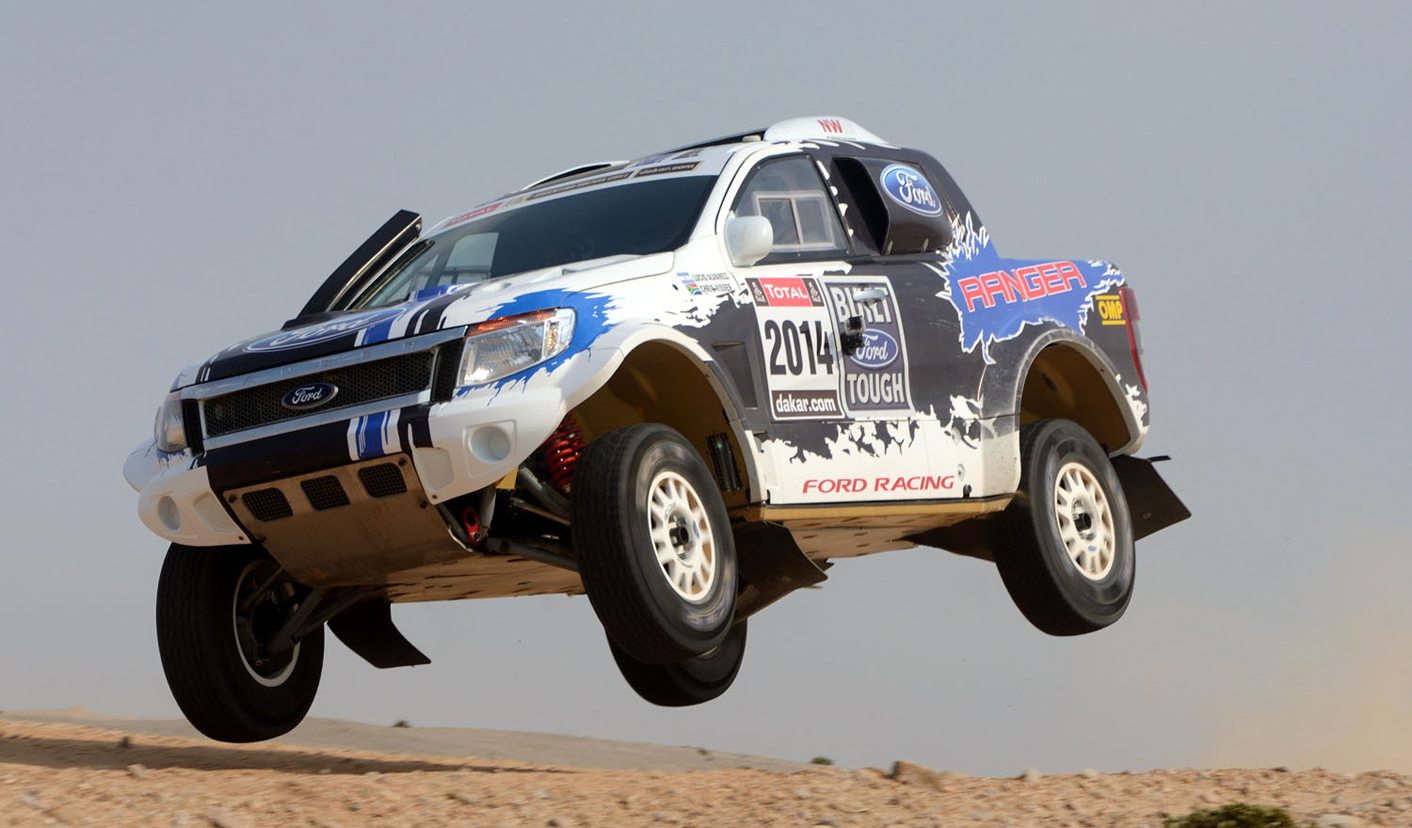 The Dakar Rally Raid is arguably motorsport’s most gruelling event: an 8,500km, 14-day odyssey traversing a huge variety of highly challenging terrain on the South American continent. Tackling the 2014 edition will be two Ford Ranger pick-ups, purpose-built for the event in a workshop in Pietermaritzburg, South Africa. DEON SCHOEMAN travelled to Namibia to meet the team during the Racing Ranger’s first real shakedown in the dunes.

WALVIS BAY, Namibia. At first, you only hear the noise – a harsh, guttural bellow that dips and rises as the yet unseen machine does battle with the undulating terrain. The landscape is lunar in its desolation, with a mix of pale sand and scrubland that looks forbidding.

Then, in the distance, the vehicle appears, weaving and bobbing like a prizefighter. The approach speed is astonishing, given the conditions underfoot: tricky little knee-high dunes, thick sand and a sprinkling of rocks. Hardly a highway then, but that doesn’t seem to faze the driver.

As it gets closer, you recognise the blue and white Ford livery. Yes, it’s a pick-up. Actually, make that a bakkie – a Ford Ranger bakkie, to be precise. Except this one is quite unlike the standard Rangers manufactured in Ford’s Silverton, Pretoria assembly plant.

Besides the bold racing livery, it’s the aggressive bodywork, including wide-flared fenders, massive metal scuff plates, and a large roof-mounted air scoop, that set this Ranger apart from its production brethren. It’s also a lot louder, thanks to big-bore exhaust exiting just below the passenger door. And it’s shorter, which makes the front end look even more purposeful.

Overhangs have been radically trimmed to optimise approach and departure angles, and behind the lightweight wheels and rugged Michelin tyres, you can clearly see the workings of a bespoke, independent suspension system that definitely didn’t originate from the Ford factory.

No, this is by no means an ordinary Ford Ranger. It’s a bespoke racing machine, designed and built with only one goal in mind: to conquer the Dakar Rally. And significantly, the vehicle spearheading the global Ford brand’s Dakar aspirations hails not from Dearborn or Cologne, but from South Africa.

Pietermaritzburg, colloquially known as Sleepy Hollow, is the unlikely spawning ground for this Dakar racer. The KwaZulu-Natal university town is home to Neil Woolridge Motorsport, where the Ford Racing Ranger was designed and built in the NWM workshop.

A seasoned motorsport competitor, Woolridge has enjoyed a long and successful association with Ford in the South African off-road racing championship. But his NWM outfit has also been responsible for developing and building a succession of Ford LCV-based off-road racing pick-ups, including the factory-backed vehicles currently contesting the SA cross-country championship.

The Dakar Ranger is a close relative of the local-specification vehicles, but has been purpose-built to conform to Dakar-specific FIA regulations. Construction is world class, using complex, custom jigs that ensure perfect part fitment and repeatable quality and safety standards.

The Ranger now idling menacingly only a few metres away is the first of the two 2014 Dakar vehicles to be completed, and has been brought all the way to Namibia for extensive development testing. The man strapped in behind the wheel is somebody who already knows exactly what to expect when the Dakar kicks off on 5 January next year.

Argentinean off-road ace Lucio Alvarez is a Dakar veteran, with a 5th place overall in the 2012 race to his credit. This year, a podium finish seemed certain, until mechanical gremlins dropped him and navigator Ronnie Graue well down the field. Perseverance saw them clamber back up to 10th at the finish.

It’s that mix of experience and sheer grit, together with a need for speed, which makes Alvarez the perfect choice for the Ford Ranger’s Dakar debut. And the feisty South American is pleased with the progress made thus far.

“I think the car is good – surprisingly good, if one considers how quickly this project has come together. This is a brand new vehicle, but already, it is performing very well. It has a good balance, and there have been no major problems.”

For Woolridge and the team of engineers and technicians, the feedback is encouraging, and vindicates the Herculean effort that went into getting this first Ranger ready. “It’s almost too good to be true,” the quiet-spoken Woolridge says. “We’ve covered more than 2,000 km of race-pace testing, and there hasn’t been a single significant failure.”

Not that the vehicle is perfect. “We have made a long list of little things that need to change,” says Alvarez. “But I think this is normal – and there is enough time to make those adjustments. When we test again, we’ll see just how much progress has been made. But I’m already thinking that the Ranger is good enough to fight for a top-10 finish, maybe even a top five.”

Bullish sentiments, yes, but tempered not only by the Argentinean’s experience, but also by the validity of the Namibian terrain. “I can’t think of another place in the world where there is so much variety – fast gravel, rough and rocky, sand, and big, big dunes. It has everything you can expect to encounter on the Dakar.”

“It’s a dream come true,” says a grinning Visser. “It really is the ultimate challenge, and to have the opportunity to give it a real go is … well, just unbelievable.”

The Vryburg farmer and transport business owner is under no illusions that it will be tough, however. “It’s a very long, very hard race. And we’re well aware of the fact that we lack the experience of seasoned competitors like Lucio and Ronnie. That’s why it’s great to have them in the team – we’ll benefit hugely from their guidance and advice.”

Co-driver Badenhorst’s Dakar aspirations will be made especially difficult by the navigation system used in the Dakar, which is completely different to that employed in local cross-country racing. “I still have a lot to learn, but I’m confident that I’ll have it under control by the time we fly to Argentina,” he says with a wry smile.

The two Ford Rangers won’t be the only SA-built racing vehicles in the Dakar. Toyota SA Motorsport will be fielding two Imperial-backed Hilux bakkies for the third year running, with former Dakar winner and 2013 runner-up Giniel De Villiers again the lead driver.

In fact, South Africa is fast gaining a reputation as a source of highly sophisticated, robustly engineered, bakkie-based Dakar vehicles. Toyota Motorsport boss Glyn Hall has sold a number of race vehicles to international customers, and Woolridge is hoping to do the same with the Ford Ranger package.

The appeal of the SA-made bakkies is that they cost about a third of the price of a bespoke Dakar race vehicle like the X-Raid team’s Mini, yet have real race-winning potential, thanks to a pedigree of performance and reliability earned in the local cross-country racing championship. That De Villiers was able to challenge for the lead this year, despite a deficit in power, augurs well for the SA-made racing bakkies.

While the Ranger is an unknown quantity for now, Alvarez (who campaigned an SA-sourced Hilux before) believes it measures up well to the Toyota, and should be in with a fighting chance. “Perhaps it’s too much to expect a victory in 2014. Much depends on how rapidly we can develop and fine-tune the Ford. But I hope to be going for the win in 2015.”

Even the team’s logistics, which include sourcing six-wheeler support trucks, and race-prepared trucks that compete to provide in-race assistance, as well as providing the fuel, team management, technical support and thousands of litres of fuel, has a South African slant.

Those logistics will be provided by South Racing, a Germany-based firm owned by expat Scott Abraham, whose late father, Arthur, played a larger-than-life role in the development and promotion of off-road racing here. Abrahams’ previous experience with both the Mini X-Raid and the Toyota Overdrive teams will be invaluable in the Ford Dakar project, too.

It’s impressive enough to watch the Ford Racing Ranger negotiate seemingly impassable terrain at the kind of speeds that would have our laser camera-wielding constabulary rubbing their hands in glee. But experiencing the vehicle’s dynamics from the co-driver’s side borders on the surreal.

Strapped into the racing seat, with Visser acting as chauffeur, my brain struggles to compute just how we can be travelling at speeds in excess of 160km/h when the unforgiving nature of the terrain suggests that anything more than a snail’s pace would be lethal.

Accompanied by that mighty V8 bellow, the Ranger simply ploughs across, over and through whatever happens to be in its path, with Visser far too relaxed for my liking. He even has time to chat about the Ranger’s attributes as we go airborne, again, before dodging a particularly nasty boulder, and then slithering through a fast, rock-strewn sweep.

“This Dakar-spec vehicle is not dissimilar to the Ranger I use for the local championship. The biggest difference is the independent rear suspension, while the weight distribution has also been optimised. The steering is really quick and responsive, but we still need to fine-tune the suspension settings.”

In the dunes, the Ranger is sublime, plunging down impossibly steep slip faces, powering up what seem like sheer walls of sand, and negotiating treacherous side slopes with almost ridiculous ease. It’s a majestic sight.

As the sun hurtles towards the horizon, the Atlantic’s chilly breeze chases us back to base. The Ford Racing team’s sense of optimism is almost tangible: the test has not only been a hugely valuable exercise, but it’s resoundingly confirmed the Dakar Ranger’s potential.

Next year’s Dakar Rally will be watched by a billion people around the globe. With the Ford Rangers joining the other South Africans on four and two wheels contesting the most gruelling race on earth, expect local interest to be at fever pitch when the 2014 Dakar gets underway on 5 January.