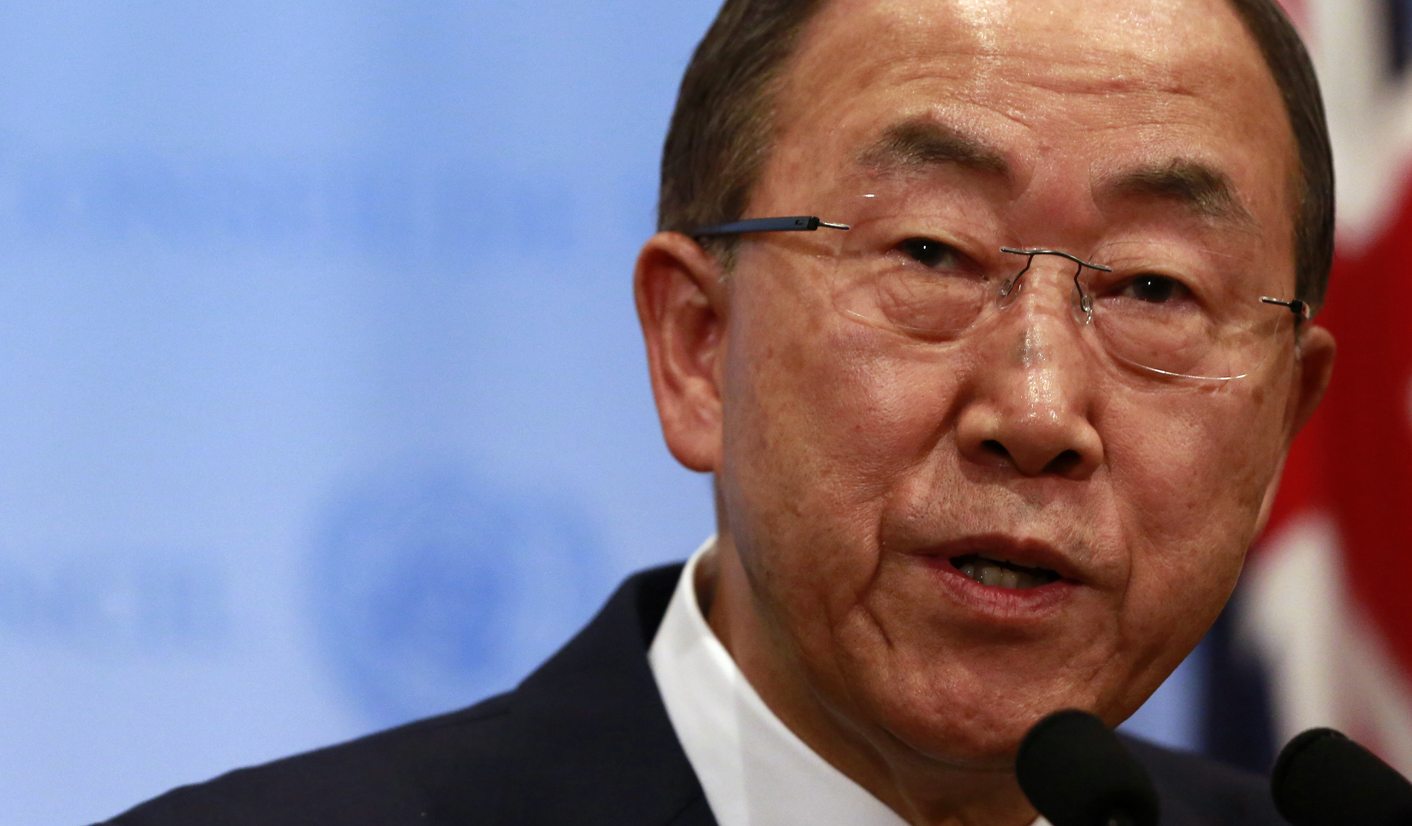 The United Nations on Wednesday defended its report on a Syria gas attack that Russia deemed one-sided as envoys from the five big U.N. powers met for a second day of talks on a Western-drafted resolution on eradicating Syria's chemical arsenal. By Louis Charbonneau and Michelle Nichols (Reuters).

The United Nations said the conclusion by its chemical weapons experts that rockets loaded with sarin gas were used in an Aug. 21 attack in a Damascus suburb should not be questioned.

“The findings in that report are indisputable,” U.N. spokesman Martin Nesirky told reporters. “They speak for themselves and this was a thoroughly objective report on that specific incident.”

U.N. chemical investigators led by Ake Sellstrom of Sweden confirmed on Monday the use of sarin nerve agent in the attack outside the Syrian capital in a long-awaited report that the United States, Britain and France said proved President Bashar al-Assad’s forces were responsible.

Russia stepped up its criticism of the report by denouncing Sellstrom’s findings as preconceived and tainted by politics. Russia, like Assad’s government, says the rebels carried out the attack, which the United States says killed more than 1,400 people, including more than 400 children.

“One cannot be as one-sided and as flawed as we have seen, laying the full (blame for the) incident in Ghouta upon the Syrian government,” Russian Deputy Foreign Minister Sergei Ryabkov said in Damascus, referring to Western nations’ interpretation of the report on the Aug. 21 attack.

The U.N. defense of the report came as envoys from Russia, the United States, Britain, France and China met again on a draft resolution that would demand the destruction of Syria’s chemical arms in line with a recently agreed U.S.-Russian deal.

Moscow, Assad’s ally, said on Wednesday the U.S.-British-French draft resolution supporting a deal for Syria to scrap its chemical arms should be limited to that purpose, suggesting Moscow would oppose any threat of force in the event of Syrian non-compliance at this stage.

Ryabkov said the text should support an expected decision by the Organization for the Prohibition of Chemical Weapons backing the U.S.-Russian deal “and nothing more than that.”

Lyall Grant said earlier the point of the Western draft resolution was to require Syria to live up to its pledge to relinquish its chemical weapons program.

“The heart of this resolution and its main purpose is to make the framework agreement reached between the United States and Russia in Geneva and the decision that will be taken by the OPCW Executive Council endorsed by the Security Council in a legally binding, verifiable and enforceable form,” he said.

U.N. diplomats said it remained unclear when a vote on the Security Council resolution could take place. They said they hope to approve it before world leaders arrive next week for the annual meeting of the U.N. General Assembly.

The current draft does not explicitly rule out the use of force, although Western diplomats said they might be willing to include such language if Russia insists.

Under the U.S.-Russian deal reached over the weekend, any punitive measures would require a second council resolution.

Nesirky said the chain of custody of all environmental and biomedical samples taken by the inspectors was meticulously documented. He said the experts would return to Syria as soon as possible to continue their investigation into a March incident at Khan al-Asal and all other “credible allegations.”

Sellstrom’s mandate was limited to investigating whether chemical weapons were used, not who used them. But Western officials say technical details in the report provide clear evidence that Assad’s forces carried out the attack.

The advocacy group Human Rights Watch said on Tuesday that rocket trajectories detailed in the U.N. report suggested the sarin-filled shells had been fired from a base belonging to the Republican Guard, run by Assad’s brother, Maher.

Diplomats in New York said Churkin questioned some of the findings in Sellstrom’s report at a Security Council meeting on Monday. Churkin, they said, asked Sellstrom to describe the quality of the weapons that dispersed sarin.

“The rockets found on the site were professionally made and, according to Dr. Sellstrom, they bore none of the characteristics of jerry-rigged, improvised weapons,” Power said on Tuesday.

“They had sophisticated barometric fuses to disperse the nerve agent in the air and not on impact,” she said. “This was a professionally executed massacre by the regime, which is known to possess one of the world’s largest undeclared stockpiles of sarin.”

Churkin asked Sellstrom other questions during Monday’s council session, diplomats said. Sellstrom was able to answer Churkin’s questions without difficulty, they said, including the chain of custody of the samples and how the inspectors could be sure the victims they took biomedical samples from had been in the area at the time of the attack. DM

Photo: United Nations Secretary-General Ban Ki-moon speaks to the media after briefing the Security Council on the U.N. chemical weapons report on the use of chemical weapons by the Syrian Arabic Republic at the United Nations in New York September 16, 2013. U.N. chemical investigators on Monday confirmed the use of sarin gas in an August 21 poison gas attack in the suburbs of Damascus, noting that weather conditions at the time ensured the maximum number of people were killed. REUTERS/Shannon Stapleton