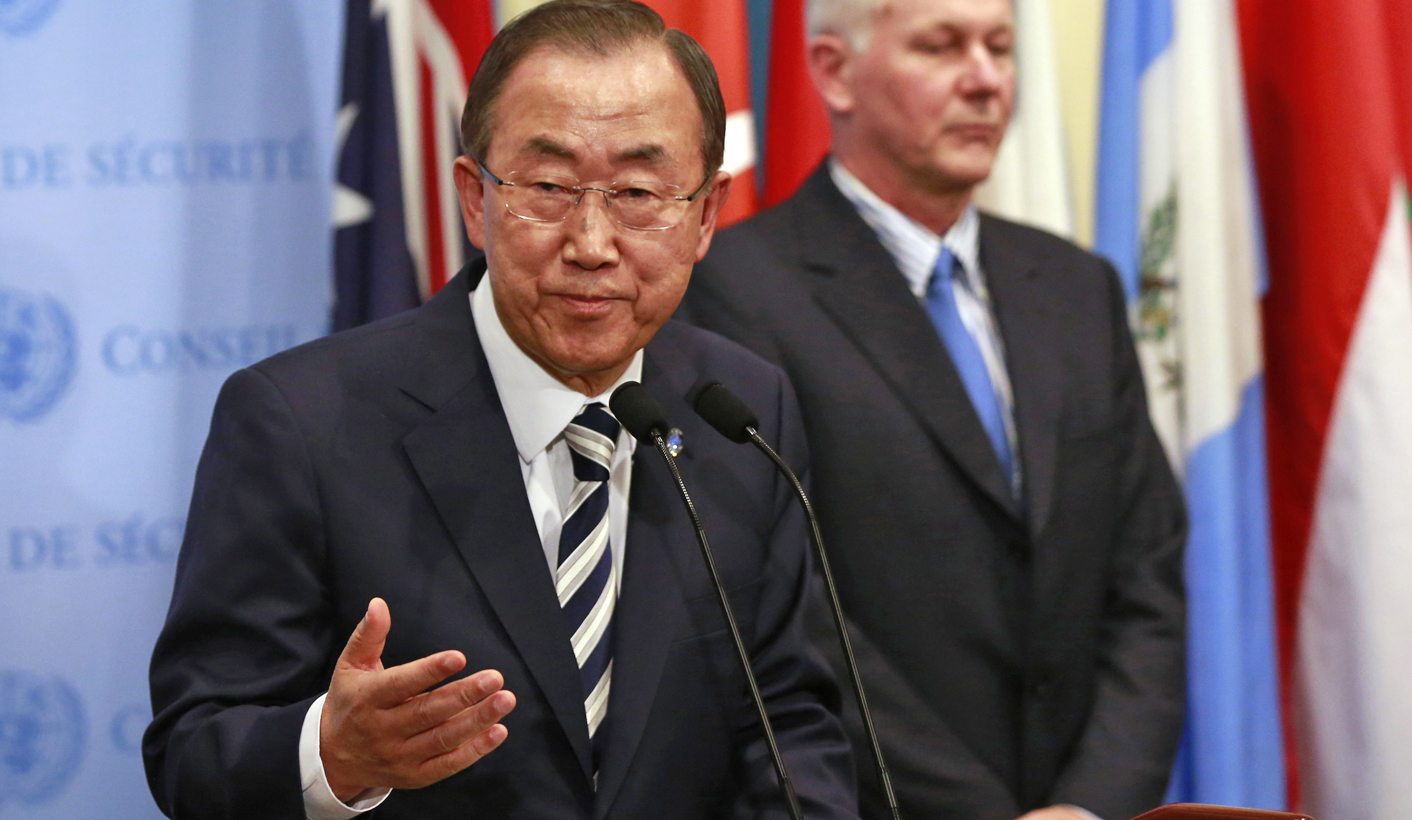 UN chemical investigators on Monday confirmed the use of sarin nerve agent in an Aug. 21 poison gas attack outside the Syrian capital in a long-awaited report that the United States, Britain and France said proved government forces were responsible. By Louis Charbonneau and Michelle Nichols.

“This is the most significant confirmed use of chemical weapons against civilians since Saddam Hussein used them in Halabja (Iraq) in 1988,” U.N. Secretary-General Ban Ki-moon said. “The international community has pledged to prevent any such horror from recurring, yet it has happened again.”

The U.N. team was investigating only whether chemical weapons were used in a deadly assault on the rebel-held Damascus suburb of Ghouta. The report does not say who launched the attack, though U.S., British and French envoys said technical details in it pointed to government culpability.

“On the basis of the evidence obtained during the investigation of the Ghouta incident, the conclusion is that chemical weapons have been used in the ongoing conflict between the parties in the Syrian Arab Republic, also against civilians, including children, on a relatively large scale,” said the report by chief U.N. investigator Ake Sellstrom of Sweden.

“In particular, the environmental, chemical and medical samples we have collected provide clear and convincing evidence that surface-to-surface rockets containing the nerve agent sarin were used,” it said.

The report said the weather conditions on Aug. 21 ensured that as many people as possible were injured or killed. Temperatures were falling between 2 a.m. and 5 a.m., it said, which meant that air was moving downwards toward the ground.

“Chemical weapons use in such meteorological conditions maximizes their potential impact as the heavy gas can stay close to the ground and penetrate into lower levels of buildings and constructions where many people were seeking shelter,” it said.

The results of Sellstrom’s investigation are not surprising. Several weeks ago U.S. Secretary of State John Kerry announced that sarin had been used in the chemical attack on the Ghouta region. The United States has said that 1,400 people were killed, including more than 400 children.

“This was a grave crime and those responsible must be brought to justice as soon as possible,” Ban said.

On Friday, Ban said Syrian President Bashar al-Assad “has committed many crimes against humanity,” though he did not specifically blame him for the Ghouta attack. He added that Assad would be held to account for his crimes.

Syria and Russia have blamed the Aug. 21 attack on the rebels. The rebels, the United States and other Western powers blame forces loyal to Assad for the Ghouta attack.

It was not immediately clear whether any of the details in the report suggested culpability.

British, French and U.S. envoys told reporters the U.N. report left no doubt that Assad’s government was responsible for the chemical attack. The opposition Syrian Coalition said the report “clearly shows that only the Syrian regime could have carried out these attacks.”

Russian U.N. envoy Vitaly Churkin countered that there was no scientific proof government forces were responsible for the attack. “We need to not jump to any conclusions,” Churkin said.

Syrian U.N. Ambassador Bashar Ja’afari did not respond to requests for comment on the report.

“We have associated one type of munition cited in the UN report – 122 mm rockets – with previous regime attacks,” she said. “We have reviewed thousands of open source videos related to the current conflict in Syria and have not observed the opposition manufacturing or using this style of rocket.”

British U.N. Ambassador Mark Lyall Grant said the rocket samples examined had a payload of 350 liters (92 gallons), which was 35 times the amount used in the Tokyo subway attack in 1995.

“Mr Sellstrom confirmed that the quality of the sarin was superior both to that used in the Tokyo subway but also to that used by Iraq during the Iraq-Iran war,” he told reporters.

“This does not point to a cottage industry chemical,” said Lyall Grant, taking a swipe at earlier comments by Churkin. Churkin said in July that a Moscow analysis found “cottage industry” quality sarin gas was used in an alleged March 19 attack, which he blamed on the rebels.

The U.N. investigators studied five impact sites and were able to determine the likely trajectory of the projectiles at two sites: Moadamiyah and Ein Tarma.

Eliot Higgins, who blogs under the name of Brown Moses and has been tracking videos of weapons used in the Syria conflict, wrote that he has not seen the opposition using the munitions identified in the report: a variant of the M14 artillery rocket and a 330 mm caliber artillery rocket.

Rebels have seized all kinds of weapons from military depots across the country in the 2 1/2-year civil war that has killed over 100,000 people, according to the United Nations.

But Amy Smithson, a chemical weapons expert at Monterey Institute, said the Aug. 21 attack bore “so many hallmarks of a military trained in chemical warfare doctrine” and not an untrained force. She said the army has chemical delivery systems the rebels lack.

The U.N. confirmation of sarin gas use on Aug. 21 comes as France, Britain and the United States agreed in Paris to seek a “strong and robust” U.N. resolution that sets binding deadlines on removal of chemical weapons.

Those talks followed a weekend deal on Syria’s chemical weapons reached by the United States and Russia that could avert U.S. military action to punish the government for Aug. 21.

Ban urged the Security Council consider ways to ensure enforcement and compliance with the U.S.-Russia plan. “I agree there should be consequences for non-compliance. Any use of chemical weapons by anyone, anywhere, is a crime,” he said. DM

Photo: United Nations Secretary-General Ban Ki-moon speaks to the media after briefing the Security Council on the U.N. chemical weapons report on the use of chemical weapons by the Syrian Arabic Republic at the United Nations in New York September 16, 2013. U.N. chemical investigators on Monday confirmed the use of sarin gas in an August 21 poison gas attack in the suburbs of Damascus, noting that weather conditions at the time ensured the maximum number of people were killed. REUTERS/Shannon Stapleton.