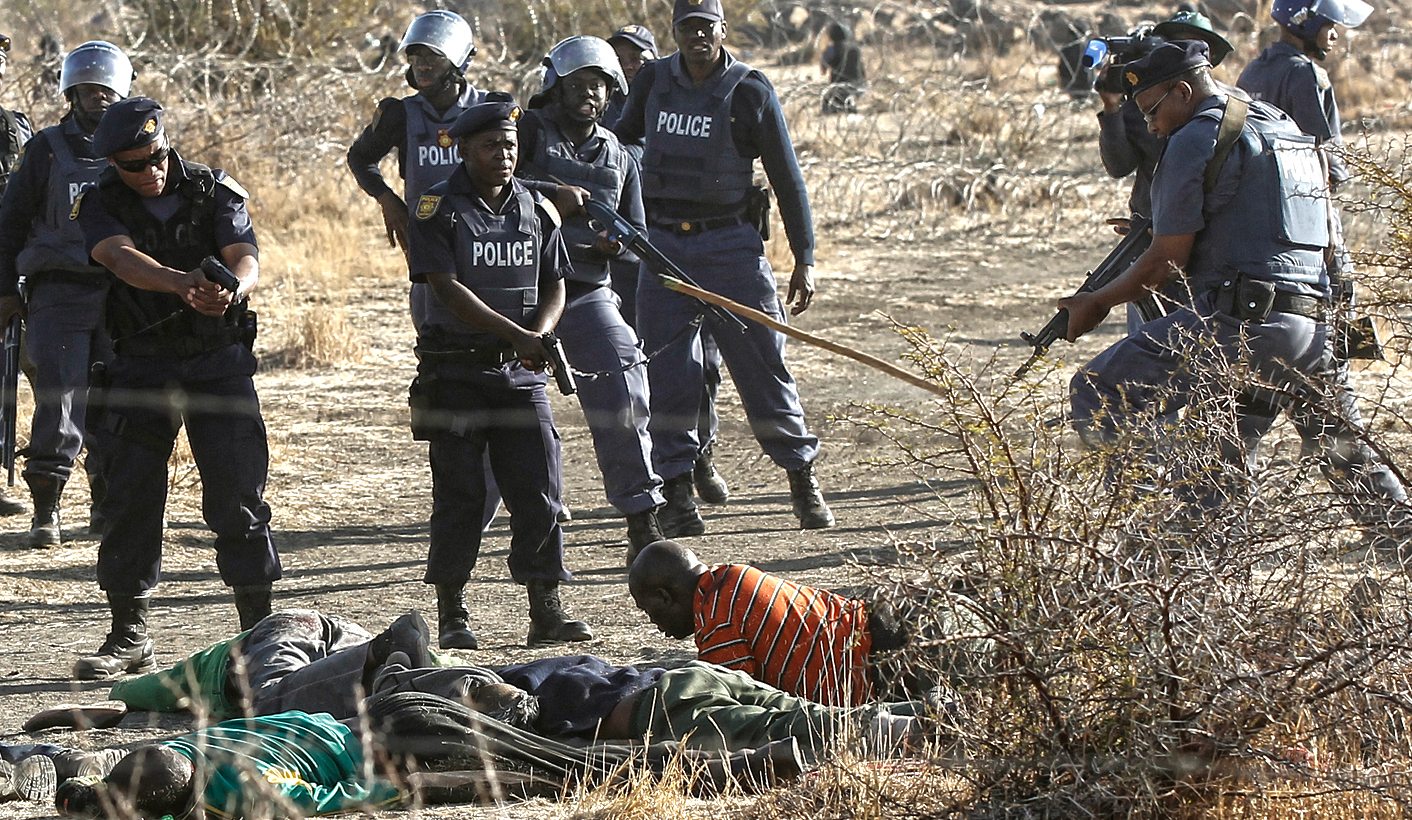 The breakthrough at the Marikana Commission was always going to happen when a police officer decided he was not willing to carry the can for his superiors. As issues of relevance have beset the Commission and justice for all parties, a chink has been opened in the police’s solid blue line of lies about what really happened on 16 August 2012. Trying to save himself, the officer charged with setting up the plan has exposed what looks to be a massive police cover up. By GREG NICOLSON & GREG MARINOVICH.

The Special Task Force’s lieutenant colonel Duncan Scott was appointed to coordinate the plan to disperse and disarm the Marikana protestors. In the days after the police shot 34 people dead and wounded another 270, Scott’s computer became the hub for the police’s evidence of what happened. The cops knew they would have to account for their actions. Members from the different units who had recorded video and photographs of the events went to Scott who loaded the evidence on his computer.

He appeared at the Commission last week and faced a choice – expose an attempt to hide and manipulate evidence or take the rap and possibly face criminal charges. A few days after the shootings, the files were transferred off Scott’s computer to a South African Police Services (SAPS) hard drive, which would form the evidence offered by the police, all of which they had to hand over in the interests of finding the truth.

Scott was put in a corner at the Commission last week when evidence leader advocate Matthew Chaskalson proved that the police had not provided all their material, deleting some, and had misrepresented what they had to support their own view of who was to blame. To his knowledge, said Scott, he was not responsible for deleting any evidence. He was committed to handing over everything, he said.

Looking at the files, however, it was clear that important information had consciously been removed and not presented to the Commission. What’s worse, it seemed that the missing evidence could have helped piece together what happened.Scott maintained that after he transferred all the information to the SAPS hard drives, he had a limited part in controlling and preparing evidence for the Commission. But things weren’t looking good for the lieutenant colonel. He was the first to manage the evidence and last year he gave the SAPS a presentation of what had happened. Both presentation and management of the evidence has been shown to be seriously flawed. To prove his innocence, last week Scott handed over the SAPS hard drive on Marikana. The evidence is being studied and is likely to reveal how far the police may have gone to protect themselves from prosecution.

The first analysis has revealed that a critical piece of evidence was hidden: a video.

The video was shot outside the Marikana joint operations command centre at 10:15 on 18 August 2012, two days after the massacre. Brigadier Adriaan Calitz is briefing troops. The Commission has previously heard audio of Calitz, one of the commanders on the ground, instructing police to “get out there and engage”.

In the video, Calitz ensures there is no media present before saying Julius Malema is coming to Marikana and will instruct the miners to return to the koppie where they may provoke police to put an example of SAPS violence on display for media. He instructs officers to collect the barbed wire that was deployed on 16 August and encircle the entire koppie with it. Calitz notes morale is high and thanks the group. He says he gave the President the same presentation of events he gave the media.

“Then [Zuma] announced that there will be a board of inquiry. Now some of you might wonder what is now going to happen. Remember, after any big action there’s now a board of inquiry that will sit and then take it frame-by-frame, minute-by-minute, of what happened. All right? The police we will give our 100% full cooperation,” Calitz tells a large number of SAPS members.

He describes the “tactical retreat” on 16 August. “We did the water canons, we did the stun grenades, we did the tear smoke. We did the pushback. We tried. When it was ineffective the guys ran back,” says Calitz. “So on that, nothing, nothing, nothing was wrong. Ok, you acted, it was justified, and that is exactly the commitment and the cooperation we are going to give the people.”

Calitz stops his speech when he sees a member of the media filming. He asks the officer next to him, “Mac”, to check the footage and have it recorded over.

He then briefs the cops on the forms they have to fill out about the events on 16 August. “It’s useless that we say I only fired two shots but there was 500 or 400 cartridges picked up. You understand what I’m saying? You got nothing to hide. Please do not, why? All our firearms, if you were there on the scene on Thursday, your firearms will be taken and will be collected.”

The SAPS had offered another video shot around the same time, without the briefing from Calitz. Chaskalson noted how the police somehow thought that footage was important to submit, but not Calitz’s briefing.

“That’s one inference,” responded Marikana Commission chairman Ian Farlam, “There is another inference that it was thought that it was sufficiently embarrassing not to circulate it to the parties.”

Calitz’s comments that the plan was executed “110%” could suggest that commanders on the ground gave shoot-to-kill orders. This could, perhaps, exonerate the top commanders, as such orders would likely have come from the ground. When questioned, he will likely respond he was simply trying to boost police morale in the face of an inquiry. But his comments are also in direct conflict with what police commissioner Riah Phiyega told the Commission. “There was a plan … The plan was disrupted,” she said in April.

The video also suggests there is a culture in the SAPS of lying about evidence. Calitz repeatedly reiterates that the police should not lie. But why would he assume that they might lie?

Photo: Police presented this series of videos as evidence to the Commission. The circled videos were found to be out of chronological order, appearing as if someone wanted to present a certain argument and labeled the videos to fit.

Photo: The series of videos the police submitted included some files (included in the yellow box) from this camera’s folder.

Photo: It also included files from this folder (included in the yellow box). Together the two series look like one complete series. But in compiling the videos, the Calitz video, file 00021 from the 407 directory, is excluded.

Those inferences will be investigated as the commission resumes today and when other SAPS leaders are cross-examined.

What is clear, however, is evidence of a cover-up. The police spent over a week in Potchefstroom before the Commission preparing their testimonies and evidence. It appears they also prepared to lie to the Commission by hiding evidence. In addition to the hidden Calitz video, sources say evidence will emerge in that in Potchefstroom the SAPS also invented minutes of meetings for the 15, 16 and 17 August and doctored the police occurrence book.

The video was only found because Scott offered the hard drive to be analysed; otherwise it would have been hidden in a convoluted maze.

The evidence leaders knew what they were looking for: they had asked for police video files 0 to 41 in a series to add to what they already had.

When the new videos were provided, there were a number of concerns that kept them digging. The file names of the videos in that series were all slightly different. In fact, it was not a proper set of sequential files. Some of the videos had been shown before and resurfaced with different names. When the lawyers looked closely, the videos were not in chronological order, despite appearing to be.

The requested police video series was actually a compilation taken from multiple directories, renamed and made to look like a complete package. As police selected the different videos to present in the one package, the Calitz video was excluded. Another file took its name, meaning suspicions would not be aroused as to the missing video. Scott was under pressure to prove he was not involved in evidence tampering and continues to profess his innocence. The questions that now need to be asked, said Chaskalson, are who put together the evidence directory following Marikana and who gave the evidence to the Commission?

Why? Because that person has the key to the cover-up. After months of being tied down in denials and obfuscations, the Commission has finally made some progress towards finding out what really happened on 16 August last year. Scott did not want to take the rap for his superiors and has knocked out a brick in the SAPS defence, exposing an unsteady wall of deceit. DM

Photo: Policemen give instructions to an injured miner (bottom R) after the striking miners were shot outside Marikana, August 16, 2012. REUTERS/Siphiwe Sibeko