Burn it up: a Zamdela community radio station feels the political heat 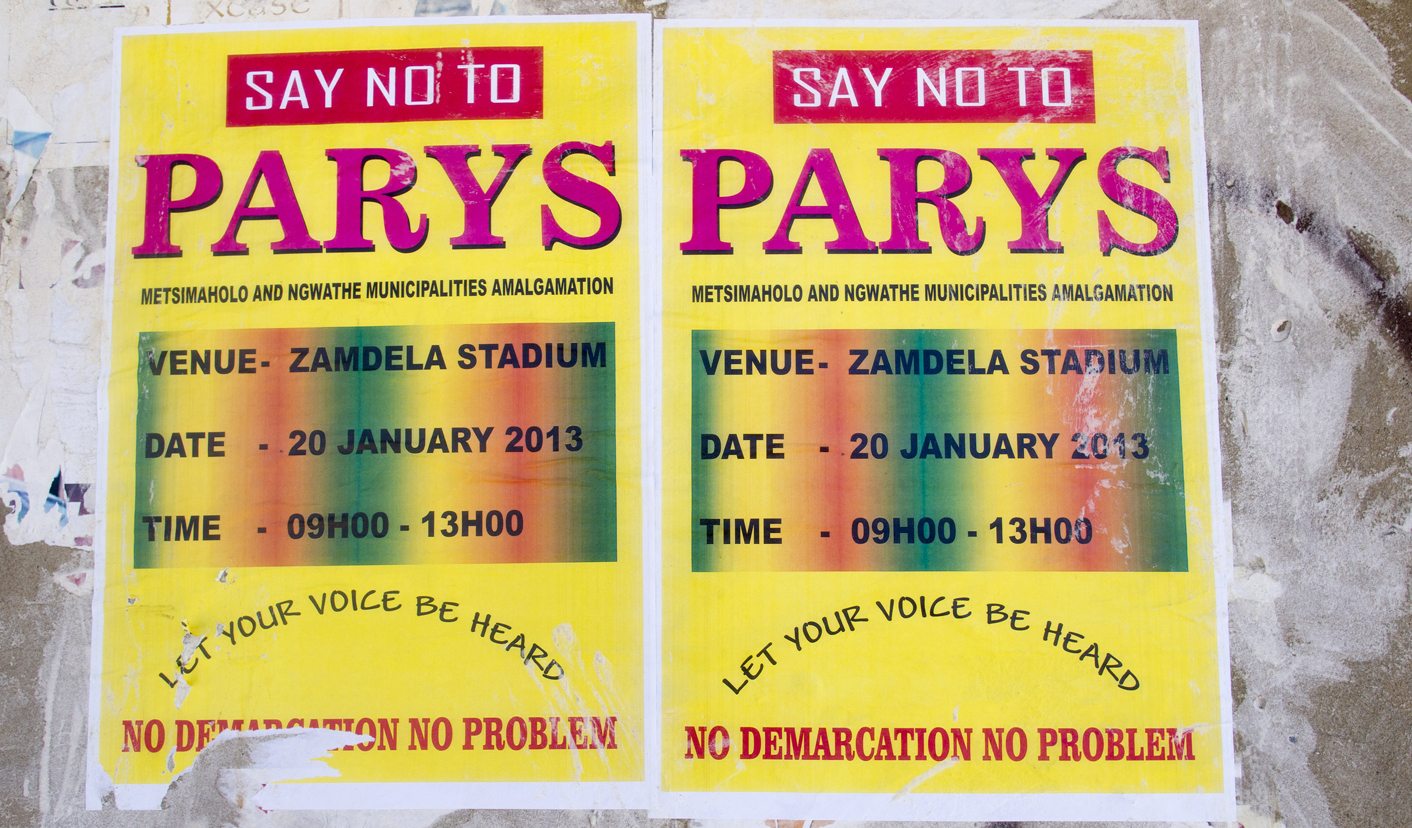 An arson attack on a community radio station in Zamdela township has exposed the lingering conflict in the wake of the Municipal Demarcations Board’s abandonment of plans to merge two Free State municipalities. By KHADIJA PATEL.

Last weekend two masked gunmen forced their way into Karabo FM, a community radio station based in Sasolburg’s Zamdela township, forcing staff out of the building before dousing it with petrol and setting it alight.

Karabo FM, which broadcasts to an estimated audience of 73,000 listeners (according to the August 2013 RAMS survey), serves a vital purpose in the area that has been wracked by violent conflict over plans to merge Parys (a low-income area) into the municipality that governs Sasolburg, a more prosperous industrial area.

In January this year, four people were killed, several more injured and hundreds arrested during explosive protests against the proposed merger. Cars were set alight and government buildings damaged. All because local government failed to consult the Zamdela community to its satisfaction over the merger.

Residents who felt cut off from structures governing their lives took the streets in frustration. The failure of the public participation process in Zamdela was not trivial. If we define democracy as the active participation of people, as citizens, in politics and civil life, then the violence in Zamdela demonstrates a failure of democracy in the country where it is also mirrored elsewhere.

Crucially, community media, like Karabo FM, serve a vital purpose in these settings. In freeing itself to act as a platform for public opinion, Karabo FM became, in these circumstances, a conduit for the promotion of democracy.

“With several outbreaks of violence over the past months, Karabo FM has remained a medium that sought to maintain some independence,” the FXI said in a statement.

Long after the focus of national media had shifted to the next violent uprising elsewhere, Karabo FM continued to bear the brunt of remaining tensions in the Zamdela community.

In January, the station was accused of stoking the violence by airing the views and opinions of the protesters.

A blog, signed by “Voice of Reason Hard Nut To Crack” (someone the Daily Maverick has ascertained is a board member of the station writing under a pseudonym) and posted on the radio station’s website suggested “a blame game from those in power”.

“Karabo FM is what I call a scapegoat in all this. This child who when the going gets tough, the poor soul gets the blame…in our Sotho idiom…we say…ke mmutla kotlwa tsebe!” he writes.

The blog continues that Karabo FM had played a significant role in facilitating communication between leaders and members of the community and because of the station “leaders got to know exactly what community members, or some of them, think and plan about them.”

The writer decries allegations that the radio station had facilitated the violent protests and charges that “only weak leadership” would sanction “poor institutions like Karabo FM”.

“Karabo FM doesn’t get any funds from government nor municipality. Since its inception, it has been scraping to survive, and with that position, negative publicity from the powers that be is just rubbing salt to the wound.”

Lucky Malebo, a representative of Metsimaholo Concerned Residents, explains that Karabo FM became embroiled in a war of words with the SABC’s Lesedi FM after the protests in January.

He claims Lesedi’s geographical proximity to provincial government in Bloemfontein was used to further the official position on the proposed merger.

“We know that it was the provincial government who wanted this merger and now that it was rejected, rejection did not sit well with them,” Malebo says.

He refutes allegations that Karabo FM stoked the violence and argues that the community station gave residents a space to engage on the proposed merger, a space that was not afforded by other media.

“Lesedi did not have the decency to get our side of the story,” he said.

He says one Lesedi FM announcer even badmouthed the professional expertise of his Karabo FM counterparts.

Free State premier, Ace Maghashule, was quick to condemn the attack on the radio station this week. In 2011, Maghashule invested in the community radio station as part of his efforts to broaden the scope of local media to include positive stories about his government.

It was a move City Press described as “expanding his media empire”.

Dika Theswa, Karabo FM station manager, described the contribution made by Maghashule as a “once-off donation” which was also made to other community radio stations in the province.

“Our revenue is sourced entirely through advertising,” he said.

In August, the Municipal Demarcation Board decided to drop plans for a merger between the Metsimaholo and Ngwathe municipalities in the Free State, and so the timing of the arson attack on Karabo FM has baffled staff.

“Everything had gone back to normal until this [arson] happened,” he said.

Both Theswa and Malebo refuse to view the attack on the radio station in the context of the outbreak of violence in Zamdela earlier this year.

They caution that speculation that would suggest the arson attack took place in the context of the rift that has developed between sections of the community and the local and provincial government might be over-zealous.

Malebo notes that while “a lot of conspiracy theories” are currently circulating through Zamdela, residents have been urged to rein in speculation until police complete their investigation. DM

Note: Efforts to reach the management of Lesedi FM for comment were not successful on Wednesday evening.

Photo: The residents of Zamdela township rioted for three days in January to protest the the attempted demarcation of Sasolburg – a reasonably prosperous area due to Sasol and associated industries – into the municipality related to impoverished Parys. The residents blamed Free State premier Ace Magashule for it, as he comes from Parys area. (Greg Marinovich/Storytaxi.com) Zamdela, Sasolburg, Free State.