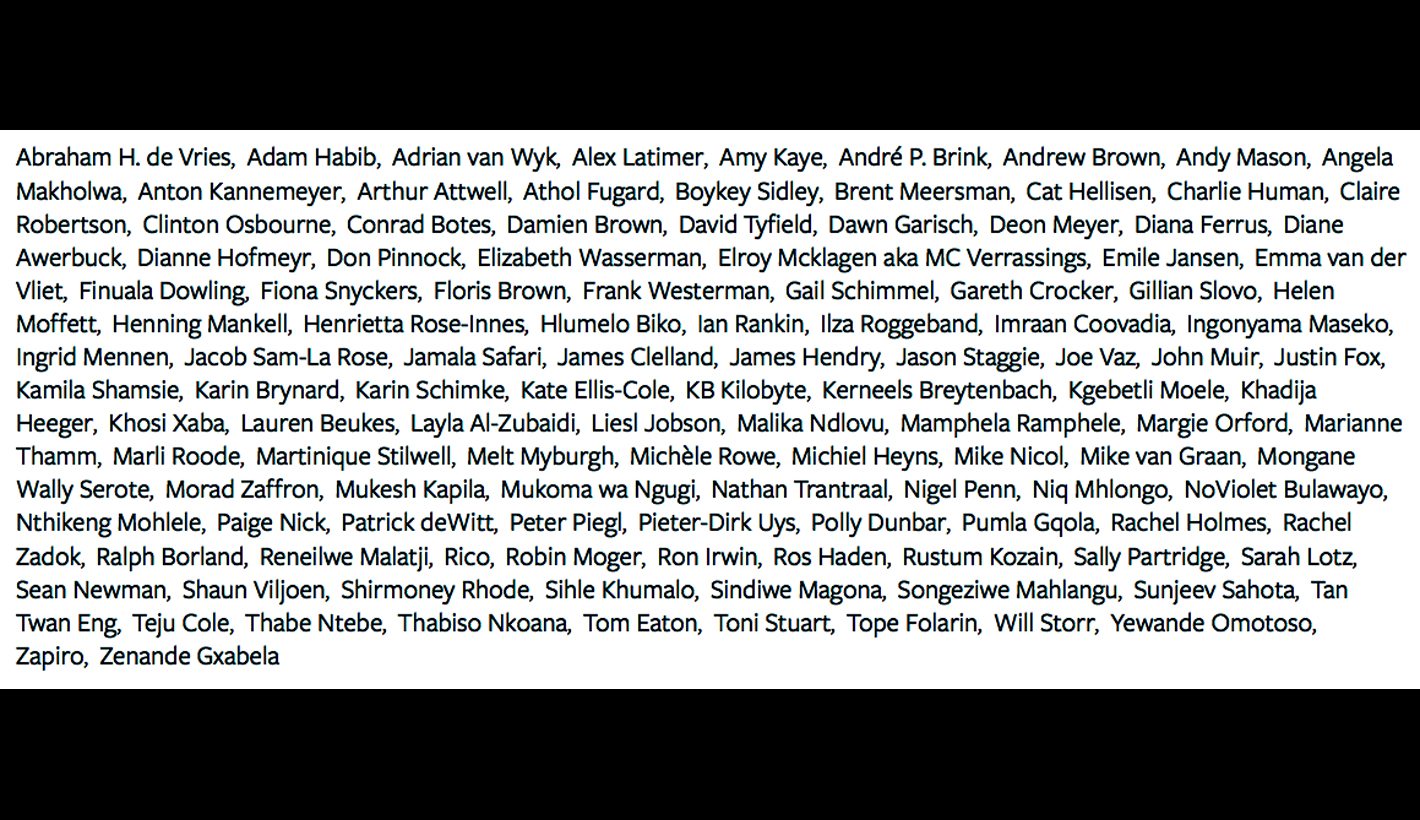 Last year we said that Cape Town’s Open Book Festival, though only in its second year of existence, was establishing itself as South Africa’s pre-eminent literary festival. This year’s incarnation of the festival has supported that assertion. The ambitious five-day programme threw up some gems that you’re unlikely to match elsewhere in South Africa’s literary world again this year. By REBECCA DAVIS.

“Those are some pretty outstanding people on that stage,” the man sitting next to me murmured just before the start of an author’s panel at this year’s Open Book Festival. He wasn’t wrong. About to address the audience were NoViolet Bulawayo, who had found out the day before that she was the first black African woman to be shortlisted for the Booker Prize; Tope Folarin, this year’s winner of the prestigious Caine Prize; celebrated Nigerian writer and Twitter provocateur Teju Cole; and Kenyan poet and author Mukoma wa Ngugi (son of Ngugi wa Thiong’o). In terms of an inter-continental literary relay team, we could do worse.

One of the highlights of this year’s Open Book was the number of talented writers from across the continent director Mervyn Sloman’s team was able to draw together. Another highlight was their enthusiastic reception; the panel mentioned above took place at 2pm on a Wednesday afternoon, surely an unpromising time-slot, and was completely sold out.

Open Book is increasingly able to rope in some fierce international talent. Probably the biggest names on the programme – in terms of sales at least – at this year’s festival were crime writers Ian Rankin and Henning Mankell, but the latter had to withdraw from the festival at short notice due to injury. (This is, as Book SA editor Ben Williams pointed out during one event, the curse of the South African literary festival. This year Franschhoek also lost one of its biggest drawcards, author Anthony Horowitz, at short notice due to illness.)

But arguably the hit of the festival was not Rankin but Teju Cole, who was pressed into service on numerous panels, a number of which sold out. Cole had arrived in Cape Town last week after making headlines for a sequence of satirical tweets imagining a scenerio in which the US was considering bombing England after learning that a British firm was given permission to sell chemical weapons to Syria, as indeed happened. Cole is a thoroughly “modern” writer in his leveraging of social media: his relevant, often savagely funny current affairs observations on Twitter have made him something of a celebrity beyond his two books (most recently Open City, 2012).

His Twitter account isn’t false advertising. Cole’s sharp intelligence, wit and charisma fortunately extend into real life, festival organisers must have been relieved to note. While at Open Book he continued to tweet sharp notes about Cape Town: “What I thought at Robben Island? That in a half century people will visit Guantanamo Bay and think, ‘How could humans do this?’” and “Eight press interviews in Cape Town so far. All my interviewers have been great. But every single one has been white. Absurd.”

The awkward fact of Cape Town’s ongoing social inequalities was also raised by author Mukoma wa Ngugi, who told the story on one panel of being invited to a party at a Cape Town restaurant while attending the festival, and being the only black person in the place. Open Book also provided for some of these concerns to be put to Premier Helen Zille, albeit in an indirect fashion. Zille participated in a “Writersports” game on Sunday evening which saw five local authors write speeches for her in the style of genres suggested by the audience, which meant, for instance, that Hayibo-founder Tom Eaton ended up writing Zille “Advice to give a child who’s dating a politician” in the style of JM Coetzee. (Uncanny.)

Though everyone behaved decorously throughout the event, Taxi Poetry author Imraan Coovadia took advantage of the platform to send some sly digs about refugees, education and tweeting Zille’s way. “Seriously, a Premier who tweets?” Coovadia asked, in mock bemusement. “I don’t even have time to do that, and I do nothing.”

Zille took it all in good humour, as indeed she should’ve, since the event offered a great PR opportunity for her to show a more human side than usual, coaxed by the skilful questioning of MC Marianne Thamm. Thamm managed to get Zille to spill some beans on Angela Merkel – “fun, down-to-earth, unpretentious”; Bill Clinton – “I’m twice the age he likes”; and the response Zille gets when she phones people to fix municipal issues: “They often think I’m joking. They think it’s Schuster.”

The previous evening had seen another crop of local authors and Brit Will Storr write comic short stories live on stage while Ben Williams grilled festival director Sloman. It’s ideas like “Writersports” which are putting Open Book ahead of the lit-fest game in South Africa; a willingness to try different things every year and not stick to the staid, stuffy, three-authors-behind-a-table formula. This year, for the first time, the festival introduced mobile events: walking tours undertaken with various authors to simultaneously explore novels and bits of Cape Town’s history.

The sense of innovation also extended to the sheer range of topics covered in discussion and personalities present. Where else do you find one of the country’s top judges (Dennis Davis) sharing a panel with a convicted criminal (Glenn Agliotti)? Indeed, this very question was put to Davis by an audience member in a less than complimentary way, with Davis later claiming that he hadn’t previously been aware that Agliotti would be part of the panel discussing Glenn Agliotti: A Biography.

There are those who may argue that the festival sacrifices “serious” literary interpretation for populism, and they’d be right. But in a country that reads “scarily little”, as Shining Girls author Lauren Beukes observed on one panel, what alternative do the organisers have? And indeed, there is every indication that they are going about things the right way. While a general atmosphere of relaxed good humour – even fun– hangs over the festival, Q&A sessions after the panel discussions tended to be robust and interesting, sometimes outstripping the content offered by the panel discussion itself.

Open Book draws a wider range of higher profile writers than the likes of the M&G Literary Festival, and avoids the old-white-person atmosphere that hangs over Franschhoek. It is, at the moment, the biggest treat on South Africa’s literary calendar. DM