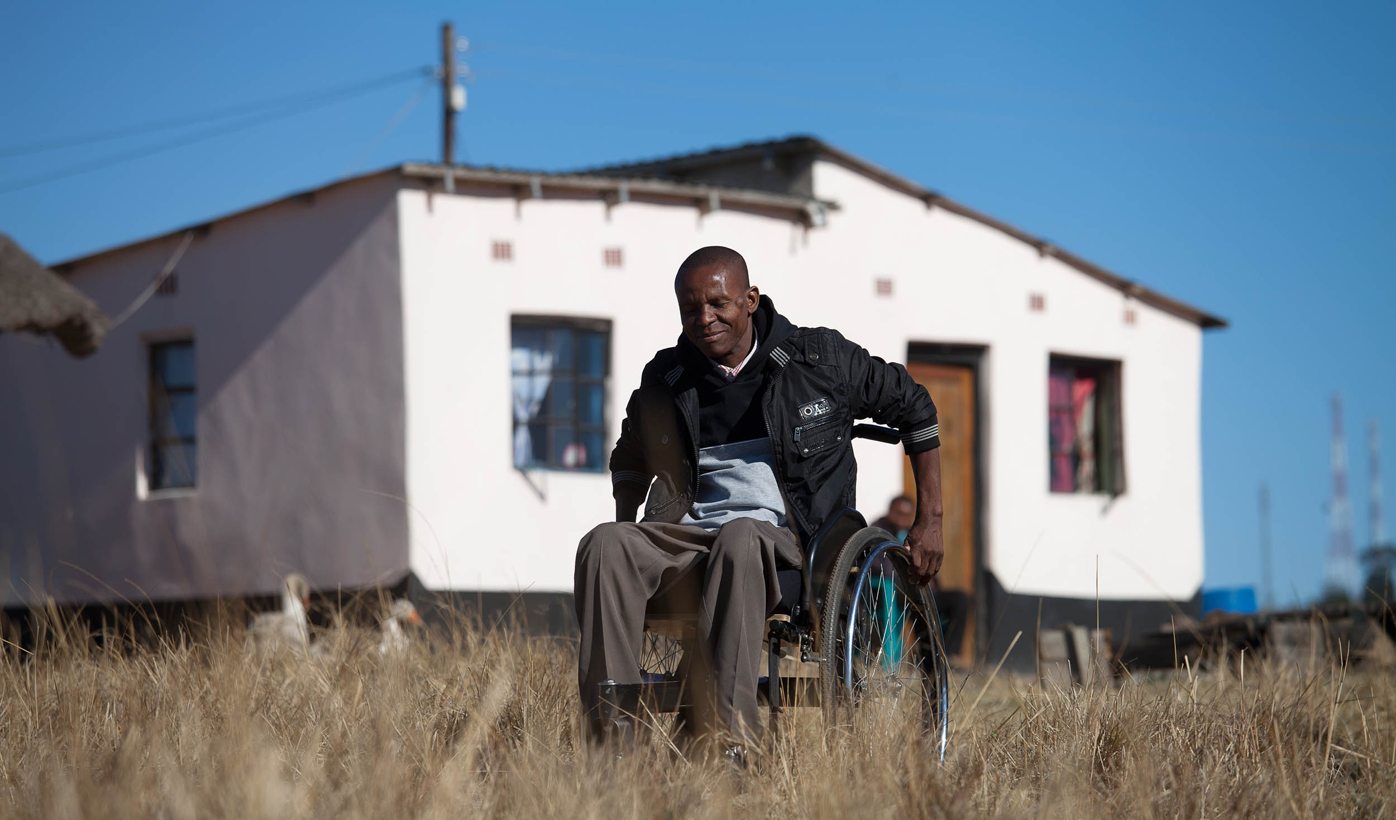 Usana olungakhali lufela embelekweni – ‘a child who does not cry won’t get help’. The Eastern Cape’s health system has collapsed. It is riddled with corruption. There is no electricity or water, no drugs, too few doctors and nurses, no chance of an ambulance arriving, no dignity and no care. This week a civil society coalition released a damning report that hopes to draw attention to the problems and sew the seeds of a turnaround. The effects of the crisis are harrowing. By GREG NICOLSON.

The report focuses on the pain and indignity of the province’s long-standing health crisis and was launched by the Eastern Cape Crisis Action Coalition (Eccac), a group of 14 organisations, including Section27, the Treatment Action Campaign (TAC), the Rural Health Advocacy Project, the Democratic Nursing Organisation South Africa (Denosa) and the South African Medical Association. Its 28 pages include testimonies from healthcare workers, community members, researchers and ex-officials and it makes for distressing reading.

“Those affidavits are horrendous. They bring tears to your eyes and they make you wonder what can be done to resolve the problem,” said former Constitutional Court Justice Zak Yacoob, a board member of Section27, who felt it necessary to attend a press conference for the first time in 25 years.

Lindeka Gxala, 33, was seven months pregnant when she lost her child. She made the 10-kilometre trek to Pilani Clinic six times but saw a nurse only twice. Eventually she went to Nelson Mandela Academic Hospital in Mthatha where she learned her unborn child was dead and would need to be removed.

Photo: Lindeka Gxala is one of many who suffer from the Eastern Cape’s health crisis. Picture Thys Dullaart/Section27

“The nurses at Pilani are kind and well-regarded in the community. I can even call one of them on the phone if I have a serious problem, but they are simply too busy to attend to all the patients,” Gxala is quoted in the report.

“The doctor assured me that there would be no pain when they removed her from me, and I was admitted and placed in a ward the following day,” adds Gxala.

She had to share a bed with a patient in labour. “She was bleeding. The nurses told her to be still, but when the pain came she would thrash and the blood would spill onto the floor. She bled heavily and her blood pooled on the floor.”

There is a systemic failure in the Eastern Cape. Improvements and pockets of excellence exist, but Eccac speakers say a crisis prevails, with most areas showing no improvements since 1994 and some getting worse.

A recent study shows just over 50% of babies at the age of three months have had their immunisations. The new report, titled “Death and Dying in the Eastern Cape”, features anecdotes of medical facilities with no water or electricity, stock-outs of supplies, medical practitioners who can’t cope with too few staff and too many patients as well as infrastructure in a state of disrepair.

But he has limited influence on the provincial department. Health MEC, Sicelo Gqobana, is in charge. He was described as irresponsive to concerns, having shown no sign he would acknowledge the crisis or work with civil society.

A Special Investigative Unit found that in 18 months over 2009 and 2010, R800-million was looted from the provincial department. Addressing the problems requires more money, but the Eastern Cape Health Department won’t get it because it has continually been found to be wasteful and corrupt.

Gxala’s story continues: “The nurses gave me two more tablets. I became very thirsty and stood up to search for water. I went to the sink and it was full of vomit, I could not drink from it. The vomit blocked the sink and it could not drain. They brought me dinner, mincemeat and bread or rice, but I could not eat it because the place was filthy. There was blood all around me and people vomiting and the room was filled with the stench of blood and the vomit.”

That night, a friend had to bring two blankets, as the hospital would not provide them.

From within the system, citizens and health professionals spoke out in the report (Eccac says it has many more testimonies), but whistleblowers risk victimisation.

Photo: The nurse’s showers at Canzibe hospital are in a poor state. Picture Section27.

Every member of Wednesday’s panel wanted to speak on the topic of how difficult it is for health professionals to speak out. They said that the threat may not come in the form of an attack or dismissal from work, but that life can be made difficult, a job a misery.

The health professionals who confessed they weren’t able to offer their patients the services they needed said they were committed to their jobs and their patients and wanted to see improvements.

“It was deep, sharp pain. I felt something come out of me. I stood up and searched in the darkness for a nurse. The nurses ordered me to walk around. I tried to tell them that something was coming out of me. They told me to walk around more. I kept telling them about the pain. By then my dead child had come out feet first and the head was stuck inside me. The baby hung from me as I walked around the ward and tried to plead with the nurses, to beg them for relief from the pain,” said Gxala.

Heywood added that the minister had been enraged but also concerned that people would become so angry that doctors would be vulnerable to attack.

The minister has reportedly already sent a task team to check on some of the problems and had met with one of the doctors mentioned in the report over the weekend.

Sizwe Kupelo, spokesperson for the MEC, noted the concerns and told the Daily Maverick: “(The) national minister will respond in due course, however, all issues are receiving attention. It is interesting that the coalition has failed to acknowledge this. The MEC has never tried to run away from this group. We have an open door policy and open to anyone wishing to discuss health matters.”

Five pages of the report were left blank, redacted after Motsoaledi’s concerns. The doctor he spoke to felt his voice was heard in the meeting. The Eccac groups respect Motsoaledi as he met the organisations and took action almost immediately while the MEC has only set a meeting for 16 September (which, granted, is a coup considering the anecdotes surrounding him).

After debate, Motsoaledi’s counsel prevailed and the story of the one-year-old baby Ikho, who died after multiple failures of the provincial health system, was withdrawn from the report although his story has already been reported elsewhere.

“I was still walking around when I collapsed from the pain. The nurses then removed another patient from her bed and put me in the bed. I stayed there until six in the morning without anyone helping me. I was in terrible pain the whole time,” Gxala continues, describing her ordeal.

The ailing system cannot change immediately, nor rely on one person or organisation. Eccac is staging a march to Bisho on Friday. Within two weeks, they want the department to start working on the key crisis points that deny communities their rights.

Then they want a coordinated plan from the provincial and state health departments, with input from the security cluster on issues relating to corruption. They would prefer to avoid going to court, but it remains an option.

Eccac wants to build public support around its campaign to finally fix the province’s health system. “We want to make a statement and if you were to ask people if there has been an improvement in terms of the healthcare services in the Eastern Cape I’m sure it would be a very rare statement that says, ‘Yes, there has been an improvement in the overall’. That is why we really took something that would touch people’s hearts,” said Gwagwa, who is concerned her union’s members are taking the flak for a failing system.

Gxala’s torment is heart-wrenching. An overburdened clinic meant she didn’t have proper prenatal care. She lost her baby, which would have been her first child, without dignity or care. The organisations hope stories like this will finally push people into action.

Gxala finishes: “The nurses looked at my hospital card and commented that they had failed to give me an injectable anaesthetic for pain. I still do not know whether they had forgotten, or did not have the injection. Without giving me painkillers they then removed the dead baby while I was conscious. The pain was terrible. They eventually gave me something for the pain, but I had felt everything. I cried the whole time.” DM

Main photo: For Lungile Maraqa, 37, simply getting to the Wilo clinic can be a problem. Picture Thys Dullaart/Section27