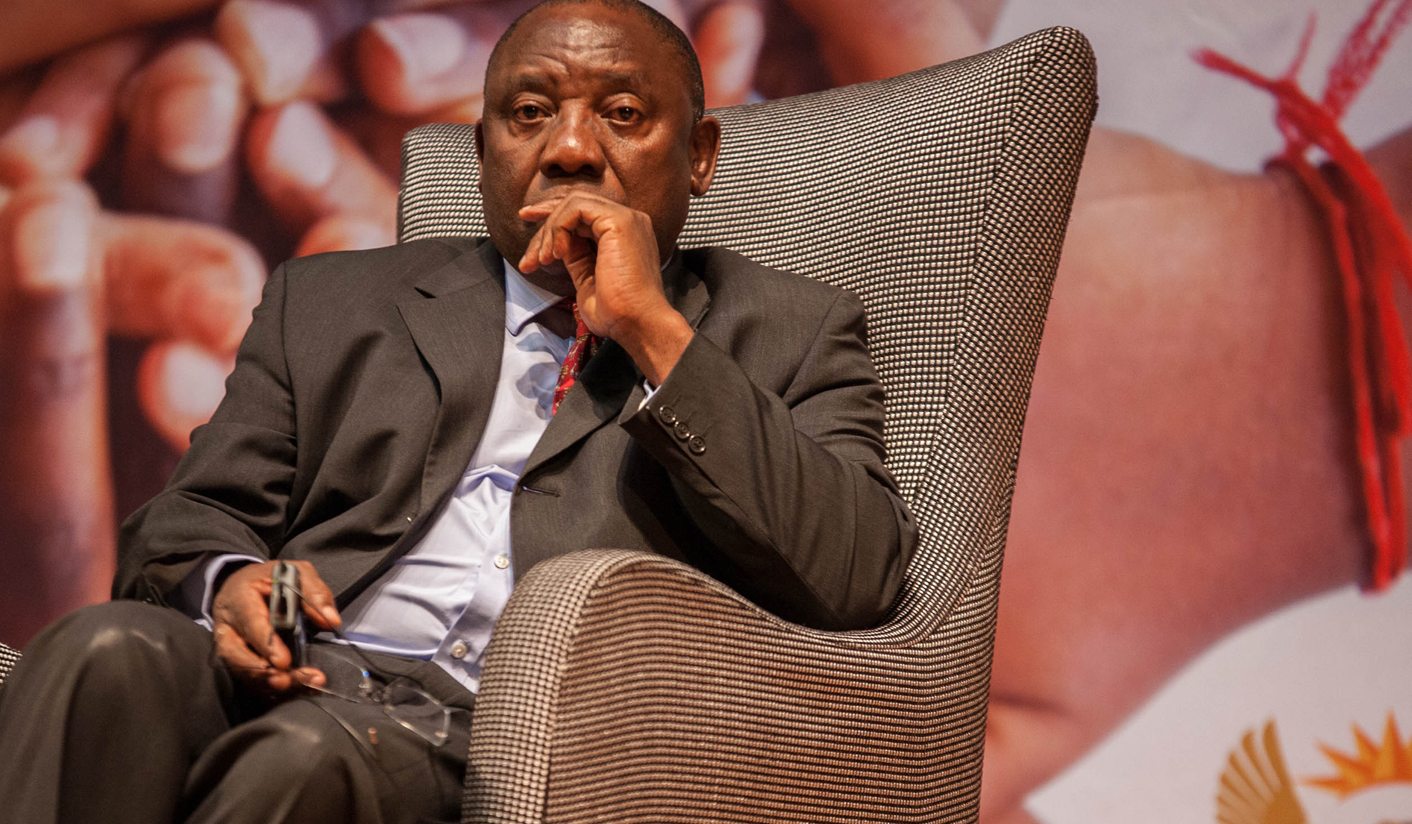 In two weeks, supporters of the Marikana Support Campaign have disrupted two events with senior ANC leaders at the University of Witswatersrand. Last month it was Trevor Manuel. On Monday night, it was his National Planning Commission colleague, ANC Deputy President Cyril Ramaphosa. He was there to sell the National Development’s Plan’s vision for the economy. Instead, the crowd was reminded of the ongoing outrage over last year’s massacre and Ramaphosa’s Lonmin links. By GREG NICOLSON & THAPELO LEKGOWA.

Last October, Ramaphosa was the fallen hero. The man who many thought could be the ANC’s white knight seemed to have lost his credibility when it was revealed at the Marikana Inquiry that he sent an email to Lonmin, of which he was a board member, labelling the strikers “criminals” and calling for a “concomitant” response. The email came a day before the shootings. It is alleged he urged Police Minister Nathi Mthethwa to come down hard on the situation.

When Ramaphosa won the ANC’s deputy president position, all that seemed forgotten. Since, he has been out campaigning for the party ahead of the 2014 election and pushing the National Development Plan (NDP) to reassure voters and investors the ANC-led state has a vision for the future. On Monday, he was reminded, however, that he still has to testify at the Marikana Inquiry and at least those affected by last year’s shooting have not forgotten his role in the matter.

He worked hard to keep the event on track. Ramaphosa used his speech and most of the question time to focus on the NDP. He emphasised the progress South Africa’s economy has made since 1994 and acknowledged the ills of unemployment, inequality and poverty. He emphasised the NDP as the vehicle the country needs to tackle these challenges and argued business must understand that it needs to help reduce youth unemployment while unions should not fear losing their rights under the plan. The NDP needs to be “dynamic”, he said, in a speech that tried to accommodate differing interests and downplay division over the plan.

On jobs, he said, “The strategy outlined in the NDP is threefold. In addition to boosting our educational levels, we have to promote industries that are labour absorbing, such as mining, agriculture, construction, hospitality and small businesses. Secondly, we also have to grow the more advanced sectors of the economy, such as manufacturing, parts of financial services, telecommunications and businesses services. Thirdly, more effective provision of a broader social wage should enable even the poorest of people to have a decent standard of living, to build the capabilities to get better jobs, higher incomes and a broader range of benefits.”

At some point the speech was, however, interrupted. “I want to pause and ask those who are shaking the papers to be respectful to other people who do not have paper in their hands,” he said, stopping his speech – in a rebuke aimed at about 40 supporters of the Marikana Support Campaign. These included injured mineworkers, who were shaking posters that read, “Don’t let the politicians get away with murder.”

Photo: “Don’t let the politicians get away with murder” reads the sign of an activist who leaves the event during Ramaphosa’s speech, his poster in his mouth.

The group was demonstrating outside of the Wits Great Hall before the event. They were allowed to attend on the proviso that they would stay quiet. As a reward, they got to ask the first questions to Ramaphosa.

Before the event ended, a woman held her poster in front of the stage and repeated, “How do you sleep at night? You have blood on your hands!” She was escorted out by security.

When Ramaphosa said workers could now strike legally instead of being bussed away from industrial action, an audience member heckled, “They now get shot instead.”

Photo: George Bizos, who represents a family of a killed mineworker at the Marikana Commission, waits for the event to begin.

Responding to a question from the crowd, Ramaphosa said there was widespread sympathy for the community “who continue to suffer as a result of Marikana, which is deeply regretted”. On funding for the legal team of the injured and arrested mineworkers at the inquiry, he said it’s a matter for government and a solution may still be found. He was unwilling to elaborate on Marikana issues, saying the story hasn’t yet been fully told and there are forums for such.

Ramaphosa seemed unfazed by the criticism, but the demonstrators managed to get Marikana on the news agenda, with most local media outlets and some international journalists present.

Before Monday’s event, Ramaphosa seemed to have miraculously shed his Marikana baggage. Now, it seems once again to weigh him down as the ANC builds to the 2014 elections, Ramaphosa tries to find his groove within the party, and he awaits his appearance at the commission of inquiry. DM

Main photo: ANC Deputy President Cyril Ramaphosa listens as a member of the Marikana Support Committee criticises him and the ANC. (Greg Nicolson)