Analysis: Ruto and Kenyatta are still one step ahead of the ICC 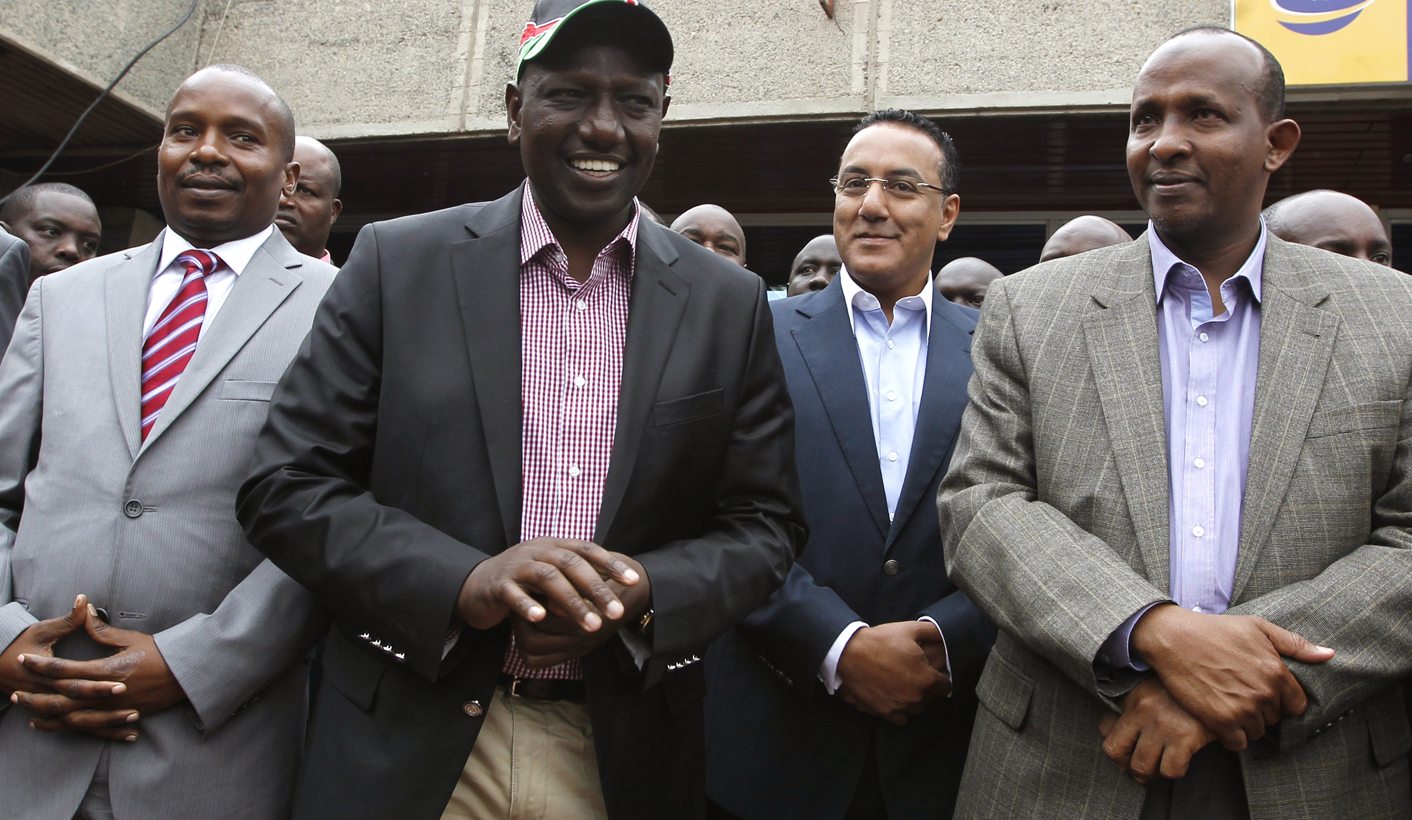 When Kenyan deputy president William Ruto appears in the dock in The Hague on Tuesday it will be a seminal moment for international justice. Yet Kenya’s outrageous, if unsurprising, decision to withdraw from the International Criminal Court means that only two outcomes are now possible, and neither involve Ruto or his boss, Uhuru Kenyatta, serving any jail time. By SIMON ALLISON.

Let’s not allow the propaganda and the politicking to detract from this moment, which is surely the most significant in the short history of the International Criminal Court (ICC). Appearing in person on Tuesday morning in The Hague is the sitting deputy president of a sovereign nation, and he is being made to answer for the heinous crimes of which he stands accused. This has never happened before.

It is all the more momentous because the appearance of William Ruto will, in short order, be eclipsed by that of Uhuru Kenyatta, Ruto’s boss and Kenya’s president. Kenyatta’s trial, on separate but related charges, begins in November. Both have been charged in connection with their role in the post-election violence that whipped through Kenya in 2007/2008, leaving over a thousand dead and tens of thousands more displaced.

There is no precedent for trying both the head of state of a constitutional democracy and his deputy, in another country, for crimes committed while they were both in government (although neither occupied quite the lofty positions they do now – proof, if more was needed, that fortune favours the brazen). It’s like Barack Obama and Joe Biden being hauled before judges to explain away Guantanamo Bay, drone strikes and their wholesale evisceration of the world’s right to privacy; or Thabo Mbeki and Jacob Zuma, on their ascension to South Africa’s top jobs in 1999, being forced to account for the arms deal in front of an international tribunal.

Just to get Ruto and Kenyatta (and the always-forgotten former broadcaster Joshua Arap Sang, who is being tried alongside Ruto) into this position is a major victory for the ICC. The lawyers and staff at the court should savour the moment. Finally, the court has begun to live up to its mandate of holding the powerful accountable for humanity’s very worst excesses.

For this extraordinary, precedent-setting bit of legal history, the ICC has the good citizens of the Republic of Kenya to thank. It was they who elected Ruto and Kenyatta to the highest office in the land, despite – or perhaps even because of – the international charges against them. In most countries, implication in crimes against humanity would be enough to derail any presidential bid; in Kenya, it was an asset as UhuRuto pooled their notoriety and played the victim card to devastating effect.

Yet the ICC’s apparent triumph comes with a few caveats. Big ones.

First up is the court’s continuing legitimacy problems, which have been compounded by the Kenyan situation. A central part of Kenyatta and Ruto’s defence has been conducted outside of the courtroom in the court of public opinion, specifically, public opinion in Kenya and Africa. This has chipped away at the court’s most obvious weak point: that it only investigates and tries black, African men. This is not strictly true, and nor is it completely the court’s fault. As we’ve explained before, the court has its hands tied by a complicated referral process that means only crimes in the very weakest or unpopular states can be investigated. All too often these states are African, giving the court a crippling perception problem.

The African Union has jumped on this bandwagon, accusing the court of racism and asking African countries to reconsider their membership to the court. “African leaders have come to a consensus that the (ICC) process that has been conducted in Africa has a flaw,” said Ethiopian prime minister Hailemariam Desalegn after the last AU summit in Addis Ababa. “The intention was to avoid any kind of impunity … but now the process has degenerated to some kind of race hunting.”

Secondly, Kenya has given the ICC a whole new set of headaches by formally withdrawing its membership. This happened at a special parliament session on Thursday last week, with the motion led and approved by Kenyatta and Ruto’s governing Jubilee coalition. “I am setting the stage to redeem the image of the Republic of Kenya,” said Jubilee’s parliamentary leader Aden Duale. The trials of Kenyatta, Ruto and Sang will continue – the legal process of disengaging from the ICC takes about a year, and does not technically affect cases that were brought before then.

Kenya’s cooperation with the court, already minimal, now looks set to stop completely. This will undoubtedly have an impact on prosecutors’ ability to try the case effectively. Worse, because the withdrawal has been framed as a necessary consequence of the court’s illegitimacy and its supposed victimisation of Ruto and Kenyatta, it lays the legislative framework for Kenya to ignore a guilty verdict if one eventually comes. As Nairobi’s The Star concluded in an editorial: “It cannot fail to reinforce the narrative put out by the political opponents of the president and his deputy that they made their historic run for the top seats, not in order to work for the nation, but as a defence against the charges they would one day have to face at The Hague.”

The third and final caveat is that the prosecution itself isn’t going that well. This, perhaps, is why Kenyatta and Ruto have appeared so content to let the trial take its course. They believe they will be found not guilty, and therefore vindicated. The prosecution has made a number of mistakes, and have already earned a vicious tongue-lashing from Christine van den Wyngaert, one of the presiding judges (who has subsequently excused herself from the case, citing workload).

Van den Wyngaert did not pull her punches: “… there are serious questions as to whether the prosecution conducted a full and thorough investigation of the case against the accused prior to confirmation … the prosecution offers no cogent and sufficiently specific justification for why so many witnesses in this case were only interviewed for the first time post-confirmation … there can be no excuse for the prosecution’s negligent attitude towards verifying the trustworthiness of its evidence.”

Another prosecution error came to light this week, this one even more fundamental. It emerged in a hearing that somehow the charges pressed by the prosecution against Ruto and Sang only cover events in 2008, meaning that atrocities committed in on 30 and 31 December 2007 are not within the scope of this trial. An attempt to change this was thrown out by the court, although the prosecution will appeal. Still, it’s another disturbing sign that the prosecution is not firmly in control of this process.

Making their job even harder are the continual threats and intimidations directed towards key witnesses which have led to a number dropping out – as many as 33, according to some reports (the ICC has declined to confirm this). “In Kenya we have seen unprecedented levels of threats to witnesses. We have also seen unprecedented reports of witnesses allegedly withdrawing,” said prosecution spokesman Phakiso Mochochoko. This is hardly a surprise. Given the nature of the charges against the accused, and the fact that two of the three accused now occupy the most powerful positions in the country, it would take an exceptionally brave witness to take the stand against any of them.

All this adds up to a situation where, despite the progress made in getting Ruto and Kenyatta to actually stand trial, neither are likely to serve any jail time. They’ve been one step ahead of the prosecution ever since their names were released, and they can now wait comfortably for the trial to take its course, knowing that even if they are found guilty there is no one in power in Kenya who will compel them to serve their time or who will hand them over to the relevant authorities. They, after all, are the authorities in Kenya and they’ve secured the continent’s support. More likely both expect that the combination of the prosecution’s weak case and mistakes made in building it, coupled with the reluctance of nervous witnesses to speak out against them, will result in their innocence being proclaimed by the highest court in the world. DM

High stakes trial of Kenya’s Ruto to open at ICC, from AFP

Photo: Kenya’s Deputy President William Ruto (C) leaves the Jomo Kenyatta airport in Nairobi, as he makes his way to the International Criminal Court at The Hague September 9, 2013. The approaching trials of Kenya’s President Uhuru Kenyatta and Ruto in The Hague are worrying the upland communities that were rent apart by a post-election bloodbath more than five years ago, violence the two men are accused of orchestrating. REUTERS/Thomas Mukoya