Thuli Madonsela on Nkandla: An election puzzler for the ANC 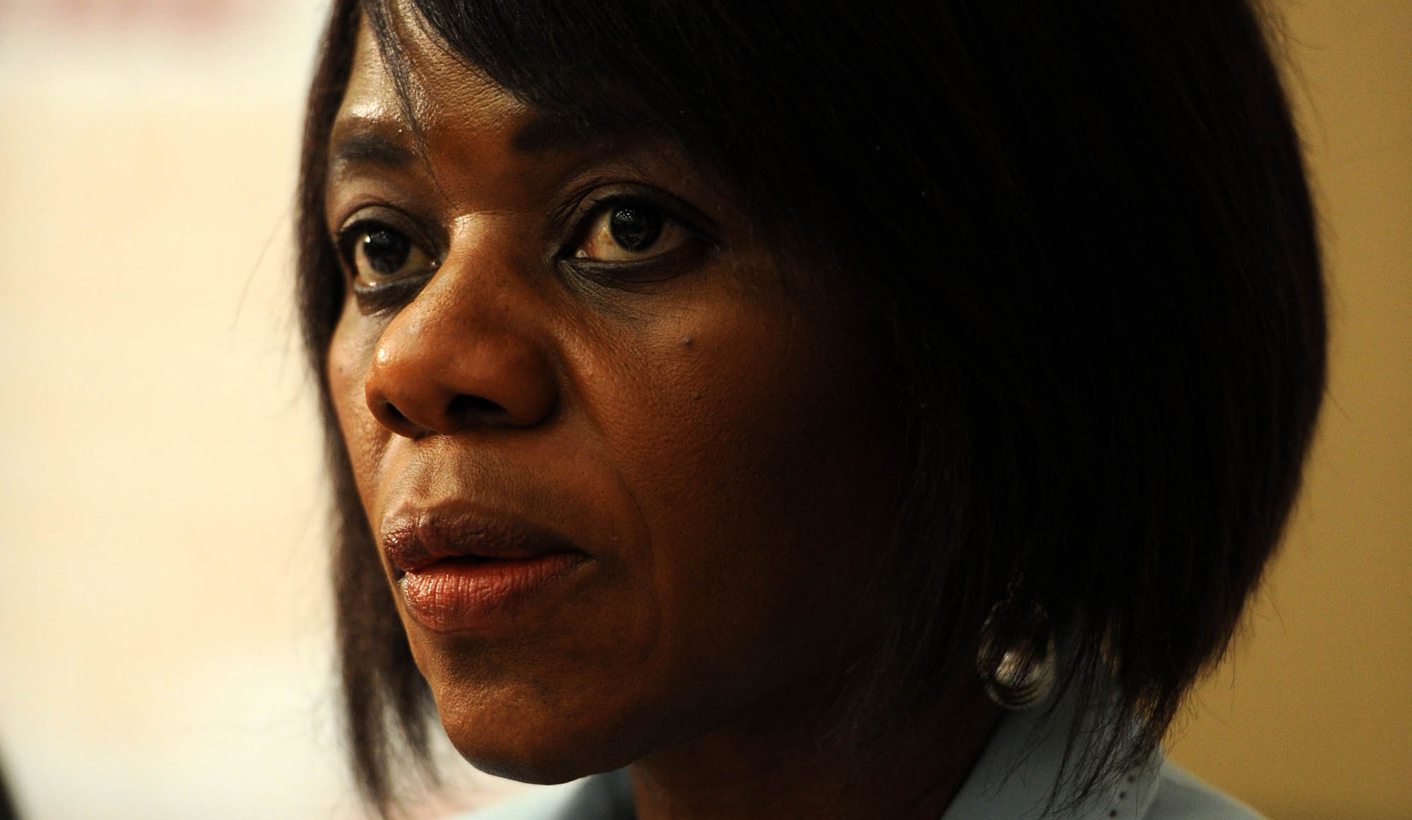 The report of the Public Protector on the upgrades at President Jacob Zuma’s Nkandla estate is perhaps the most anticipated investigation ever conducted in post-Apartheid South Africa. Advocate Thuli Madonsela is no doubt aware of how high the stakes are, having to probe spending on the private residence of a sitting president and the implications for the state and the ANC this close to a national election, should there be negative findings. Reports of political pressure from members of Cabinet for her to drop the investigation shows the level of panic. But will Nkandla and other scandals dent the ANC’s image or will the ruling party be able to shake them off in its march towards a fifth term in government? By RANJENI MUNUSAMY.

“Zuma is president of the ANC – what can we do?” This was the response of ANC secretary general Gwede Mantashe when asked last week by PowerFM’s Chris Vick whether Jacob Zuma was the ideal presidential candidate for the party for the 2014 elections. Mantashe, although not known for subtlety, probably did not intend for the statement to sound as it did, that the ANC is saddled with Zuma and has no choice but to carry him to a second term as state president. He was probably making the point that Zuma was the choice of the ANC branches and therefore the party will maintain the tradition of the ANC president running as state president, even though it is not a constitutional requirement.

But there is subtext in Mantashe’s comment. Zuma’s administration has been plagued by scandal, corruption and poor performance, which will clearly haunt the ANC on the election trail. The party will therefore have to be on the defensive during the campaign, trying to explain away the scandals as bad press while trying to project the good news narrative of government’s delivery record.

This is a markedly different approach to the way the ANC ran every other election campaign up to now.

In 1994 the ANC rode the crest of the wave, having triumphed over Apartheid and leading a peaceful transition to democracy. The excitement in the country was so overwhelming that the ANC did not need the iconic status of Nelson Mandela to claim an overwhelming victory as the party itself had tremendous appeal. But Mandela was and always will be a powerful draw card for the ANC, which is why it used him even in a fragile state to seal the deal in the 2009 election campaign, and why the Democratic Alliance is trying its best to sponge off Mandela’s image now.

In 1999, the face of the ANC campaign was Thabo Mbeki, its crown prince, the man schooled under Oliver Tambo to run the organisation and the country. Mbeki was presented to South Africa as a gift bestowed by the ANC dynasty, with his mystique and intellect beguiling the nation. By 2004, Mbeki had lost his sheen but the election campaign that year was packaged around continuity and keeping the country on track.

The 2009 campaign was the ANC re-invention under the people’s president. Zuma wanted to return the ANC to be a grassroots organisation, bridge the divides and bring government closer to the people. The ANC would therefore be more responsive to the needs of the people, particularly the poor. In that campaign, the ANC was acknowledging some of its mistakes of the past and the intention was to refocus on domestic issues, rather than the Africa agenda Mbeki pushed during his presidency.

While the ANC’s campaigns are always about more than just who its president is, the top of the ticket always influences how the party is perceived. Even though South Africans do not directly elect the president, it is the face of the party leader on the billboards and posters, and most importantly, on the ballot paper.

Zuma’s 2009 election speak about his plans for poverty alleviation and rural development were particularly believable because he still lived in one of the poorest parts of the country and had a deep understanding of the hardships of life in areas such as Nkandla. Nkandla was his link to the biggest constituency in the country, the poor. While many political leaders had family homes in rural areas, Nkandla was Zuma’s primary home, and not a place he just visits occasionally. It is where he goes when he needs time out, he votes there and he spends Christmas there. This had resonance with many poor people and migrant workers who saw him as one of them.

Well, until a normal homestead in the KwaZulu-Natal heartland became the eyesore on the hillside. The R206-million upgrade to the Zuma estate in Nkandla has turned out to be one of the biggest scandals of this administration, with no possible justification for the exorbitant spending by the state and a series of cover-ups to protect those responsible for it. The revelations about the excessive state spending at the homestead has caused embarrassment for the ANC and its alliance partners, although few people are willing to say so on the record.

More than the outrageous cost, the effect of the Nkandla renovations has been another example of the crass display of wealth of people with humble beginnings who used their political positions to skim off the state. It inevitably results in the distaste so many people have for their elected representatives.

For Zuma, the thing that bound him to so many people around the country has now become the very thing that disconnects him from them.

Thulas Nxesi, the Minister of Public Works, has successfully blocked the findings of the government investigation into the Nkandla renovations being made public by arbitrarily classifying the report as top secret. It was a sign of contempt for the taxpayer who footed the bill and the constitutional imperatives of transparency and accountability.

The great fear now is the findings of the Public Protector Thuli Madonsela’s investigation into the matter. Madonsela’s report was initially meant to be released in March but has dragged on as she struggles to source all the necessary information related to the upgrade.

Madonsela is not one to conduct a half-baked investigation – no matter how sensitive the matter, she is determined to do her job properly and determine whether there was any impropriety in the state-funded work at Nkandla. Madonsela is not one to conceal misdeeds for the sake of political expediency, which is why there is a trail of political heavyweights who have felt the whip of her thoroughness. She is unlikely to do otherwise this time, just because she is dealing with the home of the state president. And should there be proof of misuse of state money, it will no doubt provide ammunition to opposition parties to fire at the ANC and Zuma on the campaign trail.

There seems to be a realisation that it would be too late to do damage control after Madonsela’s report has been released and the only way to protect Zuma, the ANC and state from further embarrassment is to prevent the investigation from being completed. The Sunday Times reported this week that a squad of Cabinet ministers have tried to strong-arm Madonsela to drop the Nkandla investigation. According to the paper, Nxesi, police minister Nathi Mthethwa and state security minister Siyabonga Cwele tried to convince Madonsela that the investigation could be better done by the auditor-general Terence Nombembe.

After Madonsela rejected a letter from the state attorney’s office purporting to record her agreement to drop the investigation, she met with four ministers at the Department of Public Works, the paper reported. Several of the ministers and the state law advisor Enver Daniels confirmed they held discussions and meetings with Madonsela but denied that these were to bully her into dropping the probe.

With Nxesi’s determination to suppress the government investigation report and other Cabinet ministers now rallying to lean on Madonsela to back off, it does appear that there is something to hide. All these efforts are a sure sign of desperation at the highest levels in government.

Democratic Alliance parliamentary leader Lindiwe Mazibuko, who requested the public protector investigation, said she would be posing questions in Parliament to all the ministers who supposedly met with Madonsela to ascertain whether it was true that they tried to coerce her to drop the probe.

“Chapter Nine institutions such as the public protector’s office are meant to be protected from political interference … The allegation that members of the executive attempted improperly to interfere with her work is a very serious one, which deserves a full explanation.

“Not only are these alleged actions unethical, but they make all Ministers who participated in this series of ‘meetings’ complicit in the Nkandlagate scandal and its cover-up,” Mazibuko said.

Madonsela’s report on Nkandla is expected soon and the opposition will be eagerly awaiting evidence that the president was aware of the overspending and consented to it. This is the smoking gun they seek to show that Zuma is unworthy of the high office he is entrusted with.

But even in the unlikely event that Madonsela is able to provide documentary evidence of Zuma’s culpability, it is improbable that anyone other than officials low down in the food chain would be held to blame. In any event, the public protector is only able to make recommendations on sanctions and remedial action and these are not enforceable.

Like with all the scandals that have hit the Zuma presidency, including the splurges by Cabinet ministers, the Marikana massacre, the non-delivery of textbooks, the deaths of soldiers in the Central African Republic and the Guptagate episode, executive responsibility is scarce. The strategy is to play down the crisis and wait for public attention to move on. And it always does – either through scandal fatigue or because something new and even more shocking is in the news. The ANC opts to stand far back when such scandals play out so that the party can dust them off as activities of the state.

But Thuli Madonsela is not like some government task team or commission that can be manipulated. She is believable and credible, and though she has no powers to punish wrongdoing, a rebuke from her would be damaging. Efforts by people in the ANC and the alliance to discredit and suppress Madonsela has only won her more public support and built her legend. In her investigations, Madonsela has exerted more pressure on the ANC government than all the opposition parties put together.

The question is whether by the time the election campaign is in full swing, Nkandlagate will be just a catchphrase kept alive by the opposition parties while the ANC says it has nothing to do with the party, or whether something in Madonsela’s report would be significant enough to stick in voters’ minds.

Judging by the number of nervous people around, it is not an easy call to make. DM