A chronicle of Apartheid’s propaganda war on black America 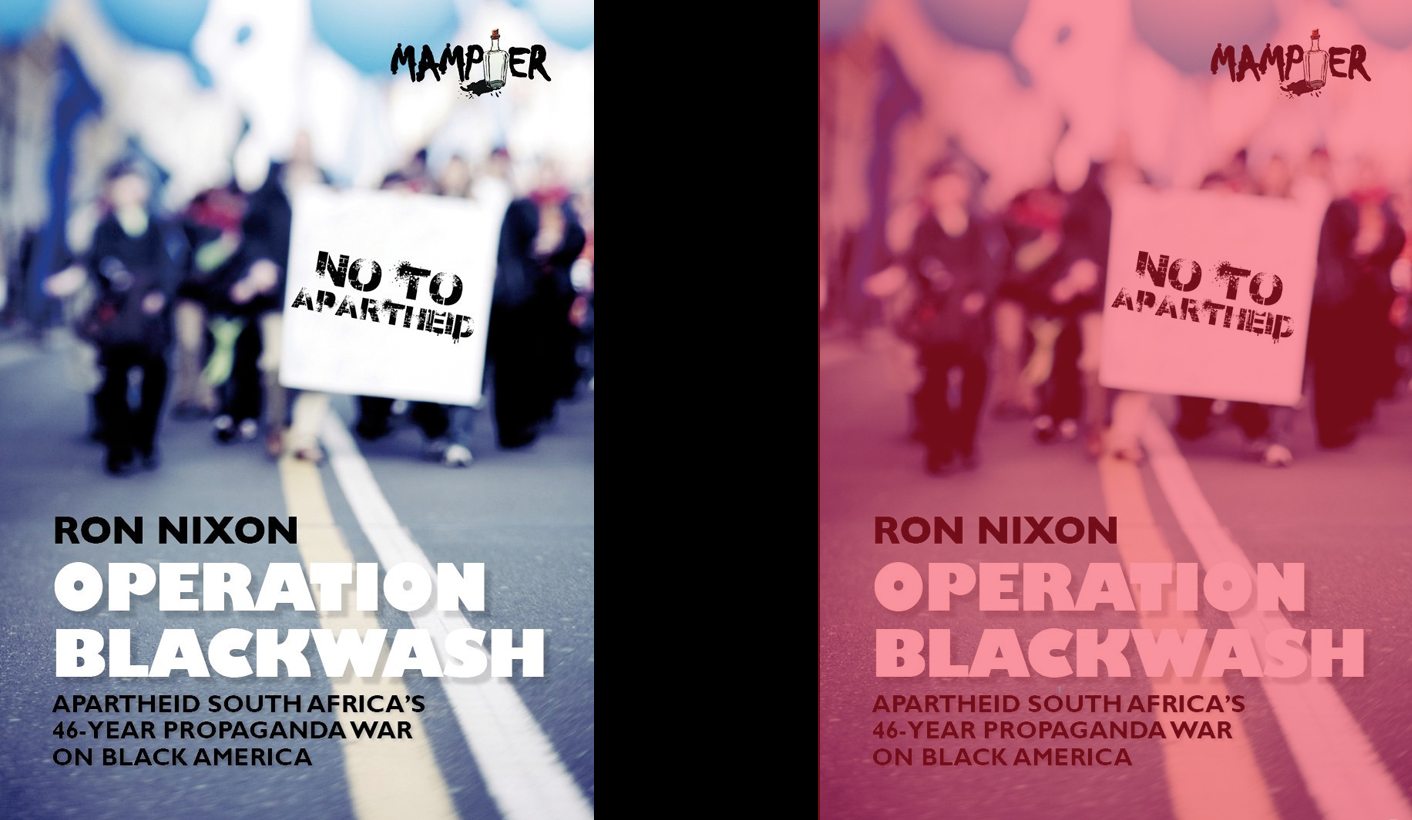 New York Times correspondent Ron Nixon has written a remarkable account of how the Apartheid government repeatedly attempted to win the hearts and minds of African Americans. Though it’s well known that the Apartheid regime spent millions on its propaganda war internationally, this chronicle of its focus on black America makes for startling reading, and not just because the Nats used black Americans as their primary shills. By REBECCA DAVIS.

Ron Nixon’s Operation Blackwash: Apartheid South Africa’s 46-year propaganda war on black America is one of the recent publications by Mampoer Shorts, the South African initiative which sells pieces of long-form journalism as individual e-books. In its 11 months of existence Mampoer has racked up a short but impressive list of titles and authors, and Nixon’s piece is no exception. At 46 pages, it’s a quick read, but a gripping one, shedding light on a little-known corner of Apartheid history.

At a time when debate over Apartheid corruption is in the news again, it’s helpful to be reminded that one aspect of state expenditure that the government never scrimped on was propaganda. The Apartheid government’s worldwide propaganda campaign, aimed at improving its image internationally, was believed to have cost around $100-million per year. The targeting of black America, Nixon notes, was by no means its most costly or dedicated project. But it was surely one of its most bizarre.

Nixon’s piece not only tells the story of the propaganda war inside black America. It is also an interesting chronicle of America’s relations with Apartheid South Africa, and of the anti-Apartheid resistance movement in the States. The black-led anti-Apartheid movement in the US has its roots as far back as 1937, although at that time its wider concern was decolonization in Africa. The International Committee on African Affairs (later the Committee on African Affairs – CAA) was set up at the time to act on the problem. Its vice-chair was the renowned black sociologist WEB Dubois.

The CAA’s co-founder was a man called Max Yergan, who was one of the most eminent black Americans of his time. Yergan spent 14 years living in South Africa, during the course of which he helped to politically coach a young Govan Mbeki. But Yergan would abandon his pro-equality principles in a bizarre fashion. Following a leadership struggle in the CAA, during which Yergan was accused of being behind various financial irregularities, he left the organization in 1948 and almost immediately underwent “a complete transformation, going from a committed opponent of colonialism to a rabid anti-communist and defender of white-led governments in Africa”.

For his willingness to sing the praises of the Apartheid government, Yergan was granted “honorary white” status by the Nats. During the 50s and 60s the South African Foundation, a business group with close links to government, brought Yergan to South Africa repeatedly to help promote the policy of separate development, which he did even while his white wife was denied permission to travel around South Africa with him.

What caused Yergan’s drastic change of heart? Was it simply his sense of betrayal by the movement he had helped found? Nixon doesn’t offer any speculation, which both frustrates and intrigues. But he goes on to profile many other African Americans who shilled for Apartheid, and in the majority of cases they appear to have been motivated (other than by fat salaries) by fervently anti-communist beliefs which held that the South African government was a necessary bulwark to prevent the Soviet Union getting its paws on Africa.

The government’s propaganda attempts in America were of limited scope prior to the Soweto Uprising in 1976. When images of Hector Pieterson and other gunned-down students were beamed across the States, however, they galvanized Apartheid’s opponents. Fortunately, the Apartheid regime had just the man to handle their escalating PR nightmare: a black vice-president in the PR firm Sydney S Baron called Robert T Hatcher. Hatcher, like Yergan, was a prominent and well-respected individual, in Hatcher’s case because he had made headlines for being the first black staff member in the White House.

“Given his stature in the black community as a history-making White House staffer, the South African government hoped Hatcher’s skin colour would help deflect criticism and refute claims that the country was run by a racist government that denied black citizens basic rights,” Nixon writes. Hatcher got busy: he encouraged black businesses to invest in South Africa, set up trips to the country for black American legislators and journalists who could be relied upon to report back positively and made media appearances defending Apartheid interests.

In 1976, Nixon records, Hatcher appeared on the Today show to debate a white anti-Apartheid activist. Hatcher claimed that the true racists were white liberals who thought they knew what was best for blacks. His opponent hit back by saying that “a black man defending South Africa for money is not unlike seeing a Jew hired by the Nazis”.

At least two other black lobbyists followed in the early 80s. Jay Parker promoted the interests of the Transkei and Venda before taking on the representation of the South African government, and in 2009 wrote an unrepentant biography tellingly titled Courage to Put My Country Above Colour. William A Keyes, a former policy advisor to Ronald Reagan, was hired by the South African embassy to act as “Pretoria’s point man to the US black community”, and was paid almost $400,000 for his services.

But by 1986 it was clear that the propaganda campaign wasn’t working. Though Reagan opposed sanctions on the Apartheid regime he was outvoted by Congress and the Comprehensive Anti-Apartheid Act passed. Anti-Apartheid activists, invigorated by this success, wanted to see complete American disinvestment in South Africa. “What Pretoria needed was a more sophisticated and subtle approach – one that did not publicly try to defend the apartheid system,” records Nixon. “The Apartheid government needed a message that would resonate with American blacks. It was about to come from an unlikely source.”

In 1987, Reagan was approached by a group calling itself the Coalition on Southern Africa: a collection of respected black religious ministers, black businessmen and black academics. So far so good when it came to sanctions, the group said, but enough was enough. What was now necessary was to “help black South Africans prepare for a post-Apartheid society” by fostering business and educational links between black Americans and black South Africans. The group had trustworthy credentials. The religious figures were linked to denominations that actively opposed Apartheid, and one, Reverend Gilbert Caldwell, had actually been arrested for protesting outside the South African embassy.

Coalition members spoke out against further sanctions. They visited South Africa to distribute food, clothes and books in Alexandra township, as well as, in what may have been the beginning of her philanthropic interest in South Africa, a cheque for $7,500 from one Oprah Winfrey. Their anti-sanctions stance raised some eyebrows in the American media, but other commentators noted that their emphasis on the real human beings affected by Apartheid was commendable.

Except… it wasn’t. Someone, we still don’t know who, delivered a package to an interfaith advocacy centre in New York. The package contained hundreds of pages of a document called the “Neptune Strategy”, a plan by a PR firm called Pagan International to develop a taskforce of activists to shift the conversation on South Africa away from disinvestment and towards post-Apartheid life. Who had hired Pagan International? Shell. The oil company had some pretty forceful reasons not to want to withdraw their business from South Africa. At the time Shell’s investment in the country totalled around $400-million.

The Coalition wasn’t just funded by Shell, Nixon writes, it was also funded by other US firms with South African interests, like Johnson & Johnson and Pfizer, who came together to contribute $1.2-million to start the body. Shell said afterwards that the Neptune Strategy was just a form of brainstorming on Pagan International’s part that had never been acted on. Pagan would only confirm that it had provided the Coalition with free office space, telephones and travel. Several Coalition members resigned following the Shell revelations, but Nixon writes that records show that the likes of Caldwell “had known all along that the coalition was a front for US corporations with operations in South Africa”.

Today, Caldwell is lauded for his work in promoting gay acceptance by the Methodist Church. He told Nixon: “I firmly believe that I was trying to change things from the inside … I was trying to do the right thing.” As for Shell, it’s a reminder, at a time when the oil company has applied for a fracking exploration license, that the corporation has rarely acted with the best interests of the majority of the population in mind.

Nixon’s piece has plenty of other historical nuggets. Some may not know, for instance, that civil rights hero Rosa Parks was arrested for protesting outside the South African embassy in New York in 1984, on the 29th anniversary of her arrest for refusing to cede her place to a white man on a bus. It’s a reminder that for the handful of black Americans who proved willing to peddle Apartheid propaganda, there were thousands more whose vocal insistence on regime change in South Africa helped bring around the dismantling of the Apartheid state. DM