Searching for a heart of gold: NUM workers strike 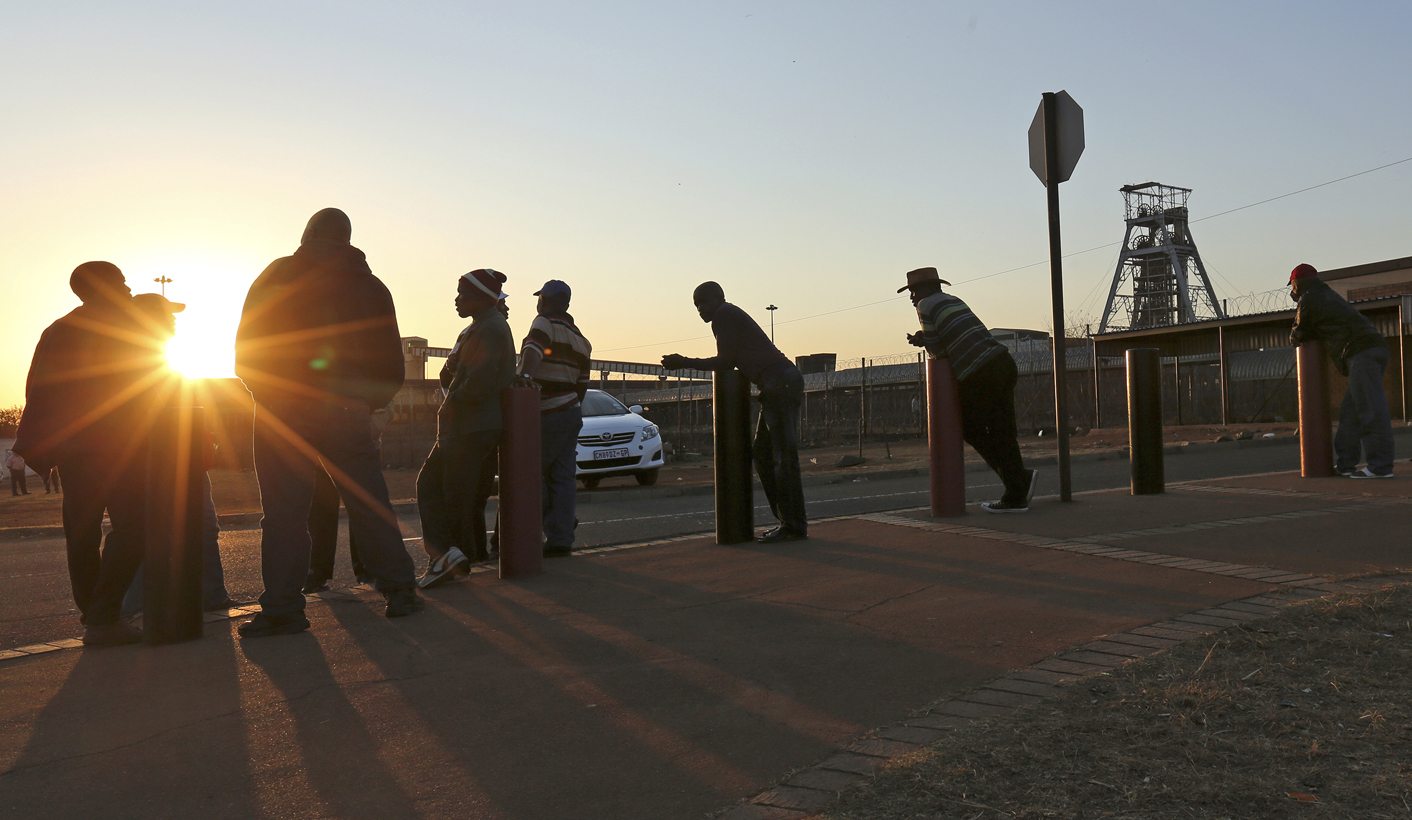 National Union of Mineworkers (NUM) members embarked on a strike in the gold sector on Tuesday evening after months of failed negotiations. Neither the employers nor the union, which has the most members in the industry, want to budge. If a solution is not found soon, dire consequences await. By GREG NICOLSON.

When strikes swept the mining industry in 2012, NUM was the big loser. The union that helped fight Apartheid and has produced so many South African leaders was accused of selling out to mining companies and politicians. Almost 20 years after the dawn of democracy, there were few noticeable differences in the industry that played a key part in the country’s brutal past. The only thing that had changed, said critics, were the bank accounts of union leaders. The Association of Mineworkers and Construction Union (AMCU) rose to prominence while NUM was labelled the National Union of Management.

This year, NUM is leading the strikes in the gold sector. Hours before more than 80,000 employees, the majority in the industry, didn’t turn up to the night shift, the union sent out a stern press release. The “arrogance” of CEOs with huge bonuses means “the union is forced to embark on nationwide industrial action that will change the gold mining landscape forever”, said spokesperson Lesiba Sheshoka. NUM says it will not budge from demands for an extra R2,300 for surface workers and R3,000 for underground miners. “The union reiterates its position of rejecting with contempt slave wages as represented by an increase of a meagre 6.5% or R300 per month.”

NUM’s relentless demand for pay rises of up to 60% is reminiscent of the determined strike committees that led last year’s industrial action. “Gold companies to face the music tonight” the union’s press release was titled and it went on to speak of NUM’s unshakable determination and pending victory for workers. As the union still battles to keep members from shifting to AMCU, the demands look to challenge the perception that NUM doesn’t care about its members.

Gold producers, however, say there is no way the demands can be met. The Chamber of Mines, which negotiates on behalf of AngloGold Ashanti, Gold Fields, Rand Uranium, Harmony Gold, Evander Gold Mine, Sibanye Gold and Village Main Reef, made its final to all unions offer last week. It included a 6.5% increase for category four and five employees (including rock drill operators), 6% for miners, artisans and officials in categories six to eight and accommodation allowance increases in line with inflation. The Chamber also said employees could earn an extra 1% on their salary through gain share offers. “Our final offer is just that – a final offer,” Harmony CEO Graham Briggs made clear.

The Chamber said the offer would bring the average entry-level salary for underground workers to R9,170, which includes a basic wage, as well as medical benefits, contribution to provident fund and housing, leave and food benefits or allowances. Briggs said in 2012, strikes in the gold industry cost companies R349-million in revenue a day and employees lost R100-million in salaries each day. “The gold industry is at stake and with it we believe that South Africa is at stake,” he warned. UASA has accepted the wage offer while NUM, AMCU and Solidarity still hold out.

“It’s just not feasible,” Charmane Russell commented on the demands, speaking on behalf of the gold producers, on Tuesday. Union rivalry has been a factor in the negotiations, she said, but unlike the platinum industry, the gold sector negotiations include all represented unions and throughout the process relations have been cordial. The parties are engaging, and will continue to engage, outside the CCMA facilitation, she said.

The NUM is yet to suggest it will compromise. On Tuesday, the union even questioned government leaders for cautioning against industrial action.

Speaking to media on Tuesday morning, President Jacob Zuma warned against more strikes in the mining industry. “Government can only appeal to parties to find a solution. I don’t think we can tell the management of the mine ‘accept what the workers are saying’, nor can we tell [that to] the workers … We just appeal that the two parties must find one another because a protracted strike is not helpful to the country nor to the industry itself.” Issues like strikes and corruption have continued to influence investor confidence, and Zuma urged media to help tell the positive side of the country’s story.

“We are really very concerned,” mineral resources minister Susan Shabangu told reporters on Tuesday. “If indeed we are going to have a protracted industrial action, it will impact negatively on the economy.”

There are fears that employers will decide to implement a lockout. Russell said gold producers have considered the option but want to avoid a lockout and would not take the decision lightly. They will implement a lockout only in specific circumstances – if an agreement cannot be reached or the safety of employees is at risk.

AMCU president Joseph Mathunjwa, speaking over the phone on Tuesday, said his union has not served a notice to strike and will report for duty. “We have told these (companies) they mustn’t act stupid,” he said on the prospect of a lockout. “Our workers mustn’t be intimidated by management if they want to work.” AMCU was the last remaining party in the negotiations before the Chamber of Mines walked out, said Mathunjwa, who is still consulting members on whether to use industrial action to resolve the dispute.

Two miners, an AMCU member from Gold Fields and a NUM member from Sibanye (both who wanted to remain anonymous), said there is little appetite for a prolonged strike. The NUM member believes the companies could afford the increases but also believes they will not match the high demands. After workers lost money during the 2012 strikes, he said, they cannot afford to do the same this year. The AMCU member said before the union decides what to do members are looking to see how successful the NUM’s strike is. “I don’t think we’ll go to strike,” he said, but added the gold producers’ offer is too low.

The politicised labour environment results in neither union wanting to look weaker than the other. The NUM needs to save face from its embarrassing 2012 and if members have the appetite it will want to follow through on its tough talk. A prolonged strike could cripple the industry, according to the companies, and damage the SA economy. Each party could face dire consequences for budging from their positions, but if a compromise is not found soon, a lose-lose means both the economy and the workers will suffer. DM

Photo: Mine workers await their shift outside the Doornkop Gold Mine, about 30 km (19 miles) west of Johannesburg September 3, 2013. South African President Jacob Zuma on Tuesday appealed to unions and companies in the gold industry to avoid an imminent strike that could seriously damage Africa’s largest economy, force mine closures and cost thousands of jobs. Gold miners were set to strike for higher pay from Tuesday, after talks between unions and companies broke down last week. REUTERS/Siphiwe Sibeko