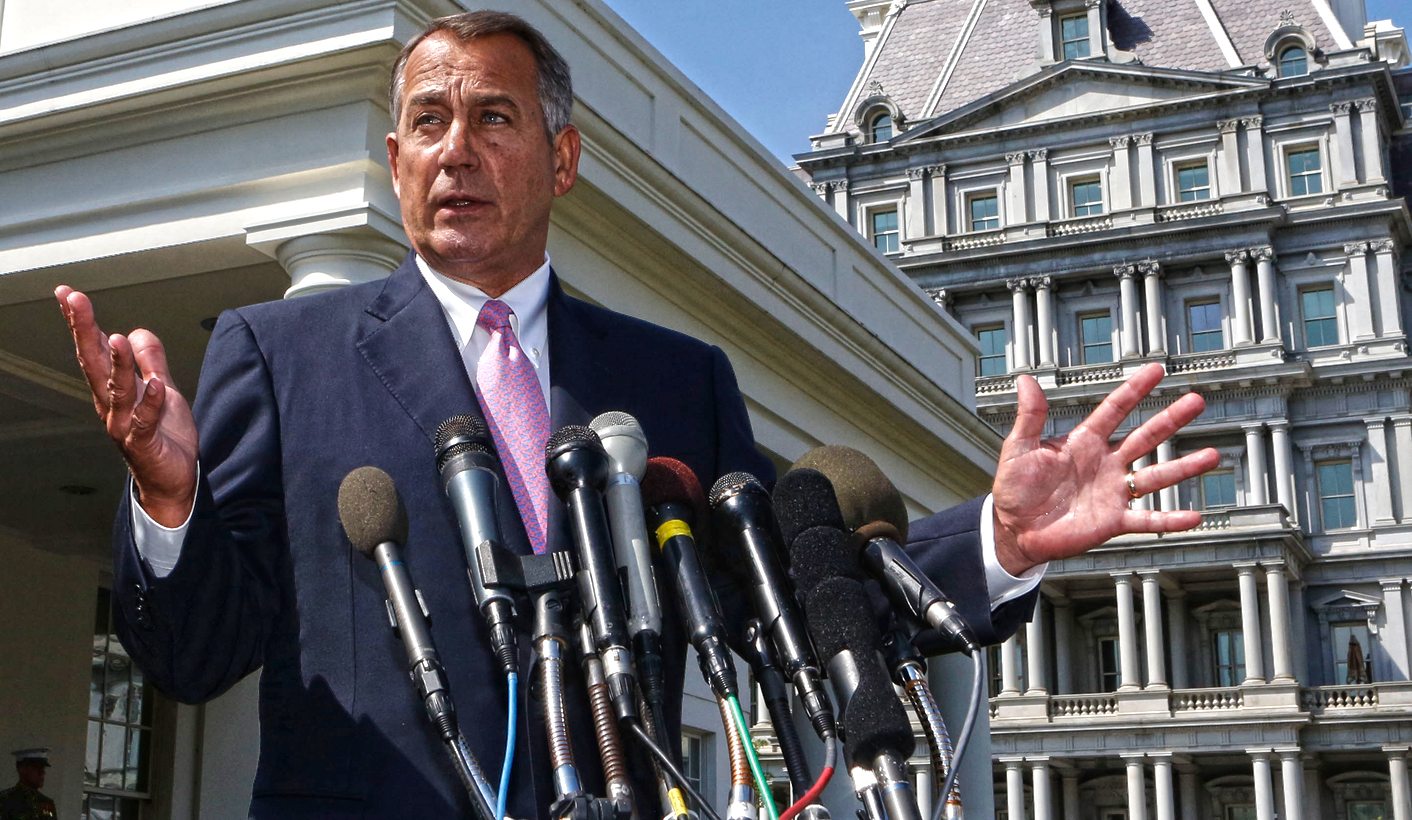 President Barack Obama won the backing of key figures in the U.S. Congress, including Republicans, in his call for limited U.S. strikes on Syria to punish President Bashar al-Assad for his suspected use of chemical weapons against civilians. By Jeff Mason and Yara Bayoumy.

Speaking after the United Nations said two million Syrians had fled a conflict that posed the greatest threat to world peace since the Vietnam war, Obama said the United States also has a broader plan to help rebels defeat Assad’s forces.

In remarks that appeared to question the legality of U.S. plans to strike Syria without U.N. backing, Secretary-General Ban Ki-moon said the use of force is only legal when it is in self-defence or with Security Council authorization.

If U.N. inspectors confirm the use of chemical weapons in Syria, the Security Council, which has been deadlocked on the 2-1/2-year Syrian civil war, should overcome its differences and take action, Ban said.

Having startled friends and foes alike by delaying a punitive attack on Assad until Congress reconvenes and agrees, Obama met congressional leaders at the White House to urge a prompt decision and assure them it did not mean another long war like Iraq or Afghanistan.

John Boehner, the Republican speaker of the U.S. House of Representatives, and House Majority Leader Eric Cantor both pledged their support for military action after the meeting.

Votes are expected to be held in the Senate and House next week, with the Republican-led House presenting the tougher challenge for Obama.

The House leadership has indicated the votes will be “conscience votes,” meaning they will not seek to influence members’ votes on party lines. All the same, it would have been a blow to Obama if he had not secured the backing of the top two Republicans.

“I believe that my colleagues should support this call for action,” Boehner told reporters.

The president said strikes aimed at punishing the use of chemical weapons would hurt Assad’s forces while other U.S. action would bolster his opponents – though the White House has insisted it is not seeking “regime change.”

“What we are envisioning is something limited. It is something proportional. It will degrade Assad’s capabilities,” Obama said. “At the same time we have a broader strategy that will allow us to upgrade the capabilities of the opposition.”

The Syrian opposition, which said a forensic scientist had defected to the rebel side bringing evidence of the Assad forces’ use of sarin gas in March, has appealed to Western allies to send them weapons and use their air power to end a war that has killed more than 100,000 and made millions homeless.

The presence in rebel ranks of Islamist militants, some of them close to al Qaeda, has made Western leaders wary, while at the same time the undoubted – and apparently accelerating – human cost of the conflict has brought pressure to intervene.

Top House Democrat Nancy Pelosi also voiced support for military strikes after meeting Obama, but he will still have to persuade some lawmakers, including Democrats, who have said they are concerned the president’s draft resolution could be too open-ended.

U.S. Secretary of State John Kerry and Secretary of Defence Chuck Hagel took the administration’s message to a Senate Foreign Relations Committee hearing, where they were pressed on whether the resolution put to Congress would explicitly rule out the use of ground troops.

Kerry said the language of the resolution was still being worked out, but it was important to leave options open for using troops in a scenario where “Syria imploded” and stockpiles of chemical weapons needed to be secured from extremists.

“I don’t want to take off the table an option that might or might not be available to the president of the United States to secure our country,” he said at the hearing.

When some senators objected to the idea of “boots on the ground”, Kerry said the administration would work with Congress to draft a resolution that addressed concerns about ground troops.

“I know the administration has zero intention of putting troops on the ground and within the confines of this authorization, I’m confident we’d have zero problem with including some kind of prohibition there if that makes you comfortable,” he told the senators.

A Reuters/Ipsos poll showed on Tuesday that Obama has failed so far to convince most Americans. Some 56 percent of those surveyed said the United States should not intervene in Syria, while only 19 percent supported action, essentially unchanged from last week.

The U.N. High Commission for Refugees said there had been a near tenfold increase over the past 12 months in the rate of refugees crossing Syria’s borders into Turkey, Iraq, Jordan and Lebanon – to a daily average of nearly 5,000 men, women and children.

This has pushed the total number of Syrians living abroad to more than 2 million.

That represents some 10 percent of Syria’s population, the UNHCR said. With a further 4.25 million estimated to have been displaced but still resident inside the country, close to one third of all Syrians are living away from their original homes.

Comparing the figures to the peak of Afghanistan’s refugee crisis two decades ago, U.N. High Commissioner for Refugees Antonio Guterres, said: “Syria has become the great tragedy of this century – a disgraceful humanitarian calamity with suffering and displacement unparalleled in recent history.”

“The risks for global peace and security that the present Syria crisis represents, I’m sure, are not smaller than what we have witnessed in any other crisis that we have had since the Vietnam war,” said Guterres, a former Portuguese prime minister.

Russia, backed by China, has used its veto power in the U.N. Security Council three times to block resolutions condemning Assad’s government and threatening it with sanctions. Assad, like Russia, blames the rebels for the Aug. 21 gas attack.

Obama has said he is “comfortable going forward without the approval of a United Nations Security Council that so far has been completely paralysed and unwilling to hold Assad accountable.”

“Who asked Mr. Obama to be the bully of the world?” Ja’afari said.

Obama was due to leave Washington on Tuesday for a G20 meeting in Russia. France said foreign ministers of some of the G20 member states will convene on the sidelines of the meeting to discuss Syria.

The conflict has divided the Middle East on sectarian lines, with Shi’ite Iran backing Assad and Washington’s Sunni Arab Gulf allies supporting the mainly Sunni rebels. It has also revived Cold War-style tensions between the Western powers and Moscow.

In an interview in Le Figaro, Assad told the French newspaper: “Everybody will lose control of the situation when the powder keg blows. There is a risk of a regional war.”

The influential pro-Israel lobby group AIPAC urged U.S. lawmakers to approve a resolution authorizing strikes to punish Assad. “This is a critical moment when America must also send a forceful message of resolve to Iran and Hezbollah – both of whom have provided direct and extensive military support to Assad,” AIPAC said in a statement.

The rebels have been struggling to hold ground in recent months, let alone advance. According to one opposition report, government forces took the strategic northwestern town of Ariha on Tuesday, though others said the battle was not over.

While Obama’s wait for Congress to return from its summer recess seems to rule out Western military action this week, Israeli forces training in the Mediterranean with the U.S. Navy set nerves on edge in Damascus with a missile test.

When Moscow raised the alarm that its forces had detected the launch of two ballistic “objects” in the Mediterranean, thoughts of a surprise strike on Syria pushed oil prices higher.

Clarification came only later when the Israeli Defence Ministry said that its troops had – at the time of the Russian alert – fired a missile that is used as a target for an anti-missile defence system during an exercise with U.S. forces. DM

Photo: Speaker of the House John Boehner speaks to the press after meeting with U.S. President Obama and bipartisan Congressional leaders in the Cabinet Room at the White House in Washington while discussing a military response to Syria, September 3, 2013. REUTERS/Larry Downing