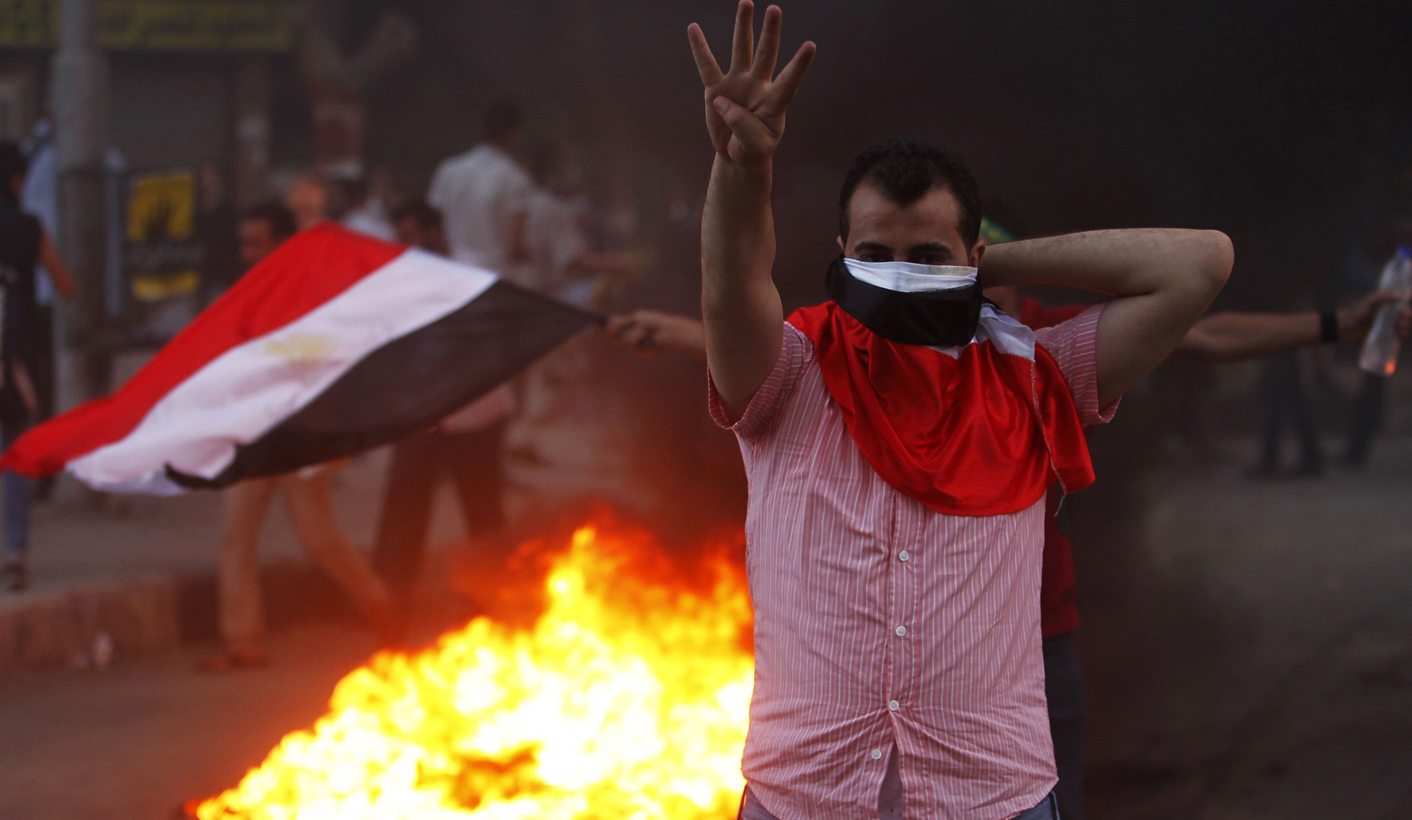 Egypt's army-backed authorities referred deposed President Mohamed Mursi to trial on Sunday on charges of inciting murder and violence, in an escalation of the crackdown on his Muslim Brotherhood. By Tom Perry.

The new government also named a constituent assembly almost devoid of Islamists and gave it 60 days to review amendments that would erase Islamic articles brought in last year by the Brotherhood and more hardline Islamic parties.

Nearly two months after the army deposed Mursi, the moves underscored Egypt’s dramatic power shift as its new rulers tighten their grip and crack down on the Islamists who rose to power through the ballot box after Hosni Mubarak’s downfall.

A state prosecutor charged Mursi and 14 other Brotherhood members with “committing acts of violence, and inciting killing and thuggery”, the state news agency reported.

The charges relate to violence in which around a dozen people were killed outside the presidential palace last December, after Mursi had ignited protesters’ rage with a decree that expanded his powers.

The episode was one of the most violent of his presidency. Tens of thousands gathered outside the presidency to demonstrate against Mursi’s decree and a divisive, Islamist-tinged constitution that he planned to put to a referendum.

The Brotherhood’s leaders called on members to rally to his defence. The state news agency said they were now accused of mobilising their followers to forcibly disperse the protesters after the security forces rejected Mursi’s orders to do so.

The charges against Mursi include inciting his followers and assistants to commit crimes of premeditated murder and use violence and thuggery.

Mursi is also being investigated over his escape from jail during the 2011 uprising against Mubarak. He is suspected of murder and conspiring with the Palestinian group Hamas during his escape, though no formal charges have been brought.

Both the European Union and the United States, source of $1.3 billion in annual military aid to Cairo, had called for Mursi’s release after he was detained following his overthrow on July 3.

He was toppled just a year into his term following mass protests fuelled by anger at economic mismanagement and Brotherhood attempts to entrench its power.

His downfall has led to some of the worst violence in Egypt’s modern history, in the form of protests by his supporters, a bloody police crackdown on those supporters, and militant attacks on the police and churches.

At least 900 people, most of them Mursi supporters, were killed last month after the authorities smashed two protest camps set up by Mursi’s supporters in Cairo.

Around 100 of the dead were members of the security forces, killed in what the state has described as a Brotherhood campaign of terrorism. The group denies resorting to violence, saying the government is using the charge to justify the crackdown.

Mursi’s fall has also triggered a spike in violence in the Sinai Peninsula, where hardline militants expanded into a security vacuum left by the 2011 uprising against Mubarak.

Underlining the growing threat of attacks, an army source said three people had been arrested for opening fire with machine guns on a ship passing through the Suez Canal, the global shipping artery that runs through Egyptian territory.

During Saturday’s unsuccessful attack, the Panamanian-registered container ship COSCO ASIA came under fire in a northern section of the canal, the source said. Canal Authority sources said a rocket-propelled grenade was also used.

The Brotherhood says it is committed to peaceful resistance. It managed to bring thousands into the street last Friday in demonstrations against what it views as a “putschist regime” that aims to turn Egypt back into a police state.

The government says it will restore democracy with parliamentary and presidential elections once amendments to the constitution are approved in a referendum.

The presidency named a 50-member panel that will review an extensive set of amendments drawn up by a “panel of experts”.

The proposals would remove Islamic-influenced articles including one that gave Muslim scholars a say over some affairs of state, and also lift a ban on some Mubarak-era officials assuming public office.

Drawn up by a 10-member “committee of experts” appointed by decree, the draft preserves the privileged status of the military, which it effectively shields from civilian oversight.

Although Islamists won five popular votes held since 2011, the constituent assembly will have only two Islamists among its members. One belongs to the hardline Salafi Nour party, the other is a former Brotherhood leader now harshly critical of the group he left last year.

“It’s a very establishment list,” said Nathan Brown, an expert on Egypt based at George Washington University in the United States.

The presidency said six Islamist parties, including the Brotherhood’s Freedom and Justice Party, had been approached to fill the two seats set aside for Islamists. Only Nour had responded. The Brotherhood says it wants nothing to do with the army’s plans for Egypt.

The Brotherhood and the Nour Party secured a major say over the last constitution-drafting process by winning some 70 percent of the seats in parliamentary elections held after Mubarak’s downfall.

Critics said the Islamists then sidelined other groups in a process that failed to reflect Egypt’s diversity. The constitution was signed into law last December by Mursi after being approved in a referendum.

The Nour Party complained of a “disregard and exclusion of the Islamist current” in the make-up of the review panel.

Nour, which was founded after Mubarak’s fall, noted that the committee left out members of the youth movements that ignited the uprising of Jan. 25, 2011, “raising doubts about the panel’s position towards the revolution”. DM

Photo: A supporter of ousted Egyptian President Mohamed Mursi makes the “Rabaa” or “Four” gesture during clashes at Mohandiseen in Cairo August 30, 2013. Thousands of supporters of Mursi marched through districts of Cairo and other cities on Friday to demand his reinstatement, ignoring warnings that security forces would open fire if protests turned violent. REUTERS/Louafi Larbi