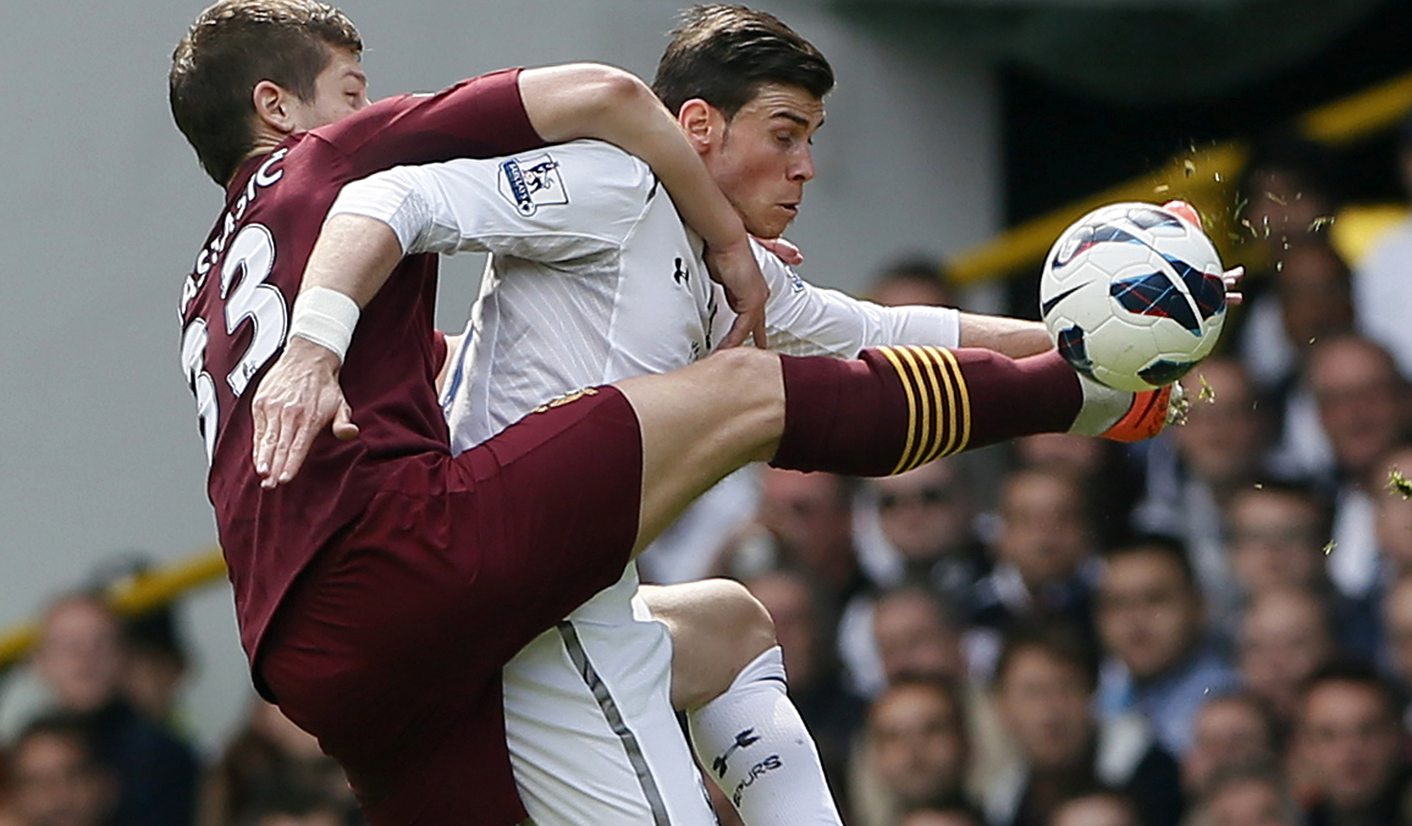 To the relief of almost everyone involved, Spurs, Real Madrid, the player and Tottenham chairman Daniel Levy issued statements saying the deal for the Wales international was done, with just the formality of a medical in Madrid to come on Monday, transfer deadline day.

The fee eclipses the previous record of 94 million euros that Real paid for Cristiano Ronaldo from Manchester United in 2009 and for that money the Spanish aristocrats are buying an outstanding young player who won games for Spurs almost single-handedly last season.

It also confirms yet again that when Real target a player they normally sign him, even if the other club are reluctant to sell, as Spurs steadfastly were.

Tottenham manager Andre Villas-Boas was the first to announce that Bale, 24, was leaving when he spoke to reporters after his team’s 1-0 Premier League defeat in the north London derby to arch-rivals Arsenal at the Emirates Stadium.

Bale has not played in any of Spurs’ five opening Premier League or Europa League matches this season due to what was described as an ankle injury.

He last played for the club in an early pre-season friendly, scoring in a 1-1 draw at Swindon Town in July.

“He is an absolutely wonderful player. He is going to join Real Madrid and he has left us with great memories from last season which every Tottenham fan cherishes. He has moved on and we have moved on as well,” Villas-Boas said.

“We have to move forwards. Tottenham has made some great investments in the money that will come from Gareth Bale, which is wonderful.”

Spurs have not been slow to re-invest the money, breaking their own transfer record three times in this window with the acquisitions of Paulinho from Corinthians in Brazil for 17 million pounds ($26.30 million), followed by Roberto Soldado from Valencia for 26 million pounds then Erik Lamela from AS Roma for 30 million on Friday.

They have also signed Nacer Chadli from Twente Enschede, Christian Eriksen from Ajax Amsterdam, Etienne Capoue from Toulouse and Vlad Chiriches from Steaua Bucharest, taking their total outlay to around 110 million pounds as they bid to challenge for the title and seal a top-four finish.

The departing Bale will be hard to replace and in a statement issued on the Spurs website (www.tottenhamhotspur.co.uk), the player said the English club had helped make him the player he was today and it would always remain in his heart.

“I have had six very happy years at Tottenham but it’s the right time to say goodbye. We’ve had some special times together over the years and I’ve loved every minute of it,” he said.

“I would like to thank everyone at the club, the chairman, board, staff, coaches and players – and most of all the fantastic fans who I hope will understand this amazing career opportunity.”

He added that he was not sure there was ever a good time to leave a club where he felt settled was playing the best football of his career.

“I know many players talk of their desire to join the club of their boyhood dreams, but I can honestly say, this is my dream come true,” he said.

“I am well aware that I would not be at the level I am today were it not for firstly Southampton and then Spurs standing by me during some of the tougher times and affording me the environment and support they have.

“Tottenham will always be in my heart and I’m sure that this season will be a successful one for them. I am now looking forward to the next exciting chapter in my life, playing football for Real Madrid.”

Real Madrid confirmed the powerful-running attacking-midfielder-cum-forward had signed a six-year deal and would have a medical on Monday before being presented to the media.

Spurs chairman Daniel Levy also issued a statement saying the club did not want to sell him but in the end they had no option.

He will join former Tottenham colleague Luka Modric at Real Madrid after the Croatian joined Real a year ago. DM