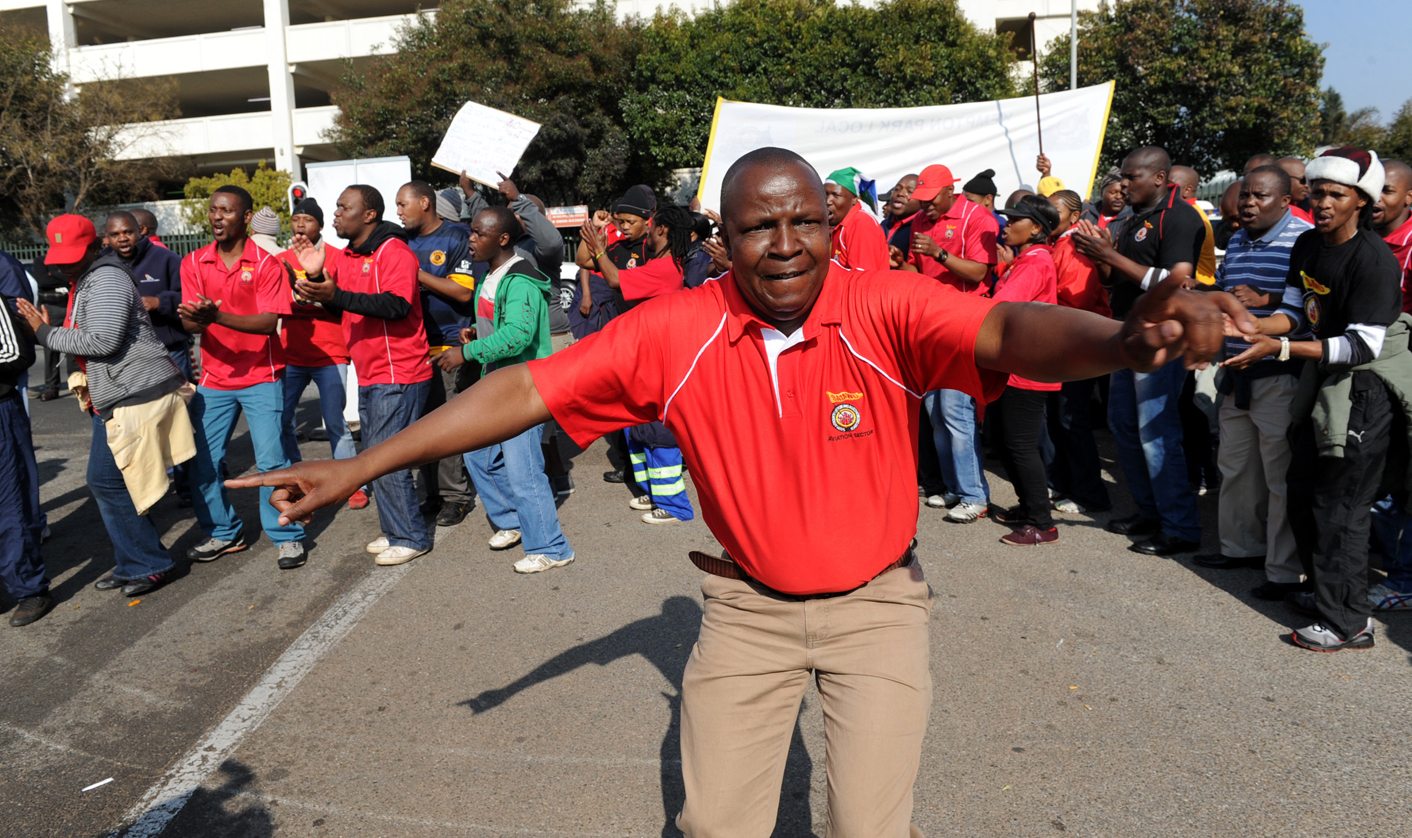 Strike season seems more predictable than the weather patterns. Here it is once again, affecting construction, car manufacturing, gold, textiles and clothing, and fuel retailers. GREG NICOLSON offers an overview and asks what can be done to change the climate of distrust in the long-term.

Technicians from the South African Transport and Allied Workers Union (Satawu) members working at South African Airways went on strike on Monday after the airline refused to add a 0.4% once off payment to its offer of 6.5%. Speaking to media, Satawu general secretary Zenzo Mahlangu said the union now wants a double-digit pay increase and until that demand is met the union will continue to delay flights.

In the construction industry, 140,000 workers embarked on industrial action on Monday, affecting 50% of civil engineering firms in SA’s contract industry. After the Commission for Conciliation, Mediation and Arbitration (CCMA) failed to resolve the dispute, 90,000 National Union of Mine Workers (NUM) members and 50,000 Building, Construction and Allied Workers Union (BCAWU) members went on strike for a 13% increase in 2013 and 14% in 2014. The SA Federation of Civil Engineering Contractors considers the demands  “unreasonable and unaffordable” but remains confident a settlement can be reached through negotiation.

Numsa’s strike in the car manufacturing industry will continue until at least Wednesday night. Shop stewards held a special meeting on Tuesday to discuss the industrial action of 30,000 employees that has crippled the auto industry, which is in turn responsible for 5% of the nation’s GDP. Today, the union’s national leadership will consider its shop stewards’ views and decide whether to accept the Automobile Manufacturers Employers’ Organisation’s (AMEO) revised offer of 10%. Numsa embarked on industrial action 10 days ago demanding a 14% annual wage hike, a housing subsidy and transport allowance. “We refuse to be treated like cheap labourers, amidst the triple crisis of poverty, unemployment and inequality faced by workers in our country. As workers we deserve better wages in the interest of our children and youth who are at the receiving end of the capitalist brutality and barbarity,” it said at the outset of the industrial action, which is estimated to cost the country as much as R700-million a day.

NUM members in the gold sector have voted to go on strike if their demands, of over 50% increases in some cases, aren’t met by Friday. The NUM, along with the United Association of South Africa (Uasa), have left discussions with the Chamber of Mines while the Association of Mineworkers and Construction Union (AMCU), which is asking for increases as high as 150%, and Solidarity are still engaging. Gold producers have offered 6%. The NUM is convinced that companies are using the threat of retrenchments to force workers to take lower wages.

Numsa members also plan to walk off the job in the fuel retailing industry on Monday. The union has 72,000 members in petrol stations and workshops who will go on strike. They want an increase of hourly and monthly rates as well as better pay for afternoon and night shifts. Meanwhile, the South African Clothing and Textile Workers’ Union (Sactawu) has delayed a strike while they consult members.

Sound familiar? A combination of promises and poor growth has trapped SA in a continued cycle of industrial action. GDP for the second quarter of 2013 rose by an annualised 3%, but industrial action has still been reported as a key concern harming business and consumer confidence. A recent SA Chamber of Commerce and Industry (SACCI) survey of around 50 of its members found in over 60% of instances strikes temporarily reduce output or services to clients, while 30% of businesses experienced a permanent increase in costs. Chief among the respondents were small and medium businesses.

Cosatu spokesman Patrick Craven says behind the ongoing strikes are high levels of inequality and a decline in labour’s net share of wealth combined with higher costs of living for the poor. “I don’t think (the frequency of strikes) has changed over the last few years but the nature has changed,” said Craven. Workers are angry and frustrated by their situation and are demanding action from below instead of following union leadership.

Neren Rau, CEO of SACCI, agreed that inequality remains a key reason for strikes. Historically related disparities remain in South Africa and people are angry that some of the bread and butter promises of democracy have not materialised. “It’s the economy that has let us down, firstly, and then some of our policy decisions,” said Rau over the phone on Tuesday. The union environment is highly politicized with competing unions having to make high demands and be willing to go on strike or risk losing members, he added.

The Department of Labour’s chief director of labour relations Thembinkosi Mkalipi wanted to add that all of the current strikes are legal. To confront the ongoing strikes, he said companies could be more transparent in their finances so that workers understand when employers cannot afford a pay rise.

Mkalipi said the Labour Relations Amendment Bill is not aimed at stopping strikes but reducing violent industrial action. Craven doubted the bill would have an influence, while Rau said the cut clause on consulting members before strike action could promote more wildcat strikes.

The key, however, to lowering strike action comes back to the economy. Craven said, “Obviously you have to pay workers better wages and improve working conditions,” suggesting minimum wage proposals could help curtail the problem.

Rau, despite his position representing business, essentially agreed: “I think a key issue around normalcy around the issue is sufficient levels of economic activity to reduce inequality”.

Reducing the effect of industrial action will require a hard look at South Africa’s economy. If inequality can’t be reduced, the strikes will remain the workers’ weapon of choice. DM