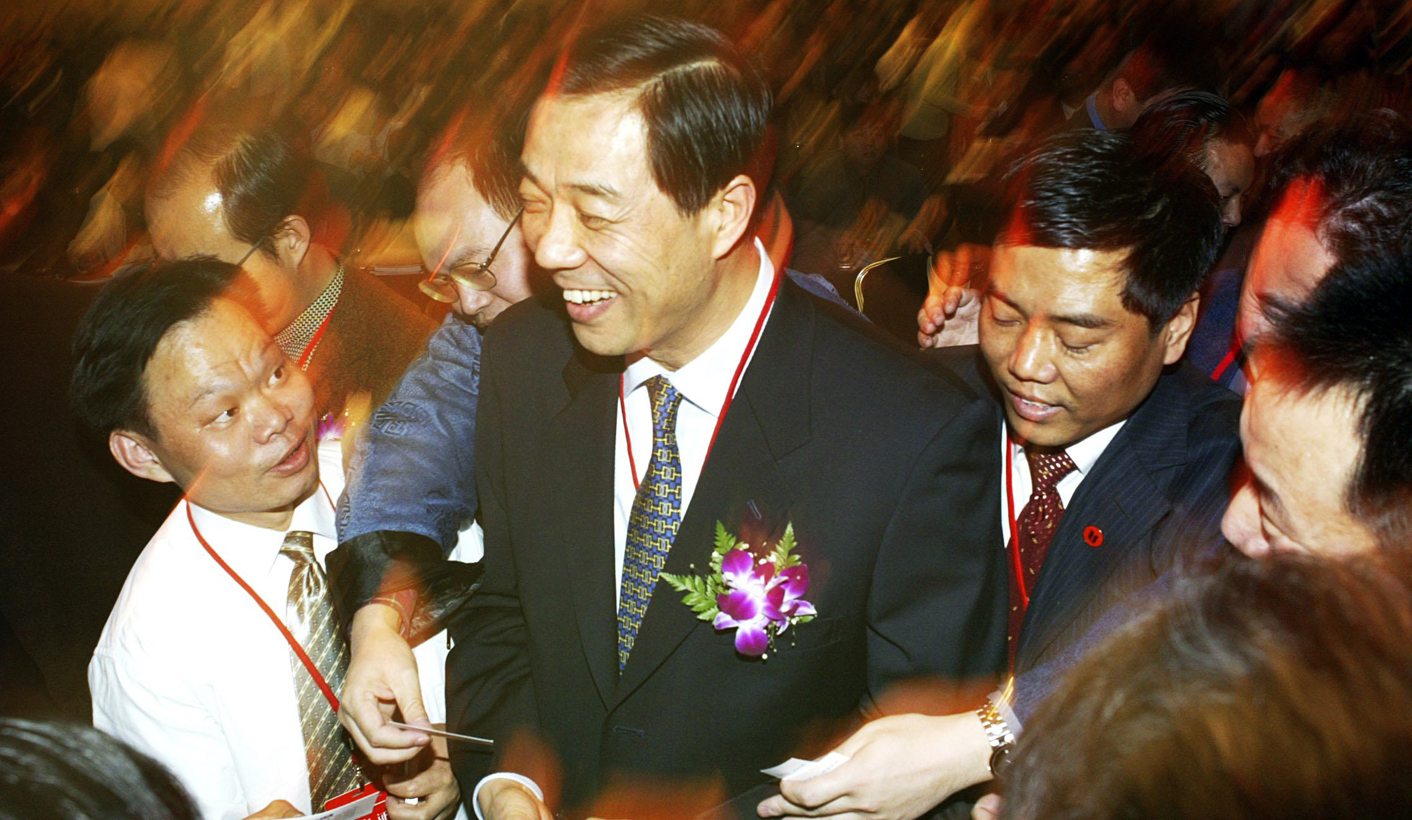 South Africa’s favourite snack made a most unlikely cameo appearance at the trial of Bo Xilai, the biggest political trial in China for decades. The disgraced princeling and his family lived on biltong for a month, apparently, and this was evidence for the prosecution of just how luxuriously corrupt their lives had become. Because, obviously, nothing says you’ve made it like a pack of chilli bites. By SIMON ALLISON.

Surely upstaging the trigger-happy Paralympian is Bo Xilai, the disgraced Chinese politician whose court proceedings drew to a close this week. His trial can match Pistorius on most counts – there’s murder, sex and a precipitous fall from grace – as well as adding a few unique twists of its own: corruption, power and a rare insight into the inner working of the Chinese state. Oh, and biltong. As we South Africans know, there are few things biltong can’t improve.

Before his fall, Bo Xilai was part of China’s political aristocracy. He was the son of one of the “Eight Immortals” of China’s communist revolution, a young princeling destined from birth for a seat at the Politburo and a portfolio of high-profile commands. He made good on his early promise, taking charge of several big cities and whipping them into shape. Unusually in China, he is charismatic and vocal, and was tapping into Mao’s legacy to build an influential (but ultimately dangerous) cult of personality around his person.

And then it all came tumbling down. Two bizarre incidents – the mysterious murder of a British businessman and a failed attempt to seek asylum at the US embassy from one of Bo’s top lieutenants – unravelled a web of corruption, with Bo Xilai allegedly at its centre. The bigwigs in Beijing, already scared of Bo’s populist appeal, didn’t need to be asked twice. He was arrested and charged with corruption, taking bribes and abuse of office.

His trial began on Thursday last week, gripping more than a billion Chinese as well as a massive global audience. Anyone expecting a show trial (nearly everyone, that is) got more than they bargained for, with Bo Xilai defiantly representing himself, denying all charges and vigorously cross-examining witnesses. In another unexpected twist, much of the trial was publicised, published as it happened on the court’s microblog. As Time magazine noted: “If there’s one lesson to be drawn from the salacious, five-day trial of fallen Chinese princeling-politician Bo Xilai, it’s this: the Chinese government gets this whole Internet thing.”

The revelations and accusations flowed thick and fast. Many centred on the jet-set life of Bo’s son, Bo Guagua, who rode around town on Segways, hired private planes and thought nothing of flying 40 of his Harvard classmates across for an all-expenses-paid trip to Beijing. Proving Bo junior’s profligacy is key for the prosecution, because it illustrates the kind of silly money that was floating around the family, money that could not have come from Bo senior’s state salary.

One revelation which captivated audiences was the story of the “mystery meat” which Bo Guagua brought back with him from a trip to Africa (apparently his itinerary included Kenya and Tanzania). Gu Kailai, Bo Xilai’s estranged wife – estranged because they were both having affairs, and she has pled guilty to poisoning that British businessman – said that their son had returned from holiday with a big hunk of raw meat from some rare species that she can’t remember.

“Guagua said it could be eaten raw, but Bo Xilai said it needed to be cooked. That made Guagua mad, and he said it was very expensive and that preparing it like that would spoil it,” said Gu Kailai. In the end, the father prevailed, and the meat was steamed. “We ate this meat for a whole month.”

For a while, the “mystery meat” puzzled Chinese foodies, but eventually they figured out that if it’s raw, and it’s from Africa, it’s probably biltong. In which case Bo Xilai’s son was exactly right: cooking it kind of misses the point.

Biltong has been a hit with Chinese visitors to South Africa, who aren’t afraid to explore the more weird and wonderful aspects of global cuisine. Lawrence Emmett, butchery manager of the Butcher Shop & Grill, told the Wall Street Journal that the South African specialty was popular with his Chinese customers, especially the chilli varieties.

With Bo Xilai’s high-profile celebrity endorsement, South Africa can expect even more Chinese interest in biltong. Enterprising vendors on Chinese websites are already offering customers a taste of “Guagua’s African meat”, although it’s unlikely to be the real thing.

Not that any of this helps Bo Xilai. His days of living high on champagne and biltong are well and truly behind him. His vociferous denials notwithstanding, the trial closed on Monday with a guilty verdict all but certain, and only the severity of the sentence still at stake. Just like that “mystery meat”, Bo Xilai’s been hung out to dry by a Chinese government looking to set a very public example against corruption, and to protect themselves from his potentially disruptive charisma. DM

Photo: Bo Xilai (C), then Governor of Liaoning Province, is surrounded by delegates during the China Entrepreneur Annual Meeting 2003 in Beijing in this December 7, 2003 file photo. REUTERS/Jason Lee/Files