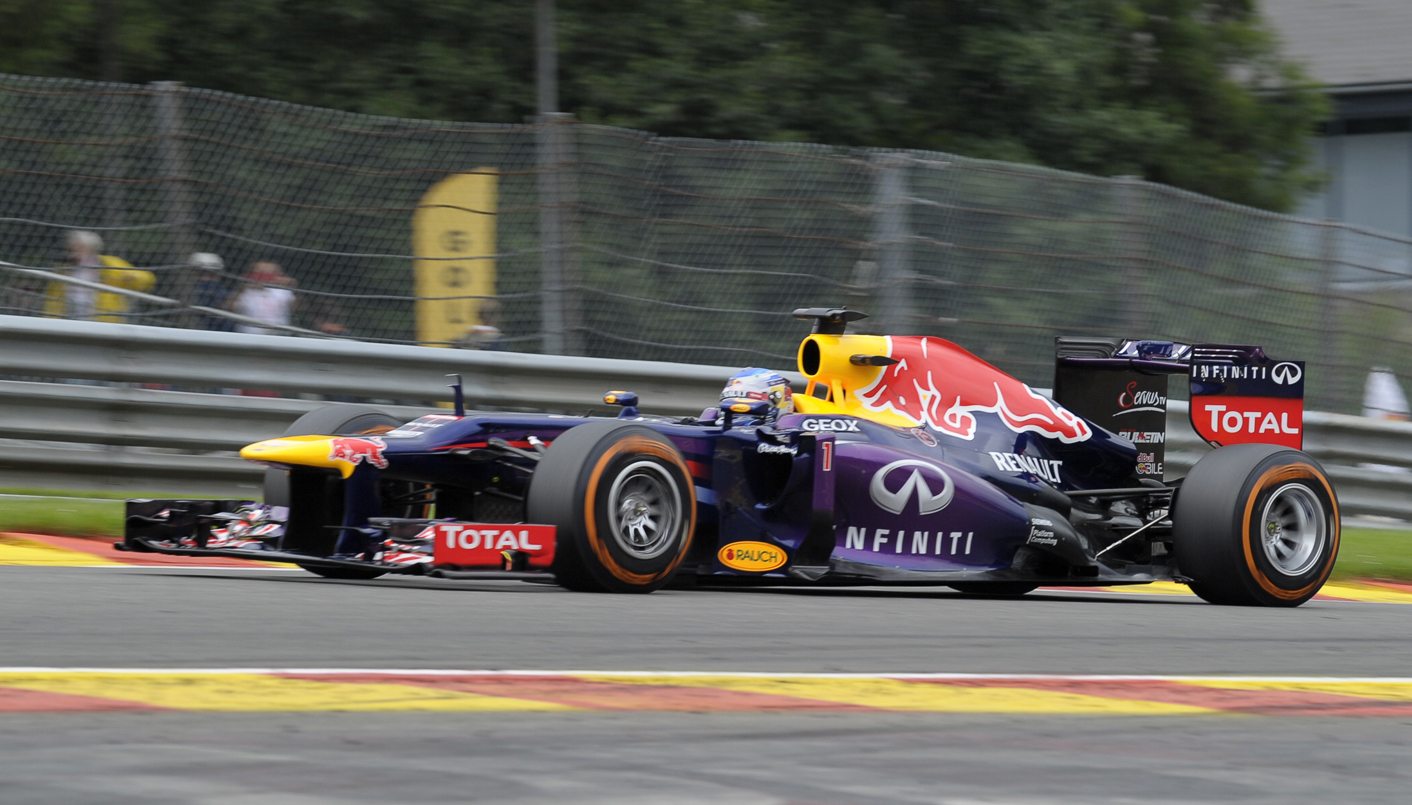 Formula One world champion Sebastian Vettel stamped his authority on a processional Belgian Grand Prix on Sunday to chalk up his fifth win in 11 races and stretch his overall lead to 46 points. By Alan Baldwin.

Vettel seized the lead from Mercedes’ pole-sitter Lewis Hamilton on the Kemmel straight after Eau Rouge and never looked back while threatened rain held off. The German now has 197 points to Alonso’s 151.

“It was a fantastic race for us from start to finish really,” he said after his 31st career win.

Britain’s Lewis Hamilton, winner of the previous race in Hungary and on pole for the fourth race in a row, took third place for Mercedes ahead of team mate Nico Rosberg and moved up to third overall on 139.

Kimi Raikkonen’s run of 27 successive races in the points came to an end with the first retirement since his comeback last year.

The Finn had started the day second in the championship but fell to fourth overall with 134 points after pulling into the pits and stopping with what looked like a brake problem.

The race, on one of the fastest and most challenging circuits on the calendar, was no thriller and the outcome proved a disappointment for those fans who had hoped to see Vettel slowed on his march to a fourth successive title.

“Today it was a little bit boring, we get second place but no threat to Sebastian Vettel and had no threat from behind,” said Alonso, whose team’s home Italian Grand Prix is next up.

“It is an important weekend for us and the team and we arrived fully motivated and in Monza we would like to give some smiles to our fans.”

There were boos from the crowd mixed with the cheers as drivers stood on the podium after the race, although reports suggested that may have been directed at protesters trying to interrupt.

Greenpeace activists demonstrating against race sponsor Shell had unfurled a banner from the roof of the main grandstand, opposite the VIP area, before the race as teams readied their cars.

They then remained hanging from ropes, watching the action.

“We are a bit confused here because the crowd are booing and cheering and I’m not sure why,” Vettel told the crowd after spraying the champagne.

The start was uneventful after last year’s mayhem, when Lotus’s Romain Grosjean took out Alonso and Hamilton at the first corner in an accident that brought the Frenchman a one race ban.

Hopes that Hamilton could hold off Vettel were short-lived.

“He (Vettel) had the momentum and was able to go around Lewis and that was the decisive moment,” said Red Bull principal Christian Horner.

“There’s still a long way to go but it was a dominant performance from Seb, perfect display by the team with pit stops and strategy.”

Australian Mark Webber was fifth for Red Bull after a poor start in his last Belgian Grand Prix with McLaren’s Jenson Button, last year’s winner, sixth after leading early on when those ahead pitted and he stayed out.

Ferrari’s Felipe Massa was seventh, Grosjean eighth and Force India’s Adrian Sutil ninth despite being caught in a clash with the Williams of Venezuelan Pastor Maldonado that took out his team mate Paul di Resta.

Australian Daniel Ricciardo, frontrunner to replace Webber at Red Bull next season, climbed through the field from 19th at the start to take the final point and further burnish his credentials. DM