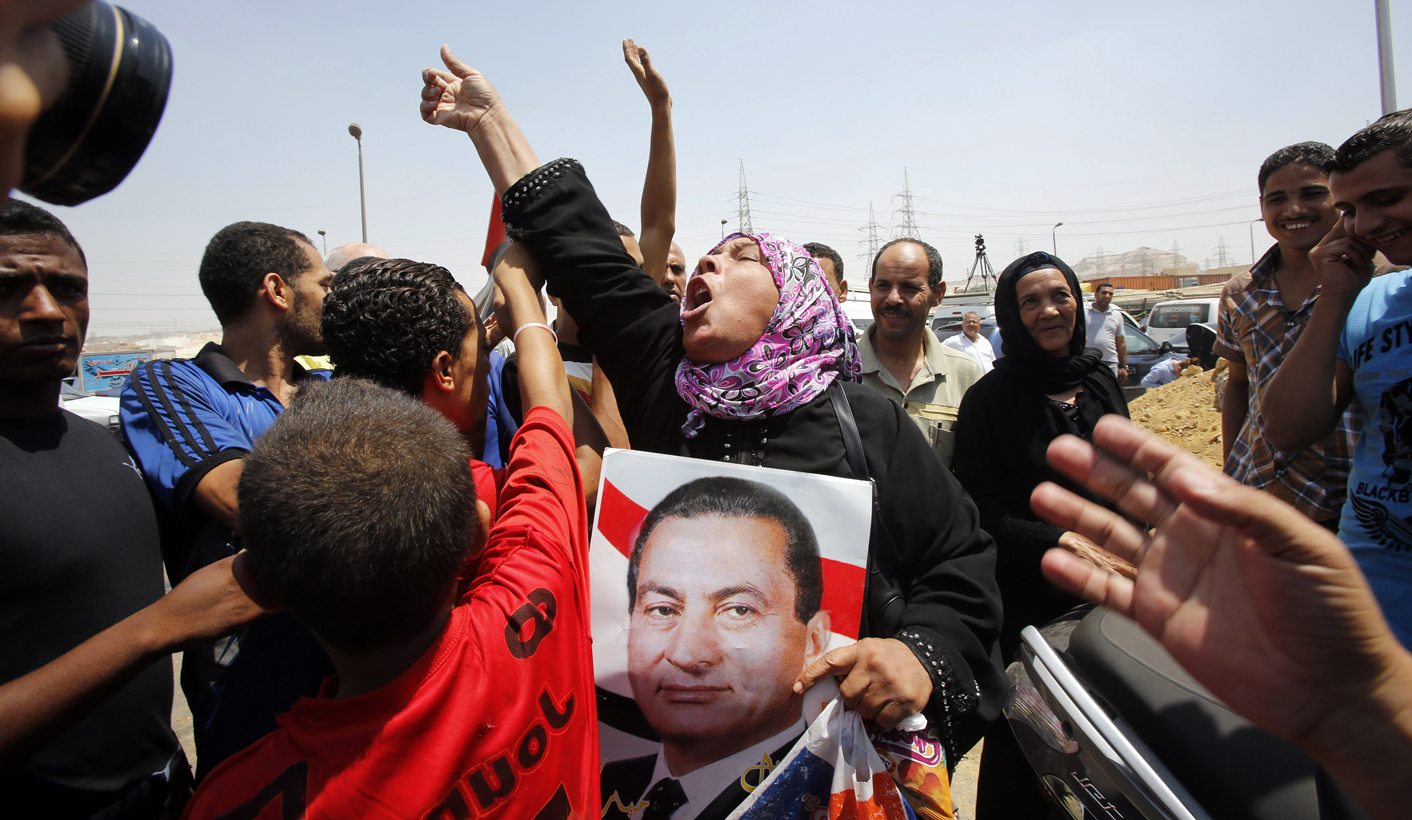 Egypt's former autocrat Hosni Mubarak was flown from jail on Thursday in a symbolic victory for an army-dominated old order that has overthrown and imprisoned his freely elected Islamist successor. By Maggie Fick and Tom Perry.

A blue-and-white helicopter took Mubarak from Cairo’s Tora prison, where scores of his supporters had gathered to hail his release. He was flown to a military hospital in the nearby southern suburb of Maadi, officials said.

“He protected the country,” said Lobna Mohamed, a housewife in the crowd of Mubarak well-wishers. “He is a good man, but we want (Abdel Fattah) Sisi now,” she said, referring to the army commander who overthrew Islamist Mohamed Mursi on July 3.

For Mubarak’s enemies, the moment marked a reversal of the Jan. 2011 pro-democracy uprising that brought him down after three decades in power as one of the pillars of authoritarian rule in the Middle East.

But some Egyptians, many of whom have rallied behind the army’s decision to depose Mursi, expressed fondness for the 85-year-old former air force commander whose tight grip on power brought stability.

Judicial authorities had ordered Mubarak’s release from Tora. His lawyer and other sources said earlier that his first destination would be an upscale hospital northeast of Cairo.

The prime minister’s office has said Mubarak will be placed under house arrest.

That decision was made under a month-long state of emergency declared last week when police stormed protest camps set up in Cairo by deposed leader Mursi’s Muslim Brotherhood to call for his reinstatement.

According to official sources, about 900 people, including some 100 soldiers and police, have been killed in violence across Egypt since then, making it the bloodiest bout of internal strife in the country’s modern history as a republic. The Brotherhood says the toll is even higher. Most of the victims were gunned down by security forces.

In the latest violence, gunmen in a car killed an army major and a soldier near the Suez Canal city of Ismailia, security sources said. Two soldiers were wounded. The assailants escaped.

“He should stay in prison. The country is facing obstacles so people are turning back to Mubarak. They don’t know what they are doing,” said Hoda Saleh, a fully veiled woman who was leaving Tora, where her brother is an inmate.

To outsiders who watch Egypt, the symbolism was powerful.

“This is the end. Mubarak will never be an important political player, but symbolically, it’s a victory dance by the reconstituted old state under the leadership of the Supreme Council of the Armed Forces,” said Joshua Stacher, an Egypt expert at Kent State University in the United States.

Mubarak was sentenced to life in prison last year for failing to prevent the killing of demonstrators. But a court accepted his appeal earlier this year and ordered a retrial in the case, for which he has already served the maximum amount of pretrial detention. Mubarak was arrested in April, 2011.

This week, two court rulings in separate corruption cases removed the last legal grounds for his continued detention, although he will not be allowed to leave Egypt and his assets remain frozen.

At the Maadi hospital where he was taken, there were few signs of extra security for Mubarak apart from three police cars parked around the corner. Soldiers guarded the main gate, across a tree-lined boulevard from a Nile restaurant and boat club.

Patients and visitors on foot and in cars came and went from the white- and green-painted medical complex which resembles a beach hotel, with palm trees and landscaped gardens.

At the prison he left behind, Mohamed Hussein, a 36-year-old jobless man waiting outside to visit a jailed relative, said: “We love Mubarak.” His sister Fatheya chimed in: “Isn’t it enough that for 30 years he did not drag us into a war, and let us live in dignity?”

A brief commotion occurred when the daughter of a jailed Brotherhood leader, Khairat al-Shater, berated journalists awaiting Mubarak’s release. “Why are you waiting for Mubarak?” Khadija al-Shater asked. “We Islamists are in jail in there.”

As several Egyptian journalists shouted at her to answer for the deaths of police officers in the unrest, she said she had been denied access to her imprisoned father. Asked if he had seen a lawyer, she told Reuters: “His lawyer is in jail.”

Mubarak’s release plays into the Brotherhood’s argument that the military is trying to rehabilitate the old order. The army-installed government casts its conflict with the Islamist movement as a life-or-death struggle against terrorism.

Political upheaval has gripped Egypt since Mursi’s removal by the army on July 3, just over a year after he was elected.

The military’s declared plan for a return to democracy has yet to calm the most populous Arab nation, where security forces impose a nightly curfew as they hunt down Brotherhood leaders.

The clampdown appears to have weakened the Arab world’s oldest and arguably most influential Islamist group, which won five successive votes in Egypt in the two and a half years since Mubarak fell.

The Brotherhood’s ability to stage pro-Mursi demonstrations has faded in the past few days. One of its spokesmen, Ahmed Aref, was arrested on Thursday, the state news agency reported.

Brotherhood supporters have nevertheless called on Egyptians to hold marches on the weekly Muslim prayer day, billed as a “Friday of Martyrs”, against the army takeover.

A pro-Mursi alliance called the National Coalition to Support Legitimacy said in a statement: “We will remain steadfast on the road to defeating the military coup.”

Alarmed by the bloodshed, the United States and European Union are reviewing their aid to Cairo. Saudi Arabia, a foe of the Brotherhood, has promised to cover any shortfall. It and other rich Gulf Arab states have already pledged $12 billion since Mursi’s fall.

EU foreign ministers stopped short of agreeing immediate cuts in aid to Egypt on Wednesday, in part because of concern that doing so could damage any future EU mediation effort.

An EU attempt to broker a compromise collapsed before security forces cleared out the Brotherhood protest camps.

James Moran, the bloc’s ambassador in the Egyptian capital, described reconciliation prospects as a huge challenge.

“Passions are high, emotions are high. Things have to cool off a little bit,” he said, skirting a question on whether the Brotherhood is committed to terrorism, as state media contend.

“It would be good if this is not all painted one colour. There may be different strains of opinion within the Islamist movement,” he said. “One thing is for sure – the Islamist constituency is there, and you are going to have to find a way somehow of living with it.”

The government has bristled at foreign attempts to use aid or persuasion to nudge it to seek a political compromise. DM

Photo: A supporter of former president Hosni Mubarak holds his poster to celebrate as she waits for his release in front of the main gate of Tora prison on the outskirts of Cairo August 22, 2013. REUTERS/Youssef Boudlal