Who's afraid of an Economic Freedom Fighter? 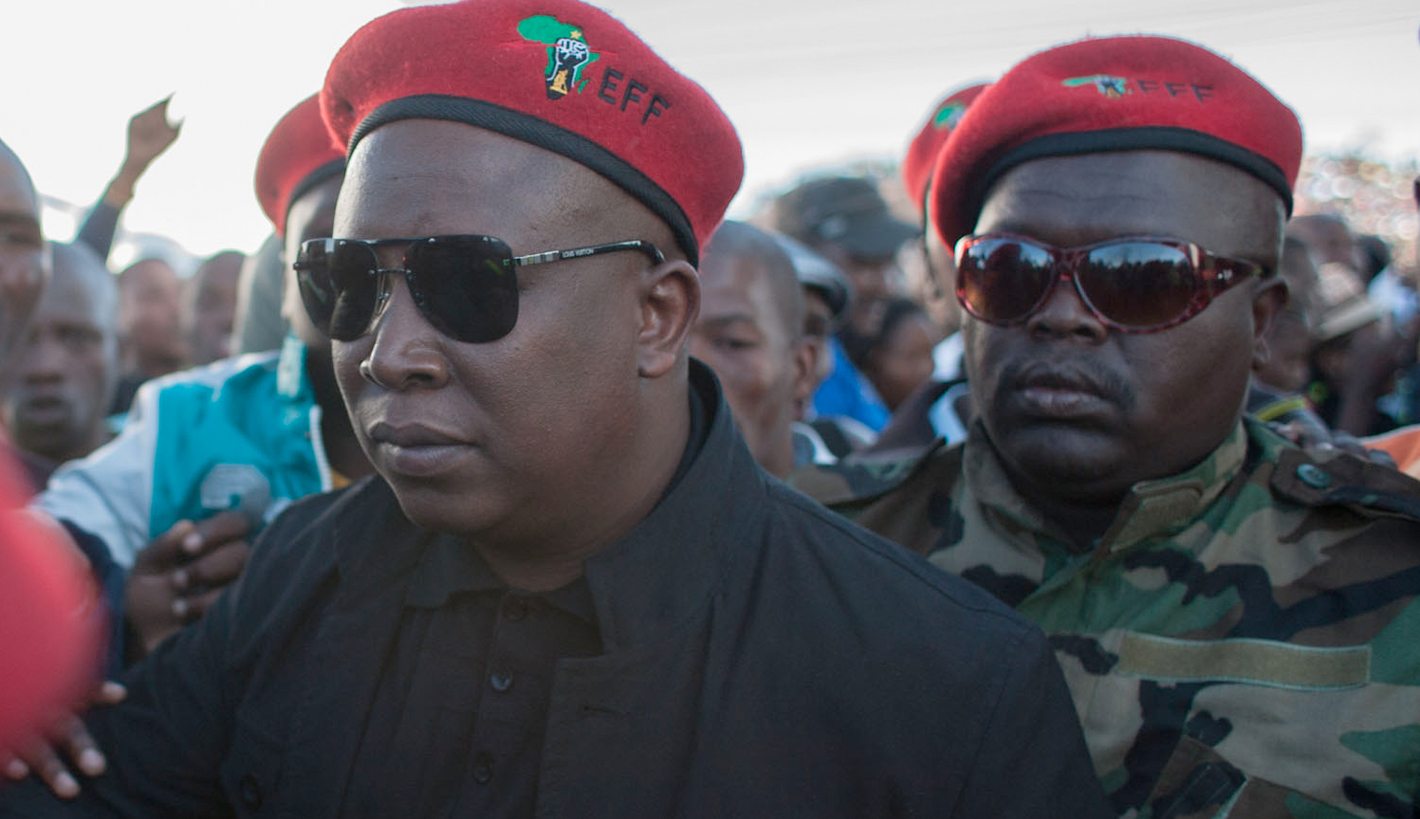 Fear plays a big part in South African politics. Don’t vote for him, he’s corrupt and will steal your money. Don’t vote for her, she’ll bring back Apartheid. And whatever you do, don’t for a second consider investing here, or buying that farm or even opening a bank account because Julius Malema will come along and take it. It’s time to stop the stupid worrying. We can’t speak for him or her, but we’re pretty certain about Julius. It’s not going to happen. He is not going to make a huge impact on the elections. And he is not the Adolf Hitler of SA politics. Here’s why. By STEPHEN GROOTES.

It’s maddening. First, wherever I went, I was asked what Young Julius was really like in person. That was when he was slight. As he grew stout, I was asked if I thought he would really run the country. Then, as things progressed, I was asked, often, how I managed to sit still when he spoke, and didn’t feel the urge to commit physical violence. As he was shoved out of the window by the ANC, some people started to feel sympathy: wasn’t Jacob Zuma playing with fire they asked? And now, the question is all about will he somehow rise magically from the ashes of his tragically ill-judged political career and show us all, and by us I mean Jacob in particular, that they were wrong?

He won’t. He cannot. It’s not going to happen.

There are a few reasons, many of them to do with Malema’s personality, but let’s start with context first. Malema is starting a new party, something that not only didn’t exist during the last elections, it actually didn’t even exist this past January. So there’s a lot of running around and organising that needs to be done. A lot of old-fashioned hard work. And there simply hasn’t been, and won’t be, the time for it. (This doesn’t just apply to Malema by the way; it also applies to AgangSA and the Workers and Socialism Party.)

To get going in an election, you need momentum. You need to get things going. You need name-recognition. You need leaders who are known and trusted. And you need a good old-fashioned enemy.

By the time the 2009 elections came around, Cope had actually been around in some shape or form, though flying below the public’s radar, for some time. And it had leaders who were well experienced in marshalling the troops, organising, filling halls and that sort of thing. Hell, Mbhazima Shilowa was general secretary of Cosatu, for goodness sake.

In this case, time is simply not on young Julius’s side.

The second problem is resources. Where will the money come from? And let’s not kid around. Winning votes is not just about a few million here and there; it’s in a completely different league nowadays. There’s a reason the ANC is always looking for money. Elections are an expensive game and you can only play if you have a sustainable source of income. Now that the Limpopo provincial government is closed to him, Malema has lost his main supply line.

But enough with the context and on to the real reason why Julius is not going to be president. It’s about personality and structure. Parties that actually do well have a structure. They can be seen as organised around one person, such as the Nazi Party in the 30s and 40s, but in reality they have many powerful people doing their massive preparatory job, albeit sometimes in the shadow of the big leader. A successful structure must have several big brains working together, and an entire army of foot soldiers to get things done. One person has to work on the marketing, another has to take charge of your black-shirts, and someone has to make sure Nuremberg is actually available on the night you want it.

Malema has none of that. He can’t even keep a nightclub owner interested in his party. He is actually trying to start something from scratch, to get it going from nothing.

Let’s take a brief look at his history with this sort of thing. When he took over the ANC Youth League in 2008 it actually had a structure, was running provinces and regions, the whole bit. And don’t forget, he’d taken it over from his best mate Fikile Mbalula, so it’s not like he had to make radical changes. One hate speech conviction, three suspensions and an expulsion later and you have a Youth League that was nearly declared officially bankrupt by the courts. When Julius was finally shown the window at Luthuli House, just about all the provinces had been officially disbanded by his leadership. This was mainly because they were led by people who did the one thing Julius cannot abide: thinking for themselves.

To lead an organisation takes at least three things, by the bucket load. You need confidence, brains, and EQ. Think Gwede Mantashe. He has all three. So, in a different form, does Zuma. Massively. Malema? Ah, not so much. His mode of showing displeasure is to push and shove, and shout and scream until the person just can’t take it anymore.

What you really need to be able to do, especially in the early days, is to get people together and lead them, often more democratically than you would like, in the same direction. It takes patience. And that’s a virtue we haven’t yet come across in our young friend.

And then, of course, there is the other, rather large elephant in the room when it comes to Malema: that corruption trial. It is going ahead, albeit at the usual pace of these things. And when you look at the amount of work and effort that’s been put in by the Hawks etc., you come to two conclusions. One, they don’t seem to do that for every crime, and two, they’re bound to find something to nail him on.

Malema, of course, knows this. And he realises he’s out of legal options. And so he’s doing what he always does – he’s politicising the entire issue. He’s looking for a way to shout “political conspiracy” and claim it’s all a dastardly Young Communist League plot.

In the final analysis, the motivation for starting the Economic Freedom Fighters in the first place was not in fact political. It was not to win power and change the country. It was simply the most political defence of a criminal trial ever mounted in South African history. DM