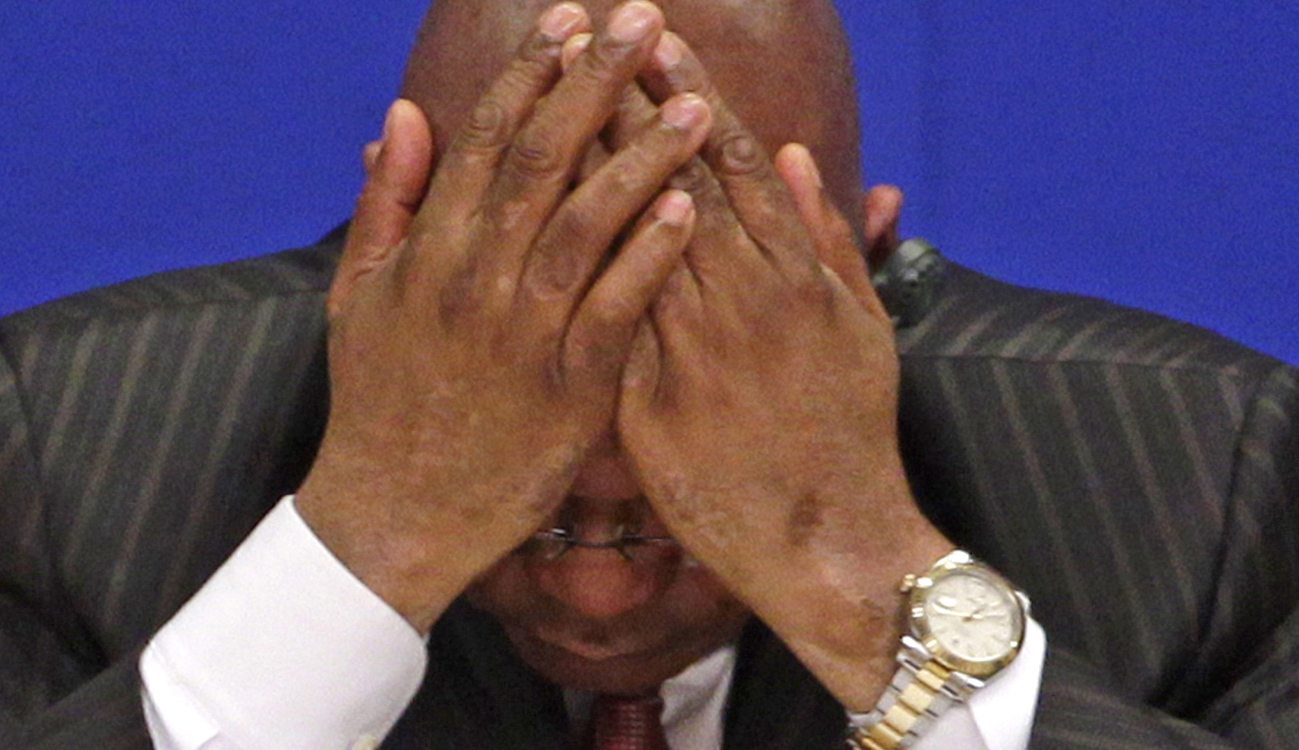 Trying to make sense of the Zuma spy tapes saga, the undying political scandal that is as awful as it is complicated? You’re not alone. By RICHARD POPLAK.

The following is excised from a Wikipedia entry:

The Appeal is a work attributed to an unnamed South African legal clerk in who died in a Karoo sanatorium before completing the text. The manuscript is widely believed that to be his attempt to come to terms with the so-called Jacob Zuma “spy tapes scandal”, but scholars have yet to confirm this hypothesis. However, the book, which runs 42,000 pages, is clearly the work of a tortured mind, one brought to the edge of sanity by the convoluted machinations of a legal system on the brink of all-out farce. There is some scholarly evidence to suggest that the text is intended to be satirical, but we assure you—no one here is laughing.

The Appeal appeared in Esquire Magazine’s “Top 20 Books That Will Make You Want to Kill Yourself”, and Phillip Roth wrote that, “[the book] makes American Pastoral read like American Pie”. When it was first published, Dwight Garner, reviewing it for the Books of the Times, insisted that it was “like washing a meal of glass shards down with a flagon of petroleum.” The Guardian called it “a fucking slog. But then again, so is life.” To give you some idea of what we’re dealing with here, Dwayne “The Rock” Johnson was unable to bench press more than three reps of the Penguin Classics edition. In a lengthy review for Vice Magazine, JM Coetzee wrote some stuff about it that no one understood.

Z, a cheerful cadre member much beloved by the people of his region, harbours ambitions far grander than his intellect can bear, and wiles greater far than his foes could ever hope for.

Z wishes to preside over his homeland as President, but the duplicitous M—currently holding the position—wishes to bar his way. Z is also financially entwined with the snakelike S, a relationship characterised by the vast, dysfunctional legal bureaucracy as “corrupt”.

While the land is described a “democracy” on paper, the presidency is actually decided by vicious infighting at looming Congress, to which only members of the ruling Party are invited. M hopes to retain the Presidency, which seems likely given that Z has bedded a woman who significantly regrets the encounter, to say nothing of the raft of corruption charges that are impugning Z’s not-so-good name.

In a move considered to be one of the more boneheaded in literary history, hapless prosecutor V decides to try only S for corruption, assuming that he’ll roll over on Z and that will be that. Ha! Z and S make a deal, with Z assuring S that if he just takes the rap and plays prisoner nice-nice, he’ll be out in a few short years later on a “health pass”. Indeed, although S does several weeks of soft time, he tells the public, from behind the walls of his mansion, that he subsists on a handful of pills due to his lengthy list of infirmities. The public remains circumspect.

At issue is whether the Spy Tapes—a recording of idiot prosecutor V and foolish head of a crack police team, L—implicate President M in a game of political buggery: did M try to manipulate the timing of Z’s trial in order to ensure that he would head to the docks immediately before the all-important Congress, thus smearing him as a rotter before the public?

The labyrinthine National Prosecuting Authority, at that time expunged of anyone capable of clapping with two hands, is all set to rule—did political manipulation mar the ability of Z’s right to a fair trial?

Only one problem: the highest court in the land already insisted that political manipulation bears no influence on the trial itself—it doesn’t matter why charges are brought before the courts to be assessed, it matters how the evidence is presented and examined under the scrutiny of the Constitution (which is used as toilet paper in NPA bathrooms). The proof for political manipulation lies, the people are told, on the Spy Tapes made by Z—this is released to the public as a series of transcripts that prove little more than the fact that stupidity is widely practiced throughout the land. The rest of the tapes—the stuff the public hasn’t heard—are, according to Z and his lawyer, H, much much worse.

The adjudicator parachuted in to make the ruling, the cretinous X, claims that it is the most difficult decision he had ever made in his life but, in clear contravention of the ruling of the highest court in the land, he decides that Z was indeed the subject of political manipulation, and chucks the charges into the rubbish bin. Perhaps he thinks that Z, now a shoe-in for the Presidency, will reward him for his cheeky malfeasance. He’s right about only one thing—Z is a shoe-in for the Presidency.

In a lengthy interlude, Z sleeps with several of his friends’ daughters, gets married a few times, and has a love child or three. He looks over blueprints for an extension of his house, and in an extended scene widely considered to be the book’s dark comic high point, makes a bond application for said extension.

The Party’s main competition—the so-called Opposition—decide that they would like to ensure that Z does indeed stand trial for the 783 charges hanging over his head like a burbling rain cloud. Like tiny birds chirping from a very high tree deep in a large forest, they make an appeal to the NPA, insisting that they want to hear the stuff on the Spy Tapes that is much much worse, so they can make some sense of X’s ruling.

But the NPA, citing the propriety and good manners their mama taught them, insists that they must ask Z if it is okay by him if the tapes are released. After all, he got the Intelligence Service to record the tapes, he gave the NPA the tapes as part of his representation, so they are therefore surely Z’s to disseminate as he sees fit, are they not?

Anyway, at this point the book proceeds to detail 23,000 pages of back and forth between Z’s legal team and the various courts of the land—the “Appeal” of the title. Although the High Courts constantly insist that Z must hand over the Spy Tapes, he and H simply appeal the ruling, and for 400 years the process goes on and on and on, until there is no longer a appliance in the land that is capable of playing what is on the Spy Tapes, which at this point is widely believed to be a lengthy brunch order for Tasha’s.

It is now the year 2413, and Z—wondering about his vast palace in a cryogenic bodysuit—louts about with S, who still subsists on his legendary regimen of pills. Around them, the land is in smouldering ruins, but they appear unconcerned. Jolly and full of fine wine, they play the Spy Tapes on repeat on an old reel-to-reel device.

It is, indeed, a lengthy brunch order for Tasha’s. And it sounds delicious. DM