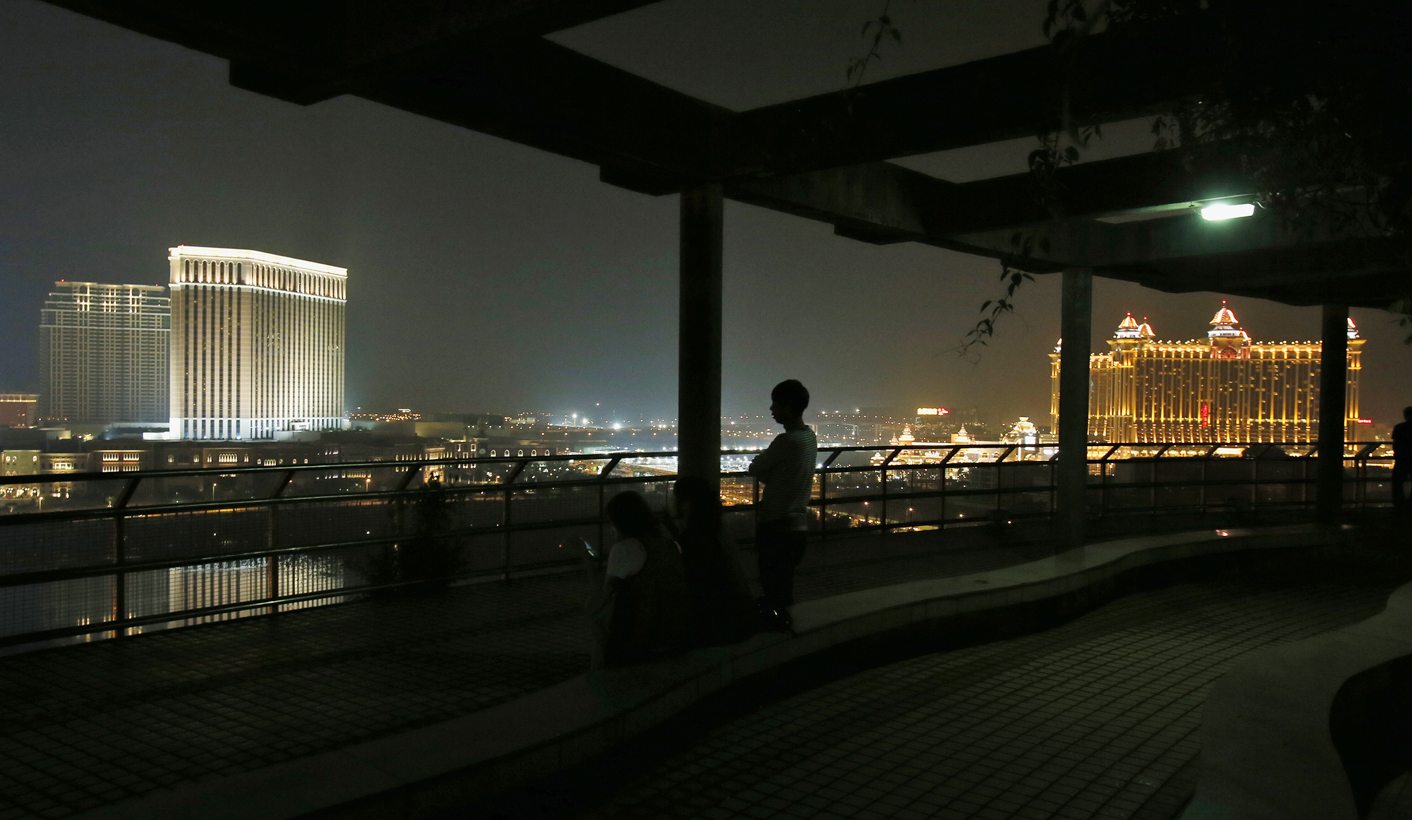 Once a sleepy colonial backwater, Macau has re-invented itself as gambling capital of the world, an outlandish Vegas-by-the-South China Sea that’s raking in more money than Vegas could ever dream of. SIMON ALLISON took a spin around the casino floor.

Forget Vegas. Vegas is old school. Vegas is 20th century, and in case you hadn’t noticed, that has come and long gone. These days, the smart money has moved east, far east, to a little place the Portuguese called Macau. The rest of us are beginning to know it by its new title: gambling capital of the world.

This is no PR slogan or idle boast. If you follow the cash, and in gambling that’s really the idea, it takes you straight to this sliver of land that early colonialists carved off the rump of mainland China. Already, the place generates six times the revenue of Las Vegas, and there’s plenty more where that came from.

Except, walking from monstrous hotel to monstrous hotel, under the flashing neon lights and garish faux-everything, it’s impossible to forget Vegas. Sometimes, this is all too literal. Here’s the Venetian, transplanted entire and intact to Asia, with a Macau twist – it’s twice the size of its Vegas twin, complete with warbling gondoliers (opera-standard singers imported from Europe) and the world’s largest gaming floor. It’s a replica of a replica, magnificent in scale and ambition, even if not exactly faithful to Venice itself.

Turn a corner and there looms the MGM; turn another and Steve Wynn’s signature is scrawled in silver on the side of building. The Vegas barons have come here to play, and it’s paying off in a big way. Sheldon Adelson, baron-in-chief of Las Vegas Sands Corp., just released his company’s second quarter earnings. He’s up 120% on last year, growth fuelled almost entirely by his four casinos in Macau (among them the Venetian).

Photo: Chinese visitors eye a lucky wheel by Aruze Gaming of the U.S. during the Global Gaming Expo Asia in Macau May 22, 2013. The event aims to provide a one-stop platform for gaming decision makers to source for new products and services and meet the industry’s top manufacturers, according to its official press release. REUTERS/Bobby Yip

The big boom in Macau actually began 13 years ago when the Portuguese handed over the territory to Communist China, where gambling is illegal. After gaining control under the two systems-one country rule (the same principle that allows Hong Kong to function with significant autonomy), China decided to keep Macau’s casinos open, reasoning that it was useful to have somewhere for their long-suffering but newly-minted citizens to blow off steam. They insisted on one major change, however – busting the monopoly of a certain Stanley Ho, one-time blockade-busting pirate chief turned gaming kingpin.

Ho wasn’t particularly impressed with this decision, but with tanks occupying Macau’s picturesque Senado Square, one of the last remnants of the city’s other identity as charming colonial backwater, Ho didn’t have much of a choice.

And so the new concessions were granted. So far, there are six. Stanley Ho’s got one, as does one of his sons (in partnership with Australian billionaire James Packer) and one of his daughters (in partnership with MGM). Sheldon Adelson and Steve Wynn, both of who are looking to eclipse the fortunes they’ve already made on the Vegas Strip, each possess one. The final concession is operated by Hong Kong’s enormously wealthy Lui family.

Between them, they have revolutionised the city, radically changing everything from its skyline to its economic foundations. The numbers are staggering. The Venetian alone employs 27,000 locals. For a city with a population of just 580,000, that’s a good 5% of the entire local work force. Unemployment in Macau is under 2%, with high-paying casinos accounting for most of the jobs. Gambling revenue is around $38-billion, with the city getting a hefty 39% cut of winnings (some operators are trying to lure their really high-rollers to Vegas where the tax hit is much softer).

Old blocks are seen at a residential district as the Grand Lisboa casino (L) is seen in the background, in Macau, October 11, 2012. While the boon from the development of the gambling industry over the past decade has helped to improve the general standard of living — Macau is set to be the world’s fastest growing economy this year — residents say the development of social infrastructure, transport, welfare is significantly lagging that of the gambling sector. Picture taken October 11, 2012. REUTERS/Bobby Yip

Of course, there’s a dark side. That employment rate is wholly dependent on Macau maintaining its incredible upward trajectory, which depends in turn on China keeping up its steady growth. As soon as an economic downturn hits, Macau has nothing else to fall back on. Rumours of triad involvement just won’t go away, with the Chinese gangs said to be heavily involved in bringing the high rollers in from the mainland (due to strict currency export restrictions, many Chinese come to Macau and gamble on triad credit, with surety lodged at home). And where there’s money, there’s sex. Macau’s got a huge prostitution industry and has been identified as a primary destination for victims of sex trafficking from Mongolia, Vietnam, Thailand and Russia, many of whom are lured with false promises of casino jobs.

Not that any of this is stopping anyone. Most of the casino operators have big expansion plans, with the action moving swiftly from the centre of town to a deliberately self-conscious imitation of the Vegas Strip, known as the Cotai Strip. The name is a contraction of Coloane and Taipa, the two islands located just off shore that are connected to the mainland by the strip (which is made of reclaimed land). By 2016, Wynn will have another resort there, as will MGM, and Adelson will open another replica of a replica, the Parisian.

The new developments are just in time for the completion of the Hong Kong-Macau highway in 2017, which is expected to bring in another flood of punters willing to give their cash away on the baize-covered tables. “Sometimes we call it donations,” said one off-message casino PR executive. Remember, the house never loses.

In one of the lobbies of the Wynn Hotel, there’s a perfect metaphor for all this. Every hour the floor opens and out from it emerges a golden tree, life-size and fluttering in a manufactured breeze. Onlookers gasp at the garish if admittedly spectacular attraction, and then the strangest thing happens – they start to chuck coins at it, for luck. The symbolism hits you on the head like a big golden stick: we’re in a casino, and here’s a money tree, and here are people actually throwing money at it. Welcome to Macau. DM