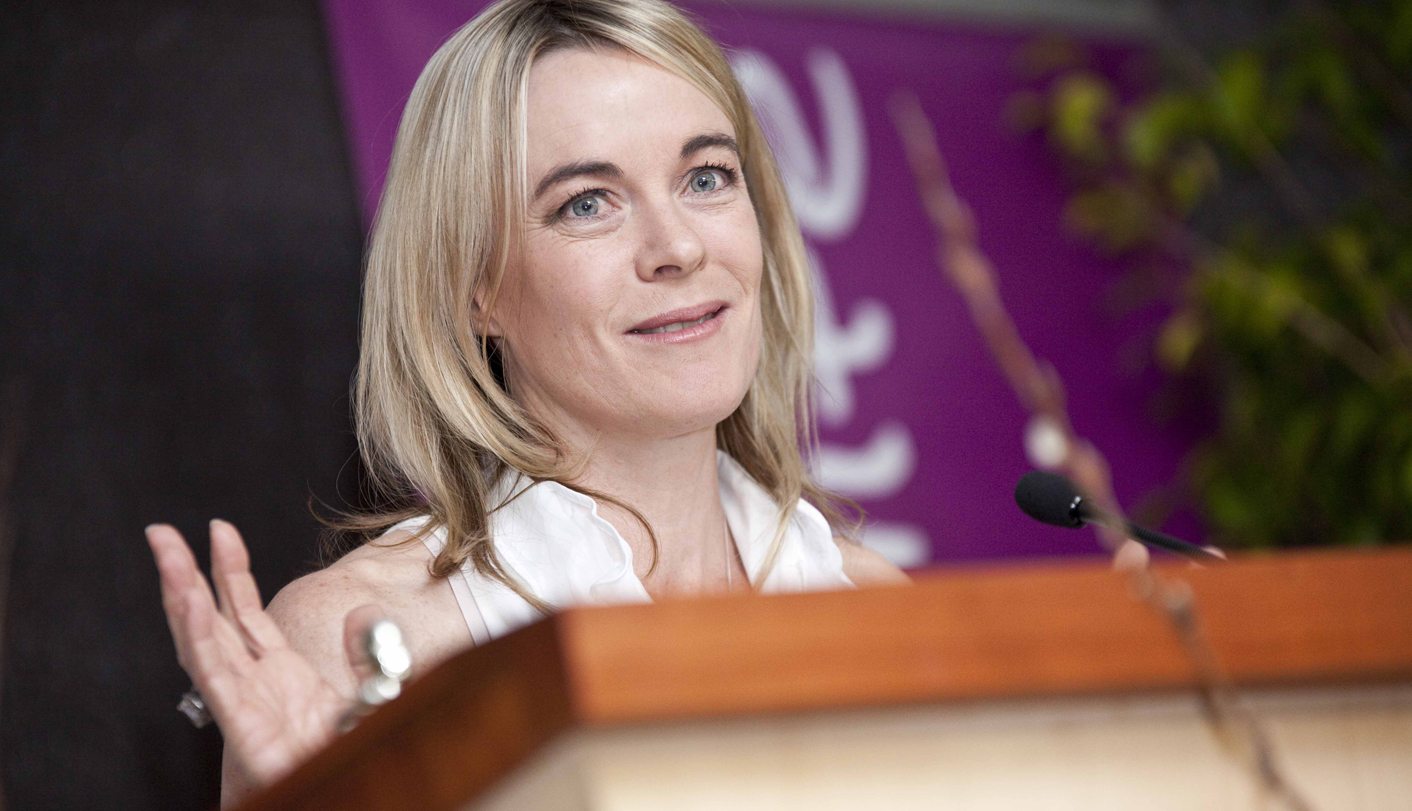 When Vanessa Lynch’s father was brutally murdered in Johannesburg in 2004, she made it her mission to help educate South Africa about the vital role that DNA evidence can play in helping to convict criminals. Nine years on, her DNA Project campaign has just taken a major step forward. On Wednesday, the National Assembly is set to approve the DNA Bill, which will set up a national database collecting forensic DNA profiles from convicted criminals and those arrested for serious crimes. By REBECCA DAVIS.

Last July, the DNA Project set up a large sandbox in the centre of Cape Town’s busy Metrorail station. In the box, tiny stones of differing colours were laid out to form the distinct image of a mug shot of a convict holding up an ID board. Then commuters were allowed to walk all over the box. It didn’t take long for the passing foot traffic to almost entirely obliterate all traces of the image of the convict’s face. The commuters were filmed walking over the box, and a video was made of the event.

“Every year in South Africa more and more criminals escape conviction due to people disturbing crime scene evidence,” the video begins. “The DNA Project set out to educate the public never to interfere with a crime scene.” The image in the sandbox, originally pristine, is quickly wiped out by time-lapse images of people walking over it.

“It didn’t take long before the criminal’s identity had disappeared,” the video continues. “The message was clear. Never disturb a crime scene.”

It’s a lesson that DNA Project founder Vanessa Lynch learned firsthand. In 2004, Lynch’s father John was attacked by intruders in his Bryanston home and shot to death trying to defend his wife and home. Every scrap of DNA from the scene was lost.

“I’m not pointing fingers, because it was largely due to ignorance,” Lynch recalls now from her office in Cape Town’s Green Point. “Neighbours and friends cleaned everything up because they wanted to make sure we weren’t offended by the blood.” In the process, she says, they “desecrated” the crime scene.

In addition to this interference, the first arrivals on the scene – as happens often in South African crime situations, Lynch says – were paramedics rather than the police. “These guys come rushing in and do not always consider that they might be removing vital evidence, or bringing in evidence which confuses the crime scene,” Lynch says. “In my dad’s case, somewhere between the paramedics and the emergency room personnel, my father’s clothes were discarded.” Lynch has since attended an international Interpol conference at which forensic scientists estimated that up to 70% of DNA evidence might be found on the victim’s clothes.

Her father’s killers had been drinking brandy and coke in the garden before they entered the house, as was evident from a bottle found in the garden. “They said they didn’t have the necessary technology to uplift DNA from bottles,” Lynch recounts. She sounds matter-of-fact rather than bitter. “It was 2004. They did.”

Without DNA, there was not a scrap of usable evidence to pin the crime on anyone. Two weeks later, the police inspector in charge of investigating the murder sat in front of Lynch at the family’s dining-room table. They were closing the file, he announced.

“I’ll never forget the physical sensation of the file being closed,” Lynch says. “He just said, ‘We’re never going to get these guys’. I thought – that can’t be right.” Nobody has ever been arrested for the murder of John Lynch.

At the time, Vanessa Lynch was a commercial lawyer. She knew nothing whatsoever about forensics or the intricacies of DNA. But over the last nine years the subject has become her life. Lynch established the DNA Project with the help of Rob Matthews, whose daughter Leigh was kidnapped and murdered in 2004 in a case that horrified the nation.

Up until now, Lynch says, the “effective” use of a DNA database for criminal intelligence has not been possible due to the lack of relevant legislation. When DNA did play a role in police work, it was on an occasional, case-by-case basis, in a way that might solve one case but did little to identify serial offenders or link seemingly unrelated cases. While DNA isn’t a silver bullet, she points out, it’s one of the firmest forms of criminal evidence in existence. “People think eye-witness testimony is reliable. Often it isn’t.”

The DNA Bill, she hopes, will revolutionise crime investigation in South Africa and secure convictions. The national DNA repository will bank DNA profiles from all criminals convicted of serious Schedule 8 offences – rape, murder, theft, assault – and all parolees, detainees and suspects. Once a DNA profile has been entered into the database, the DNA sample will be destroyed within 30 days. This measure will hopefully allay the concerns of those who fear that corrupt cops might use DNA samples to frame those wrongfully arrested for crimes, though the Bill does not state as much.

What the implementation of the Bill will mean is that all prisoners convicted of Schedule 8 offences who are currently in South African jails will be required to have their DNA swabbed by police in the forthcoming weeks, months and years. It is, Lynch says, an exceptionally easy procedure, involving collecting cells from the inside of one’s cheek with what resembles a large ear-bud. Once the database is established, some prisoners already locked up for crimes may find themselves implicated through DNA to other crime scenes, especially as recidivism rates in South Africa are high.

“If they had collected DNA evidence at the time of my father’s case there could still be a chance of catching his killers in this way, nine years later,” Lynch explains. But just as important, she notes, is the role DNA evidence has to play in exonerating those wrongly accused of crimes. (Lynch sits on the committee of the Innocence Project, an NGO devoted to the acquittal of wrongfully convicted individuals through DNA testing.)

While Lynch was explaining her project, a court in Pretoria was hearing the indictment of Oscar Pistorius on murder charges. During the athlete’s bail hearing, however, there were already accusations that the state had contaminated the crime scene through a failure to wear protective footwear. If in full trial this proves to be the case it will be the latest in a number of high-profile South African cases compromised by the quality of the forensic investigation. The case of murdered Stellenbosch student Inge Lotz, killed in 2005, has apparently been slated worldwide as an example of how not to conduct forensic investigation, and Lotz’s murderer is still unknown.

SAPS is also notorious for losing evidence relating to criminal cases. Are there any guarantees, then, that a DNA Bill will have the desired effect if the very basics of police work in South Africa are so often shoddily executed, or not carried out at all?

“Well, what would you rather have us do?” asks Lynch. “Shall we face the challenges, and try to resolve them, or not have any police or forensic science laboratories at all?”

From their side, SAPS’ forensic unit has indicated that they’re ready to run with the Bill as soon as it’s passed. “We would not let government pass legislation that we are not ready to implement,” major-general Adeline Shezi of SAPS Forensic Services Laboratories was quoted as saying in July.

During the course of talking to Lynch she receives two telephone calls from police stations asking the DNA Project to set up crime scene and forensic awareness workshops for their staff in preparation for the Bill’s passing. And it’s not just police who need to be taught to become more DNA-savvy.

“Now we have a Bill, a [national forensic oversight and ethics] board, and [forensic] laboratories. But we all need to be educated. That is very important,” says Lynch. The DNA Project, which is largely funded through the Change A Life Trust and the Open Society Foundation, carries out DNA awareness workshops in various communities. One of the most important messages to get across is the need not to clean up crime scenes, even though it is often undertaken with the best of intentions to spare the feelings of the victim’s family. In Lynch’s office, a banner above her desk spells out the message: “Disturbing a crime scene makes it impossible to identify the criminal”.

While Lynch sees the enacting of the DNA Bill as a major step forward, she’s under no illusions: what will matter is how the bill is implemented. “This is just the beginning. This will be the most critical test,” she says. DM