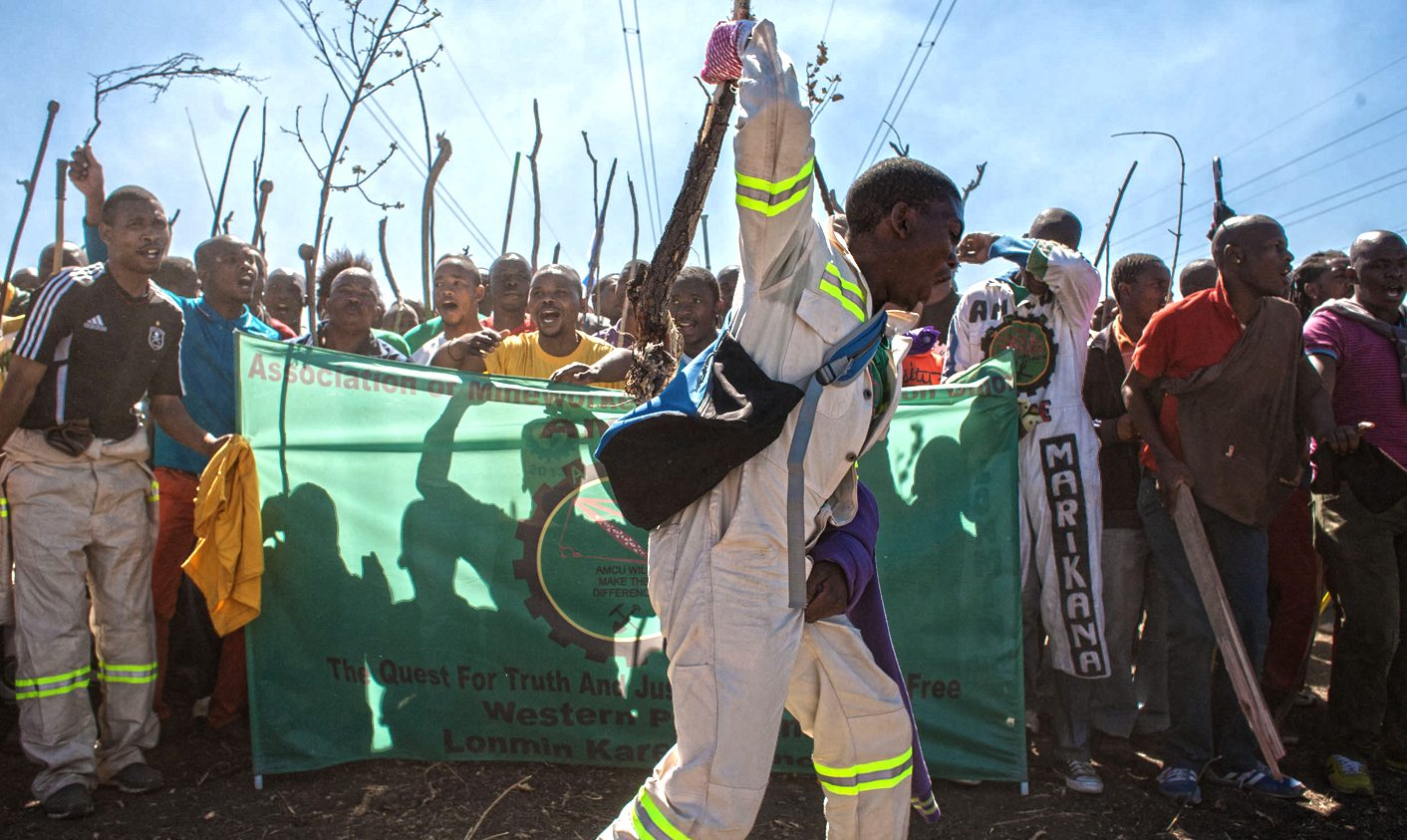 On August 16, thousands of people returned to the infamous koppies in Marikana for the commemoration marking one year since 34 people were killed by police. GREG NICOLSON brings you the photos.

Photo: Miners chant slogans during the one-year anniversary commemorations to mark the killings of 34 striking platinum miners shot dead by police outside the Lonmin Marikana platinum mine in Rustenburg, 100 km (62 miles) northwest of Johannesburg, August 16, 2013. South Africa’s government and ruling African National Congress (ANC) party said they were staying away from the commemorations on Friday. The decision revealed political splits and tensions still surrounding the so-called “Marikana Massacre”, which was the bloodiest security incident since the end of apartheid in 1994. REUTERS/Siphiwe Sibeko

Photo: Economic Freedom Fighters leader Julius Malema had many supporters in the crowd and he used his speech to lambast President Jacob Zuma, the police and Lonmin management for not accepting responsibility for the 16 August massacre. (Greg Nicolson)

Photo: A woman dabs her eyes during the one-year anniversary commemorations to mark the killings of 34 striking platinum miners shot dead by police outside the Lonmin’s Marikana platinum mine in Rustenburg, 100 km (62 miles) northwest of Johannesburg, August 16, 2013. South Africa’s ANC government pulled out at the last minute from a memorial ceremony marking the anniversary of the nation’s bloodiest post-apartheid labour violence, drawing attention to the dominant party’s loss of support among many mineworkers. REUTERS/Siphiwe Sibeko

Photo: Workers’ ongoing struggles and the demand for justice were key themes of the day. The demand for a R12,500 salary was often mentioned. (Greg Nicolson)

Photo: The koppie where the striking miners spent their time last year before being killed was covered with people. Here, workers pray in front. (Greg Nicolson)

Photo: Some workers said it was a painful day to return to the area and the koppie where the killings happened. (Greg Nicolson)

Photo: Advocate Dali Mpofu was the event’s MC and multiple speakers talked about his legal team at the Marikana Commission fighting to get funding from government. At a worker’s request, buckets were passed through the crowd for donations tothe legal fees. (Greg Nicolson)

Main photo: The day started with wave after wave of mineworkers marching towards the koppies while singing songs of their struggle. (Greg Nicolson)