Rugby Championship: Boks lineup will have its hands full against Argentina 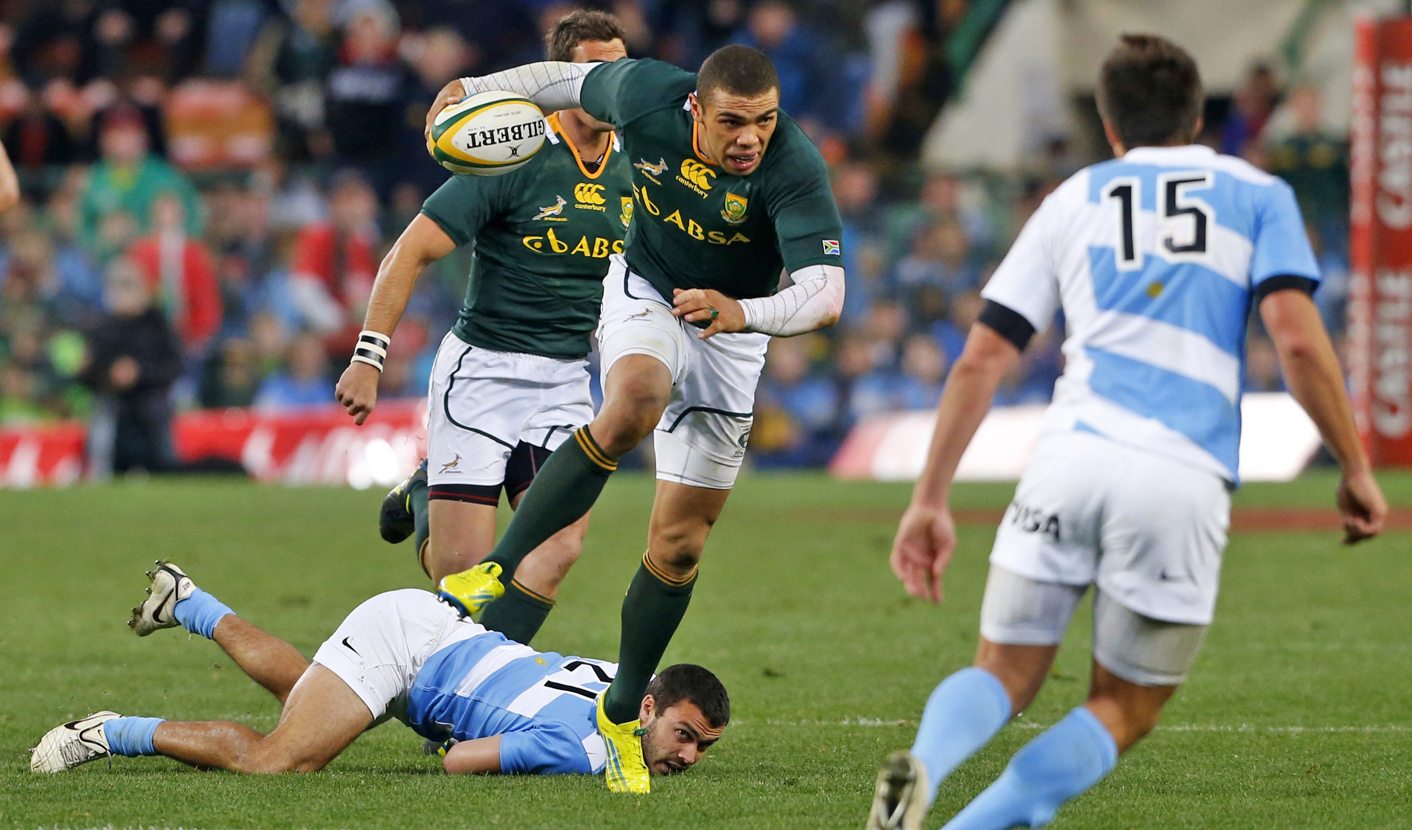 A comeback for a top-class eighthman and the return of a rapidly-maturing number five lock are the features of a Springbok side announced on Wednesday that was chosen on the basis of continuity, according to coach Heyneke Meyer. By KEN BORLAND.

The Springboks open their Rugby Championship campaign with a game against Argentina at the FNB Stadium on Saturday that has huge potential to be a real banana peel of a match – everyone expects South Africa to maintain their unbeaten record against the Pumas, but a slip-up and a defeat on home turf is still a definite possibility.

Duane Vermeulen, a powerful, physical eighthman, returns to the back of the scrum after a season once again disrupted by injury, while Juandre Kruger, a brilliant lineout organiser and jumper, is back in the number five jersey.

There are a couple of new faces on the bench as well – although the actual visages of scrumhalf Fourie du Preez and prop Gurthro Steenkamp are famous all over the rugby world as experienced former World Cup winners.

Vermeulen comes in for the injured Pierre Spies, the Bulls’ eighthman whose abilities are way more highly rated by the Springbok management than by those who base their opinion on televised displays.

“Duane can bring something different, he’s physical and unbelievably good on the ground, he’s like an extra openside flank because he competes very well for the ball. He’s good in the lineout too and I expect a good performance from him,” Meyer said on Wednesday.

Kruger, a good communicator in the lineout, returns in place of Flip van der Merwe, who moved from his normal number four position to number five to add some fire to the pack for their last Test against the combative Samoans in June.

For the time being, Meyer has decided to ease the Japan-based Du Preez into action off the bench, with Ruan Pienaar again the starting scrumhalf.

While we all wait with bated breath to see whether the talismanic 31-year-old can still dominate proceedings on the field as he did during his prime, there is no doubting Du Preez’s off-field value in guiding and motivating the Springboks.

“It would be unfair to expect and a lot to ask for Fourie to come straight in and start during his off-season, and it’s the right thing for the team for him to ease back in. He will definitely get game time and that’s a lot of experience to bring on,” Meyer said.

Meyer said Pienaar’s retention in the number nine jersey was all part of his desire for continuity.

“Ruan is the number one choice, he’s the guy in the saddle and we’ve opted for continuity.

“I don’t want to chop and change every week, we’ve won six Tests on the trot and we want to take that momentum forward. We’ve only had one week’s proper preparation for this Test, so that’s why I wanted to keep continuity. Because we’ve had very little time to prepare, continuity has been the deciding factor in selection,” Meyer said.

Because of this policy, the in-form Adriaan Strauss also retains the number two jersey ahead of the benched Bismarck du Plessis, who is considered the best hooker in the world.

The other key features of the selection are Meyer placing his faith in Willie le Roux at fullback and Bjorn Basson on the left wing, while the scavenging skills of Siya Kolisi see him earn the loose forward reserve’s spot on the bench ahead of ball-carrier and tackler Marcell Coetzee, a result of the coach’s new emphasis on the breakdown.

The defensive frailties of Basson are a concern and the awful mistake he made in the Bulls’ 22 during the SuperRugby final led to the match-winning, last-minute try by the Brumbies. JJ Engelbrecht, the outside centre for Saturday’s Test, has also shown a propensity to rush out of the defensive line, and the cut-throat intensity of international rugby means such mistakes can mean the difference between victory and defeat.

“We’ve only had one defence session during the week and it’s difficult to fix things like that in that time. But they are both great players and I have a lot of confidence in our defence, we’ve only been conceding a little more than one try per Test on average.

“Bjorn and JJ are both brilliant attackers and that means the other guys need to defend too. I want an attacking mindset, they say the best form of defence is attack, and even the best backline in the world will make mistakes now and then,” Meyer said.

Kolisi confirmed that the breakdown would be his key focus.

“I want to become more of an openside flank and I’ve been working hard on slowing down the ball and getting to the ball first. Richie Gray [the Springboks’ new breakdown consultant] really knows what he is talking about and he’s had us getting quickly off the ground.

“These days you can’t play with nobody for the breakdown, you need quick ball in order to score tries, and we’re looking forward to getting better in that department.

“It’s my first game in the Rugby Championship, so it’s huge for me. I don’t feel entrenched in the squad because there are a lot of good loose forwards, and I must perform well every week to stay part of the 23,” Kolisi said.

Meyer said pace to the breakdowns would be crucial against Argentina because they employ similar tactics to the All Blacks.

“Argentina give you the outside gaps and then counter-ruck you, like the All Blacks do. So cleaning out at the rucks is very important,” Meyer said.

Meyer will hope for the same precision and attention to detail in all facets of the game if the Springboks are to avoid turning the celebrations of Nelson Mandela’s birthday into a sorry start to the Rugby Championship. DM