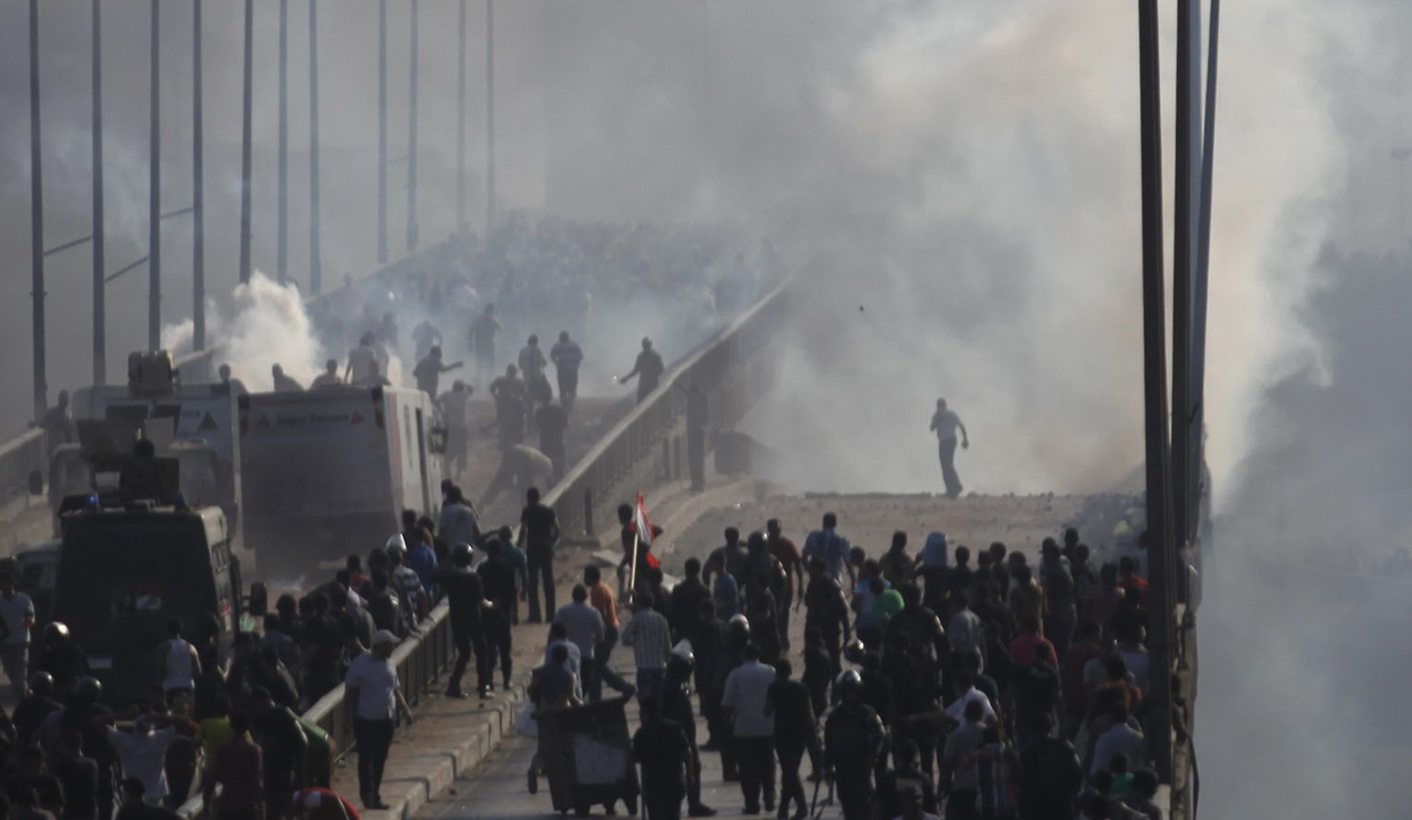 Egyptian security forces crushed the protest camps of thousands of supporters of the deposed Islamist president on Wednesday, shooting almost 200 of them dead in the bloodiest day in decades and polarising the Arab world's most populous nation. By Yasmine Saleh and Tom Finn.

At least 235 people were killed in all, including at least 43 police, and 2,000 wounded, a health official said, in fierce clashes that spread beyond Cairo to towns and cities around Egypt. Deposed president Mohamed Mursi’s Muslim Brotherhood said the death toll of what it called a “massacre” was far higher.

While bodies wrapped in carpets were carried to a makeshift morgue near the Rabaa al-Adawiya mosque, the army-backed rulers declared a one-month state of emergency, restoring to the military the unfettered power it wielded for decades before a pro-democracy uprising toppled autocrat Hosni Mubarak in 2011.

Interior Minister Mohamed Ibrahim said 43 police were among the dead. Security forces had completely cleared two protest camps in the capital and would not tolerate any further sit-ins, he said, vowing to restore Mubarak-era security.

Prime Minister Hazem el-Beblawi defended the use of force, condemned by the United States and European governments, saying the authorities had no choice but to act to end “the spread of anarchy”.

“We found that matters had reached a point that no self-respecting state could accept,” he said in a televised address.

The authorities imposed a dusk-to-dawn curfew in Cairo and several other cities including Alexandria, Egypt’s second city on the Mediterranean coast.

The use of force prompted Mohamed ElBaradei, a former U.N. diplomat and the most prominent liberal supporter of Mursi’s overthrow, to resign as vice president, saying the conflict could have been resolved by peaceful means.

“The beneficiaries of what happened today are those call for violence, terrorism and the most extreme groups,” he said.

Thousands of Mursi’s supporters had been camped at two major sites in Cairo since before he was toppled on July 3, and had vowed not to leave the streets until he was returned to power.

The assault, ending a six-week stand-off, defied international pleas for restraint and a negotiated political solution. Straddling the Suez Canal, a vital global trade route, Egypt is a key U.S. ally at the heart of the Middle East and was the first Arab state to make peace with Israel.

U.S. Secretary of State John Kerry, European Union foreign policy chief Catherine Ashton and U.N. Secretary-General Ban Ki-moon all deplored the use of force and called for the state of emergency to be lifted as soon as possible.

A U.S. official told Reuters that Washington was considering cancelling the biennial “Bright Star” joint military exercise with Egypt, due this year, after the latest violence, in what would be a direct snub to the Egyptian armed forces.

Violence rippled out from Cairo, with Mursi supporters and security forces clashing in the cities of Alexandria, Minya, assiut, Fayoum and Suez and in Buhayra and Beni Suef provinces.

The bloodshed also effectively ended for now the open political role of the Brotherhood, with the harshest crackdown on a movement that survived underground for 85 years to emerge after the 2011 uprising and win every election held since.

Security officials initially said senior Brotherhood figures Mohamed El-Beltagi and Essam El-Erian had been arrested, joining Mursi himself and other Brotherhood leaders in jail, but later acknowledged they had not been captured. Beltagi’s 17-year-old daughter was among the dead.

Beltagi warned of wider conflict, and urged people to take to the streets to oppose the head of the armed forces, who deposed Mursi on July 3 following mass protests.

ElBaradei’s political movement, the anti-Islamist National Salvation Front, did not share his qualms, declaring that “Egypt has held its head high in the sky announcing victory over political groups that abuse religion”.

Since Mursi was toppled, the security forces had twice before killed scores of protesters in attempts to drive Mursi’s followers off the streets. But they had held back from a full-scale assault on the tented camp where followers and their families have lived behind makeshift barricades.

After the assault on the camp began, desperate residents recited Koranic verses and screamed “God help us! God help us!” while helicopters hovered overhead and armoured bulldozers ploughed over their makeshift defences.

Reuters journalists on the scene saw masked police in dark uniforms pour out of police vans with sticks and tear gas canisters. They tore down tents and set them ablaze.

“They smashed through our walls. Police and soldiers, they fired tear gas at children,” said Saleh Abdulaziz, 39, a secondary school teacher clutching a bleeding wound on his head.

After shooting with live ammunition began, wounded and dead lay on the streets among pools of blood. An area of the camp that had been a playground and art exhibition for the children of protesters was turned into a war-zone field hospital.

Seven dead bodies were lined up in the street, one of them a teenager whose skull was smashed, with blood pouring from the back of his head.

At another location in Cairo, a Reuters reporter was in a crowd of Mursi supporters when he heard bullets whizzing past and hitting walls. The crowd dived to the ground for cover. A man was killed by a bullet to the head.

The government insists people in the camp were armed. Television stations controlled by the state or its sympathisers ran footage of what appeared to be pro-Mursi protesters firing rifles at soldiers from behind sandbag barricades.

Reuters journalists and other Western media did not witness such incidents. The crowds appeared to be armed mainly with sticks, stones and concrete slabs against police and troops with rifles.

The violence was the worst in Egypt since war with Israel in 1973 and forces tough decisions upon Egypt’s Western allies, especially Washington, which funds Egypt’s military with $1.5 billion a year and has so far refused to label the army’s overthrow of Mursi a “coup”.

“The United States strongly condemns the use of violence against protesters in Egypt,” White House spokesman Josh Earnest said. “We extend our condolences to the families of those who have been killed, and to the injured. We have repeatedly called on the Egyptian military and security forces to show restraint.”

“We also strongly oppose a return to a State of Emergency law, and call on the government to respect basic human rights such as freedom of peaceful assembly, and due process under the law. The world is watching what is happening in Cairo.”

The United States and Europe had pressed hard for Egypt’s generals not to crush the demonstrators. A diplomatic effort to open talks between the Brotherhood and the authorities, backed by Washington, Brussels and Arab states, collapsed last week.

Outside of Cairo, state media said Mursi supporters had besieged and set fire to government buildings and attacked several churches. Christians, who make up 10 percent of the population of 85 million, have feared reprisals from Islamists since the Coptic Pope Tawadros endorsed the military takeover.

Among the dead in Cairo were at least two journalists. A Reuters photographer was shot in the foot.

At a makeshift morgue at the camp field hospital, a Reuters reporter counted 29 bodies, with others still arriving. Most had died of gunshot wounds to the head.

A 12-year-old boy, bare-chested with tracksuit trousers, lay out in the corridor, a bullet wound through his neck. His mother was bent over him, rocking back and forth and silently kissing his chest. One of the nurses was sobbing on her hands and knees as she tried to mop up the blood with a roll of tissue.

Adli Mansour, the judge appointed president by the army when it overthrew Egypt’s first elected leader on July 3, announced a state of emergency for one month and called on the armed forces to help police enforce security. Rights activists said the move would give legal cover for the army to make arrests.

Turkey urged the U.N. Security Council and Arab League to act quickly to stop a “massacre” in Egypt. Iran warned of the risk of civil war. The European Union and several of its member countries deplored the killings.

Liberals and young Egyptians staged huge rallies demanding that he resign, and the army said it had removed him in response to the will of the people. Since he was deposed, Gulf Arab states have pledged $12 billion in aid, buying the interim government valuable time to try to put its finances back in order.

By late afternoon, the campsite where Mursi’s supporters had maintained their vigil for six weeks was empty. One man stood alone in the wreckage reciting the central tenet of Islam through a loudspeaker: “There is no God but Allah.”

He wept, and then his voice broke off into silence. DM

Photo: Members of the Muslim Brotherhood and supporters of ousted Egyptian President Mohamed Mursi flee from tear gas and rubber bullets fired by riot police during clashes, on a bridge leading to Rabba el Adwia Square where they are camping, in Cairo August 14, 2013. REUTERS/Amr Abdallah Dalsh