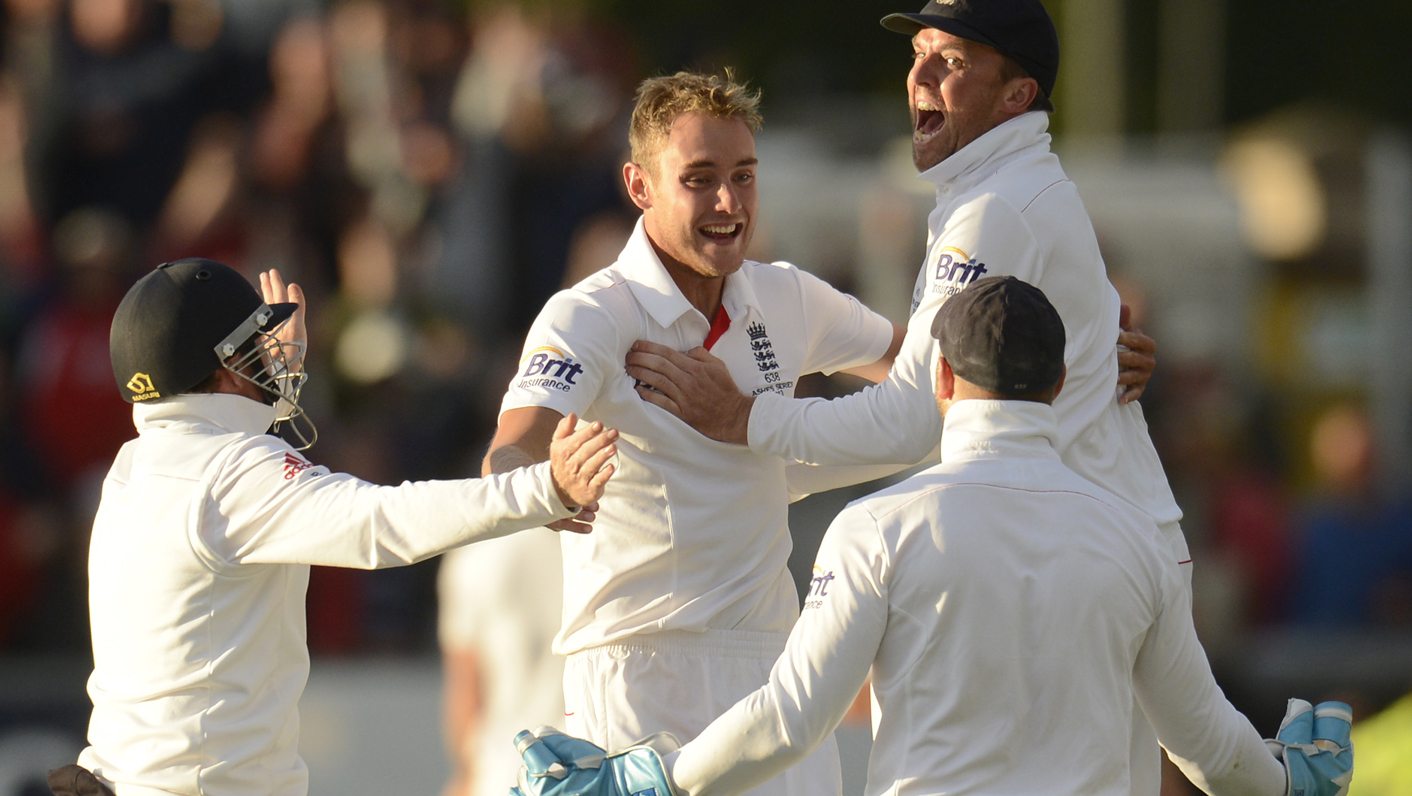 It was game, set and match for England as they topped retaining The Ashes at Manchester with winning the series in Durham. Despite plenty of issues with their batting, Stuart Broad took 11 wickets in the match to inspire the hosts to win the game and the series. But what’s left to talk about? ANTOINETTE MULLER picks five things.

It didn’t take long for Australia become spineless again. If they were South Africans, many would be muttering the c-word as the visitors went from 109-1 to 244 all out, meaning England capped a series win long before the fat lady sang.

The visitors’ openers set a solid platform in their quest for 299, with a 109-run partnership. The middle order looked inept as they lost five wickets for 32 runs in a Stuart Broad-inspired collapse. While there can be some argument for the marginal leg-before calls which led to the end of Shane Watson and Brad Haddin, no excuse can or should be made for Australia’s technical frailties.

Australia was bundled out for 224 as Stuart Broad bagged 11 scalps and England claimed a 74-run win. In the end, it looked pretty easy for the hosts, but the test match ebbed and flowed almost without end. There was much more to talk about, though, and we’ve picked out five key points.

England plays traditional cricket; that much has been clear throughout the series. There’ll be no innovative declarations or aggressive chases if it puts the win at risk. Alastair Cook’s captaincy was pitifully conservative on day four, though. His field settings allowed David Warner to take singles at will. Despite the bowlers managing a few dot balls to put the pressure on, it didn’t bother Warner much. He scored freely and quickly, exactly the kind of aggressive approach Australia needed at the top of the order. Australia also managed to consistently get the ball down to third man, yet England refused to put a third man in place. What’s that thing about cutting off your nose? There were flickers of inspiration when Cook brought Tim Bresnan into the attack in the 44th over. Bresnan drew Warner forward and found the edge which allowed Matt Prior to take a good catch. Not that it mattered; Cook’s conservatism was hardly an issue by the end of the day as Stuart Broad found his mojo and Australia continued to flap around with the bat, even if part of that flapping was thanks to a few marginal LBW calls.

David Warner received a standing ovation from the members at Durham when he was dismissed for a solid 71 off 131 balls. This is just a week after he was booed by the folks at Manchester. David Warner isn’t easy to like. He is brash, comes across as arrogant, some say he is a little bit slow (and we don’t mean with the bat) and the media were trying their best to label him Australia’s “pantomime villain of The Ashes”. But that’s the thing about cricket: even if a player is so severely disliked, in most cases, their achievements are still acknowledged when it’s warranted. Warner might not be getting invitations to Ian Botham’s BBQs, but he’s certainly becoming one of those players English cricket fans love to hate.

At the start of the Ashes, Shane Watson looked a good call as opener. He’d scored most of his runs in that position against England. Although his batting form had been on the decline, it was easy to assume that the promotion back to the top of the order would have given him the chutzpah he needed to get back into it. It seems those days are now in the past. Despite the thought that David Warner might slot into the number four position, with Phil Hughes out of favour and not having the ability to bowl, it was Watson who got the demotion. He managed some runs in the first innings, but was back to his usual self in the second. Although Watson has bowled well, he is a liability with the bat and it might serve Australia well to send him back to first-class cricket school. Two Test centuries in 45 games? That’s not quite good enough.

Does sexism swing both ways?

Stuart Broad is somewhat irksome. When he’s not getting his way, he often stomps around huffing and puffing. Sometimes, he doesn’t walk and most of the time, when he goes for a bowling review it’s on the same level of arrogance as Shane Watson. When Broad has his mojo, though, he is superb to watch. He’s aggressive, in-your-face, and gets the ball to move around a lot. He managed a brutally destructive spell at Chester-le-Street, with figures of 9-1-22-5, and took eleven wickets in the match. Yet there is one thing which is always brought up with Broad – no matter how he performs. It’s his looks. Dude looks like a lady. ‘Sally Broad’ or ‘Barbie’ are just some of the so-called ‘terms of endearment’ used to describe Broad, and many are guilty of it. However, if the shoe were on the other foot and it was a woman being called a man or butch or whatever else, there would be outrage. There is no such thing when it comes to Broad. Why is there a preconceived idea of what masculinity should look like and, more importantly, why does it even matter? Yes, we’re a shallow society, but his looks hardly determine his performances on the pitch. Does sexism swing both ways, then? Or does the issue stay muted because men are less likely to get upset with it?

Ian Bell has scored 500 runs on this tour at an average of 71.42. It’s fair to say that he is in the form of his life. He’s scored three hundreds and smashed Australia to bits. Yet, Bell hasn’t received the man of the match award once. He has scored: 25, 109, 109, 74, 60, 4* 6 and 113 in the series thus far, way more than anyone else. The batsman is yet to receive the appropriate recognition for his efforts, though. His efforts with the bat were once again over shadowed by Stuart Broad’s efforts with the ball. Who said it was a batsman’s game?