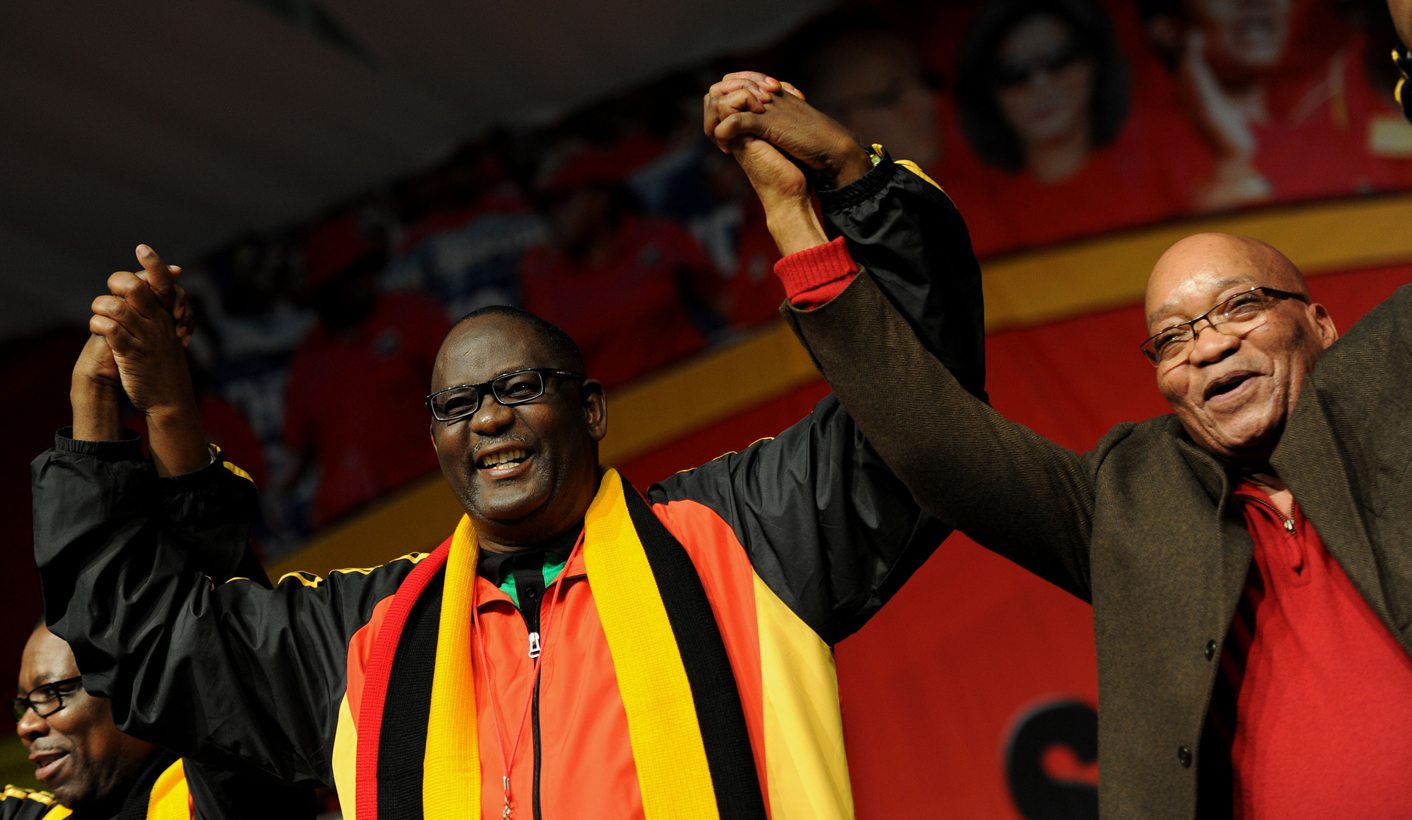 On Friday, Cosatu's general secretary Zwelinzima Vavi appeared to warn that the federation ran the risk of a split if the fallout from his own particular brand of sex scandal was not handled properly. On Monday, the National Union of Metalworkers, Vavi's biggest backers, took up the cry, claiming Cosatu at the moment is a dead duck, and that there was a very real risk of a split if the issue was not handled, well, properly. Perhaps this could be a good time to seriously consider what a split Cosatu would look like. By STEPHEN GROOTES.

There is a particular context to claims by the National Union of Metalworkers (NUMSA). It obviously aims to make the most noise ahead of the Cosatu Central Executive Committee meeting on Wednesday, where the federation’s top brass will sit down and try to work out what to do about Vavi; whether there should be an investigation into his conduct, or not. At the moment, the balance is not in Vavi’s favour; the leaders of several unions appear to be against him. NUMSA knows this, which is why it tried several months ago to use its nuclear option, calling for a special conference of Cosatu. NUMSA’s leaders are betting, probably correctly, that Vavi has more support among Cosatu rank and file than his enemies do, and if this matter were put to a vote, he’d be home and dry, while his enemies would end up without their union jobs.

That nuclear gambit having failed, it’s now moved up to its thermo-nuclear option. Essentially, NUMSA is saying that unless things are handled carefully (which is simply code for “our way”) then it’s going to pack its bags and leave. That pretty much can be the only real interpretation of its loud and repeated “warnings” that there could be a split.

At the moment, Vavi’s enemies within Cosatu may want to call NUMSA’s bluff. After all, if they don’t, they’ve effectively given real power in the federation to NUMSA, and they definitely can’t live with that. All the pointers are that we have to start looking at the possibility of irreversible chasm rather seriously.

What would a Cosatu split look like, and what would be some of its more lasting effects?

It seems unlikely that unions would simply leave as a unified body: it wouldn’t be NUMSA leaving and the National Union of Mineworkers staying, but much more complicated than that. It actually seems fairly likely that some of the unions would split down the middle. (In other words, part of NUMSA would go, and part would stay.)

If NUMSA’s leaders were to actually leave without managing to drag the entire membership with them, then it wouldn’t be too difficult for the rump of Cosatu to reconstitute some sort of metalworkers union within itself that could be used as haven for NUMSA’s own dissidents. Cosatu would probably have access to some membership records and contact details, and be able to parachute in some sort of temporary leadership, until the new formation could get itself going.

However, that would also lead to situations that we’ve seen before; rather unpleasant situations. Any of the possible moves we mentioned would create severe tensions in the workplace between different groups of metalworkers. So in factories in the Eastern Cape you would have the union formally known as NUMSA trying to keep their members, and at the same time the Cosatu-backed organisation would attempt to gain new members.

Recent events at a mine a year ago this week would seem to indicate this would not end happily. Rather we would have seriously difficult situations developing. For a start, it would be in the interests of both the new unions to have more radical policies than the other. The demands you make of management have over the years become a marketing tool, and those who demand more will likely get more members. And if you can’t get your demands met, well, then you will have to go on strike. And if one union goes on strike while the other doesn’t, well, we could start to have Marikana-like situations developing all over the country.

And if this were happening simultaneously in different places it would be even more difficult for the already stretched police to actually intervene.

Can you imagine being the poor (mlungu?) manager caught in the middle of all of this? There would be higher and higher demands from unions, and more and more strike action. All of it with a higher climate of fear, intimidation, violence. It could well become impossible to manage the situation quickly and efficiently.

And this is all just looking at one sector, the metalworkers.

And while it might be this sector that could see the most action, other sectors would also be affected. So the impact of the split would rip across many sectors of the economy all at once.

Then we have to, inevitably, look at the political implications. Would the unions that split off from Cosatu, or the new formations that are created, necessarily back the ANC? Certainly in NUMSA’s case, despite their repeated denials, probably not. Why would they? What’s in it for them?

A brief look at NUMSA’s policy documents will demonstrate how out of sync they are with those of the ANC. NUMSA is radical, it wants more state intervention, and it wants it now. There is already a political party that has very similar economic policies. And it has been started by someone who is very like Irwin Jim, in fact. He’s a bit younger, but has a great media profile.

What Young Julius is really lacking at the moment is a proper structure, and a way to manage it. The addition of logistical support from people who’ve managed a union the size of NUMSA could make a huge difference to the chances of the Economic Freedom Fighters at the next election. They would go from the freak value of watching Malema shouting in public, to actually being able to campaign in a properly structured way. And with a few new well-known faces like Jim himself, it would go from a one-man party to a real force.

Other unions, or bits of them, might go for other political formations, or could even create a few of their own. The hegemonic block that controls much of our politics now would start to not break, but to splinter, with consequences that are very difficult to foresee.

This wouldn’t all be bad. It would create more choice for voters, and might even lead to a much more level playing field. And for a while, those in the ANC might be quite glad to get rid of a few trouble-makers. Would Jessie Duarte really mourn the loss of Jim, after the pretty putrid things he said about her? Probably not.

But it is still the ANC that often talks about how important the working class is to its movement. If that working class does splinter, does somehow break apart, one of the biggest losers in the long run would be the ANC itself. DM