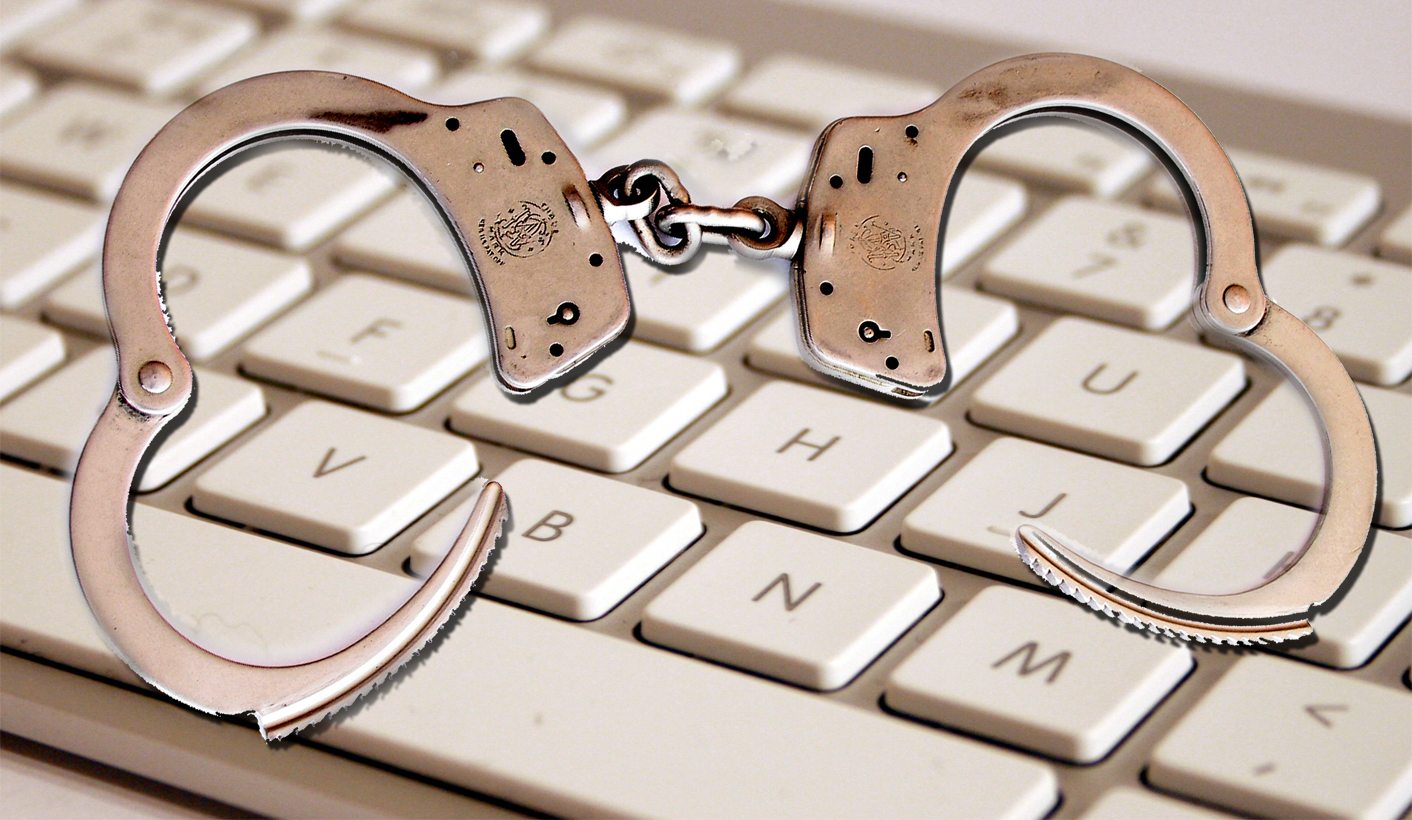 At the end of June, a magistrates’ court in Gauteng convicted a former Sowetan journalist of criminal defamation, with a sentence of R10,000 or 10 months in prison, suspended for four years. Criminal defamation has seldom been prosecuted in post-Apartheid South Africa, and this appears to be the first time since the advent of democracy that a journalist has been convicted of the crime. Now there are fears that, if nothing else, worries about being prosecuted for criminal defamation may lead to more tentative journalism. By REBECCA DAVIS.

In 2009, Sowetan journalist Cecil Motsepe wrote a series of articles about a Gauteng magistrate called Marius Serfontein. Serfontein, Motsepe claimed, was abusing his position in order to protect a white friend with a history of assaulting black employees. In other articles, Motsepe explicitly claimed that Serfontein was meting out different punishments to black and white defendants: “Blacks apparently have been receiving harsher sentences, while many whites escaped with suspended sentences when found guilty,” Motsepe wrote.

One of these articles apparently appeared on the Sowetan’s front page, with a picture of magistrate Serfontein. Serfontein was not amused and decided to seek legal redress, but instead of pursuing a civil action, as would be more common, he chose to go the criminal route. An advocate who has worked on similar previous cases described this choice to the Daily Maverick as “slightly odd”, given that it would be easier to secure a conviction in a civil case as the onus of proof is lesser. It may simply have been that the magistrate did not wish to deal with an adverse costs order if the case didn’t go his way. If he lost in a civil case, he would have to pay the costs from his own pocket.

Whatever the reason, Motsepe was prosecuted for criminal defamation. This crime is defined as “the unlawful and intentional publication of matter concerning another which tends to injure his reputation”. It is normally also required that the injury to reputation be serious. In a 1922 ruling in South Africa, the judge noted that “the practice has been to confine criminal proceedings to serious and aggravated cases”.

Where civil defamation suits have been brought in the past, their impact has sometimes been lasting. In an interesting paper on press freedom in South Africa, Professor Victoria Bronstein notes that during Apartheid South Africa a defamation conviction contributed to the downfall of the Vrye Weekblad, after the newspaper lost a case defending their publication from allegations made against lieutenant-general Lothar Neethling. A SAPS informant had told the newspaper that Neethling had supplied poisons for political assassinations, but the court would not accept the informant’s word alone and the newspaper had no other solid evidence to prove the allegations.

“The strict terms of the Neethling judgment were perceived as a major inhibition on freedom of expression in South Africa,” Bronstein writes. “The approach in Neethling gave maximum protection to the plaintiff’s reputation at the expense of the newspaper. Consequently editors were warned to be super-cautious when making decisions.”

In post-Apartheid South Africa, the ruling in Holomisa v Argus Newspapers Ltd (1996), another civil defamation suit, gave editors reason to breathe a little easier. There, the judgment held that newspapers could avoid liability for damages if they could show that the decision to publish had been made in a reasonable manner. In other words, journalists had good reason to believe their facts were true at time of writing and had taken steps to attempt to verify or disprove them.

In the recent case involving Motsepe, Serfontein specifically objected to one article in which Motsepe alleged Serfontein had given a white woman convicted of drunk driving a lighter sentence than one doled out to a black man convicted of the same crime. This charge turned out to be incorrect.

A necessary element for a criminal defamation conviction is that the court must be satisfied beyond a reasonable doubt that the accused had the intention to defame the complainant, rather than merely acting out of negligence. In a press release distributed after the ruling, Motsepe’s lawyers Webber Wentzel wrote that his defence was based on the argument that Motsepe did not intentionally set out to defame Serfontein because he believed that the facts were correct. His defence also stated that Motsepe took steps to verify the accusations, including presenting them to Serfontein for comment prior to publication. Serfontein allegedly declined to comment.

“The Court, however, found that Motsepe had acted recklessly in writing the article, and that he had approached the story with preconceived ideas of racism on the part of Serfontein,” Webber Wentzel wrote. (Motsepe may have had reasonable grounds for this suspicion, incidentally, as he had previously reported that Serfontein was being moved off all cases in which blacks were complainants and whites were the accused, which was apparently confirmed to Motsepe by the NPA’s chief prosecutor for the area of jurisdiction.)

“The Court went on to find that Motsepe seemingly did not want to hear the truth and accordingly proceeded to write the article without exhausting all the steps he could have taken to determine the truth of the allegations,” Webber Wentzel reported. “His conduct was therefore found to have been unreasonable.” Motsepe is appealing the decision, but for the time being faces 10 months in jail or a R10,000 fine, suspended for four years.

Current Sowetan editor, and the new chairman of Sanef, Mpumelelo Mkhabela, told Daily Maverick on Sunday that Motsepe left the newspaper in 2011, voluntarily, and is no longer working as a journalist. Mkhabela said that the case’s outcome was extremely troubling to the newspaper.

“When the lawyers informed me of the outcome I immediately said ‘let’s appeal the matter’, and they lodged the appeal, and we have been given the right to appeal,” said Mkhabela. “We are hopeful that we are going to win it, because if not journalism is in big trouble. The consequences will be quite chilling if courts are going to entertain these charges.”

Media freedom activist and campaign organiser for the SOS Coalition Sekoetlane Phamodi is inclined to agree. “This is really an interesting and important case for media freedom, whistle-blowing on issues in the public interest and the preservation of reputational interests, all of which are important things,” Phamodi told Daily Maverick.

Phamodi points out that investigative journalists seeking to expose wrongdoing often “rely on pieces of information which, although insufficient to prove an allegation, are enough to legitimately necessitate a full inquiry into the allegation, and in the public interest.” As example, he cites the case of the Sunday Times allegations against communications minister Dina Pule, almost fully vindicated by the subsequent parliamentary inquiry.

“Now, supposing the circumstances of the Pule case been materially similar to the Motsepe case, and the Court had followed the same logic,” says Phamodi. “The lead journalists on that story might have been criminalized for seeking to expose extensive impropriety and the abuse of power to the detriment of the public.”

Professor Bronstein similarly writes about the gagging effect that defamation law can have on media: “Certainly false information is less likely to be published. The difficulty is that true information that is of compelling public importance is also less likely to see the light of day.”

Motsepe’s law firm Webber Wentzel has a further issue: “Our view is that the crime of criminal defamation may well be unconstitutional, particularly when applied to the media,” their press release states. But in fact this very idea has already been aired in the South African courts, in the 2008 case of Luzuko Hoho v the State. In this case, the Supreme Court of Appeal considered an appeal against a conviction of criminal defamation by specifically attending to the question of whether defamation was a crime in line with the Constitution.

The case focused on an appellant accused of having made and distributed leaflets in 2001 which alleged various improprieties on the part of the Eastern Cape premier, the safety and security minister and the health minister, to name a few. The leaflets charged that these individuals had been involved in “corruption, bribery, financial embezzlement, sexual impropriety, illegal abortion and fraud”. The appellant denied he was the author, but the original court found that he was indeed the author and that the statements met the threshold for criminal defamation.

In the appeal ruling, judge Piet Streicher wrote: “the right to freedom of expression is not restricted to correct or truthful information because errors are bound to be made from time to time and to suppress the publication of erroneous statements on pain of penalty would of necessity have a stifling effect on the free flow of information.” He noted that the difficulty was in striking an appropriate balance between freedom of expression and the value of human dignity. Ultimately, however, Streicher found that the concept of criminal defamation was not inherently out of synch with the Constitution.

An advocate who works in this area, who asked to remain nameless, said that he thought the Hoho judgment had much to recommend. “What is there inherently about criminal law that is so chilling and has such a negative effect that it would be unconstitutional?” he asked. “It’s an arguable proposition, but by no means clear-cut.”

One reason he feels that the charge would survive constitutional scrutiny is because of the defences available to those accused of criminal defamation. These defences were entrenched by the ruling in a 1998 case, National Media Ltd and others v Bogoshi, which media lawyer Dario Milo described as a “landmark decision” which “significantly altered liability of the media in defamation actions”.

In that case, much like the earlier Holomisa v Argus Newspapers Ltd ruling, the court held that “the publication in the press of false defamatory allegations of fact will not be regarded as unlawful if, upon a consideration of all the circumstances of the case, it is found to have been reasonable to publish the particular facts in a particular way and at the particular time.”

Sowetan editor Mkhabela expressed concern to Daily Maverick that the Motsepe ruling would appear to be a “reversal” of the Bogoshi ruling, although it’s important to note that the wider implications of a magistrate’s ruling are limited.

“It can’t change the law, but it might send a bad signal,” the advocate summed up. But, he says, “it’s certainly a serious issue that we should all be talking about.” DM