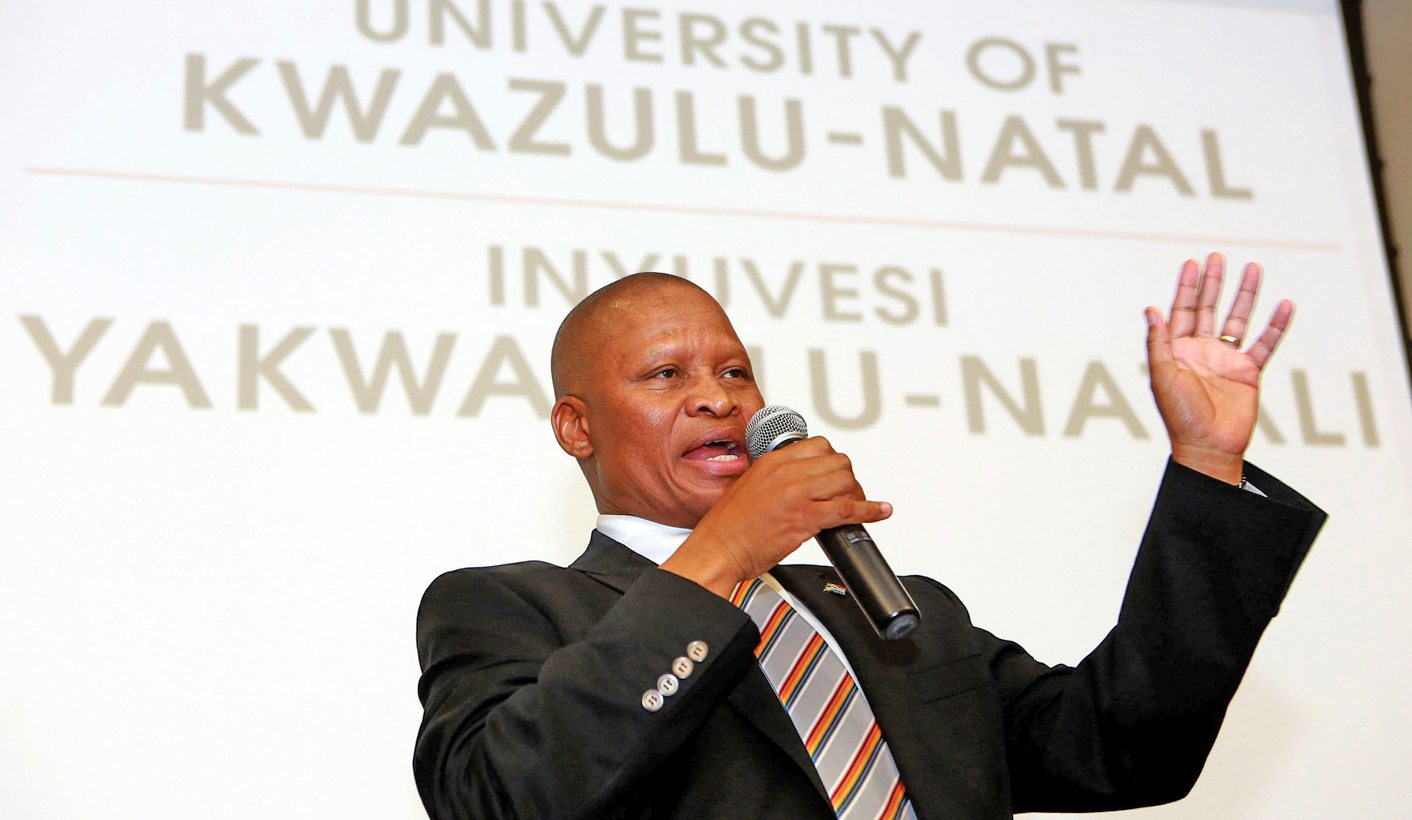 It emerged over the weekend that the Higher Education Transformation Network (HETN) has now lodged a complaint against Advocate Paul Hoffman, over what it says is a series of "cowardly politically motivated attacks" on Chief Justice Mogoeng Mogoeng. The reason for its ire is the fact that Hoffman, through his organisation, the Institute for Public Accountability, has now claimed that Mogoeng could be "guilty of contempt of court", and thus the Judicial Service Commission must investigate if he must be removed from office. What a stupid waste of time and the dual exercise in futility this all going to be, and how distracting it will be from the issues that really matter in our legal system. By a thoroughly unimpressed STEPHEN GROOTES.

Followers of the various racial disputes in our judiciary must be wondering if there’s something in the judicial waters of our country that makes everyone fight so much. And refuse to give in. Maybe no one has the EQ to remove their egos and simply find a solution.

On Tuesday, Hoffman went to the JSC, and lodged his complaint against Mogoeng. The two are old adversaries, and Hoffman was one of the biggest critics of President Jacob Zuma’s decision to appoint him Chief Justice. (This writer was also unhappy with the choice.)

But Hoffman’s reason for this complaint lies in a speech given by Mogoeng to the organisation Advocates for Transformation last month. In that address, Mogoeng referred to recent events and suggested that “these developments seem to suggest that war has been declared against transformation. People are clutching at straws to discredit the JSC. They seem to want the JSC they can dictate to. The same people or organisations who are accusing the JSC of being controlled by politicians are beginning to look like they want to control the JSC themselves.”

In short, his claim is that there is a group of people, protectors of white male privilege if you will, who are now trying to stop black people from becoming judges. They want white men to be judges instead.

Now, all of this is, in a way, going to be the subject of a court case soon, in that the Helen Suzman Foundation is shortly going to court to argue that the JSC has been wrong to continually overlook Advocate Jeremy Gauntlett’s nomination to be a judge. Their claim is going to be that Gauntlett is simply such a good candidate, that he cannot be overlooked, no matter what he looks like in the mirror.

Those with long memories will know that Gauntlett has appeared before the JSC  several times, has worked as a judge in several of our neighbouring countries, and has a CV as long as Julius Malema’s charge sheet. The last time he was overlooked, the JSC said it was because he lacked “judicial temperament”.

Hoffman’s claim is that because Mogoeng has spoken on this issue in public, his views on this are now known. And because he’s Chief Justice, it means that a lower court would now know his views, and so act accordingly. And thus he’s guilty of contempt of court.

Now, I’ve sat through some seriously complicated proceedings in my time. But this is a stretch. A stretch too far. It’s almost as much as a stretch as the JSC’s reasons for letting off Judge John Hlophe the first time round. Surely our judges in lower courts are made of sterner stuff not to be cowed just because they know the view of their Chief Justice. (It’s not like they will all like and approve of him anyway.) They would know that they can rule how they way they deem correct. If the case is appealed (and being driven by males, it will be) then so be it. It will go to the Supreme Court of Appeals, and they can decide, and take over the responsibility for it.

And if the case does go to the Constitutional Court, well Mogoeng would probably have to recuse himself anyway as a result of these comments. This would actually strengthen the hand of those like Hoffman, as Mogoeng would lose his judicial vote in this case.

The problem with Hoffman’s claim is that it seems to be very weak on the law. This means we, and others, must question his motives. And Mogoeng will be right to claim it’s personal. There’s certainly some evidence for him to use to back this up.

But the real question then is will Mogoeng stop there, or will he go a bit further into the  political realm? Will he say that Hoffman is just an agent of reactionary forces, he’s just a representative of this group of white men who are lawyers who are attacking him at every turn? Will he then turn the claim around, and say that Hoffman’s attacks prove all white men are racist, or, if he doesn’t go that far, use it to say that every attack against him is driven by racism?

There will be those that say, quite rightly, that as Chief Justice Mogoeng has a duty to give only the bare minimum defence. Say only that he’s a victim of a vendetta by Hoffman, and leave it there. But Mogoeng’s supporters could also say, quite rightly, that a group of people have hurled abuse at him at every turn, that he’s been attacked unfairly, since literally the day he was nominated for the post. And thus why should he be so gentlemanly about it? After all, the future of transformation is at stake here.

It would be hard to criticise Mogoeng for using every argument he has coming his way. And that because Hoffman has crossed the line, he is no longer prosecuting Mogoeng, but persecuting him.

In almost all fights, be they legal, political or physical, it’s important to choose your ground carefully. In this case, Hoffman has simply chosen the wrong argument. If he really wanted to go after Mogoeng, he could have waited for him to do something that really is impeachable.

And now, thanks to the HETN, we are going to have another racial war in the judiciary on our hands. People may be sucked in, and be forced have to take sides. And nothing will really be accomplished.

In judiciary today, we have some real problems that need to be sorted out. Someone needs to grasp the Hlophe nettle for a start, and find a resolution to that. We need a serious discussion, in public, about the relationship between perceived excellence and transformation. And more than that, we need to change legal briefing patterns, so that more and more black lawyers are given all the chances they need to show they can be trusted with the most important cases, by the biggest clients. (While we’re here, government should be the first to start this process).

Changing and transforming the judiciary was always going to be difficult. The battle between Paul Hoffman, Mogoeng Mogoeng and the Higher Education Transformation Network has a potential to set us back many years. There are now too many egos involved, and makes one wonder if we’ll ever be able to put this all behind us. DM