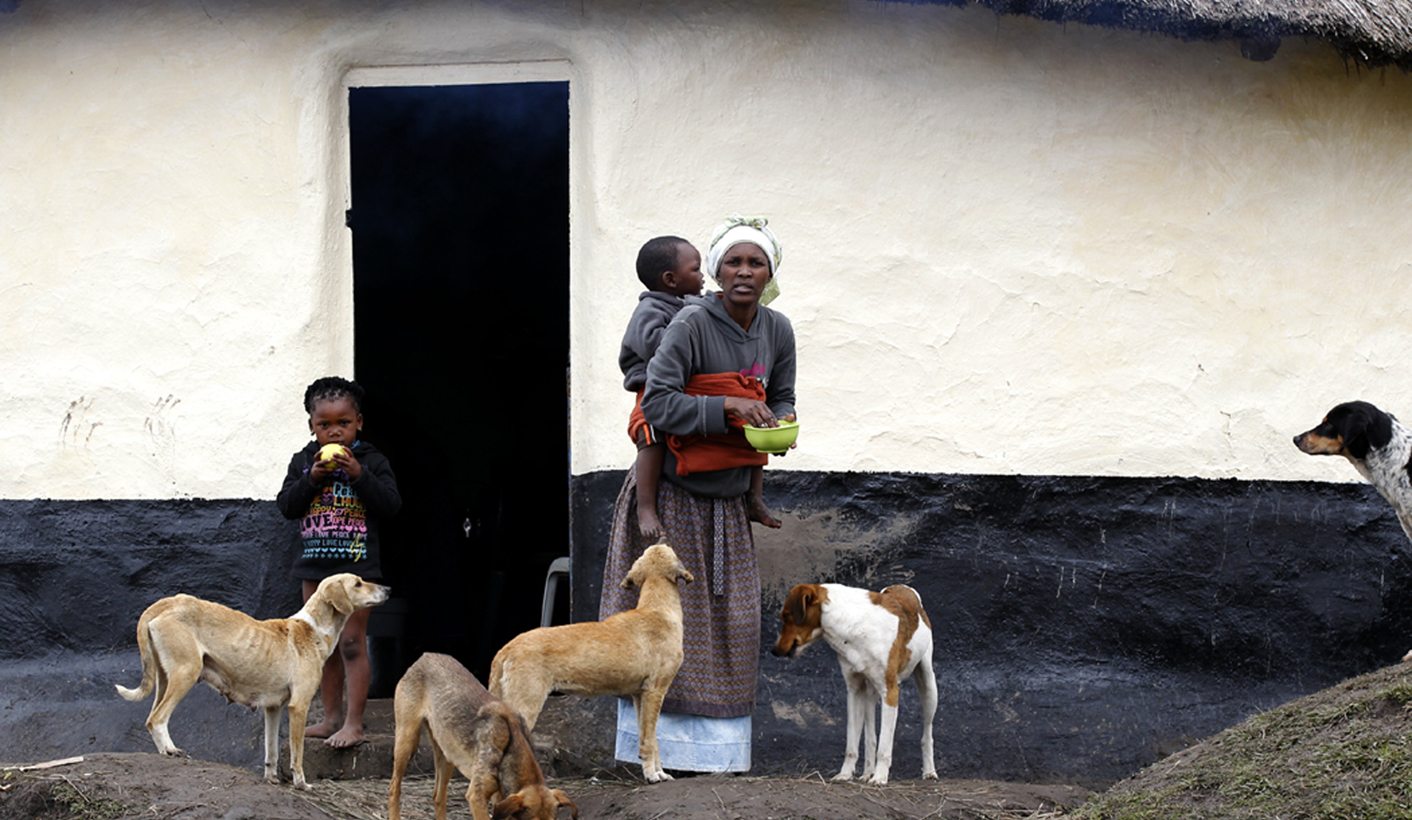 With the release of the South African National Health and Nutrition Examination Survey, MARK HEYWOOD of SECTION27 examines the issue of one of the most fundamental human rights: food. With the help of Dickens, of course.

One of literature’s most celebrated depictions of child hunger, poverty and orphanhood will always be found in Charles Dickens’ 1838 novel Oliver Twist. In 1968, this work was turned into the sentimental, but beautiful, musical Oliver!, which commences with the haunting opening scene and song “Food, Glorious Food”, in a verse of which the workhouse orphans ask/sing:

Why should we be fated to

Do nothing but brood

Dickens’ images of child suffering inhabit the psyches of all those fortunate enough to have read his works and his novels have sometimes led to an outcry and impetus for reform. One wonders then, what the old man would have thought if he’d known that two centuries later the situation remains little better, and often worse, in many countries of the world.

Last week saw the release of the South African National Health and Nutrition Examination Survey, a new report by the Human Sciences Research Council (HSRC). The researchers examined a range of bad behaviours (from smoking and alcohol use to exercise) and include a section on food “habits” and their consequences.

These are some of the facts that it unearths:

What do these statistics mean? They mean that there are a hell of a lot of people out there who experience the pangs of hunger, and many of them live around you, in cities and townships, not just in rural areas. Hunger is both a physical and mental deprivation. As Oliver’s orphan’s sing, it’s about brooding on food. But it also impacts drastically on health and quality of life.

In radio discussions after the report was publicised a high level of ignorance was displayed about the impact of poverty on food habits. Many callers questioned (sometimes with genuine ignorance and at other times with what appears to be ill-concealed judgment about the unhealthy choices made by the poor) how we could be a country that exhibits both obesity and malnourishment at the same time. The answer, obviously, is that poor people generally have bad diets. “Allow not nature more than nature needs” and people buy what they can afford and what fills their empty stomachs, if not their nutritional requirements: cheap but filling starch-based staples and fast food that are greasy, fatty, sugary and salty. All this contributes to both obesity and malnutrition. It also contributes to ill-health and provides just reason for the minister of health to want to regulate fast food manufacturers as well as alcohol, which plays a good role in dulling hunger and a bad role in diverting money that could be spent on food.

Incidentally, this form of regulation is not about limiting individual choice, as the Free Market Foundation would have us believe. Quite the opposite. It is a lack of real choice and information that marches people into the arms of cynical fast-food producers.

The report examines child and adult hunger separately. But in reality they are inextricable. The adults who can’t afford to buy good quality or sufficient food in our four supermarket chains are the same adults who can’t give their children lunch boxes to take to school (reported as 51% of all children) because there is no food in the house. Combine this with the finding that 33.9% of children reportedly don’t eat breakfast for the same reason and you realise that there are a lot of hungry kids prowling our streets.

Thank god, according to limited research done by SECTION27 and a fair amount of anecdotal evidence, that the National School Nutrition Programme (NSNP), which now feeds around 9-million children a day, seems largely to reach its intended beneficiaries, even if the quality and type of food served is not always in line with policy. The programme might be the only part of the education system that works.

But there’s limited comfort to be had in this success. Food insecurity and malnutrition hit long before our young one’s set foot in a school, and their results last long after they have left. According to the report 26% of one to three year olds experience stunting, and 9% experience severe stunting. The United Nations Children’s Fund (UNICEF) defines stunting as “low height for age caused by long-term insufficient nutrient intake and frequent infections. Stunting generally occurs before age two, and its effects are largely irreversible. These include delayed motor development, impaired cognitive function and poor school performance.”  Put simply, children who get insufficient micronutrients will be mentally and physically impaired for the rest of their lives. They will earn less that their more privileged peers purely because the development that was supposed to take place in their early years, didn’t.

And here’s the rub. The Economist points out “[p]aradoxically, malnutrition can also cause obesity later in life. In the womb and during the first couple of years, the body adjusts to a poor diet by squirreling away whatever it can as fat (an energy reserve). It never loses its acquired metabolism.”

Do you, dear reader, find this acceptable? “Of course not,” you say.

While you think about it, let me revert to Dickens and the Constitution. In his novel Bleak House you get the sense that Dickens uses the death of Pip the street sweeper to offload his anger about the death of children all over England:

“Dead, your Majesty. Dead, my lords and gentlemen. Dead, Right Reverends and Wrong Reverends of every order. Dead, men and women, born with Heavenly compassion in your hearts. And dying thus around us every day.”

Unfortunately, it seems that his anger, and the anger that has continued over the centuries, has done little to eradicated the crocodile tears and hypocrisy made evident by hunger. Is there anything more we can do today?

Well, we could if we wanted to.

Our supreme law, the Constitution, says that everyone has a right to “sufficient food”. In the face of such widespread denial of food it is time someone asked the Constitutional Court what that means. Whilst we appreciate our government’s kindness through its food parcels (especially around elections), the relief of distress grants and the NSNP, these are not sustainable, satisfactory or dignified ways of dealing with hunger.

The answer we expect from the Court is not that hunger is an unavoidable by-product of poverty. We know all about poverty – there’s too much of it. But as we struggle to climb out of poverty (hard in the midst of corruption and nepotism), what do we do about food? And what are the models for countries, or provinces, or cities very concretely grappling with this problem?

The Constitution says food is a right. So is health. In fact the two co-exist in section 27 of the Constitution. Because we accept that access to health care services is a human right, we have agreed that that the price of medicines should be reasonably controlled. The Constitutional Court has even gone so far as to state that it is a governmental duty to ensure medicines are affordable. So why does the same reasoning not apply to food?

Access to food is not just about production (which is largely how it is seen by policy makers who plough money into small farming operations, but leave the food industry to regulate itself) but also about the ability of households to buy food.  In South Africa, the ability of households to buy food is in the hands of our big four supermarkets (Pick n Pay, Shoprite, Spar, Woolworths) who now control 55% of the retail food market and consequently have a stranglehold over food production and prices in South Africa. Are they taking this responsibility seriously?

Admittedly, it’s not just about the food companies. There are multiple overlapping factors. Poverty, inequality, ignorance, advertising, pricing, agriculture, unemployment, corruption. But the bottom line is that there are 12-million people who are hungry now. Is this not good cause, at least, for a commission of enquiry into food, hunger and what we can do about it?

As our middle class laments the aging of Mandela, if it truly celebrates his spirit and convictions it should get out of its plenty trap and demand concrete measures for those in the poverty trap. As for the poor and hungry, it’s time to wake up and demand the coffee. DM

Photo: A woman is surrounded by dogs as she prepares food in Mqanduli outside Mthata in South Africa’s Eastern Cape province, September 8 2012. REUTERS/Siphiwe Sibeko